In a West Side neighborhood long isolated from the rest of Manhattan, crowds gathered on Sunday for a truly rare sight in New York City: the opening of a new subway station. Train aficionados and local families streamed in, squealing in delight and snapping photos of the city’s first new subway station in a quarter century

by Hamilton Express
Mon Sep 14, 2015 8:22 am
I went there yesterday, and it was very nice! There were tons and tons of railfans present, even some notable ones. Some had come as far as Philadelphia to attend the event. It was great. There was even an R62A that rolled into that stop that I rode on (from Times Square).
<1> Hamilton Express (Fantasy)
Rush hours runs express between 137th Street-City College to South Ferry.

Not very good ones, but yes!
It was really hard to keep still because there were so many people..
unnamed (1).jpg
unnamed.jpg

Note:
I'm figuring out how to add photos, so these may not work...
You do not have the required permissions to view the files attached to this post.
My RP

About those inclined elevators. Just like regular elevators on the inside?


Now, can they add another stop between TS and this station to better serve the west side?

Where does the track actually exist underground? Could a stationhead actually pop up at 10th and 39th, for instance? Or at least at 11th and 42nd, if the rails are that far north?

Rbts Stn wrote:Great to see a new station in my lifetime!
Now, can they add another stop between TS and this station to better serve the west side?

Where does the track actually exist underground? Could a stationhead actually pop up at 10th and 39th, for instance? Or at least at 11th and 42nd, if the rails are that far north?

I think it was at 10th and 41st. It was I think originally just to be a shell, to be fitted out later when $$ were available, but even that got cut back. As a minimum I believe they graded the line so the station could be built later. Somewhere recently I saw detailed drawings from an earlier plan with a lot of detail. Others here will know more or look in past posts. Some of the politicians were making noise about it again at the celebrations the other day, but finding money for that and 2nd ave??? I doubt it..
JS
EDIT: From the first page of this thread (start looking at page 19 of the following pdf): http://www.nyc.gov/html/dcp/pdf/hyards/hy_chap2_g1.pdf" onclick="window.open(this.href);return false;

10th and 41st feels too close to Port Authority to me to have made as much sense as a little further south, but it would help.

And darn, but if they could use those tail tracks to extend a station to 24th and 11th!

by bellstbarn
Sun Sep 20, 2015 11:02 am
Because others have posted on various websites interior shots of the beautiful, elaborate 34-Hudson Yards #7 station, I have tried to take street-level photos that show the placement of its entrances. The city did not place entrances at the four corners of 11th Avenue and West 34th Street. Instead, there are two entrances within parks a block east of Eleventh Avenue at a new street named Hudson Blvd East. The 35th Street entrance is not yet open. The open entrance (and presumably the main one) is on the south side of 34th Street. 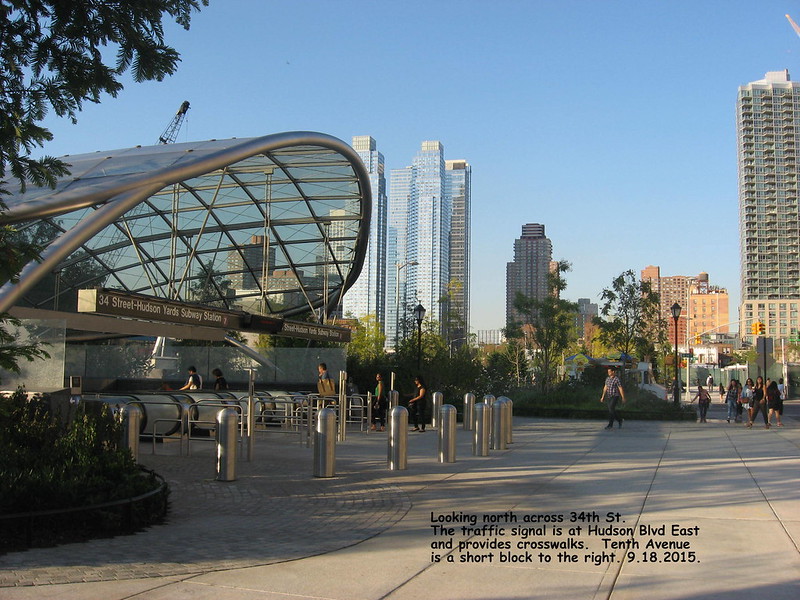 To help orientation, please note the Sabrett hot dog truck on 34th Street in the photos above and below. 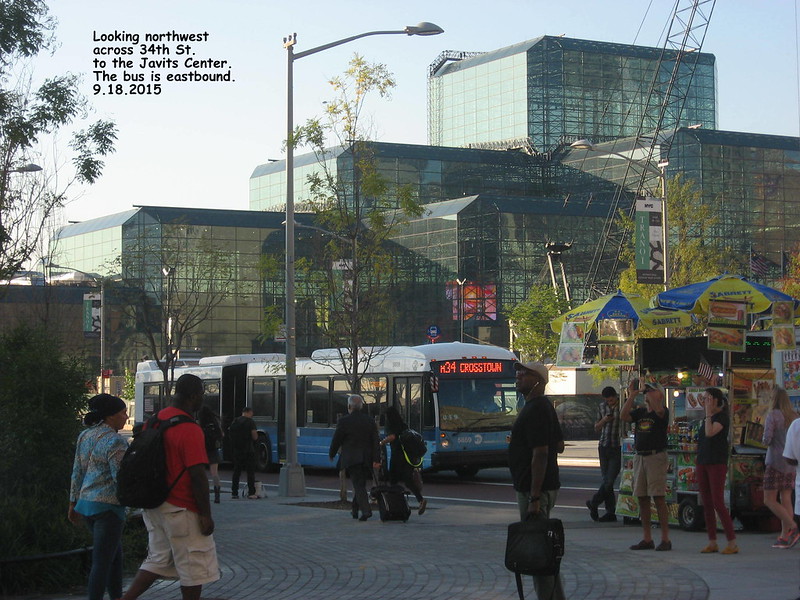 The size of the Javits center makes it appear closer than it is. It is on the west side of Eleventh Avenue. The new subway platform is 125 feet below Eleventh Avenue, but the escalators bring exiting passengers east as they ascend to street-level. 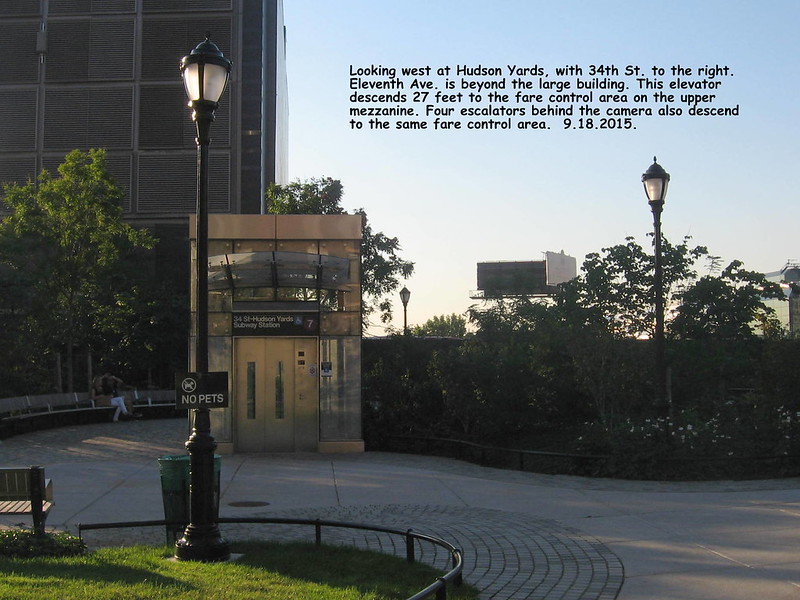 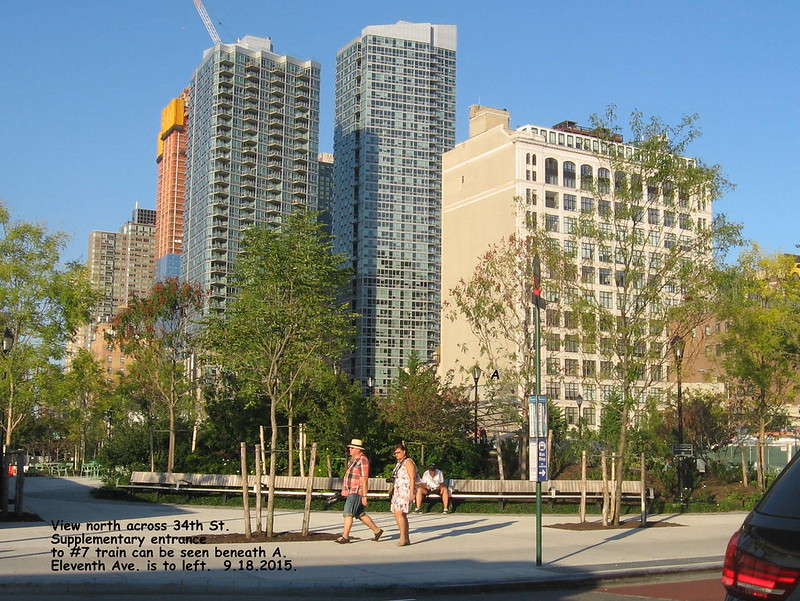 The subway exit/entrance marked by my letter A is still under construction. A stop of the westbound M34 can be seen at the curb. The eastbound M34 has no stop convenient to the #7 exits/entrances. Presumably, not many passengers will not transfer between bus and subway as each is a crosstown route on different streets. Megabus drops its patrons along 7th Avenue. The Megabus stop west of Eleventh Avenue, a curbside departure point for distant cities, offers no protection against wind and weather. 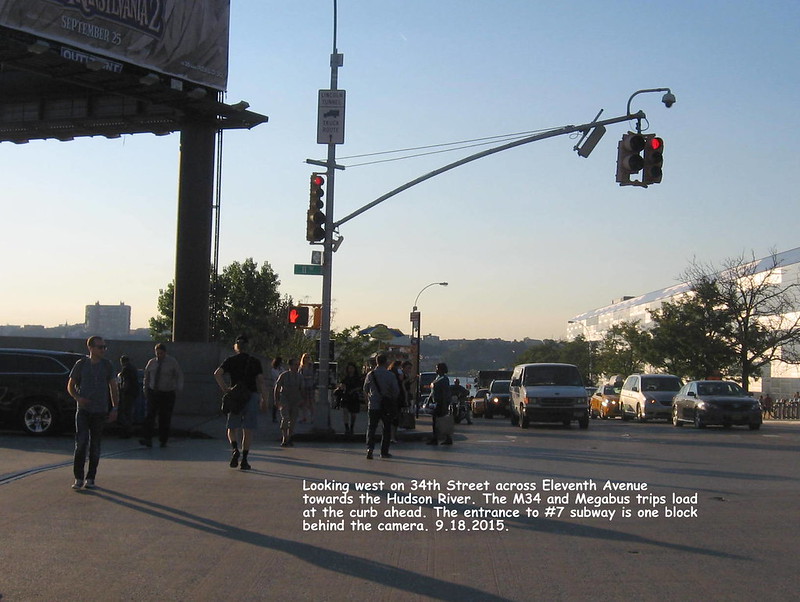 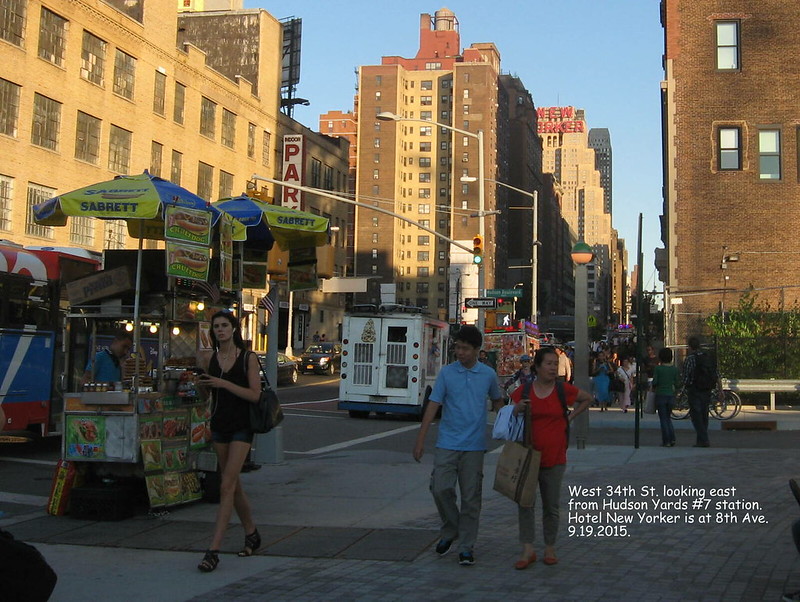 In the above photo, note the green-topped globe indicating a staffed subway entrance. The fare control level even has lavatories!

Rbts Stn wrote:Are the "inclinators" before or after fare control?

by bellstbarn
Mon Sep 21, 2015 4:25 pm
You must pay fare to ride the inclined elevators. Explanation: Four parallel escalators bring you from the street down to the fare control. Straight ahead is the "railroad agent," "token booth," now the Station Service Center. To the right of that booth are the turnstiles. Once through the turnstiles you can choose to descend by either the long escalators (3 parallel) or the inclined elevators.
I did not notice the Retail Concession Area. The MTA website says it's behind the Station Service Center.
The ride down on the escalator made me feel slightly like I was going to pitch forward. I tried to measure the speed of the handrail in relation to the speed of the steps. It seemed the same rate. A long time ago, I was told that downward escalators had handrails that pulled people slightly back, not forward.