What are your interests in the L&HR?

What are your interests in the L&HR?

What are your associations or allegiances with the L&HR? Did you grow up around the ROW? Ex-employee? A relative? Just a railfan?

I grew up in Chester, Greycourt specifically. I would see the trains pass on a daily basis. I lived a stone's throw away from the interchange yard with the Erie. I was born in Warwick and still have several relatives there. My great-grandfather, Albert Hann, was Road Foreman. My grandfather, Bob Hann, worked for the L&H from '39 to '79. I want to say he became an engineer around 1942. My dad is an ex-employee as are at least two of my uncles.

Username
rfalcone
Posts
35
Joined
Tue Mar 16, 2004 8:03 am
Location
Pearland, Texas
by njmidland
Wed Mar 31, 2004 8:37 am
I grew up in Blairstown and remember seeing the L&HR on trips to Belvidere and Great Meadows. In the early 80's I met Gifford Moore and help sort through the material in the Warwick headquarters building. (Much of my paper collection resides in an L&HR file cabinet I bought at the L&HR aution in 1982).

Currently I am involved with the joint New Jersey Midland RHS/Allamuchy Township effort to restore the L&HR freight house. On occasion we hope to have L&HR exhibits on display.

Username
njmidland
Posts
311
Joined
Fri Mar 12, 2004 8:30 am
Location
NJ
by Urban D Kaye
Wed Mar 31, 2004 9:44 am
I spent many childhood summers (1974-79) at my grandparents' trailer home along the Delaware at Hutchinson NJ. Even after the switch to Conrail, the L&HR's Alco Centuries could still be seen rumbling down toward P'burg from Belvidere. I was the little fat kid in plaid pants running alongside the ROW with his POS camera.
-Charlie 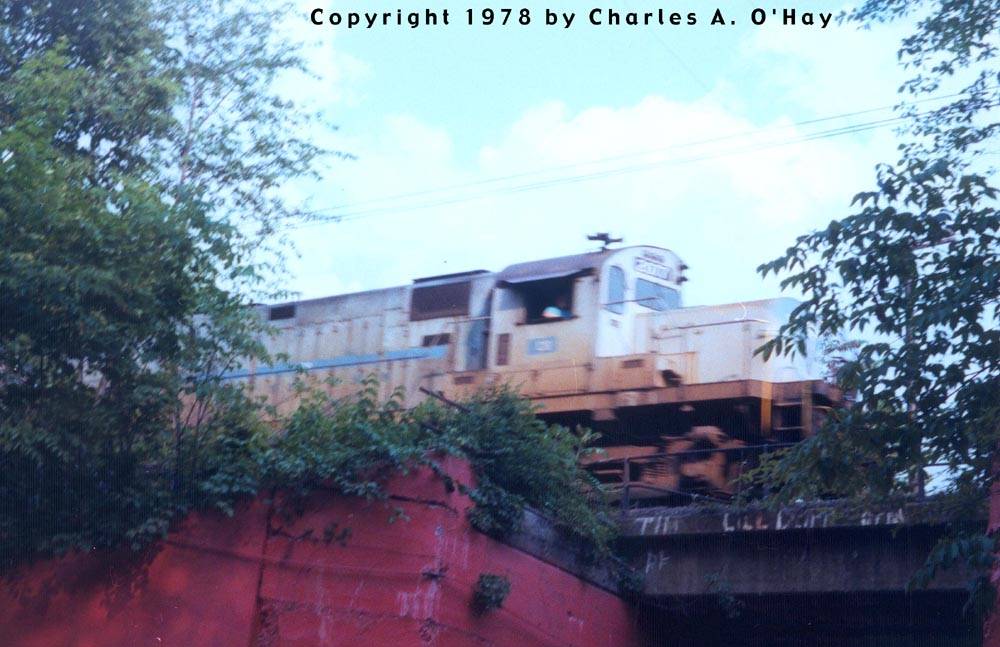 Username
Urban D Kaye
by wess
Fri Apr 02, 2004 6:27 pm
I actually have never been in L&HR country. I had started getting issues of Railfan and Railroad, and one of the back issues I,d ordered had an article on the L&H. This seemed to me to be a quaint little railroad and at the time I,d read of this railroad. I was still a teenager living in northwest Kansas and watching Rock Island trains rolling thru my home town.
Years later, after I got out of the service and living on the left coast and discovering the internet. I looked up any references I could on the L&H. I,m sorry I missed those days when it was a going railroad. This line and and the Rutland probably influenced my interest in shortline railroading the most

You coulda told me the L&HR was an eastern giant with over 2500 miles of track and 300 locomotives and I'd have believed you. Only later did I realize how lucky I was to have a front row seat at the Alco show put on by this tough little railroad.

Guess I might as well 'fess up to my hobby association with the L&HR. Like the railroad, I call Warwick, New York home. We were both born here; it was headquartered here for its full life, and I'm a lifelong resident. I was a couple of months shy of four years old when the RS-3's replaced the steam power- and have a few visual memories of steam running in town. And with the exception of about a year ('49 into mid '50), have lived no more than a block from the tracks. Most of that time was (and is) in easy walking distance of the yards.

In the fifties and sixties, the L&HR was the largest employer in town, by far. At least a third of the kids I was in school with had fathers (or mothers) who worked for the railroad. That included everything from President, Superintendant, Mechanical Superintendant, on down through secretaries, dispatchers, engineers, conductors, shop mechanics, MOW people, laborers...

So- the L&HR has 'always' been a part of my life (and no, I never worked for them). As 'fan-friendly' as its reputation has always been, it was even better for a local kid who they knew. It would never happen today, but we were pretty much given free reign around the yards and shops- especially as we got older. Of course, we respected the potential dangers, stayed out of the way, and didn't do anything stupid. Cab rides with hostlers, riding the turntable, starting a dead RS-3, even running one for short distances. And, all this within sight of the headquarters office building. Like I said, unthinkable in today's world, but back then it's pretty much the way things were.

(Given this background, it should come as no surprise that I am NOT a big fan of Conrail, or the PC before it.)

I've never gotten nutso about it, but I've been accumulating L&HR 'stuff' for about 40 years, and photographing it on and off for about the same time frame. I've had the good fortune to have contributed to both Ed Crist's and Jim Boyd's L&HR books, and once I kinda figured out the Web and html, started on a Lehigh and Hudson River website (and yeah, I know better than anybody that it's been about two and a half years since I've updated it. It's NOT for a lack of raw material; procrastination has always been one of my strong points...)

Username
Marty Feldner
Posts
397
Joined
Thu Mar 11, 2004 7:50 pm
Location
Warwick New York
by MR.C-420
Wed Apr 07, 2004 5:02 pm
I grew up in Franklin, and born in 1962, I had a chance to witness at least the last few years of the L&H operating as a real railroad, before the bridge fire. I was lucky enough to go to the catholic school right next to the mine branch in Franklin,in 1st-3rd grade, 1968-71, and at recess I would run over to the fence and look down the cut on top of the passing trains going to the zinc co. My dad was not any kind of railfan at all, but he humored me, and any time we were outside working in the yard or something, we would hop in his jeep and rush down to the junction,(thats what all the locals still called the Franklin yard where the mine branch split off)whenever we heard a horn and hope we catch the one light in town green (no right on red in those days) and see a train. When I was old enough I rode my bike down there and spent a lot of time hanging around the tracks talking to employees(always friendly). That area has a very empty feeling now.

Username
David
Posts
704
Joined
Thu Mar 11, 2004 7:28 pm
Location
Naples, Florida
by MR.C-420
Thu Apr 08, 2004 8:04 pm
David,
Yeah, I have a few photos,(but mostly slides) and would be glad to share them, but I wouldn't know how to go about sharing them, I having trouble just trying to figure out this site with all the changes. I not that computer savy and I still have'nt figured out what the hek I'm doing yet.

What interests you on L&HR

by gawlikfj
Mon May 17, 2004 4:16 pm
I am interested with the L&HR and its journeys into Maybrook Yard.
Haven't seen alot of pictures of the L&HR in Maybrook Yard.
Does anyone have any to share?

Username
gawlikfj
Posts
303
Joined
Mon May 17, 2004 4:05 pm
Location
Connecticut
by L&HR C&S
Mon Jul 05, 2004 6:23 pm
My memories of the L&H are from my childhood days growing up in the Andover area. After school I would help my father cut the grass at the JJ Giamavo cheese factory on Whitehall rd.. We would hang out with the night watchman when we were done. I was free to roam the whole factory, boiler rooms, loading docks and all. But the best part was sitting outside where the tracks ran alongside the factory. On hot, humid days the pole line would sway in the breeze as the skys darkened. I would place pennies on the rail and look down the track to see if the block signals at Trinka Airport had lit up yet. And finally a westbound train would make an appearence thru the tunnel under the Lackawanna Cut-Off. The Alcos with 20 of so freight would sail by and it would be over in no time.
What a way to get into the world of railroading!

by gawlikfj
Sun Jul 18, 2004 7:34 am
I like the way the L&HR was such a good railroad to the New Haven railroad.
The L&HR even offered to rebuild the Poukeepsie Bridge with its own money & men after it burnt in May of 1974.
To me this says they were a railroad you would be proud of.

All American Railroading at its best.

Username
BlockLine_4111
Posts
1939
Joined
Fri Mar 12, 2004 5:58 pm
Location
Northern NJ
by NJ Vike
Tue Mar 15, 2005 4:54 pm
While I was a late coming to Sussex County when the L&HR passed this area, I do know of several that lived here to witness these trains pass by. Besides photos, he has several L&HR lionel engines.

I have visited most of the active (NYS&W) and abandoned trails of the area.

I did visit the Maybrook area and visited the small but very informative train museum there and did find the old administration building (I ave pictures) and was really suprised to find the building and water tower foundation still there.

Ken
If you don't know where you're going, any road will take you there.