by Dave Keller
Tue Apr 18, 2006 7:44 pm
Electrification also extended from LIC yard to just east of Greenpoinrt Avenue, until 1951, when it was removed. 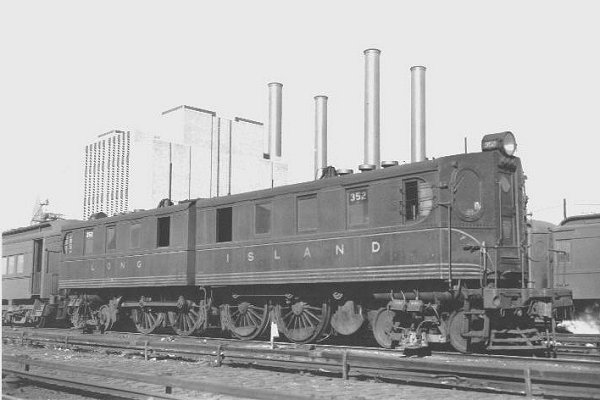 Username
Dave Keller
Posts
2057
Joined
Fri Mar 19, 2004 8:13 am
Location
Orlando, FL
by BMC
Wed Apr 19, 2006 12:18 am
To answer you Benltrain ... Long Island City and Richmond Hill are simply the only two designated diesel yards for the LIRR. The great amount of the LIRR's equipment is electric and runs through to Penn Station or Flatbush Ave. A lot of the diesel Jamaica finishes go directly to RH as the HPA trains come to LIC yard.

The diesel layups in LIC are serviced, fueled, cleaned and inspected there. Inspections, heavy repairs and total toilet service are done in RH. The Yardmasters of both yards discuss what trains need to cycle back to RH each morning and designate their equipment trains based on that and consist needs.

The four third rail tracks are more for that "safety valve" rather than layups. Even the one train in the morning and one in the afternoon is inspected and cleaned elsewhere and simply is a "turnaround" in LIC.

Dave ... Did you know that those beloved power plant smokestacks have come down as per New York City despite neighborhood attempts to save them. When I retired it sounded like they were going to build a skyscraper apartment building on the site.

Yes, another railfan acquaintance of mine gave me the bad news when it happened. Very sad. Such a landmark for so many years!

I'm really amazed that they left the one set of float docks!

Username
Dave Keller
Posts
2057
Joined
Fri Mar 19, 2004 8:13 am
Location
Orlando, FL
by Jo24Sam
Wed Apr 19, 2006 2:26 pm
This thread has sparked my interest in riding this line. But first, what is the likelyhood of a head end view (westbound)? I have yet to ride the new 'diesel' equipment so I have no idea what the head end view is like. Is it more like the M1/3 or more like the M7? Lastly what are the odds, with the car open, of a head end view? If the odds are good this is a new railfan opportunity to see head end the non-electrified territory.

Username
Jo24Sam
Posts
35
Joined
Thu Jun 03, 2004 8:48 pm
by LI Loco
Wed Apr 19, 2006 9:13 pm
When I worked at Fifth Ave. & 42nd St., I'd make it a habit to ride the Lower Montauk once a week to check out the action. The varied scenery made the ride worth while and once in a while I'd get a glimpse of CP or P&W power sitting in Fresh Pond. I gave it up after C-3 bilevels replaced P-72 coaches on the last train due to the extra distance we had to walk from the new platform.

Here's a shot I took near Glendale when I was a mere college kid:

A Ride on the Lower Montauk

by Ocala Mike
Thu Apr 20, 2006 1:10 am
That is a great shot at Glendale. Do you recall for sure that this train was an E/B? I always remebered the club car bringing up the rear, not the front, of the E/B trains.

The way LIC was laid out, the "clubbies" wouldn't have to walk as far from getting off the #7 train at V-J to land in their seats for the trip to Mill Neck.

I rode the Lower Montauk back in the day when there were all of two trains, and they made the intermediate stops (Penny Bridge, Haberman, etc.); believe they were OB branch trains back then, too. Didn't know I was on the Lower Montauk; just called it the LIC branch, and it was covered in the timetable called "City Zone", I believe.
Ocala Mike (formerly Hillside Mike and Deer Park Mike)

This was a railroad "tradition" where a consist was put together based upon class: 1st class cars came before 2nd class, etc.

The parlor cars were an "extra-fare" service, so they were placed ahead of the regular coaches.

When the Montauk parlor trains returned westbound, the engine was run around the train or turned on the wye, but the parlor remained in it's original spot and became the rear car.

The only exception to this rule was the open-end observation cars. They would be turned on the wye along with the locomotive because they were ALWAYS at the rear of the train.

This shot would be an eastbound one.

by Ocala Mike
Thu Apr 20, 2006 11:08 am
I am sure you're right about the Montauk trains, Dave, but I am equally sure that on the Oyster Bay branch, the private club cars were placed at the rear for the convenience of the Mill Neck customers.
Ocala Mike (formerly Hillside Mike and Deer Park Mike)

by henry6
Thu Apr 20, 2006 1:44 pm
Commuter parlor service had to differe from main line service (generic). Normally, the better ride was as far away from the engine --cinders, soot, noise (even in the diesel era)--so was usually placed behind the coaches and behind the diner thereby restricting those who would trapse through to sleeper and parlor ticket holders. But in commuter service there usually was neither the time nor personnell nor facilities to do that kind of change twice a day so one "end" of the train had to be where they were placed. That place was at the far end of the train from where the "headend" traffic would be. In NY metropolitan area the "headend" cars (baggage, mail, express) was on the outbound end of the train leaving the first class cars to be on the inbound end. Thus in NJ the "first class cars were on the east end of the trains with the baggage, et al on the west and on the LIRR, it was reversed. After that, it was all tradition.

Username
henry6
by BAR
Thu Apr 20, 2006 2:18 pm
Very interesting and thanks for all the information. I plan to ride the line when I am in New York in May. I have noted the eastbound leaves LIC at 4:54 PM. Does anyone know what time the westbound leaves Jamaica for LIC? Thanks very much.

This was a railroad "tradition" where a consist was put together based upon class: 1st class cars came before 2nd class, etc.

The parlor cars were an "extra-fare" service, so they were placed ahead of the regular coaches.

When the Montauk parlor trains returned westbound, the engine was run around the train or turned on the wye, but the parlor remained in it's original spot and became the rear car.

The only exception to this rule was the open-end observation cars. They would be turned on the wye along with the locomotive because they were ALWAYS at the rear of the train.

This shot would be an eastbound one.

Growing up in the 1960s on the South Shore, I frequently saw #9, the weekday afternoon train from Montauk to Jamaica. During summer (when parlors ran), it ALWAYS carried parlors right behind the headend cars (an RPO and baggage until 1964, a baggage afterwards). This train was depicted in a Howard Fogg painting that John Scala had made into prints a few years back (I have one hanging in my den.). On Sunday, trains the practice may have been different.

P.S. The train I shot in Glendale was an eastbound; probably around 5:30 pm

You may very well be right about the club cars.

I was strictly referring to the parlor cars. I have no recollections of where the club cars were placed.

What you're saying may be so on the old fallen flag roads of bygone days, but was not so on Montauk-bound trains during the late 1960s and early 1970s when I was photographing quite heavily.

Unless the train was all-parlor car, such as the "Cannonball" the parlor was always placed on the east end and the coaches immediately followed. In some instances if there was a baggage car involved, the baggage car was placed directly behind the locomotive on the east end, followed by the parlor car or cars.

Ocala Mike is referring to the commuter club cars ("Locust Valley", "South Shore":4, etc.) which looked like the old heavyweight parlors from the outside.

There are no more "parlor cars" anymore due to the new double decker equipment. I don't know all the details, but outside of reserving a regular car there is no special service anymore nowadays (unless another poster may know of something else they do now?)

The old ones were signified by red versus blue stripes on the outside. Most had a bar area and there were individual seats that you could move around where you wanted. There was a carpet on the entire length of the car's floor.

The only observation car I remember within my time frame as Yardmaster was the 2000 also called the "Morris Park". Parlor service was a pain in the butt for a Yardmaster since it required special placements and groupings and lots of extra drilling.