Discussion relating to the NH and its subsidiaries (NYW&B, Union Freight Railroad, Connecticut Company, steamship lines, etc.). up until its 1969 inclusion into the Penn Central merger. This forum is also for the discussion of efforts to preserve former New Haven equipment, artifacts and its history. You may also wish to visit www.nhrhta.org for more information.
Forum rules

by Leo Sullivan
Sun Sep 05, 2010 6:42 am
During and shortly after after WWI there was a shipyard at Squantum, in the City of Quincy, Massachusetts.
The Boston Elevated built a special trolley line to serve this shipyard and, in researching photos
(very blurry) of that trolley line, I noticed railroad passenger cars behind the trolley loop.
Public Timetables don't mention it so, I'm hoping someone here has some info.
LS
You do not have the required permissions to view the files attached to this post.

by 3rdrail
Sun Sep 05, 2010 12:20 pm
This photo has really peaked your interest, hasn't it, Leo ! I have to go on record as still believing that this isn't Neponset and that those are Main Line rapid transit cars back there. They just look too short for railroad cars. (Look for the roof drip rail, mid-point.) As far as where the photo might be, in my opinion it's Main Line or even Eliot (I noticed that there is a 5.17.19 caption under the photo which coincidentally happens to be a date when Main Line cars were being used on the Cambridge-Dorchester line.) Are you sure that the photo isn't mislabelled ?
You do not have the required permissions to view the files attached to this post.
~Paul Joyce~
Moderator: Toy Trains, Model Railroading, Outdoor and Live Steam
Paul Joyce passed away in August, 2013. We honor his memory and his devotion at railroad.net.

by Leo Sullivan
Sun Sep 05, 2010 1:21 pm
No 3rd rail, not at Neponset, at Squantum, not in Boston, in Quincy. The New Haven had to build a 1 mile spur to get to Squantum, it is many miles from the elevated or, in 1919, from Broadway Station. The picture is clearly captioned "Squantum Loop 5.17.19". There really were short railroad cars.
LS

My Lost Railroads of New England by Karr is showing no RR in Squantum. The closest is Old Colony's line through Atlantic (North Quincy) accross the Neponset Bridge. I looked at a 1929 New Haven map, and that shows the same thing as a carryover from Old Colony (Atlantic to Neponset). There's the electric line out there, but no RR that I can see. I'm intrigued with anything on East Squantum St. as it's still relatively undeveloped on both sides and I wondered if it might show any interesting evidence.
~Paul Joyce~
Moderator: Toy Trains, Model Railroading, Outdoor and Live Steam
Paul Joyce passed away in August, 2013. We honor his memory and his devotion at railroad.net.

by 3rdrail
Sun Sep 05, 2010 3:52 pm
OK, I see what you're talking about, Leo. The confusion was that the "Squantum" that you have been referring to, I never have considered Squantum (I'm not sure the residents do either). It's that northerly point where the Marina Bay condominiums sit and the militiary installation once was. I've always thought of that as Wollaston or North Quincy, but the 1923 Branch map does refer to it as "New Squantum". OK, I see the RR tracks, and on my 1916 BERy map, I see how the streetcar tracks (listed as "foreign double track"-I'm assuming EM) spider into this area from the line that heads up into what's now East Squantum Street. So, you've convinced me that it could happen. I still want to see a 46 foot long New Haven car of the period with a RR clerestory roof.

~Paul Joyce~
Moderator: Toy Trains, Model Railroading, Outdoor and Live Steam
Paul Joyce passed away in August, 2013. We honor his memory and his devotion at railroad.net.

by fm
Mon Sep 13, 2010 2:44 pm
I recently wrote a comprehensive illustrated history of NAS Squantum that covers the so-called Victory Plant shipyard. The book is called "NAS Squantum: The First Naval Air Reserve Base" and you can see it on the VP Association web site's "geedunk" page at http://www.vpassociation.org.

I'm under the impression that the Eastern Massachusetts Street Railway had a pre-existing trolley line that ran down East Squantum Street that served the WW1 era Victory Plant Shipyard, which was located on the site of the present-day Marina Bay condominium community in Quincy, MA. An industrial spur, called the Victory Branch, diverged off the New Haven Railroad's Old Colony Division main line near Atlantic and ran into the shipyard. The Bethlehem Shipbuilding Company operated an industrial railroad within the shipyard itself with their own locomotives, freight cars, etc., but NHRR freight trains may have entered the property too. I have seen at least one photograph (it might have been in the Arcadia Press "Squantum and South Weymouth Naval Air Stations" book showing a string of flatcars with truss rods and arch-bar trucks lettered "Bethlehem Shipbuilding Company Squantum Works" or something like that). I am also under the impression that the Bethlehem Shipbuilding company had a few old passenger cars that they used to operate a shuttle service between the shipyard and the NHRR Atlantic station before and after shift changes. The shipyard was located in what was a fairly isolated area and there were few private automobiles in those days. The trolleys would have been hard pressed to carry the literally thousands of people who worked in the shipyard on three shifts seven days a week during the war and most people would have taken the NHRR Old Colony Division commuter trains and taken the shuttle train into the plant. To further ease the commuter situation, the Bethlehem Shipbuilding Company had living quarters, cafeterias, and entertainment (library, movie theater, etc.) so many workers could live there on the property during the week in dormitory-type conditions and only go home on their days off.

by Leo Sullivan
Mon Sep 13, 2010 3:39 pm
Thanks fm, your post certainly helped with the question of the railroad line to the shipyard. I'm still hoping that
someone will come up with information about where trains to Squantum originated. The trolley line in the picture
is not the pre-existing Bay State (later Eastern Mass.) carline on Squantum St. but, a purpose built line that ran down
Victory Road in Dorchester, across the mouth of the Neponset River and into a loop on the north side of the
shipyard complex. It can be viewed by searching "Ward Maps" , going to Quincy Mass. 1923 and looking at
plates 6,7,8 etc. The Eastern mass. was very annoyed that the line continued to operate after the war emergency.
However, the bridge burned and peace reigned.
I'll be looking for your book.
LS

by fm
Mon Sep 13, 2010 5:44 pm
If you are looking for "NAS Squantum: The First Naval Air Reserve Base" in bookstores you will never find it. It was privately published and is only available on-line directly from the printer. As indicated previously, you can order it on-line through a link presented on the "geedunk" page on the VP Association web site at http://www.vpassociation.org.

You know, I forgot about the Victory Bridge over The Neponset River. This originated at City Point near the Old Colony Yacht Club. There may, in fact, be a very small piece of this bridge left near the so-called Victory Park near the northbound Southeast Expressway off-ramp on Victory Road. You can see it when the vegetation clears in that area in the spring and fall. Anyway, there was a Boston Elevated trolley line over the Victory Bridge, which was a trestle structure made of wood with a steel draw span over the river's navigable channel. The trolleys ran from the Dudley Street station into the shipyard via the Victory Bridge and Victory Road. The trip took 30 minutes and the fare was five cents.

Regarding the special passenger train operated by the Bethlehem Shipbuilding Company at Squantum, it had a steam engine and eight cars. It operated over the so-called Victory Branch from the center of the shipyard to the NHRR Atlantic passenger station, crossing a wooden trestle over Billings Creek. The trip between the shipyard and the Atlantic station was free to shipyard workers presenting a valid BSC badge and took five minutes. About 3,000 workers were carried each day in six scheduled round trips.

The Victory Branch itself, and the ten miles or so of industrial trackage within the Victory Plant shipyard, were built for Bethlehem Shipbuilding Company by the New Haven Railroad. The first train operated over the Victory Branch on November 13, 1917.

The Bethlehem Shipbuilding Company vacated the Victory Plant in June 1920. In later years various buildings were leased to a variety of businesses. The Victory Bridge was torn down during the summer of 1925. The largest buildings at the Victory Plant were basically destroyed by a terrific two-day fire that began on June 22, 1932. The old shipyard was gradually torn down in the years that followed with the last structures being demolished just before WW2 so that modern paved runways could be built at adjacent NAS Squantum.

If you are interested in the Victory Plant, I suggest you make arrangements to visit the archives at the Boston National Historic Park on the site of the old Boston Navy Yard in Chelsea. This is located near the U.S.S. Constitution. They have a large number of old photos of the Victory Plant that you can view. You just need to call the Park Service in Boston and make an appointment to see them a week or so in advance. As I recall (I copied a number of their photos to use in my book) they had a lot of stuff that showed the trackword inside the Victory Plant. I remember one was detailed enough that I could see that the switch lamps used in the shipyard were Peter Gray square-bodied lamps.

by The EGE
Sat May 30, 2020 2:59 am
I believe I've stumbled across the photo that Leo was referring to. It was taken on May 7, 1919 - you can see more photos of the line from that date on this thread. A string of passenger cars is behind the streetcar. (Click to go to the file page - the full-size version is quite clear.)

This 1923 map shows both the streetcar loop and the Victory Branch: 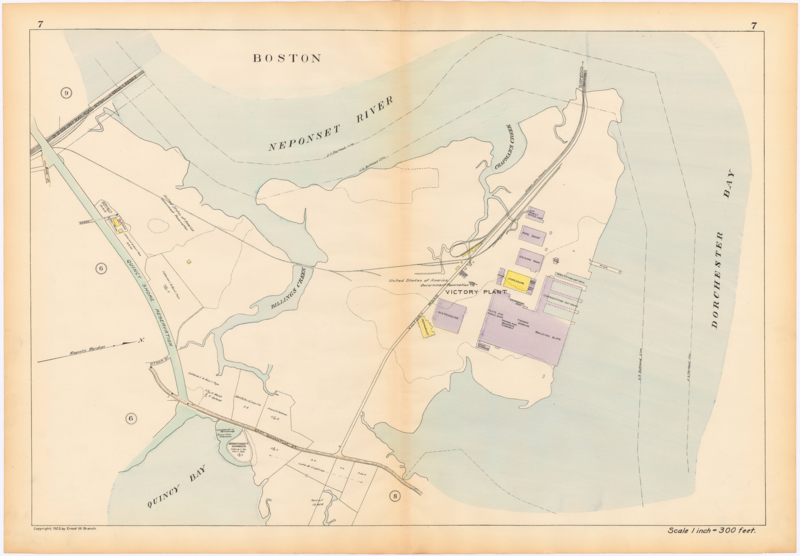 A small piece of the Victory Branch actually remains: the piers of the trestle over Billings Creek. It's located east of Commander Shea Boulevard a bit south of Seaport Drive. I took this in March 2017:

by pbj123
Sun Aug 29, 2021 4:11 pm
Just looking through old posts and saw a picture where there is some dispute of its location. The picture of the EL cars is actually the end of line storage yard at Forest Hills. The street in the background are Hyde Park Avenue and Walk Hill Street.