Today, the line is in various stages of being converted into the Bruce Freeman Rail Trail.[5]

Currently CSX still owns the ROW south of the diamond and it is doubtful that will change anytime soon. It is my understanding that CSX has priced it as if it was expecting another line to acquire it. The town does not have the funds available to purchase it, sooo.. The BFRT folks'll need a good "plan B".. Oh, and as of today, the "Tracks Out Of Service" sign still stands at the site of the now_all_traces_of_it_have_been_removed grade crossing on the Post Rd. (U.S. 20)
Seen behind the motorman on the inside wall of a PCC departing "Riverside" many years ago: "Pickpockets are on duty for your convenience."

by l008com
Mon Apr 02, 2018 12:12 am
There are a couple of warehouses in the area of the diamond but nothing else along that line at all except schools and houses. Do they really think that's enough to sustain a line that would have to be mostly rebuilt anyway?
My YouTube Channel:
John's Train Videos

l008com wrote:There are a couple of warehouses in the area of the diamond but nothing else along that line at all except schools and houses. Do they really think that's enough to sustain a line that would have to be mostly rebuilt anyway?

Methinks "mostly" is a mega-understatement..

Seen behind the motorman on the inside wall of a PCC departing "Riverside" many years ago: "Pickpockets are on duty for your convenience."

by craven
Sun Apr 08, 2018 7:12 pm
It's all about Rail Trail $$ that the politicians wrote legislation for their re-election bids.

Why give it away when they can demand BIG $$$ and the State Trail Huggers will buy it !

by BandA
Mon Apr 09, 2018 12:18 am
But how many developable parcels can be carved from a skinny ROW? Assuming all the yards have already been sold off. How wide is the ROW? Plus developers would want a discount. I suppose they could build a long skinny solar farm!

by NRGeep
Mon Apr 09, 2018 9:16 am
Will never happen now, but NH line would have been a prime candidate for Worcester - North Station connections via West Concord.

NRGeep wrote:Will never happen now, but NH line would have been a prime candidate for Worcester - North Station connections via West Concord.

When Raytheon was in Sudbury and in it's heyday, with the attendant "rush hour" traffic it generated, any serious train traffic across the Post Road (U.S. 20) probably wouldn't have gone over too big.. That and where the grade crossing was right at a "T" intersection with Nobscot Rd., It would've been an accident waiting to happen unless it was permanently slow ordered. I remember "in the day", PC crews would stop just clear of the Post Road and bop into Friendly's for a break.
Seen behind the motorman on the inside wall of a PCC departing "Riverside" many years ago: "Pickpockets are on duty for your convenience."

by l008com
Mon Aug 01, 2022 5:22 am
Reviving this thread because I'm going to hopefully be making a short video later today and I want to make sure I describe everything right.

So the east-west line is the Central Mass line that went to Waltham and technically Somerville to the East, and to the West all the way to the Clinton tunnel and beyond.

The North-South line was called the Sudbury Industrial? It went South to Framingham and North through West Concord and to Lowell?
My YouTube Channel:
John's Train Videos

That's the good news. The bad news is.... survey markers ALL OVER the place. I think the rail trail construction is coming, I think these tracks are probably getting ripped up pretty soon.
But still, No trains in 20/40 years so better a rail trail that we can all use, vs walls of weeds no one can use.
My YouTube Channel:
John's Train Videos

by MaineCoonCat
Tue Aug 02, 2022 7:22 am
According to the minutes, the Conservation Commission issued the Order Of Conditions #301-1362 at the meeting on 28 February, so it wouldn't surprise me.

There is also Eversource's project to install an underground high voltage transmission line on the Central Mass Branch ROW running from the substation in East Sudbury, about 300 metres (985 ft.) east of the site of the East Sudbury station (MP 18.84) to Hudson. I believe this has been finally approved by the necessary authorities. Originally, this was to be above ground. I do not know if this has anything to do with those survey markers.

There was an issue raised as to whether or not the MBTA had formally abandoned the parts of the Central Mass branch involved. Apparently the STB has settled that matter.

Neal McNamara,
Patch Staff
Updated Thu, Feb 10, 2022 at 8:19 am ET
Eversource is planning to bury utility lines under a former MBTA corridor that runs through Sudbury. The group Protect Subdury Inc. has tried to stop the project.

SUDBURY, MA — A key federal board has ruled against a Sudbury group seeking to stop an Eversource utility line project in town, the latest in a series of legal setbacks for Protect Sudbury Inc.

In a Feb. 1 decision, the federal Surface Transportation Board (STB) denied Protect Sudbury's request to declare that a former MBTA rail line has not been abandoned. Eversource is planning to use the east-west railroad corridor to bury transmission lines between Sudbury and a substation in Hudson.


At the time, Protect Sudbury President Ray Phillips told Patch the appeal to the federal Surface Transportation Board was the next step in the group's legal strategy. Phillips said in June he was 95 percent sure the STB would agree with Protect Sudbury.

In the Feb. 1 STB decision, the board said that Protect Subdury has no interest in rail service. Ruling in Protect Subdury's favor might be an "abuse" of the STB's power since the group only wants to stop the transmission line project, the decision said.


Read more of this story at the Patch's web site
Seen behind the motorman on the inside wall of a PCC departing "Riverside" many years ago: "Pickpockets are on duty for your convenience."

by BandA
Tue Aug 02, 2022 7:55 pm
There is a crying need for an alternative to US-20 from I-495 to Boston. If they were to restore passenger train service from Berlin to Waltham via the Mass Central Line and build a new junction with the Fitchburg Line, I bet more people would use it than will use South Coast Rail!!

Double-track Rail + Trail + underground power would be an excellent win-win-win.

Over the years, the Sudbury Valley Trustees and the Town of Sudbury have done really amazing work preserving nature and history. (Contrast with their neighbor Framingham) Protect Sudbury appears to be a special interest group focused specifically on stopping this transmission line project. They make some really good points, apparently also suing the state for withholding public documents, but also raise the usual NIMBY hackle. Telling is that they don't mind if Eversource spends an extra $20M of their ratepayers' money building the line under roads rather than railroad. Without looking deeply at this, I will assume that the DCR is happy because they get free site prep for the rail trail, (including possibly bridge repairs???), and the town gets the rail trail sooner rather than later, and gets the power line built underground not above ground.

No links to the STB documents that I can see. When you read for free, you get what you pay for.

The following is very interesting along with photo of abandoned-in-place signal equipment. And that's just the first two pages of 182. Bet there are some Indian burial grounds along the route and colonial era artifacts too. www.protectsudbury.org/wp-content/uploa ... r-2017.pdf

The archaeological reconnaissance survey was conducted for an approximately 9-mile long proposed project route, primarily along an unused railroad corridor/right-of-way, and under roadways for 1.3 miles. Six railroad station sites, a railroad section house and two colonial residential sites have been noted along the Project route. The South Sudbury Station site (SUDHA-26) and the Walker Garrison House (SUD-HA-30) have been previously identified. Other station sites include the East Sudbury Station and Wayside Inn Station sites in Sudbury, and the Ordway Station, Gleasondale Station, and Gleason Junction Station sites in Hudson. The Boston & Maine Railroad Section House site consists of a standing ca. 1890 structure and yard area. A fieldstone-lined cellarhole was also identified in Sudbury in the Memorial Forest. All of these sites are considered to be potentially significant. In addition, the Project route has been assessed for archaeologically sensitive areas with recommendations for further investigation of sensitive areas within the area of potential direct effects.

I googled for 115kV underground power line. I get descriptions of an aluminum cable with thick insulation, not some exotic installation cooled with PCB oil. Underground where it is unaffected by sleet or snow or hurricanes (unless there is flooding, oops). On Protect Sudburys' website, I see a picture of a trencher cutting a slot through roadbed and spewing dirt and dust onto the surface. Will Eversource sift this for arrowheads? Probably not. Also sucks that they will clearcut all the 50+ year old trees, but what do they expect? Will they use pesticides? Of course they will, which is terrible and should be stopped!!

by MaineCoonCat
Wed Aug 03, 2022 4:16 pm
I agree there is a crying need for an alternative to Boston Post Road (U.S. 20). I've often thought it would be a great route for electrified light rail. That said, there are wetlands, resource areas and rare/threatened species habitats that must be considered. And things such as creosote in the soil that will be disturbed. If any disturbance to these can be mitigated, then I'm okay with it.


Will they use pesticides? Of course they will, which is terrible and should be stopped!!

They'll need to come before the Conservation Commission before they try. 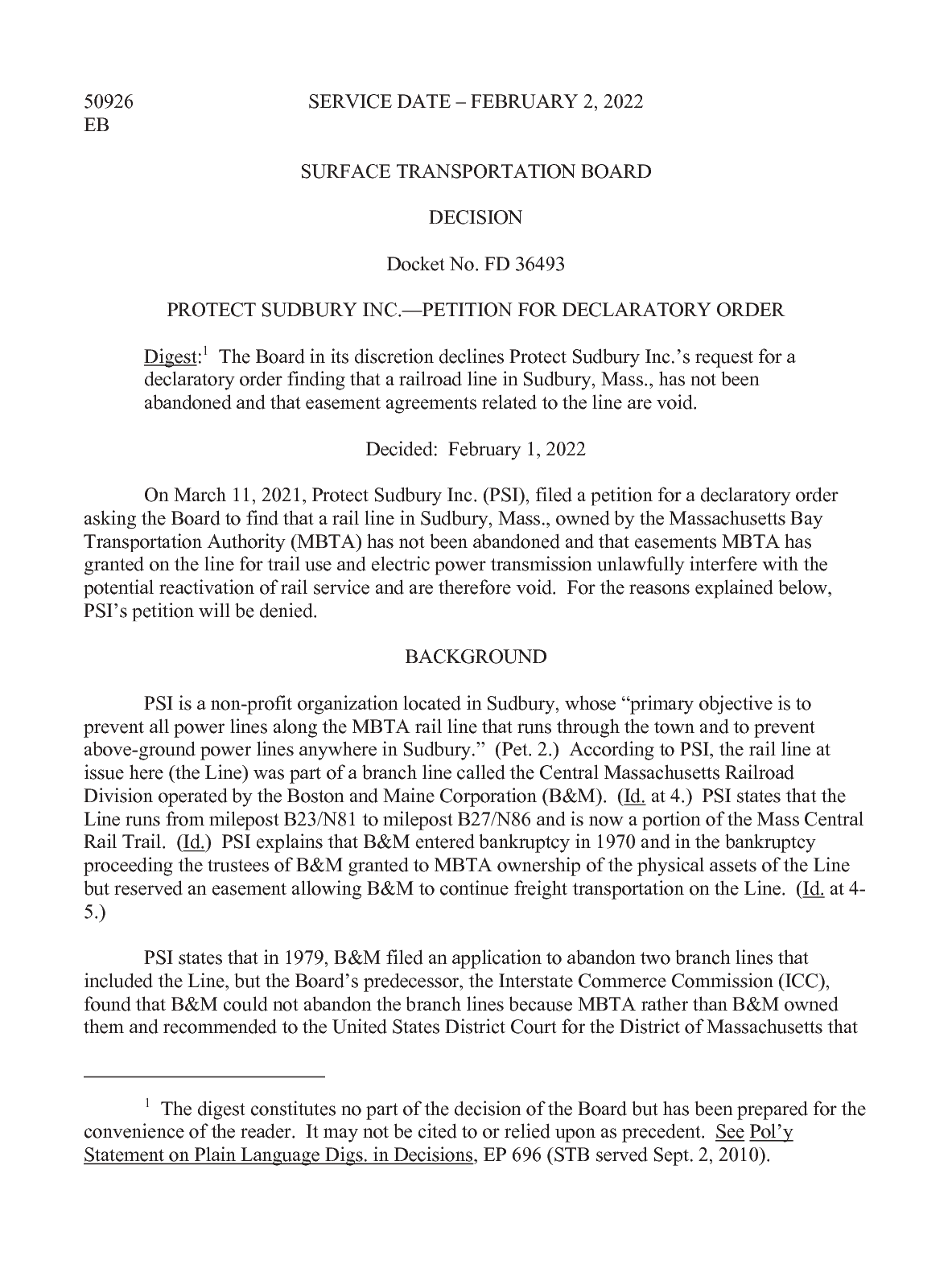 Protect Sudbury STB decision 50926.pdf
You do not have the required permissions to view the files attached to this post.
Last edited by MaineCoonCat on Wed Aug 03, 2022 4:53 pm, edited 2 times in total.
Seen behind the motorman on the inside wall of a PCC departing "Riverside" many years ago: "Pickpockets are on duty for your convenience."

I had a friend who worked for CR. He used the "Sudbury Industrial" descriptor.
Seen behind the motorman on the inside wall of a PCC departing "Riverside" many years ago: "Pickpockets are on duty for your convenience."

by ceo
Thu Aug 04, 2022 11:44 am
Just to be clear, the Eversource transmission line was planned as underground from the very beginning. The Protect Sudbury people were trying to get it routed under streets instead of under the Central Mass. corridor.