by ceo
Thu Aug 04, 2022 12:01 pm
About the survey markers: Phase 2D of the Bruce Freeman Rail Trail runs from this diamond to a little past the Concord town line, where it meets the completed part of the trail. It's at 100% design and slated to start construction this fall or next spring. I don't know if there's a plan to preserve the diamond itself.

by MaineCoonCat
Thu Aug 04, 2022 2:01 pm
Ahem.. Originally, towers were one of the options proposed. "The MBTA Overhead Route would require 90 steel monopole transmission structures ranging from 75 feet to 105 feet in height, with an average height of 87.5 feet (Exhs. EV-2, at 5-17; EFSB-V-6(1))." - Page 137. Also, an "underground, under street" option. The towers option was what really grabbed peoples' attention. IIRC, the "overhead" option was preferred by Eversource due to cost.

Sorry, the file size is too large to provide a downloadable copy here.

sudbury-hudson-20-final-decision
https://www.eversource.com/content/docs ... 4d34a762_2
Seen behind the motorman on the inside wall of a PCC departing "Riverside" many years ago: "Pickpockets are on duty for your convenience."

by l008com
Thu Aug 04, 2022 3:21 pm
What is their reasoning for wanting it under streets instead of under the RoW? Do they prefer construction traffic jams and dug up roads?
My YouTube Channel:
John's Train Videos

by BandA
Thu Aug 04, 2022 4:31 pm
I think they are afeared of the above ground option. Also, I think they are afraid of the "clear cutting" and the 150' wide "junction" vaults every ?mile? or so. Wonder if this will leave manhole covers in the rail trail!!! They feel that "streets will heal", ignoring the fact that railroad row is already disturbed. They make legitimate points about disturbing wetland areas, routing through PFAS contaminated area in Hudson. Restored or improved drainage systems might impact water tables, affecting wetlands or artificial vernal pools created through 40+ years of neglect. Can't have 115KV under the water table.

They ignore that most of the clear-cutting and drainage would occur anyway for the rail trail construction (or train restoration).

Was the Central Mass essentially abandoned in place in 1980, with only vandalism & weather degrading it?

by BandA
Thu Aug 04, 2022 4:47 pm
STB is correkt in seeing through Protect Sudbury and finding they don't have standing. But it is quite a stretch for the MBTA to assert "preemption" for a power line project, a use unrelated to railroad operation, on a line that has been out-of-service for 40+ years. Protect Sudbury asserts this project will prevent the MBTA from restoring railroad service, MBTA denies this, but their contract with Eversource prohibits them from interfering with the power line for any restoration.

So two examples of misuse or distortion of STB rules. There is a thread in main about legislation to increase STB regulation....

STB was also correct back in 1979 that the B&M couldn't abandon a line they didn't own, but only ask to discontinue service. Therefore line is not abandoned.

l008com wrote: ↑Thu Aug 04, 2022 3:21 pm What is their reasoning for wanting it under streets instead of under the RoW? Do they prefer construction traffic jams and dug up roads?

I can't speak for "them" but I do think the "under the street" routing would mean far less disturbance to environmentally sensitive areas. 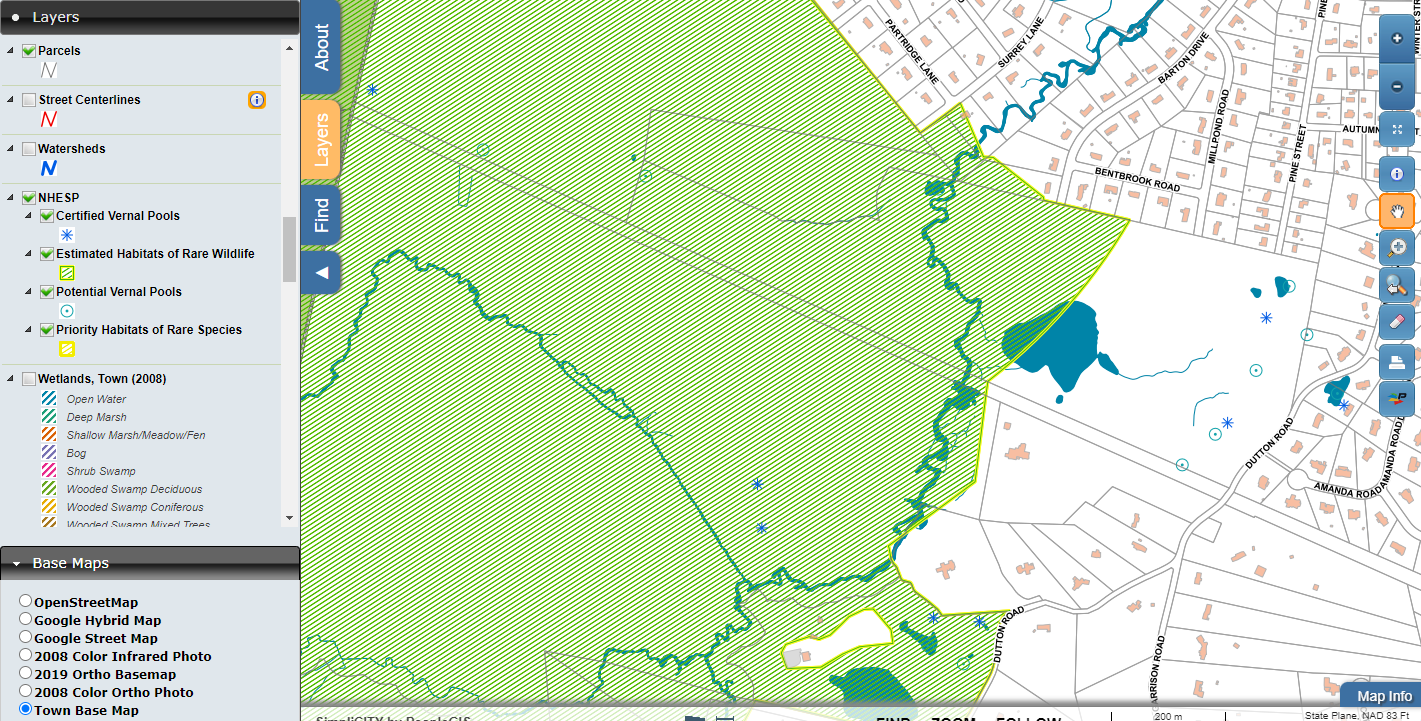 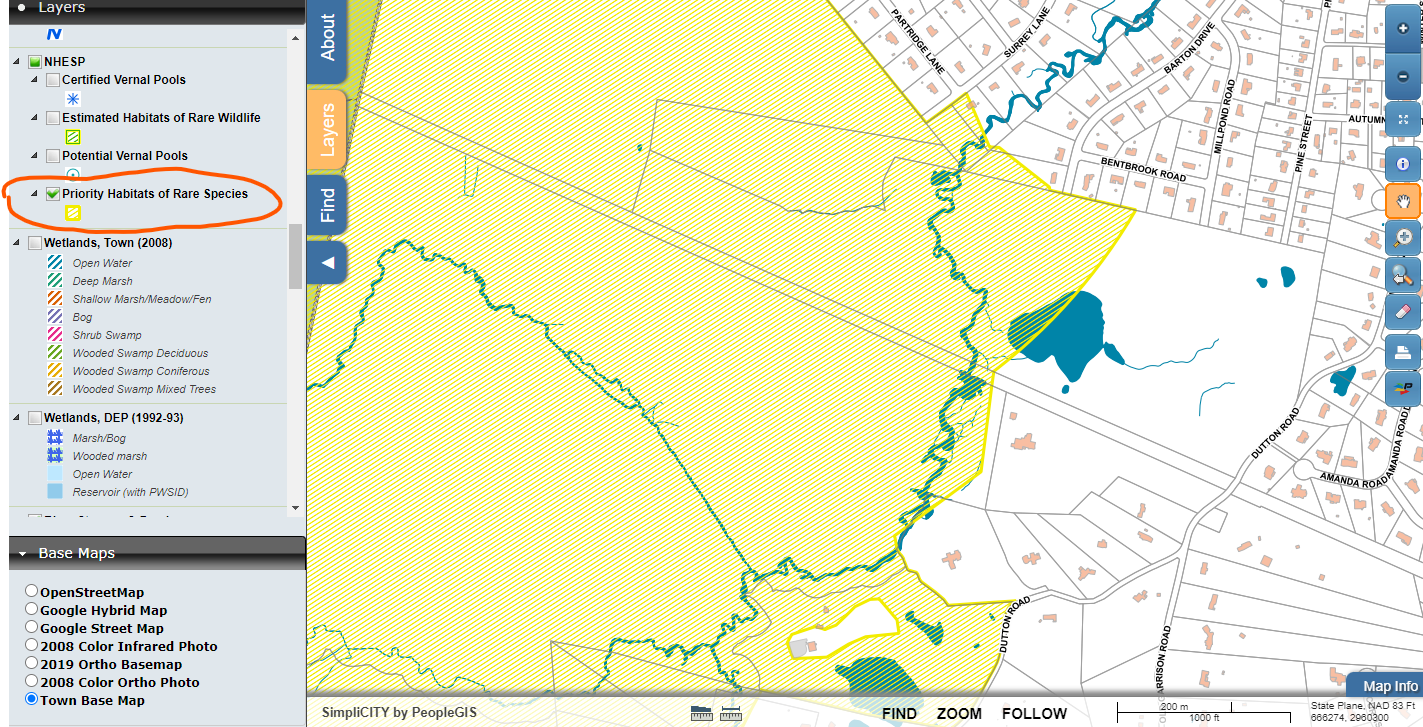 IIRC, circa 1971, an underground (under street) line was installed between the substation on Old Sudbury Road in Acton and the East Sudbury substation. I believe (I may be wrong!) it was routed under Powder Mill Road, Mossman Road, Morse Road, Concord Road, and Goodman's Hill Road. I don't recall it being a huge traffic disruption.
Seen behind the motorman on the inside wall of a PCC departing "Riverside" many years ago: "Pickpockets are on duty for your convenience."


They feel that "streets will heal", ignoring the fact that railroad row is already disturbed.

Yes, the streets will heal and yes, the ROW was already disturbed. But that is NO justification to disturb it further.

They ignore that most of the clear-cutting and drainage would occur anyway for the rail trail construction (or train restoration).

"Clear cutting" for a rail trail? Any cutting would be far less expansive. And "drainage"? I doubt there would be much of any change for a rail trail. And that assumes a rail trail actually happens on that route. As far as "train restoration", I think the odds of that are miniscule at best. We have tried fruitlessly for ages to get some semblance of commuter service restored. The G&U may have resurrected like a phoenix but I seriously doubt the Wayland and Sudbury Branch Railroad will do the same. At least, were the railroad to return, it would have mitigation value in that it would remove some vehicular traffic from Boston Post Road (U.S. 20).


Was the Central Mass essentially abandoned in place in 1980, with only vandalism & weather degrading it?

Pretty much yes. The iron is still there in many areas.
Last edited by MaineCoonCat on Sat Aug 06, 2022 2:41 pm, edited 1 time in total.
Seen behind the motorman on the inside wall of a PCC departing "Riverside" many years ago: "Pickpockets are on duty for your convenience."

by ceo
Sat Aug 06, 2022 2:20 pm
An overhead power line would have been horrible. The MCRT through Weston and Wayland is much less pretty than it could be, because of the overhead power line going down it. Fortunately Eversource dropped that idea very early on.

The files are way too big to provide a downloadable copy on this site so here is a link where you may view/download a copy of the Notice Of Intent.
https://s3-us-west-2.amazonaws.com/cdn. ... 14de163054

And the Order Of Conditions.
https://cdn.sudbury.ma.us/wp-content/up ... 877a5f2f70
Seen behind the motorman on the inside wall of a PCC departing "Riverside" many years ago: "Pickpockets are on duty for your convenience." 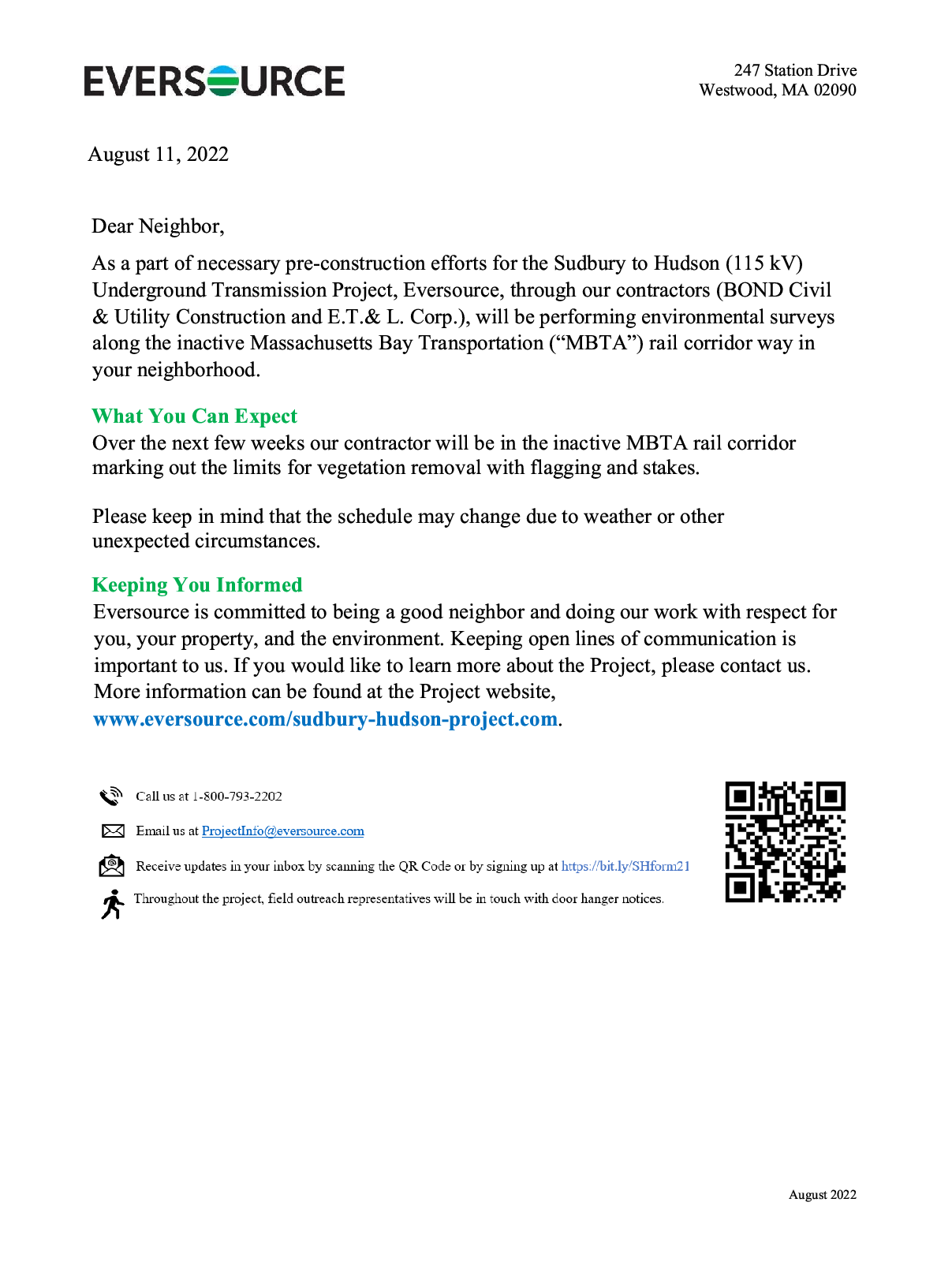 SH_MBTA-Corridor-Survey-DH-Aug.22.pdf
Project website:
https://www.eversource.com/content/ema- ... on-project
You do not have the required permissions to view the files attached to this post.
Seen behind the motorman on the inside wall of a PCC departing "Riverside" many years ago: "Pickpockets are on duty for your convenience."

by BandA
Fri Aug 12, 2022 8:49 pm
Hope they put back the rails someday for rail + trail + power. Easy to electrify if there is a 115kV line underground!! The 1960s proposals to build highways through Sudbury would have been really awful, but some of the missing spokes need to be filled in someday and Commuter Rail would be the way to do it with the least impact. Berlin is about half way between Westborough on the Framingham-Worcester Line and Littleton on the Fitchburg Line.

by ceo
Fri Aug 12, 2022 9:02 pm
Not going to happen. The Central Mass. Railroad was a marginal operation from the very beginning, it was abandoned for a reason.

At 1:28 pm. on April 8, 2011 In an article entitled "Mass Central Connector", Kit Un of the METROPOLITAN AREA PLANNING COUNCIL staff wrote:
Mass Central Connector
In 2009, MAGIC generated several transportation ideas from comments that were submitted at “MAGIC Mobility” meetings regarding suburban mobility services and constraints in each town. In 2010, MAGIC voted to spend special assessment funds on two studies: a suburban mobility study for the region’s towns and a feasibility study for a shared bicycle and bus rapid transit (BRT) path along the Mass Central Railroad right of way.

THE CENTRAL MASS ROW STUDY
The Mass Central ROW, extends west from Waltham to I-495. MAPC examined the feasibility of the path for functioning as a shared transit corridor.

MAPC took a broad look at the corridor and devoted significant effort towards gathering data on the community level for support of proposed corridor.

A central component of the study is the engagement of communities along the path to determine their level of support for the proposed project, understand community concerns, and coordinate all stakeholders to develop recommendations for the future use of the corridor.

Coordination among the communities is an important factor in the outreach, as the issues facing the proposed path include trail bridge reconstruction and numerous right of way constraints that have emerged over the years

Download the 40 page study report here: https://www.mapc.org/wp-content/uploads ... report.pdf
Seen behind the motorman on the inside wall of a PCC departing "Riverside" many years ago: "Pickpockets are on duty for your convenience."

I had a friend who worked for CR. He used the "Sudbury Industrial" descriptor.

Historically, the north-south line was originally the Framingham & Lowell RR. The F&L was purchased by the Old Colony in the 1880's, and then was incorporated into the New Haven RR and became part of the NH's Mansfield-Lowell main line. After the line between Sudbury-Lowell was abandoned in the 1980's, the remaining stub was renamed the "Sudbury Industrial".