by nyandw
Thu Jul 05, 2012 12:08 am
Seems photos of Montauk branch M-1s in action during the South Shore Grade Crossing Elimination Project are of interest to start this topic: 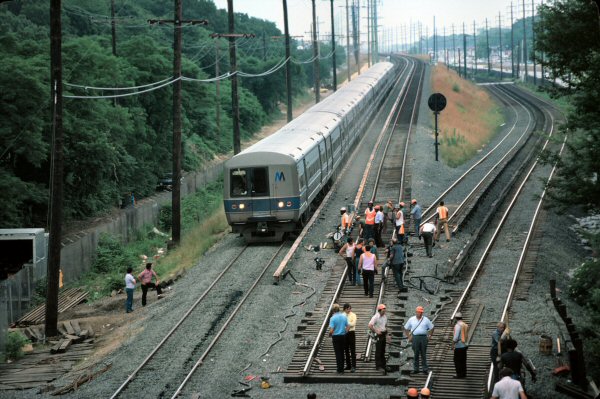 Merrick view east of Meadowbrook Parkway, June 1975. The replacement of the temporary tracks and cutting in the new elevated tracks. The temporary tracks were laid in June 1969 and removal began in June 1975. The program languished a few years due to lack of state funding, with the bulk of the elevation work occurring 1973-1975. Photo: William J. Madden Info/Archive: Capt. William Gilligan, US Navy 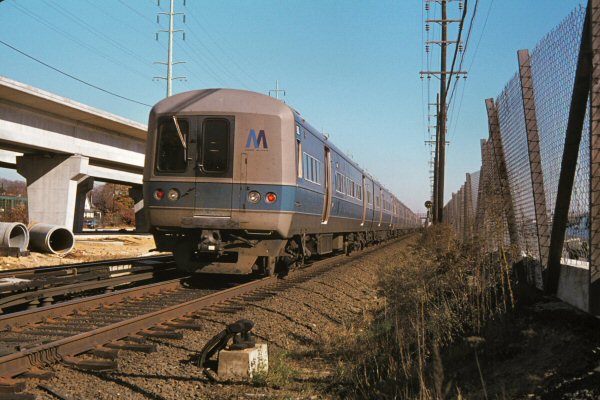 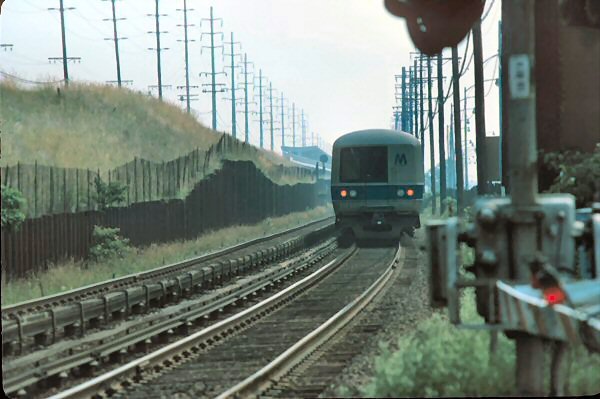 by MattAmity90
Thu Jul 05, 2012 8:32 am
I can see that I'm not the only one interested in M1 trains during grade elimination. As far as LB, Doc, and myself know, there are pictures of M1's at Merrick, Bellmore, and Massapequa Park during grade elimination of the Babylon Branch. For the other stations, I have found pictures of trains at the temporary stations in Rockville Centre, Baldwin, Freeport, Wantagh, Seaford, Lindenhurst, and Babylon during elimination. I know M1's stopped at Merrick, Bellmore, Massapequa Park, Amityville, Copiague, and Lindenhurst during their elevations because they had high platforms, unfortunately I've searched everywhere, but I know someone out there has photos of them, but I'm not the only one that can't find them, I know one day they will pop-up.

The reason it's become a huge subject, is because some of these elevated stations will be turning a milestone age. Amityville, Copiague, and Lindenhurst will be turning 40 in August 2013. Babylon will be 50 in 2014, Valley Stream will be 80 next year, Massapequa Park just turned 31 this past December. Plus the M1 was a turning point for the LIRR. Those sleek trains cut travel time from station to station dramatically, made a huge impact with speed, it's comfort, and finally the fact that it came out when we switched to MTA ownership which completely revolutionized the railroad and gave it a makeover.
This station is Babylon, this is the train to Penn Station. Stopping at: Lindenhurst, Copiague, Amityville, Massapequa Park, Massapequa, Seaford, Wantagh, Bellmore, Merrick, Freeport, Baldwin, Rockville Centre, Lynbrook, Valley Stream, Jamaica, Kew Gardens, Forest Hills, Woodside, Penn Station.

by NH2060
Thu Jul 05, 2012 10:49 am
What I don't get is why they undertook the extra work and cost to tear up the existing ROW, lay down temporary tracks, and then tear those up again a few years later. IMO it would have made more sense to just build the new elevated ROW next to the old one (the only exceptions being where highways crossed over/under it, etc.)

by SlackControl
Thu Jul 05, 2012 11:20 am
Anyone have any pictures of the grade elimination with the old diesels running through the area?

SlackControl wrote:Anyone have any pictures of the grade elimination with the old diesels running through the area?

by LongIslandTool
Thu Jul 05, 2012 1:31 pm
NH2060, there is a good reason why the Railroad didn't just permanently relocate the tracks to the temporary location.

In most cases, the railroad doesn't own the land on which the temporaries are constructed. They lease it for a few years, then give it back to its owners when finished.

LongIslandTool wrote:NH2060, there is a good reason why the Railroad didn't just permanently relocate the tracks to the temporary location.

In most cases, the railroad doesn't own the land on which the temporaries are constructed. They lease it for a few years, then give it back to its owners when finished.

On most of the Montauk Branch elevation, the land on which the temporary tracks were placed was and is owned by the City of New York.

Ah that explains it. Thanks for the clarification!

Incidentally, I remember the Floral Park grade crossing elimination. I was in high school when that started.
Today, riding the main line or the Hempstead Branch, the houses with their backyards seem so up-close to the right of way, I can't imagine where they would have put the temporary tracks, but they did, and I remember them.
Fairbanks-Morse forever!

by MACTRAXX
Thu Jul 05, 2012 6:00 pm
Everyone: I remember the LIRR grade crossing elimination projects on the Montauk Branch
growing up in the 70s-especially Lindenhurst-Copiague-Amityville and the Bellmore-Merrick
sections specifically...I remember those temporary stations and track routes used...

The Massapequa Park project was definitely different...I recall being told that residents
of Massapequa Park Village did not want a "Chinese Wall" there and that the project
had specially designed embankments on both sides of the tracks...
I always found that European design "slab track" thru there interesting...

Back in those days I sometimes carried a camera but I rarely got around to actually
stopping at those stations during the construction projects...

It is good seeing the M1s back when they had the originally designed blue stripe in
the 70s era...It helps date these pictures and the one I like here is the cut over of
tracks between Freeport and Merrick...

The 1960s elimination projects had an interesting NYS plaque attached to a column
adjacent to the ticket office...
Example: Hicksville on the N side near the main waiting room doors...
It reads: PSC (Public Service Commission) 10324; HICKSVILLE LIRR;
DPW (Department of Public Works); State of New York 1962

I also remember that when those 70s era stations were opened near the Ticket Office
there was a porcelain-enamel two-tone blue M there with LIRR or LONG ISLAND below...
These are now long gone...In closing here good 70s LIRR memories for me...

But, just for the heck of it, if anyone has photos of the M1 LIRR trains during the elevation of the Babylon Branch, grade crossings before elimination, or have photos of stations with the high platforms from back in 60's, 70's, or early 80's, you might as well upload them and share them with all of us, please, because a lot of us would love to see them because it holds history, and it would be greatly appreciated, and keep the conversation going with something we can learn everyday.
This station is Babylon, this is the train to Penn Station. Stopping at: Lindenhurst, Copiague, Amityville, Massapequa Park, Massapequa, Seaford, Wantagh, Bellmore, Merrick, Freeport, Baldwin, Rockville Centre, Lynbrook, Valley Stream, Jamaica, Kew Gardens, Forest Hills, Woodside, Penn Station.

by Head-end View
Fri Jul 06, 2012 8:22 pm
Keyboardkat, maybe you can answer a question that no one else on these boards has been able to do, since you were a Floral Park resident during the crossing elimination project. Word is that your village and the LIRR were seriously at odds during/after the project and that Floral Park is still angry at the LIRR to this day 50 years later. And supposedly this is the reason that New Hyde Park and Mineola won't let the railroad elevate thru their villages, 'cause of whatever happened with Floral Park.

So do you remember any of the local politics of that era and what the problems were that led to the village being so bitter at the LIRR? Seems to me the final product must be an improvement over those staggered grade crossings that existed at Tulip Ave. What's the story?

by MattAmity90
Fri Jul 06, 2012 10:29 pm
I've really, really got to thank everyone here for the photos, there just isn't enough to say about about it, LB your the best. It's so great that we can share all of these memories and this modern marvel project. I may have been born in 1990, but I just hope I'm not the only 21 or 22 year old that would be interested in these topics.
This station is Babylon, this is the train to Penn Station. Stopping at: Lindenhurst, Copiague, Amityville, Massapequa Park, Massapequa, Seaford, Wantagh, Bellmore, Merrick, Freeport, Baldwin, Rockville Centre, Lynbrook, Valley Stream, Jamaica, Kew Gardens, Forest Hills, Woodside, Penn Station.