by slashmaster
Mon Oct 05, 2015 9:49 pm
Is this a small perhaps 2 foot gauge locomotive in this pic? It's yellow on the right. https://www.facebook.com/mgtowtechnique ... =3&theater" onclick="window.open(this.href);return false; 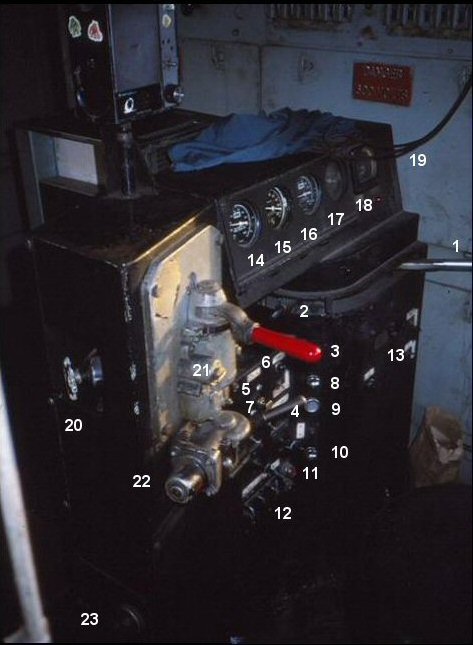 Note (1): There were two ropes with a length of rubber hose (about 18" each) on them where you would pull them down to sound the horn. One was for the "City" tone, which was lower in volume than the other, "Country" tone which was louder. Both ropes led to separate valves on the cab ceiling. If you grabbed them both together, you could make even more noise.

Further trivia: Because of clearance issues at various locations, the horns were mounted on the engineers side of the car body, on the side (not the top) of the engine, just ahead of the smoke deflectors.
Steve Lynch
Long Island Rail Road :: Trains Are Fun

by phillyrube
Thu Aug 08, 2019 3:33 pm
Took the grandson out yesterday to ride the Sunrail in Orlando, FL. Cruised from Winter Park to Kissimmee, cab end controls, then Kissimmee to Debary, engine in front. Coming back from Debary we sat up front next to the control cab. Door was open, so we could see the driver work. Engine is a MPI MP32PH-Q. On the southbound stretch it's a pusher. Pretty much figured out the controls: alarm ack on the floor, brake on the left, reverse in the center, throttle on the right. Left side has controls like the bell flashing ditch lights. Horn in the center of the desk.

Two large digital gauges, air pressure and speedo. Had a Wabtec screen that said GPS, but no map. Displayed digital speed. Part of the PTC?

When stopped, she locked the brakes, put reverse in neutral, idle low. Starting up, brakes off forward, throttle moved up between green and red. Coasting, pulls throttle back. Going to stop, applies brakes a bit, then moves throttle back up? Regenerative?

blonde would be chris, brunette would be stephanie.

you always center a reverser on a train, when stopped. it's usually mandated in the rule-book.

brakes on the cab car are "blended", so it will be both air and dynamics, as long as the throttle is idled.

if using air and throttle at the stop, she was just giving you a smooth, powered stop.