by SST
Sun Dec 12, 2021 4:16 pm
The building took a bashing yesterday and the northern wall collapsed. I’m concerned that ADM will take this opportunity to tear it down. They’ve wanted to take it down but city hall said no (or something like that). They should have made a portion of this a walk in museum to keep our history alive instead of erasing it. 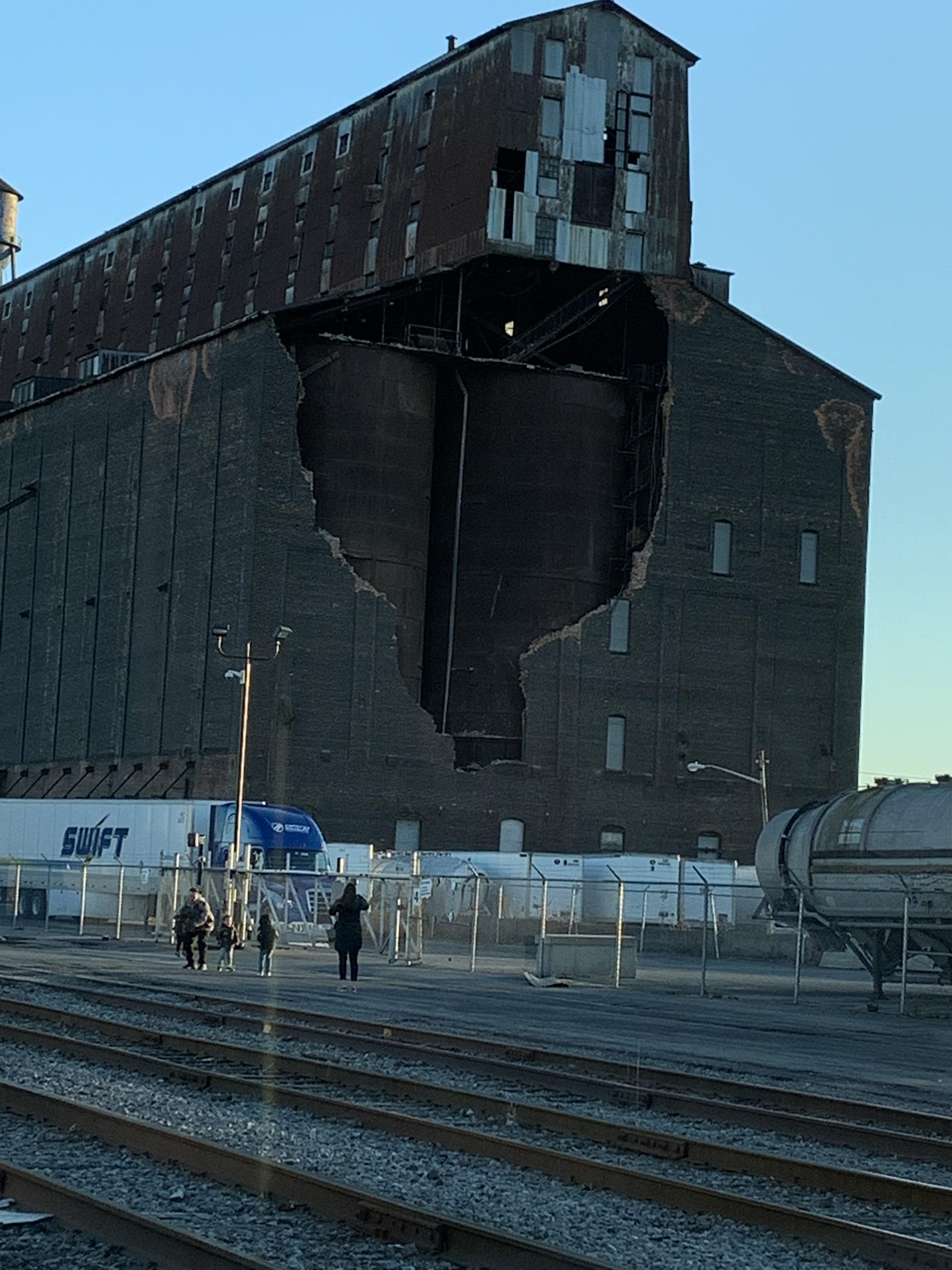 by Fireman43
Sun Dec 19, 2021 2:14 pm
Should be interesting how this progresses. I see after being dormant for almost 40 years and numerous requests by various owners to demolish denied , it appears Mother Nature has made the decision for them as a permit to demolish was just granted.
In the mean time now various groups have come forward to purchase and refurbish for different uses. Have to see who wins ( or loses).

Built in 1897 by The Great Northern RR, now this leads me to a whole 'nother online search in that direction.
Mark

Now Iatest is a developer that has been involved in major redevelopment projects wants to buy and redevelop into reuse.
Same area just a few years ago a natural gas powered semi trying to cross those sidings hit a string of boxcars in process of a push, exploded , injuring one of the train crew and the driver. HUGE explosion caught on video .

If I was ADM I would default on the property taxes and let the local gubermint repossess it or put it up for a tax delinquency sale.

Then all the folks that want to turn it into a museum can deal with all the real world expenses of maintaining a century old structure safely.

Should have been torn down decades ago.

There was one of these old grain elevators up near Kenmore Ave and Military Rd in Kenmore NY (Eastern-States). The company went out of business and abandoned it. Nobody in local gubermint had the the widsom/guts to call for it being demolished until a couple of teenagers got crawling around in the top of it (Yes teenagers can get through "safety fencing", who knew) and fell over a 100 feet to their deaths. Boy Howdy you should have seen all the folks coming out of the woodwork claiming that they "called for the elimination of this public safety hazard for many years"...

"1970s – A St. Paul’s School student named Daniel McCracken, 12 years old, fell to his accidental death in the abandoned grain elevators nicknamed Snakeland in Kenmore, NY sometime in the 1970s. This would be the first recorded death in Snakeland since it closed in 1965 (while open for business it was called the Eastern State Mill, or the Agway Building).

And other suicides happened there.

2000 – The Agway/Bryant buildings and grain elevators in Kenmore, NY, better known as Snakeland, were finally destroyed on May 21, 2000."

Take some pictures, walk through one last time with a 3D scanner and then knock it down before someone gets killed....

Or someone that wants it "preserved" forks up 100 million in cash to buy the property and another 100 million cash bond to cover any damages when it falls over or someone gets inside and falls to their death....

Nobody should expect the current owner (ADM) to maintain an unsafe and "attractive nuisance" that is not needed for their operations as a "Historic Relic" for the enjoyment of others.

Let ADM tear it down or let someone else buy it will full CASH bonds upfront to protect the public at large from taxpayer funded largess to preserve it for "history" and protection from liability..

by charlie6017
Mon Dec 27, 2021 10:17 pm
I agree 100%. It's a shame, given it's historical significance - however, it's way too far gone to be properly saved. Get your photos if you already haven't, before it comes down. Let ADM build something new and functional to keep it's roots in Buffalo, so yet another business doesn't pick up and leave.

We have plenty of elevators and other historical artifacts/relics dotting the city to enjoy.

by charlie6017
Mon Dec 27, 2021 10:23 pm
ADM and Buffalo preservationists are going to mediation. There are engineering reports in this piece that are worth looking over. Pretty sure Great Northern is toast.


BUFFALO, N.Y. (WKBW) — The fate of the "Great Northern Elevator" located at 250 Ganson St. in Buffalo's Old First Ward neighborhood is heading to mediation after the New York State Supreme Court reserved decision on whether or not to demolish the 125 year old Buffalo landmark.

Both sides of the aisle, headlined by owner and grain conglomerate Archer Daniels Midland, and the Campaign for Greater Buffalo History, Architecture, and Culture, will sit down with retired Judge Barbara Howe with the goal of reaching a compromise.

by videobruce
Thu Jan 20, 2022 9:47 am
This is still in limbo.
CSX is nothing but a continuous joke. No matter who this Capitalist Hedge Fund puts in charge, it will never be a REAL railroad!

by videobruce
Thu Jan 20, 2022 1:20 pm
ADM has no intention to sell was reported a couple of weeks ago.
CSX is nothing but a continuous joke. No matter who this Capitalist Hedge Fund puts in charge, it will never be a REAL railroad!

by Fireman43
Thu Jan 20, 2022 1:33 pm
Thinking they want to distance themselves as far away from this liability as possible?

If they would sell it, how about the safety issues between the RR & the trucks coming and going accessing the building??
CSX is nothing but a continuous joke. No matter who this Capitalist Hedge Fund puts in charge, it will never be a REAL railroad!

At first glance, the hulking brick building on the edge of Lake Erie looks like another decaying relic of Buffalo’s once-prosperous past, an image made all the worse by an enormous gash in its exterior, the victim of this city’s raking winter winds.

But to the trained and loving eye, the building — the Great Northern grain elevator — is a beauty, a testament to ingenious engineering and turn-of-the-century chutzpah, whose utility and aesthetic profoundly influenced generations of architects...

So it is with no small amount of consternation for grain-elevator aficionados that the building’s current owner — Archer Daniels Midland Milling Co., part of the farm and food products giant — has been pushing to demolish the Great Northern, setting off a furious fight between preservationists and the company. It has also placed Buffalo’s mayor, Byron Brown, in the unenviable position of either allowing the destruction of a local landmark or defying a valued local employer.

by BR&P
Mon Jan 24, 2022 10:26 am
I have mixed feelings on this one That would be a lot of money to restore that thing. On the other hand, give me a list of the zillions of tax dollars we waste on things far worse than that. I bet we could find a line item to trim which would fix that up and still have money left over.

by charlie6017
Mon Jan 24, 2022 8:21 pm
I love the building and it's historical significance. That said, it would cost an insane amount of money to save it . Here's my thought - if ADM wants to tear it down, fine. But I would want them to reinvest in the property to help secure jobs and revenue in return.

Maybe a compromise could be reached that way.
~Charlie Ricker