GOLDEN-ARM wrote:Where I'm at now, there is actually a lot of "street running", with todays trip, caught on my cell phone. At Junction City, Oregon, we run about 15 blocks, down the middle of the street. At Harrisburg, it's about 18 blocks. In Albany, it's a half a mile, then at Salem, about half a mile, again. Here's some shots, from the run, taken every 2 blocks, from start to finish. Enjoy........

The second to the last shot, shows a van, who thought he was bigger than a train. He decided against trying to push his way past us, and quickly pulled into the curb.................

I know youre an old head GA but I got to do that street running first he he he. One thing I dont miss is having to fight traffic in Salem while messin with those submarine switches. One time in Junction City we had to wait for a parade. I remember having to shove from that feed mill in Harrisburg (cant remember the name) in the middle of one of those foggy valley nights and having to have the engineer plug em because some idiot in their car would try to beat us to the next block. Then there was the time in Salem a drunk driver crashed into the side of the engine and knocked the sight glass out, there was fuel all over the street! Oh lets see one of my collegues that now works in Vancouver has the nickname ''lemon head'' because while switching in Salem a car of teenagers threw a bunch of lemons at him and the helper. One of the lemons of course hit him in the side of the head. I wasnt there firsthand but we all heard about it the next day. If you are ever in Eugene golden arm, where the end of track is at Garfield street if you look straight down 5th street you can see where the tracks ran all of the way down to the Oregon Electric station. Its a restraunt now, I liked the food and the building is in awesome shape. I reccomend it. Yeah I sure miss it up there, I hate to see another company working ''my jobs'' but its better than no railroad at all. So I say enjoy.

What a long strange trip its been.

Username
gprimr1
Rank
Site Admin
Posts
3944
Joined
Sat Apr 01, 2006 12:39 pm
Location
Towson Maryland
by scooter3798
Mon Apr 09, 2007 6:38 pm
There are a pair of places south of Pittsburgh, PA in the Mon Valley where there is some impressive street running. Elizabeth and West Brownsville, PA both host 120+ car coal trains down their streets. Elizabeth is on the former Pittsburgh and Lake Erie line to Brownsville which is now CSX, while the West Brownsville trackage is the former Monogahela Railway main. Today the West Brownsville trackage is part of NS's busy Mon Line which goes to a number of high output coal mines in the southwestern corner of PA. CSX trains also operate over this trackage since the Conrail split. The line averages over 15 trains a day last I had heard. From the 70's until the early 90's Detroit Edison coal trains would use this trackage. These trains were massive made up of special 125 ton cars and usually around 150 cars. They would always have at least three DE locos on the front, three on the back and many times three more in the middle. This was quite the sight to see rambling down the middle of the street.
Here is a shot from Elizabeth
http://www.railpictures.net/viewphoto.php?id=162245

Also there is some street running in Augusta, GA
http://www.railpictures.net/viewphoto.php?id=183021

2005Vdub wrote:golden-arm, is this the street you are referring to? Its in garfield and i believe was serviced by conrail.
http://www.railpictures.net/viewphoto.php?id=178367

Yeah, that's the one. We ran with a pair of Geep 38's, or a pair of Geep 15's. Just ring the bell, and blast the horn, for those who wouldn't stop. It's a suicide mission, out there walking along the movement. If the cars won't stop before they hit a loco, what chance does a guy have. Will relate the story, some day, about the time the conductor was hit by a car, on the NYS&W, on the way to Garden State Paper (if that's the right name) and was "given a ride" a haf mile down the highway.............

Noel, I spent many a night, around the Clearwater, St. Pete area, while on my way to various snook fishing spots. The Amtrak Depot was a neat thing to see, in Clearwater, with the trains running down the street. At Ft. Bragg, N.C., there was a depot, serviced by Amtrak, with the trains also running down the center of the street, in Fayettville. The Depot in Clearwater was a real estate office, last time I swung by there, and the service on that branch, was almost non existent. 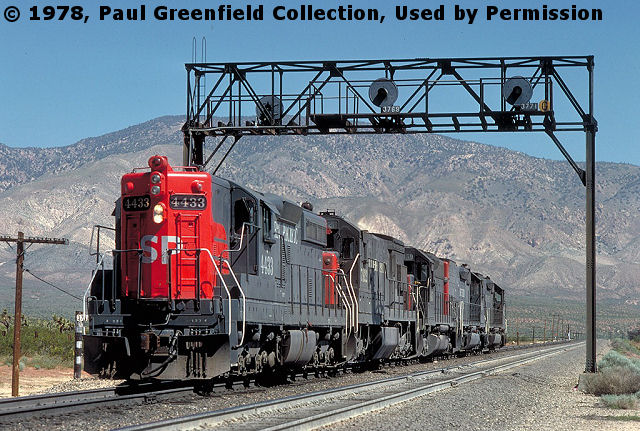 by newyorkcentral
Fri Oct 16, 2009 10:32 pm
I'm not trying to change the subject but do these trains have to follow the same rules as driving an automobile when they come upon a stop sign/stop light?

by GOLDEN-ARM
Sat Oct 17, 2009 2:39 pm
generally, these roads have no traffic lights. sometimes, the ones that do, automatically turn to green, for traffic running down the street, and stops all cross traffic. i've seen places where you activate this manually, to get traffic stopped at cross streets. locomotives aren't motor vehicles. you just blow & go. myself, i've never operated on a section of street trackage that was under control of traffic signals. but, you never know......
Moderator: EMD Forum FEC Forum KCS Forum M&E Forum NYS&W Forum

by TB Diamond
Sat Oct 17, 2009 9:04 pm
Many years ago the Newark & Marion in Newark, NY had to stop for a traffic light on NY Rt. 88. Have some photos of the job stopped at the light.
You can't go home again- Thomas Wolfe

TB Diamond wrote:The old C&S, now BNSF MT runs down the middle of Mason Street, Fort Collins, CO for several blocks. Quite a sight to see the twin stack trains rumbling right through the middle of the downtown area.

Yes, I've seen this. I wasn't sure whether it technically counted as street running though -- the track has its own lane, demarcated by yellow lines.

It's a sight to see it rumbling through traffic light controlled intersections, though (I never saw it stop for a stoplight though -- I wonder if the lights are interlocked with the train detection).

I've also seen street trackage in downtown Chicago (North of the Loop), and I saw a train parked on it. I think it was considered yard trackage; it ran at funny angles through a major road intersection, an alley, a parking lot, another road.... A local told me that it was the track where the circus train stays when it's in town. The Chicago area is actually *full* of track structures which look, and are, incredibly obsolete, and would never be built today, all kinds of at-grade intersections with very little control or safety features, which people simply don't tolerate any more.

scooter3798 wrote:and used to be some in Erie, PA until around 2002 when a by pass was built around it. This stretch also featured watch men at a couple of the crossings up until the end.Scooter

These men (3 of them at different location along the 19th st) were only there during school hours. They make sure to keep students from walking across the tracks.

I knew about this and wanted to see it in action. When I heard that NS is going to move over to CSX's, I took oppournity to take picture and video the action, a year before abandoning. It was nice to see the action. Too bad that it doesn't contiune today.

the kids were biking pretty close to the train and one kid had grabbed the handbar on the train and used train to move the kid, instead of peddling. crazy kid!

by Linz
Sat Oct 24, 2009 12:36 am
We used to have some street running here in St Catharines, ON, Canada. There was one (called the Port Dalhouise Spur) that ran mostly down tree lined residential streets, and 2 main streets to a GM plant. I used to follow the trains on my bike as a kid. The tracks were still in use the first 2 years I had a drivers licence, and it was something else to be driving down a road next to a moving train! Drivers from out of town were always surprised. A few years before this line was removed, CN stopped useing cabooses on the line. Until one day the rear truck on the last boxcar jumped the track. The crew did not notice a problem until someone flagged them down, but by this time the box had smashed something like 13 parked cars on Louisa St, some of them pretty heavily damaged. Luckly no one was injured. After that any train street running in St Catharines requires a caboose. Another spur (Townline spur) was still in use up until about April 2007 when someone set fire to a bridge on part of the line. A friend of mine lives near the street with the tracks in it, and in the winter of 2006 his wife managed to sideswipe the moving locomotive while trying to squeeze between it and a snowbank. No real damange, but she had a nice stripe of safety-yellow paint on the drivers door piller of her van.

Some pics of both of these lines, and others can be found here: http://www.niagararails.com

Username
Linz
Return to “Operations, Facilities, Maps and Resources”
- All times are UTC-05:00 -