by NS VIA FAN
Sun Nov 14, 2021 6:52 am
Most would say the last scheduled passenger trains in Maine until the launch of Amtrak's Downeaster in 2001 were Boston and Maine's RDC runs between Boston and Portland in 1965 or the Grand Trunk Portland-Montreal summer only 'passenger specials' that lasted 'till 1967......but it was actually VIA Rail Canada's Atlantic that made their last runs....40 years ago today and overnight: November 14-15, 1981.

The Atlantic Limited was originally a CPR train between Montreal and Saint John, New Brunswick running on 200 miles of Canadian Pacific across the State of Maine.......then extended to Halifax by VIA in 1979

The Atlantic did come back again in June 1985 and lasted another 9 1/2 years until it made a second and final Last Run on December 16, 1994. Maine was again Freight Only until the launch of Amtrak Downeaster 6 years later almost to the day on December 15, 2001.

Below is that 'First' Last Run of westbound VIA #11 the Atlantic at Truro, Nova Scotia on November 14, 1981. The train crossed the US/CAN Border twice (think of those logistics today) First at Vanceboro, ME at 8:40pm then reentered Canada between Jackman ME and Megantic QC around 1:45am with an arrival in Montreal at 7am on the 15th. 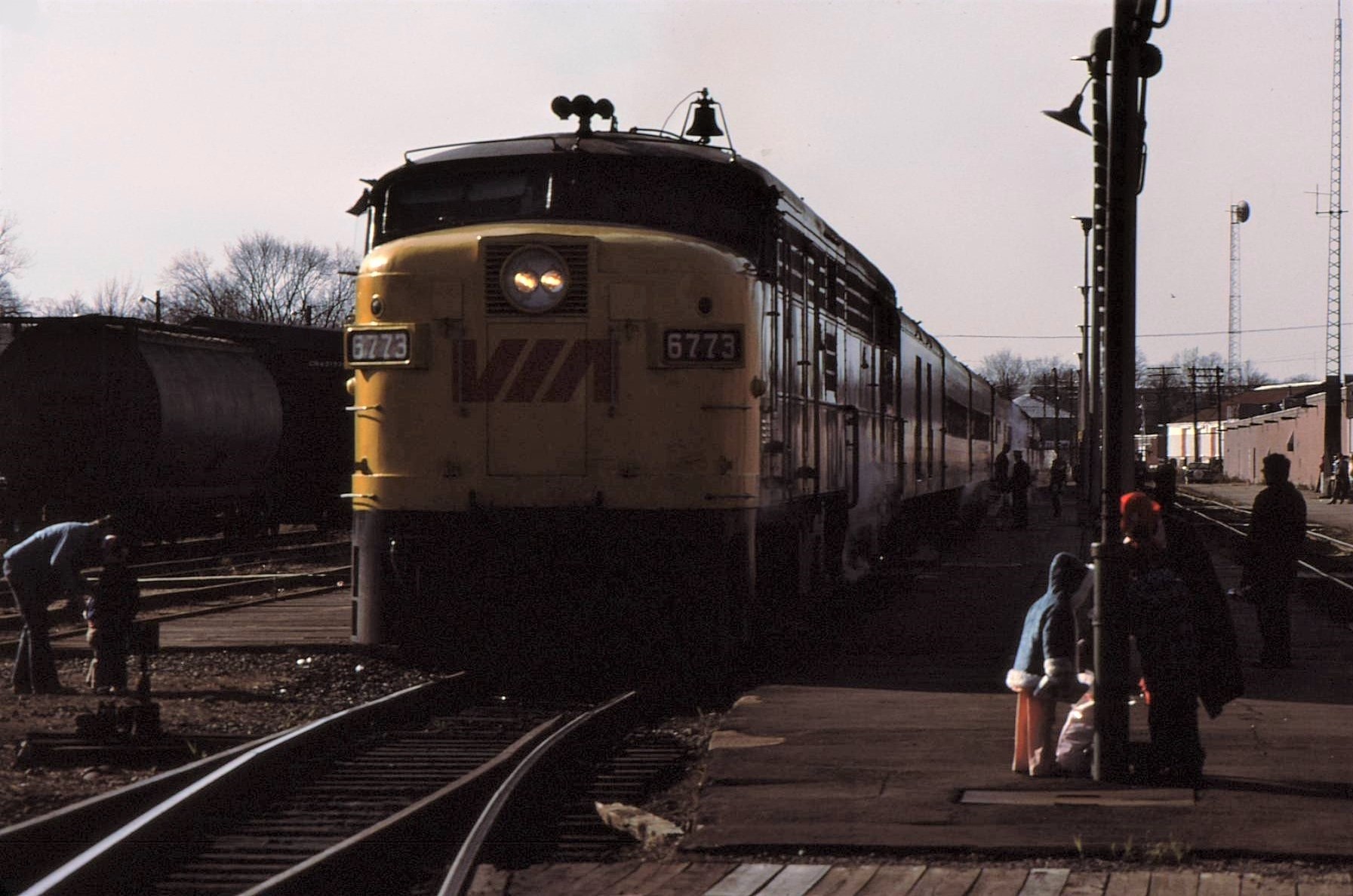 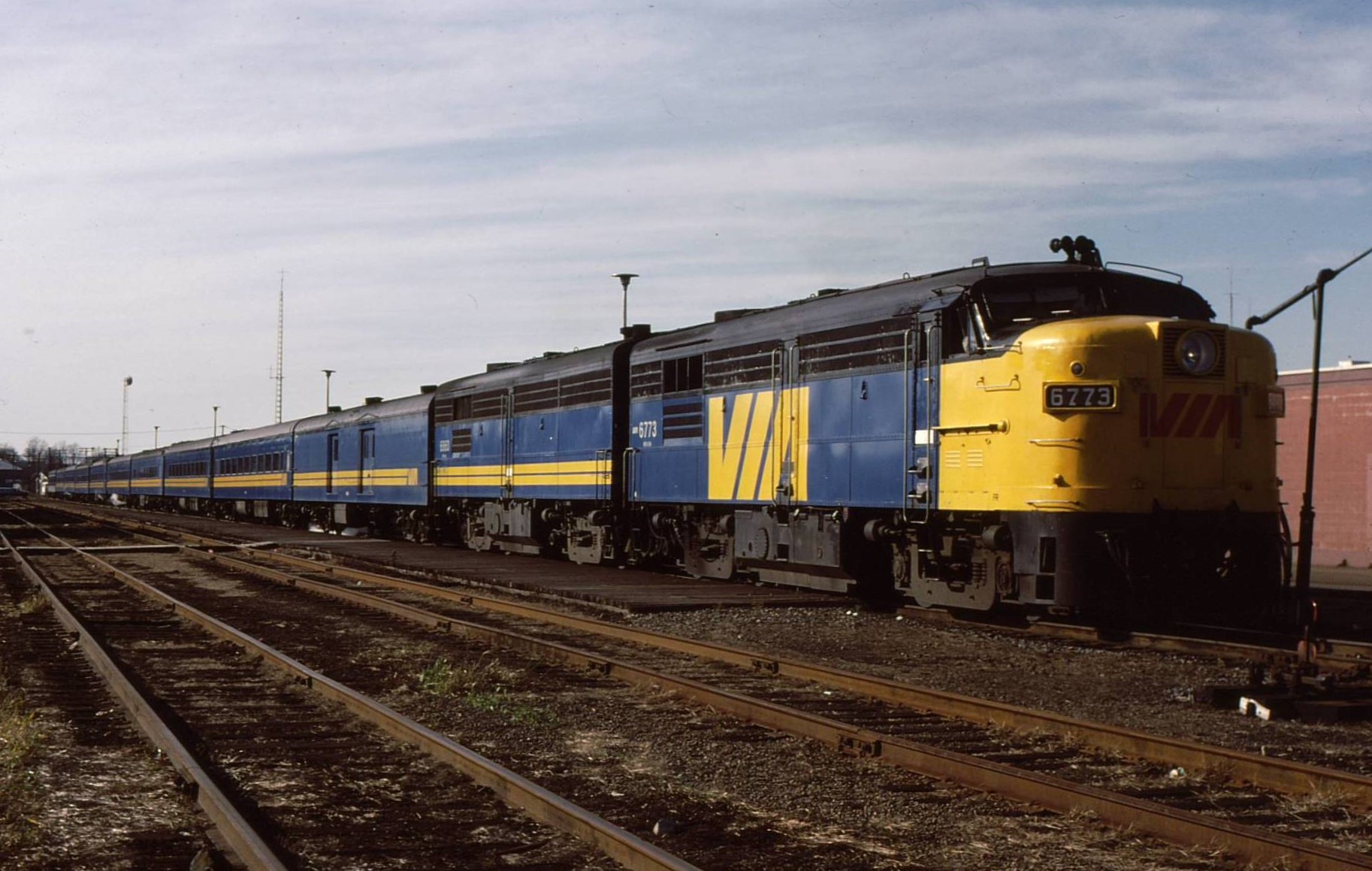 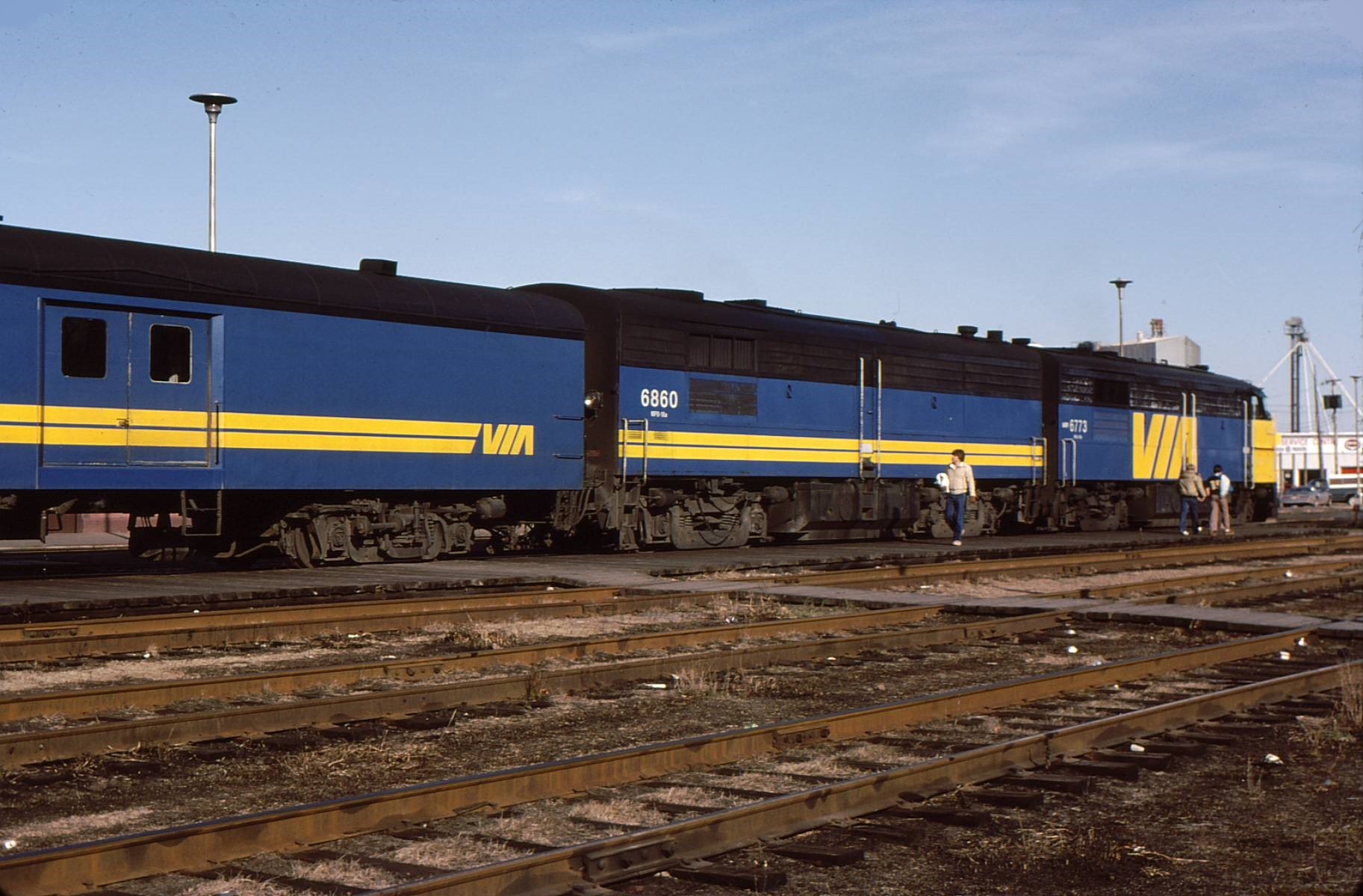 And to put another New England twist on it: although not in the consist for the last run......ex Boston and Maine and Bangor and Aroostook 6-6-4 Pullman Standard (Worcester) sleepers were regulars on the Atlantic

Here they are just a couple of weeks earlier at Saint John in October 1981. Back in the '50s.....they would have been in Saint John as the through sleeper from Boston on the jointly operated B&M-MEC-CP Gull

And at Moncton on November 2, 1981. Six hours earlier their west-east route across Maine on the Atlantic would have crossed the Bangor and Aroostook Railroad they once took as the through sleepers between Boston and Van Buren ME on the Potatoland Special 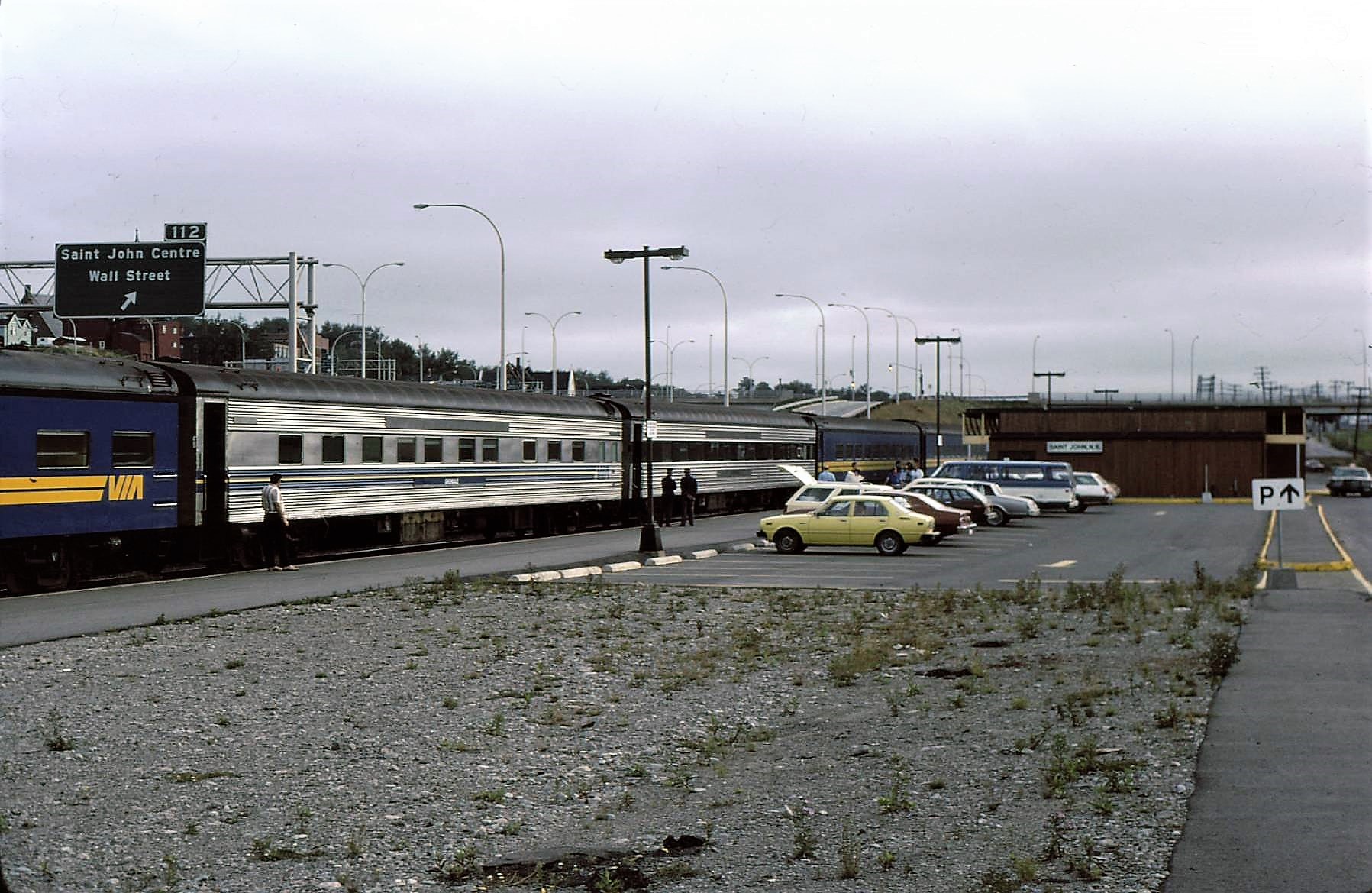 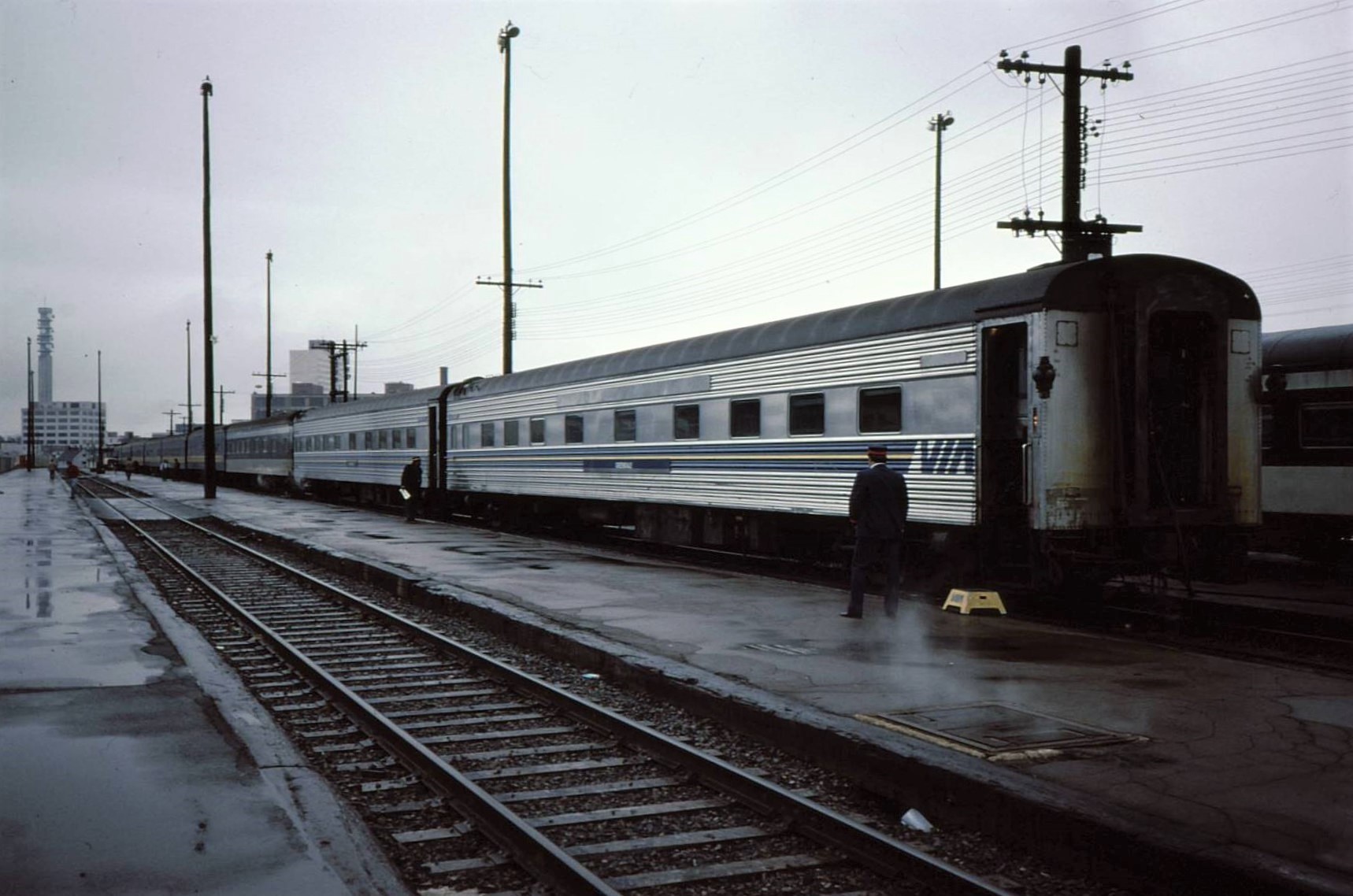 by umtrr-author
Sun Nov 14, 2021 12:58 pm
Nice! You did have me thinking that the Downeaster had been annulled though!
George in Rochester NY
The Unofficial Micro-Trains Release Report (among other things)

The 'Atlantic' stopped at six stations along the 200 miles across Maine. Below is the timetable for 1981. A passenger could ride between two Maine stations or board in Maine and ride into Canada. Brownville Jct just north of Bangor was always busy with people boarding for trips into Montreal......and a couple of times we took the Atlantic from Halifax to Greenville for skiing at Squaw Mountain. 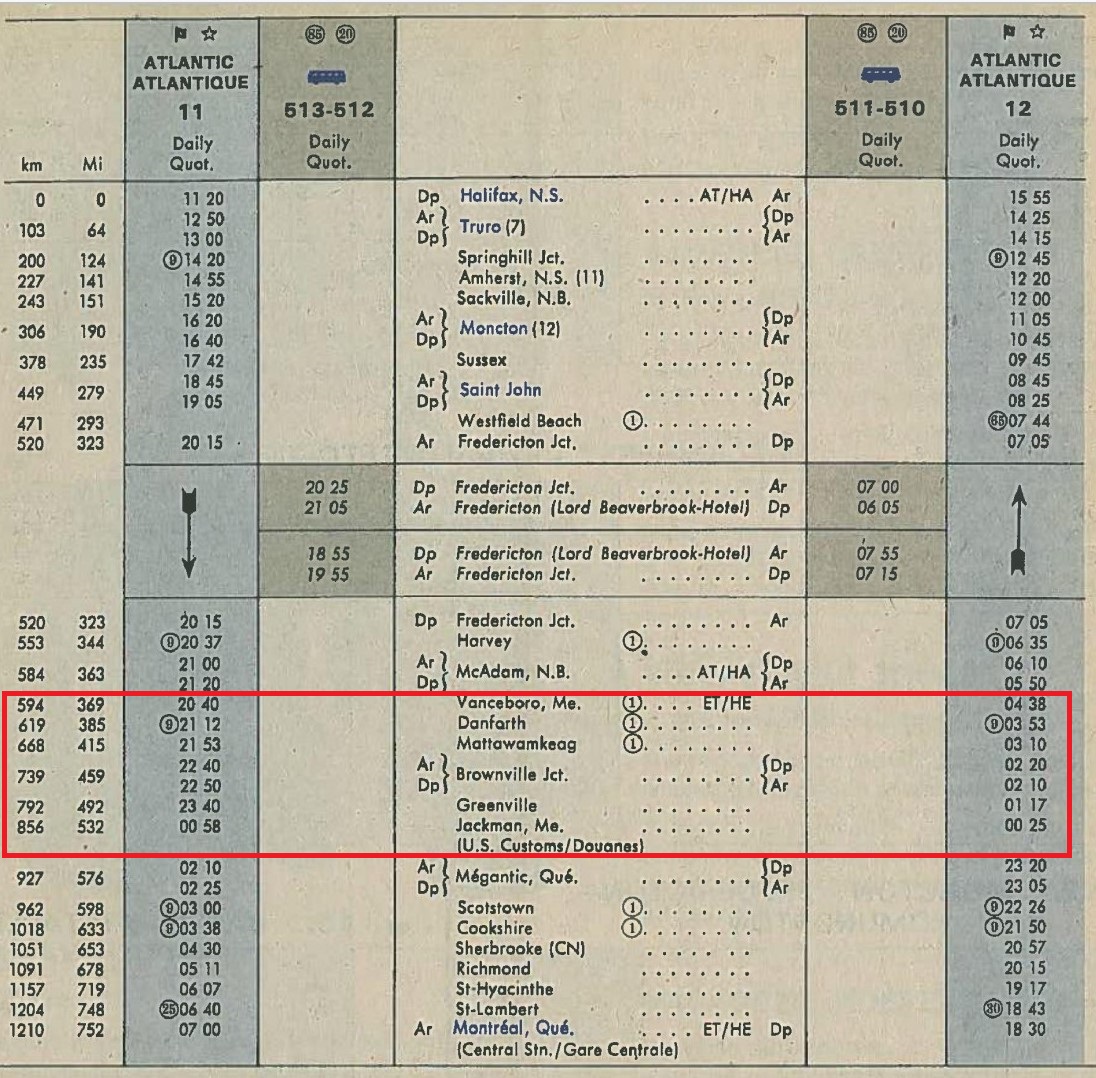 Pensyfan19 wrote: ↑Mon Nov 15, 2021 10:46 pm Why can't this route be restored by Via Rail to run and stop through Maine? Border concerns on both sides of the state?

If there was ever a time to reinstate the Atlantic...it's now. Canadian Pacific has re-acquired the line west of Brownville Jct and has extensively upgraded the route. Irving NB Southern/Eastern Maine owns east of there to Saint John and its well maintained........ but like any other passenger service........where is the money going to come from? VIA's 'Ocean' between Montreal and Halifax is tri-weekly (bi-weekly right now with the pandemic) so I don't imagine there is any desire to add another train to Halifax until the Ocean is at least daily.

And there's the logistics of two border crossings each way. Look at the long delays with the Adirondack and Maple Leaf and they only have one crossing.

There were different procedures in handling the "Atlantic" at the border over the years. When it was a Canadian Pacific operated train there was usually just a cursory inspection of coach passengers by US Customs. Sleeping car passengers travelling through were just left alone. The trains made several stops in Maine at Vanceboro, Danforth, Mattawamkeag, Brownville Jct., Greenville and Jackman. Local passengers were even carried between two US stops but anyone boarding in the US and going to Canada was checked by Canada Customs when the trains reached McAdam New Brunswick or Megantic, Quebec. This was the same procedure when VIA took over and extended the Atlantic through to Halifax in Oct. 1979 and was still in effect when the Atlantic was first discontinued in Nov. 1981.

When the Atlantic was reinstated in June 1985 there was a whole new set of rules: Now US Customs/INS insisted everyone would be inspected. Even the Sleeping Car passengers were woke eastbound at 3am ET in Jackman, Maine. Westbound wasn’t as bad: 9pm ET (10pm AT) at Vanceboro. The trains were running long and full so there were major delays.

The restored Atlantic was only back a short time before people were calling for it to rerouted via Edmundston, New Brunswick to avoid crossing the US border. Passengers were switching to the Ocean in droves to escape the hassle from US officials even if they had to change trains and wait a couple of hours in Moncton

It took a couple of years of negotiations but eventually the train was "Sealed" across the US with a metal "Tag" being placed on all doors except in the one car where the US Customs Inspector rode and only checked those getting off in the US. The “Atlantic” was discontinued in December 1994.