by R36 Combine Coach
Tue Aug 16, 2016 2:25 am
On aerials there is a former spur into the Coke bottling plant in Maspeth off the Montauk Branch. There is also a paved crossing with markings on 58 Street. The 1966 freight diagrams have the siding as "Canada Dry". What deliveries were made here?

This is the largest Coke facility in the NY area and is the only producer of Dansani bottled water in the region (basically bottled NYC Municipal water).
Since my friend continues to chain smoke nonstop, she is probably an Alco.

by freightguy
Tue Aug 16, 2016 6:48 am
I think the siding was know as Metropolitan Industries. Before Manhattan Beer took over Coors shipments, I believe that was the last active customer on that siding.

NY& Atlantic marketing tried to get Coca-Cola for shipments of corn syrup in 2000's, but no avail. I want to say that switch is ripped out now....
Signed off

by 4behind2
Tue Aug 16, 2016 7:58 am
Switch is long gone. Manhattan Beverage took four to five cars of Coors beer a week in insulated boxcars. They were the last consignees on the siding.

Farther into the siding was Manufacture's Corrugated "north side" that received paper for boxes (?) The south side siding in the old team yard took the bulk of their cars.

by wintower
Tue Aug 16, 2016 6:06 pm
That facility changed hands, from Canada Dry to Coke, close to 30 years ago if my memory serves me correctly. 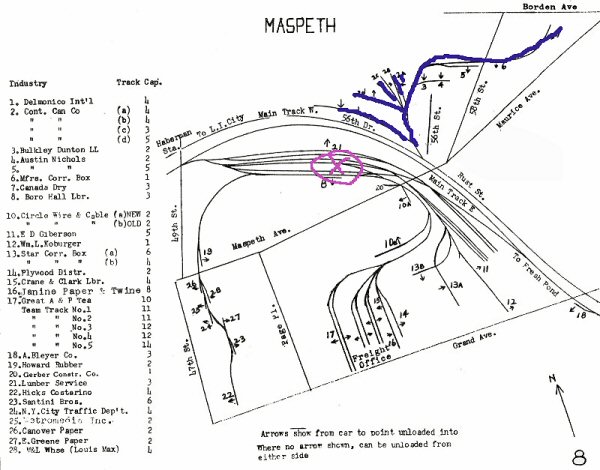 by DogBert
Wed Aug 17, 2016 11:34 pm
There's still some remnants of the switch on the montauk tracks just inside the fence off rust street - crossties and a little bit of rail.

by rr503
Thu Aug 18, 2016 12:27 am
Streetview also shows crossing markings on 58th street, and aerial view shows the telltale trace of rails on their property.
Side note, but did Canada Dry ever get service at their current facility on Rust Street?
My RP

rr503 wrote:"...Canada Dry ever get service at their current facility on Rust Street...?

Based on the maps, I would indicate no.
Steve Lynch
Long Island Rail Road :: Trains Are Fun

NYA president Fred Krebs claims to have "no choice", without a company shipping on the line, rebuilding
it was out of the question.


Until this week, Maspeth community activists held out hope that the Coca-Cola plant at 59-02
Borden Avenue—which bottles some 35 million cases of products a year—would resume shipments
by rail, rather than truck.

“I can’t invest all that money for a crossing I’ve never used,” Krebs said. “We’ll pull it out and pave it
over and that will be the end of it.”

Since 1997, when NYAR took over the Long Island Rail Road’s freight division, the company has
been trying to convince Coca-Cola to resume shipments by rail, according to Krebs.

Bob Lanz, vice president of communications for Coca-Cola, said its been more than 20 years since
the company used the rail line. To revive it was not feasible because of the amount of work that
would be necessary to make the crossing operational. “There were a number of logistical
issues,” he said.

Two weeks ago, Coca-Cola definitively said no to shipping by rail, a decision that disappointed not
only Krebs, but some Maspeth residents, because of the environmental benefits of shipping by rail.
According to Kampermann and Krebs, between 6 and 9 trucks a day, or 2,500 trucks a year bring
syrup to the plant for bottling.

Once the rails are removed and the ground is paved over, it would be expensive for Coca-Cola to
reverse its decision, since rebuilding the crossing could cost as much as $750,000. Tony Nunziato,
vice president of the Maspeth Chamber of Commerce: “If Coke really wants to be the real thing,
this isn’t the way to go.”

Update: the site has been sold to Home Depot for a future store, which would not begin work until after the Coca-
Cola lease ended in March 2020.
Since my friend continues to chain smoke nonstop, she is probably an Alco.

by freightguy
Tue Feb 23, 2021 2:34 pm
I could be wrong, but I think Home Depot is built. I'm sure local residents are thrilled about more consumer and truck traffic in the area. I would be willing to bet the bottling moved out to PA or near Albany? Like Manhattan Beer in Wyandanch they would want an active crossing with gates and flashers. Obviously both never materialized.
Signed off

Going through some maps I have, the switch to Metropolitan Industries was removed sometime between April 2011 and May 2013.