by ACLfan
Mon Sep 27, 2004 10:00 am
Recently, I stopped by the HOG's yard at Americus, GA. Two of the HOG's bay-windowed cabooses had been recently repainted, one with lettering CITY OF PLAINS, and the other being lettered CITY OF EASTMAN DODGE COUNTY.

I didn't think that the HOG (or the Georgia Midland) served the City of Eastman. So, why letter a caboose for some place that the railroad doesn't serve?

Are there plans to acquire some trackage from NS to serve Eastman, GA?

Thanks for the help!

Username
ACLfan
by ashley2771
Wed Sep 29, 2004 12:09 am
HOG doesn't serve Eastman... maybe someone from there donated the caboose or gave money to restore it... Does anyone know how Georgia Midland is doing? I know they did track work from Midville to Swainsboro this summer..

Username
ashley2771
Posts
142
Joined
Thu Mar 11, 2004 9:29 pm
Location
Georgia
by ACLfan
Thu Oct 07, 2004 5:16 pm
Thanks for the info. about the "Eastman Connection"! Sound like a really smart PR move to name a caboose after the Speaker's home town! Especially when it is in the neighborhood!

The HOG looks like it is running a great operation! it's great to see them suceeding so well!

Also, of local interest, the Georgia Southern & Florida RR Historical Society is hosting a workshop in the old GS&F depot in Arabi, GA this Saturday (Oct 9 th), with the primary topic being the old Hawkinsville & Florida Southern RR (and related lines). A field trip along the line with visits to two former H&FS depots is planned. All interested persons are invited!

Username
ACLfan
by ashley2771
Sun May 08, 2005 4:46 pm
Anyone heard how the HOG is doing lately? I used to live in GA but have moved to NC and dont' see it as often. I know it picked up some former Ogeechee Railway trackage last year. Also, any word on operations between McRae and Vidalia? There was some chance it would be restarted I thought...

Their main service area is between Rochelle (east) and Preston (west).
They typically run once a week over to Helena and interchange a few cars with NS there.
The line east to Vidalia is "Out of Service" since they don't have any customers over there. They keep in Out of Service so they don't have to waste time inspecting it each week.
HOG will use it for special excursion trains to Vidalia for the Onion Festival, and they will use it for special runs to Savannah via Georgia
Central. But other than that, there is no activity over there.

Username
dconlive_
by ashley2771
Fri May 13, 2005 11:14 pm
I'm glad the McRae-Vidalia line is at least getting the exursion traffic, but it's sad to see that renovated track sitting unused so much of the time. Montgomery Sand near Mt. Vernon and Browning Mulch near Ailey could probably both ship by rail, but don't as yet. Montgomery Sand is listed as a HOG customer, but they don't have any "white" sand right now, so there's nothing to ship...

by ashley2771
Fri Sep 15, 2006 8:49 pm
Lee Kinnamon of SAM Shortline has said that HOG is now running to Montgomery Sand in Mt. Vernon at least once a week for sand... anyone of heard or seen this operation?

by G&Fman
Sun Apr 19, 2009 1:38 pm
Don't know about the 1309, but the 1209 was gone by early 2007. It was sent to Progress Rail in Patterson, GA. She came to our engine terminal in Savannah in March 2007 after getting picked up at Dover (where she was being used on the GMR Statesboro line) and sat there for over a week before being given to CSX for her trip to Patterson.

One of the GP40's is ex-CN while the other is a former CSX unit still (last I heard) in the MofW "pumpkin" scheme.

Remember the old OGEE 1551? She was sent to Patterson in February of 2007 (like the 1209, via Savannah, CSX) and came back, this time to the HOG at Cordele with brand new paint. Last I heard she had been assigned to switch one of the plants just outside of town.
Long hood forward forever!


A meeting of local business and government leaders and a representative from the office of Lt. Governor Casey Cagle on Thursday rolled out the plan for the Cordele Intermodal Center.

The project will effectively link the Port of Savannah with the four-state area by rail, using the Heart of Georgia (HOG) and Georgia Central railroads.

The Crisp-Sumter County Industrial Development Council has an option on 1,150 acres of land in eastern Crisp County, very near I-75, convenient to the Cordele Industrial Park and the railroads.

The way it will work is industry will ship their products, by truck or rail, to the Intermodal Center where they will be loaded into containers which will then be shipped by rail (HOG, Georgia Midland Railroad, Georgia Central Railroad and CSX) to the Port of Savannah at Garden City.

Once loaded onto ships at the port, empty containers would be shipped back to the Cordele facility by rail to await more product.

The 50-100 new jobs expected to be generated will be at the Intermodal Center as well as in ancillary areas such as warehousing, distribution and trucking.

by 46u
Sat Jun 13, 2009 9:32 pm
First post so here so I thought I would post a couple pictures. Looking like for this site I am going to have to make my pictures smaller. These are full size but do not show up all of the picture. 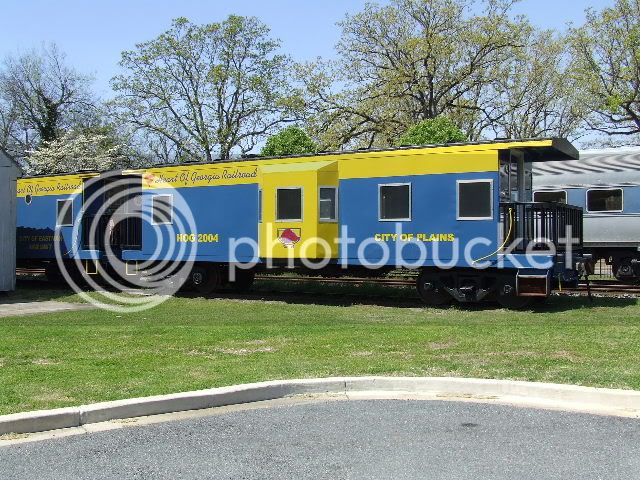