http://service.mta.info/servicestatus/s ... ssage.aspx
(Sorry for the blank page. The website did say the branch was closed today for rail testing with the sperry car.)
"Look down, step over, and watch the gap!" - Dr. John Clarke, The Gap Rap (2010)

Sperry Car on the Montauk branch today!!! Railfans, get your cameras ready!!!

(Sorry again if this link is blank. The website says the Montauk Branch will be closed for rail testing with the spery car.)


To ensure the continuing safety and reliability of the rails, the LIRR will perform ultrasonic tests on the Montauk Branch during midday, off-peak hours, February 3-7 and again February 10-14. As a result, buses will replace trains between Babylon and Patchogue/Speonk from 8:45 AM to 3:15 PM. Rail testing will be performed using the Sperry Rail Car, a bright yellow, self-propelled train car equipped with ultrasonic and induction test equipment. It is designed to detect internal rail defects that are not visible to the naked eye. Defects that are found will be corrected by a crew of LIRR track maintenance workers. Please note: South Fork Commuter Connection trains will run normally on Wednesday & Thursday, as they are not affected by the Sperry Rail Testing program.

by Pensyfan19
Mon Feb 10, 2020 5:43 pm
So we are in week 2 of sperry car testing along the montauk branch. Anyone have any pictures or videos of the sperry car recently?

Pensyfan19 wrote: ↑Mon Feb 10, 2020 5:43 pm So we are in week 2 of sperry car testing along the montauk branch. Anyone have any pictures or videos of the sperry car recently? 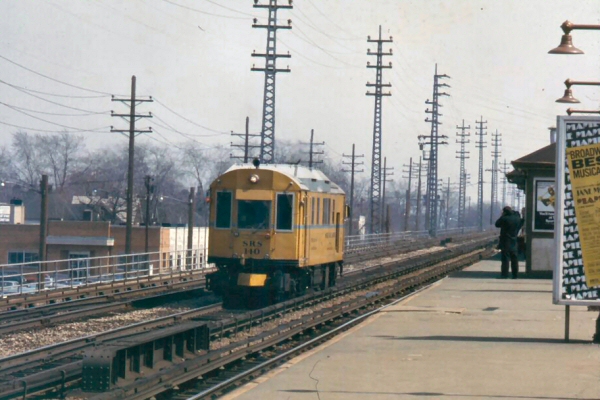 by Pensyfan19
Mon Feb 10, 2020 10:59 pm
That is a great picture! anything of the current Sperry Car's rarely announced run along the good ol' Montauk Branch between Babylon and Patchogue from either last week or if anyone happens to see it sometime this week? It will be running midday during off-peak hours, providing a forecast for great railfanning conditions!
"Look down, step over, and watch the gap!" - Dr. John Clarke, The Gap Rap (2010)

by Backshophoss
Tue Feb 11, 2020 5:24 pm
Any defects are repaired/replaced after the Sperry car finds them,a MOW crew follows the Sperry car when testing
The Land of Enchantment is not Flyover country!

SRS 140 has a very unique history: it is actually a leftover IRT R33 shell built by St. Louis Car sometime in 1963, but assembled and completed by Sperry in Danbury 1965. The R33 order was for 540 IRT cars, but in late summer of 1963 (likely under influence from Moses, Fair Chairman), there was a push to get some of the new "Blue Arrow" cars to the Flushing Line sooner so all cars would delivered in time for the fair opening in nine months. So the last 40 R33s ended up as single units for the Flushing Line, with large picture windows and two-tone turquoise livery along with 390 R36s (all pairs). However this resulted in some leftover R33 shells for the IRT Main Line ("conventional" equipment in bright red with yellow grab irons, standard drop sash windows). 34 of the leftover R33 shells were assembled and delivered at the tail end of the R36 order between late July 1964 and early 1965 and known as "Main Line R36s", completing the 424 car R36 order. These would be the very last passenger equipment in North America with the conventional drop sash windows (excluding historic replicas). Other leftover R33 shells at St. Louis remained and Sperry purchased at least one, which became 140. 140 is now in private ownership in Australia.

So in a sense Sperry 140 owes its existence to Moses, with the rush for new cars on the Flushing Line in time for the fair resulting in leftover R33 shells at St. Louis Car Company.
Since my friend continues to chain smoke nonstop, she is probably an Alco.

by Pensyfan19
Wed Feb 12, 2020 8:43 am
This is very interesting information about SRS 140! However does anyone have any footage of the current sperry car which is currently testing?
"Look down, step over, and watch the gap!" - Dr. John Clarke, The Gap Rap (2010)

by Pensyfan19
Sun Feb 16, 2020 4:06 pm
So... Two weeks of rail adhesion testing between babylon and montauk with the sperry car. Anyone have any footage of it testing within the past two weeks? I believe the sperry car which usually runs on the LIRR is SRS 128.
"Look down, step over, and watch the gap!" - Dr. John Clarke, The Gap Rap (2010)

by newkirk
Fri Jul 24, 2020 6:44 am
SRS 140
You do not have the required permissions to view the files attached to this post.
Bill Mangahas (AKA Newkirk Images LLC)
What did the French conductor say after his train derailed ?
Too Loose La Track.

by Pensyfan19
Fri Jul 24, 2020 10:10 am
Oh boy! Another ex-NYC Subway R33 Sperry Car! After doing some research on this car, I might be doing an episode of my locomotive documentary series, Remarkable Engines, sometime in the future. Thanks for the photo, but I still need confirmation that the rail testing on the port Jefferson line from 8:30AM July 22 to 3:30 AM July 23 involved the Sperry Car. Or does this rail testing usually involve something other than the sperry car? (which should be SRS 128 nowadays, stationed in Valley Stream)
"Look down, step over, and watch the gap!" - Dr. John Clarke, The Gap Rap (2010)

Pensyfan19 wrote: ↑Fri Jul 24, 2020 10:10 amOh boy! Another ex-NYC Subway R33 Sperry Car! After doing some research on this car, I might be doing an episode of my locomotive documentary series, Remarkable Engines, sometime in the
future.

140 was assembled by Sperry's Danbury shops in 1965 from a leftover IRT R33 shell, which resulted with the last 40 R33s rushed out to the World's Fair as single units ("Blue Arrows") for the Flushing Line. 34 of the leftover
shells were assembled and delivered by St. Louis Car as part of the R36 contract between late July 1964 and February 1965 and known as Main Line R36s (R36-ML).

I would recommend you to read more about the Main Line R36s here, as they are closely related to SRS 140.

Main Line R36 9534 in factory delivered red livery with yellow grab irons (same livery as IRT R29/R33) on Jerome Avenue line, August/September, 1964, inspired by the TTC "Gloucester" cars. The shell of SRS 140 would have been a R33 of the same red livery had Moses and the World's Fair not intervened.
Since my friend continues to chain smoke nonstop, she is probably an Alco.