It is still active; well at least there is no expiration date on the card.

I think I'll just sit back and let the "Huhs' pile up. Also I'll stand by for the cyberthieves to have a field day. Lest we note, you're looking at my given legal name.

Username
themallard
Posts
631
Joined
Fri Mar 19, 2004 6:45 pm
Location
New Jersey
by David Benton
Thu Mar 02, 2006 5:08 am
hmmm , i seem to remember rail travel cards in England , that would be around 1990 , when i was there . I think they were a pound , and you got discounts , and occassionally all you can ride days on the weekends .
but if Mr Norman has something else in mind , let the quizz continue .
Moderator worldwide railfan , Rail travel & trip reports
The only train trips I regret are the ones I didn't take.

Are you talking about the Rail Travel Card of the 1950's, where there was a credit card one could use exclusively for rail travel all overr the USA, or is there now another new version of this currently? The 1950's Rail Travel Card (I'm sure they actually started much before then) were widely advertised in the media a well as in timetabls, and I suspect they were THE original prototype credit card that all the others started emulating (like Visa, Master Card, etc). Too bad the granddaddy of them eventually folded and by the time of the late 1960's, except for a few enlightened railroad companies which had their own particular time payment schemes for tickets, any train tickets had to be in cash up front, while airlines were starting to accept the "copycat" credit cards for their travel.

Yes, some railroads did honor American Express cards, but these required full payment as per standard AMEX payment policies, while for some reason airline tickets only were permitted to be used for time payments on American Express. Having not been much in the USA since 1982 except for short visits while my mother was alive, I'm not sure what credit arrangements are for rail travel in the USA these days. With all the reasons given for shift from rail to air travel, I'm surprised that not much is spoken about this credit card dichotomy between air and rail travel. Yet I would think it had a major impact on the travel choices of many on the 1960's and 1970's where the big rail travel dropoffs began. The cost of travel is a big dent in one's salary, and credit facilities I'd have thought would have been self evident for any transportation company of any mode to facilitate time payments for its customers.

by David Benton
Tue Sep 30, 2008 3:49 am
by the late eighties / early ninites when i was travelling in the usa , amtrak was accepting all major cards over the phone as payment for amtrak travel .
But I see Mr norman has never ereplied as to wether your info on the rtc is correct .
Moderator worldwide railfan , Rail travel & trip reports
The only train trips I regret are the ones I didn't take.

by Gilbert B Norman
Wed Oct 01, 2008 7:23 pm
OK, at our Moderator's request, I shall expand my discussion of the Rail Travel Card.

Yes it was a paper ID card issued by an outfit called the Rail Travel Credit Agency with offices in Chicago Union Station. Presumably they made a credit check of applicants, but somehow i don't think it was too extensive. When I got mine during 1968, I essentially had no credit, not bad credit or good, just none. I was single and a Buck Sergeant in the Air Force; this is when I literally was "begging' in my Class A uniform to the manager at the Hill AFB bank to give me a Bankamericard (Visa). He did, but with an extremely low limit ($500; quickly raised when they learned i was a "good boy'). They simply didn't emboss on the spot major credit cards for college Freshmen the way they do today (or is it more a case of the way they DID pre Sep 15?).

Yet the RTC just showed up in the mail!!!

Now was it a credit card that would send you a monthly statement that you would pay in accordance with the agreed terms? Not quite. It simply meant that the holder had a "house account' with all of the participating roads which would individually bill you for charges on their road. The roads didn't seem to care how small the bill was. It still came with a heading such as "To: The Union Pacific Railroad Company; Dr. such was for a Salt Lake to Ogden trip. What if the road that sold you a ticket and the road operating the Diner were two different roads? well two bills, one for your transportation and another for your meals. Example, you bought a ticket to ride the CZ in Chicago and used the card for meals . The CB&Q would bill you for the ticket (rail and Pullman), but say the Diner on your CZ was a WP car? well you would also have a bill from the Western Pacific.

As Mr. Radzivanas notes, some roads such as the New York Central had had "enough" by the later 50's. They accepted American Express for a while, then scuttled that, but then later started accepting a regional card called Midwest Bank Card (hey, you live in New York - you got one of those?).

But somehow the card hung on into the Amtrak era, but by the time that Amtrak had assumed the functions of ticketing during 1972, they started to accept "all majors" and the RTC was history.

I could expand the discussion noting the accounting treatment of RTC transactions but such might appear that i am writing a textbook on railroad industry accounting practices. Finally, I have located my RTC and, if anyone with scanning equipment desires to post an image of such here at the topic, send me a PM with your mailing address and I will make a Xerox (whoops Minolta) copy of mine and send it off to you. There is no private information on it whatever.

by AgentSkelly
Thu Apr 21, 2011 1:50 am
I hate to dig up this thread, but a while back I had a conversation with a relative who had the RTC, and he mentioned you could request to have all transactions on a single bill; it required a really good reason as it all had to be funneled to a single office for billing and processing; mostly business travelers used it.
New Westminster to Amtrak 516, whats up with the extra 4 axles, over?

The PRR, and later the PC by succession, had a reasonably "mechanized' billing system. In this case, their system (expanded to include former NYC and NH trains) resembled a statement that was on a par with same from a national credit card issuer - including a remittance stub, pre addressed envelope, and your 'hard' copies of charges. Return of hard copies was customary during that era.

by AgentSkelly
Sat Jul 14, 2012 2:33 am
Sorry again for the update but my relative filled me in recently on how he found out about the "single bill"

He was at the reservations carousel at Penn Station; he was making arrangements for his next trip to Denver. He mentioned to the clerk he hated getting 5 different bills for every service he used while traveling all with different due dates and what not. The Clerk finished up his ticket, then pulled out some giant binder which he thinks was a procedure book for billing. The clerk said something like "Says here you can request central billing of your Rail Travel Card expenses by written request to Chicago."

He sent a letter out to "Chicago." He got a call from a employee at RTC week later, explained they will do central billing for him; just wanted to know which railroad he wanted to make the home for the bill. What this meant was that the railroad services he charged to the card would get sent to that railroad and they would be the point of contact for payment. So Pullman, Western Pacific, Great Northern, Union Pacific, etc would send the invoices to PRR then they would type up a single invoice for you and you would remit payment to PRR. He got the impression that PRR didn't grant you credit to the other roads but instead actually then sent individual payment to all parties.
New Westminster to Amtrak 516, whats up with the extra 4 axles, over?

by ExCon90
Fri Aug 03, 2012 3:25 pm
I just now noticed this thread. I well remember the bills that came in, the envelope stuffed with carbons stapled together. The best part of the whole thing was the float -- it might be months before you saw a bill. My favorite, however, was the New Haven card they had when I was living in New York around 1960. It was actual plastic, embossed with your name, and one feature was that it was good for a cash advance of $25 at any New Haven ticket office. Whatever amount you drew would appear on the next month's bill with no service charge, or interest, or anything. It made Grand Central Terminal into an ATM before there were such things. (This was in the era when you had to estimate your weekend cash needs very carefully in time to get to the bank on Friday or risk being cut off from your money until Monday morning.)

I never got to use it on an Empress Liner to Europe nor a CP Air ‘747 to Hong Kong but I did put it to good use on CP Rail’s Atlantic Limited and RDC Dayliners...... along with the occasional trip on The Canadian and CP Air ‘737s......... Also numerous CP Hotel stays.

Only wish now I had kept that piece of plastic as a souvenir after it was discontinued with the popularity of new Chargex (VISA) and MasterCharge cards. 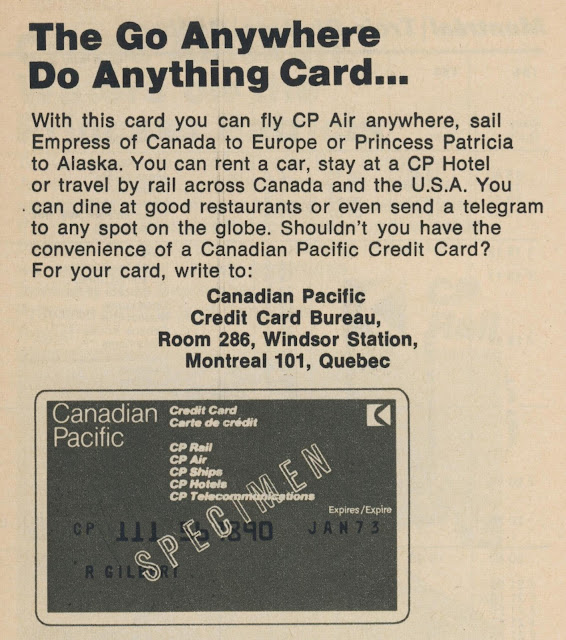 NS VIA FAN wrote:Just after I graduated I applied for a Canadian Pacific Credit Card......not only could it take me across Canada........ but around the world.

I never got to use it on an Empress Liner to Europe nor a CP Air ‘747 to Hong Kong but I did put it to good use on CP Rail’s Atlantic Limited and RDC Dayliners...... along with the occasional trip on The Canadian and CP Air ‘737s......... Also numerous CP Hotel stays.

Only wish now I had kept that piece of plastic as a souvenir after it was discontinued with the popularity of new Chargex (VISA) and MasterCharge cards.

Never used it on a CP Ferry in BC?
New Westminster to Amtrak 516, whats up with the extra 4 axles, over?

by AgentSkelly
Sat Aug 04, 2012 8:39 pm
Oh and for Mr. Norman:
You do not have the required permissions to view the files attached to this post.
New Westminster to Amtrak 516, whats up with the extra 4 axles, over?