by njtmnrrbuff
Wed Jan 11, 2017 7:35 pm
The idea of commuter rail is to transport office workers from the suburbs to their jobs in downtown sections of cities and right there, that's a huge step for Tri-Rail. I believe that many of the stations in the suburbs have office parks and other places of employment nearby that would probably benefit from half hourly service throughout the day.

by Gilbert B Norman
Mon Feb 27, 2017 7:37 am
I still envision "hue and cry" if Tri-Rail is to serve both the Airport and Downtown with hourly frequency. That means a train every half hour - a service level found only in New York.

Now the question becomes "how to serve the Airport without overservice? Could a, say, Hollywood-Airport "dinky" be initiated (a double slip switch to the North of the station), or something else that would avoid empty trains overserving the region?

by Noel Weaver
Tue Feb 28, 2017 12:27 am
I have been told different stories or maybe I should say versions as to what to expect. I have been told by a very good source that there is track material in the area around Iris in preparation for the new connection between the two systems. The new station (Miami Central) will have five tracks, three for Brightline and two for Tri-Rail which should work out quite well. Tri-Rail has a yard full of stored equipment in Hialeah. I think the best destination will be Miami Central but a good number of employees at MIA commute there by train and they will continue to be accomodated. Highway traffic around these parts is really bad and they expect big growth in ridership in the not too distant future.
Noel Weaver

by chrsjrcj
Mon Apr 24, 2017 3:28 pm
Tri-Rail will run 26 trains direct to downtown Miami via Iris, while the remaining 24 will continue as usual to Miami Airport. In order to maintain the 50 train a day service on the SFRC mandated by the Feds as part of the funding for the double tracking project, Tri-Rail will run 26 shuttle trains from 79th Street Metrorail to the Airport.

by Noel Weaver
Tue Apr 25, 2017 1:04 pm
Yesterday I had a converfsation with a Tri-Rail person and he pretty much said the same thing. They are shooting for running to downtown Miami before the end of the year. I think they have a shot at that goal. Construction is in progress at IRIS and Brightline is hoping to operate out of Miami to WPB sometime in September. He said the plan is to run trains downtown direct and serve Miami Airport with a shuttle train from Metro-Rail Transfer station (79th Street). I think this makes sense although 79th Street is not an ideal place to make a transfer, Fort Lauderdale or Hollywood would be better as the facilities are better and both are in a better part of town too. One thing for sure changes are coming. Now I would like to see a couple of late evening trains, you can't go to an evening concert or sporting event and get back to Broward County by train after the event ends. Maybe in the future they will address this too. OH by the way the 50 trains means 25 trains each way Monday through Friday, they run 15 round trips on Saturday and Sunday.
Noel Weaver

by Gilbert B Norman
Sat Apr 29, 2017 6:42 pm
Possibly, in addition to the point I made earlier regarding hourly service to both Downtown and the Airport simply represents "overservice", is that each of the three major airports within Tri-Rail's service area, MIA, FLL, PBI, are operated by different airport authorities. Tri Rail is funded both by the State and the three counties. While all are accessible by Tri Rail, two are accessed by bus transfer, one by direct rail service. Possibly the two with bus transfers felt they are adversely affected with employee attraction and retention, and throw in a passenger or two, with direct to one bus to the others service plan.

But the parties in interest are best served having some kind of rail service to MIA lest the "investigation into the investigations" begin.

MattW wrote:So direct Airport service will be gone? That doesn't sit well with me.

by Gilbert B Norman
Thu Feb 06, 2020 1:43 pm
Any updates on "what's the holdup". The track is there; NE Quadrant SAL-FEC (Iris) has been done for some time. SW FEC Quadrant has "always been there". Miami Central signage "Tri Rail coming soon" remains in abundance.

Gilbert B Norman wrote: ↑Thu Feb 06, 2020 1:43 pm Any updates on "what's the holdup". The track is there; NE Quadrant SAL-FEC (Iris) has been done for some time. SW FEC Quadrant has "always been there". Miami Central signage "Tri Rail coming soon" remains in abundance.

My apologies if you've seen this already; the latest piece of news looks to be from this Miami Today News article from last December.


The South Florida Regional Transportation Authority, Tri-Rail’s parent, must wait for Florida East Coat Railway, which owns the Brightline commuter service, to have its Positive Train Control (PTC) system certified by the federal government before it can move forward.

PTC is a federally mandated safety system that must be installed and running in all US trains and along tracks by December 2020. The system Tri-Rail uses isn’t consistent with the one Florida East Coast Railway uses, but there are ways to make them interoperable.
...
Brightline hasn’t given Tri-Rail officials any indication of how the process is going, Mr. Abrams said this week.

Looks like PTC is the culprit? According to this Progressive Railroading article from late February, the FRA has stated FECR/Brightline/Virgin at risk of not completing PTC installation by the end of 2020.

To evaluate the risk of noncompliance, the FRA considers the following factors in addition to the railroads' own status reports: the percentage of mandated route miles currently governed by a PTC system, including revenue service demonstration (RSD); any unresolved technical issue in implementing a compliant PTC system; the percentage of a host railroad’s tenant railroads that have achieved interoperability, as required; and a host railroad’s expected date to submit its PTC Safety Plan to FRA, as required to obtain PTC system certification.

The FRA's PTC status report also found that of the 42 railroads required to implement the technology, most are operating their systems in revenue service or in advanced field-testing or RSD, FRA officials said in a press release. 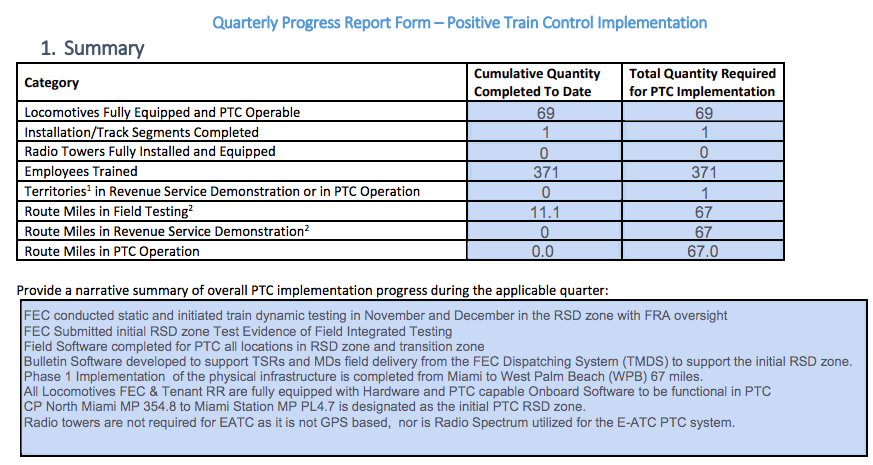 According to page 13 of the 2019 annual report, FECR is/was planning to submit a PTC Safety Plan in June 2020. Going off of the two articles, it sounds like once FECR's safety plan is submitted (Does anybody know if FECR is still working on PTC right now? Wouldn't be surprised if it was delayed with Covid-19 and all), the FRA will certify FECR's PTC, then Tri-Rail/SFRV can apply to use FECR/Brightline/Virgin trackage in Downtown Miami. It also sounds like FECRs testing for PTC is behind where the FRA would like it to be, since up to the end of 2019, field testing had only occurred on a portion of the route, and using PTC in revenue service had yet to begin.

by JasW
Tue Jan 12, 2021 3:07 pm
The FRA announced last week that there had been "full implementation" by the 2020 EOY deadline, which presumably includes FEC/Brightline. So what if any hurdles does SFRTA face in applying for use of the tracks downtown now?

by nomis
Wed Jan 13, 2021 1:38 pm
I believe they are no longer held within the FRA metrics since they discontinued operations, and will need a fully functional PTC system to operate any trains.

This footnote was at the bottom of page 1 of this PDF about FEC / Brightline status. This seems to match what I remember from the end of March, when they shuttered operations. (If I find those articles from the main Brightline thread, I'll post it here)

In a letter and revised PTCIP submitted in April 2020, Florida East Coast Railway (FECR) and Virgin Trains USA (VTUSA) confirmed VTUSA ceased passenger rail service as of March 26 and therefore FECR’s lines are no longer subject to the statutory mandate. As such, FRA removed FECR from these graphics.

Aside from that, there may still need construction on either the IRIS connection, or at MCS station. My last time in Miami (April 2019), still had some construction at MCS for platform tracks 4-5.
Moderator: Railroad.net/forums
Avatar: An overnight trip on Girard Ave. stumbles upon 6 PCC's and an LRV stuck within two blocks.

by checkmatechamp13
Sun Jan 09, 2022 8:03 pm
There is a concern about the gap between the platform and train and also whether the structure can handle the weight of Tri-Rail trains: https://www.thenextmiami.com/another-pr ... ide-heavy/

by Pensyfan19
Mon Jan 10, 2022 12:13 pm
I think the station can handle the weight of the Tri Rail coaches. Even though Brightline suggested modifying the coaches for Tri Rail, I don't see why a platform extension wouldn't work in this case.
"Look down, step over, and watch the gap!" - Dr. John Clarke, The Gap Rap (2010)