I note with some sadness that the former Nationwide wanderings of AOE are now limited to:

Albuquerque to Jackson Hole by way of Barstow, Las Vegas, and SLC (3 1/2 turns per year, April, May and June, and 1 SB trip in August).

AOE at least got the info right! I notice that Rader describes the Dome car as built by Budd in 1953 for the Southern Pacific Daylights. Hmmm... The last time I checked Mr Pismobum Ainsworth's wonderful DOMEmain site, SP home built 3/4 domes and never had a full dome!

Username
John_Perkowski
Posts
5511
Joined
Wed Mar 17, 2004 5:12 pm
Location
Off the Q main near Parkville MO
by David Benton
Wed Dec 27, 2006 5:34 pm
John , What is so special about Jacksons Hole ? I've never heard of it .
Moderator worldwide railfan , Rail travel & trip reports
The only train trips I regret are the ones I didn't take. 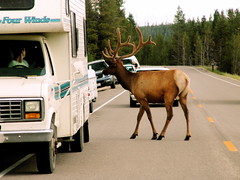 
Train travel to Yellowstone National Park began in 1883 with the completion of a spur line of the Northern Pacific Railroad from Livingston, MT to Cinnabar, MT Located north of Gardiner, the official North entrance to the Park, Cinnabar would serve as the terminus for the NPRR until 1903 when the line was extended to Gardiner and new facilities built.

In 1898 the Oregon Short Line Railroad, a subsidiary of the Union Pacific Railroad, began its Yellowstone service with a connection at Monida, MT, some seventy two miles west of the park. A visit by UPRR officials in 1905 would lead to an extension of the line from Ashton, Idaho to the west boundary of the Park. Finished in late 1907, the new line began service in June 1908.

The Chicago and North Western got into the Yellowstone business in 1921 with connections from Lander, Wyoming. This necessitated a one and one half day drive to reach the park via the South entrance.

The last of the five railroads, the Chicago Milwaukee and Saint Paul, would begin service in 1926 from its new Gallatin Gateway Inn eighty miles north of the park near Bozeman, Montana. It would bring its passengers along the Gallatin River and through the west entrance.

These five railroads would operate their service to the park through 1960. The 1920’s and 1930’s were the biggest years for rail travel to Yellowstone but by the mid-1930’s the private auto was already surpassing rail traffic. After World War II travel by rail dropped dramatically everywhere in the United States. People were turning more and more to their own cars. The Chicago and North Western had not lasted long: they were out of the Yellowstone business by 1932. Of the other four, the Northern Pacific; the Chicago Burlington and Quincy; and the Chicago Milwaukee and Saint Paul lasted until approximately 1953. The Union Pacific Railroad would last through the 1960 season before ceasing operations to Yellowstone. The private automobile had supplanted the age of rail travel to Yellowstone National Park after seventy-seven years.

Username
UPRR engineer
by David Benton
Thu Dec 28, 2006 2:38 am
thanks for the info and pictures UPRR Engineer .
I have been to Yellowstone , I took the Train from Seattle to Pocatello( ???) , Then hired a auto from a cheap hire place to get up to te park . The steering column of the car started smoking when i stopped to get gas , but the owner cheerfully brought me another car to replace it . it was my first experience of driving large american cars , on the right side of the road . I camped out in my tent , also my first experience of having to worry about bears and snakes . ( we have neither ) . back to the train station , the train came thru about 3 am in the morning , but the station had great big wooden seats , ( i would call them pews ) , where i laid down and attempted to get some sleep . unfortunately some young lady kept trying to lecture me about the great American system called free love , and i felt obliged to argue that it was not an exclusively american idea , and most of the rest of the world was reasonably free as well .
all in all an interesting trip .
Moderator worldwide railfan , Rail travel & trip reports
The only train trips I regret are the ones I didn't take.

Username
David Benton
Posts
9484
Joined
Thu Mar 11, 2004 11:29 pm
Location
New Zealand
by Scoring Guy
Tue Jan 02, 2007 4:23 pm
I was on the AOE (aka GLR) "Golden Rail Express" trip in November from Seattle to Denver, via Oakland (a special four night, on board, position move which included a tour of S. F. and the Colorado Railcar plant in Fort Lawton (north of Denver).

Mr. Rader gave us quite a talk about the future, but next year is sort of a regrouping year using just one trainset and limited mileage, western, trips, as AOE was losing money with two sets and long trips.

One reason for the Jackson Hole deal is so that the train can get underway with a new group, which has been in that area for a couple days, and the group getting off of the train can then tour that area for a couple days before ending their tour, i.e., better utilation of equipment vs the old itinerary of running down to Salt Lake City, to get a new group, and starting a new tour from there (if you check the actual dates of the '07 tours, you will see the overlapping).

Mr. Rader has visions for the future of the train returning to other parts of the country in '08 and beyond, including trains thru the south in the winter time, and even in Alaska. He also has visions of incorporating his two story cars (as sleepers and lounges) into the consists, similar to his original idea of his "Golden Eagle, Santa Fe Express, Grand Luxe" from about six years ago - there are still two mock-ups of those cars in the yard that were used for promotion photos (that Golden Eagle train was planned for the back of Amtrak's coast to coast express car train, until Amtrak got out of the express car business). By the was his assembly line was full of those two story commuter cars for Florida.

The two full domes that the GLR uses were ex-GN cars from the Empire Builder (one was CB&Q owned at that time), both of which AOE purchased from Amtrak in about '01.

I then did a road trip from Denver to Chicago, following the route of the California Zephyr, looking for the remains of any depots. Very interesting and fun. The sadest thing, was seeing that Burlington Depot in Omaha just wasting away, unkept. Sad Sad Sad.

Username
gprimr1
Rank
Site Admin
Posts
3969
Joined
Sat Apr 01, 2006 12:39 pm
Location
Towson Maryland
by David Benton
Sat Jan 13, 2007 1:50 am
good question . I would say that , given the likihood of some influential people riding it , it would be unwise for the railroads to muck it around too much .
would be interesting to know how different its contract s differ form Amtraks .
Moderator worldwide railfan , Rail travel & trip reports
The only train trips I regret are the ones I didn't take.

In the USA, the AOE usually runs as an Amtrak special with Amtrak loco's and engineers (plus "guides" on non Amtrak routes).

Therefore, there's really no more expectation of "on-time" than if it were a scheduled Amtrak train. However, there's usually lots of wiggle room built into the AOE routes, and more often than not the train serves as the hotel at the various destinations, so getting to a particular stop on the route isn't as much of a priority, as it would be on a reular Amtrak train filled with passengers, each with their own travel agenda.

On my "Golden Rail Express" trip mentioned above, we ran a slightly later schedule than the Coast Starlight, (from Seattle) arriving at Emeryville, mid-morning where we took a shuttle bus into S.F. for the day,,, we then returned to the train (now parked in the Oakland Amtrak yard) to spend the night.

By design, the trainmaster wanted to follow the Amtrak CZ from Oakland to Denver, but a broken rail, in Nevada somewhere, held us both up, to the point that we didn't depart Salt Lake City until 9am, and didn't arrive into the Glenwood Springs until after dark. We spent the night aboard the AOE parked in the Denver station, and then ended the trip the next morning with ther tour of Colorado Railcar plant. Having been on the CZ many times before, it was kind of interesting to see areas which are usually dark when the CZ passes through.

So the answer is that the AOE gets no better treatment than a regular Amtrak train, but the scheduling takes that into account.

Username
Scoring Guy
Posts
140
Joined
Tue Jan 18, 2005 11:08 am
Location
Onalaska, Wisconsin
by Scoring Guy
Fri Feb 23, 2007 11:55 am
You can check the 2007-1 issue of the reconstituted Passenger Train Journal for another point of view on the tour of the Colorado Railcar plant.

I was disappointed that the authors didn't have any photos of the production line where the two-story DMU's were in various stages of completion or photos of that business car being refurbished. The photo shown of the Grand Luxe interiors were taken in the mockup's (the two rust & yellow colored cars shown in the center of the arial photo just above the rear peek of the building). These non functioning cars were built for photo/promo purposes (back when the idea for the American Eagle, Santa Fe Express Grand Luxe was proposed). Neither car has any exterior skin, but were rather sprayed with a coat of foam. The interior of one car had bedroom setups on one end of the upper level and dining room setups (with the prop harp) on the other end of the upper level - the lower level was unfinished. The other car had part of the upper level finished with lounge furnishings, while the lower level had only that area below the hole in the floor (with the railing) of the upper level, finished off with the piano and dance floor (below). Some strategic camera locations, and some fill in with background scenery makes for impressive pictures. I was also in the Charleston sleeper with thre new bedroom interiors, and I'm sorry to say that the vintage beds on my previous AOE trips were much more comfortable than the new fangled beds - Mr. Radar said they are working on that issue.

The DMU's have a drive train (w/driveshafts) similar to the Budd RDC's, and the diesel engines are mounted on slide-outs under the lower level for ease of maintenance - pretty slick!