by CN9634
Wed Jun 02, 2021 8:06 pm
In my laziness, can someone confirm if in fact MaineDOT owns the roundhouse? I need to quickly contact the owner

by CN9634
Sat Jun 26, 2021 12:49 pm
Turnover set to happen this Fall assuming all goes well. Finger Lakes owner or CEO? owns a house up in the Midcoast of Maine allegedly so that might make some sense.

by JBlaisdell
Mon Jul 19, 2021 6:22 am
I noticed a new industrial building or warehouse going up next to the line where it crosses under Rte 1 at the Brunswick/ Bath line. It looks like it's going to have an indoor siding. It's good to see potential new traffic on this line.

I always thought the dirt lot at Cooks Corner directly adjacent the tracks was a prime transload site waiting for development, with the extinction of homegrown shortlines in Maine underway, it could be an opportunity for a smaller opportunity with some out-of-the-box thinking to do some more business in the Brunswick area (think maybe Grimmels could work out as well)

by MEC407
Mon Jul 19, 2021 1:12 pm
Did Finger Lakes officially get chosen as the new operator or are we still waiting for an official decision? Were there any other bidders, and if so, who were they?
MEC407
Moderator:
Pan Am Railways — Boston & Maine/Maine Central — Delaware & Hudson
Central Maine & Quebec/Montreal, Maine & Atlantic/Bangor & Aroostook
Providence & Worcester — New England — GE Locomotives

by Shortline614
Mon Jul 19, 2021 7:41 pm
At this moment, Finger Lakes is just one of the bidders. The only reason we know they are interested is because a couple of their high railers were spotted along the line a month or two back. No official word about the Rockland Branch from anybody.
Barbecuing in Chessie's backyard. Host of "Shortline's Rail News & Comment."

by JBlaisdell
Sat Aug 07, 2021 4:22 pm
I am living in Brunswick now, just south of downtown. I have heard trains a few times recently, I assume they are from over towards Cooks Corner and not Amtrak, since the crossings are all silent from Maine Street west.

Last week, I was at Hannaford's by the Amtrak depot and saw an eastbound with covered hoppers. I've seen the same type of cars sitting on the siding east of Church Street. Today, I was at Shaw's around noon and caught a westbound run of covered hoppers. I was able to scramble across the parking lot and up onto the cut to get a picture with my phone. Glad to see there's some traffic on this end.

Also, it looks like they've started grading the spur for the new customer alongside Rte 1 by New Meadows Rd. 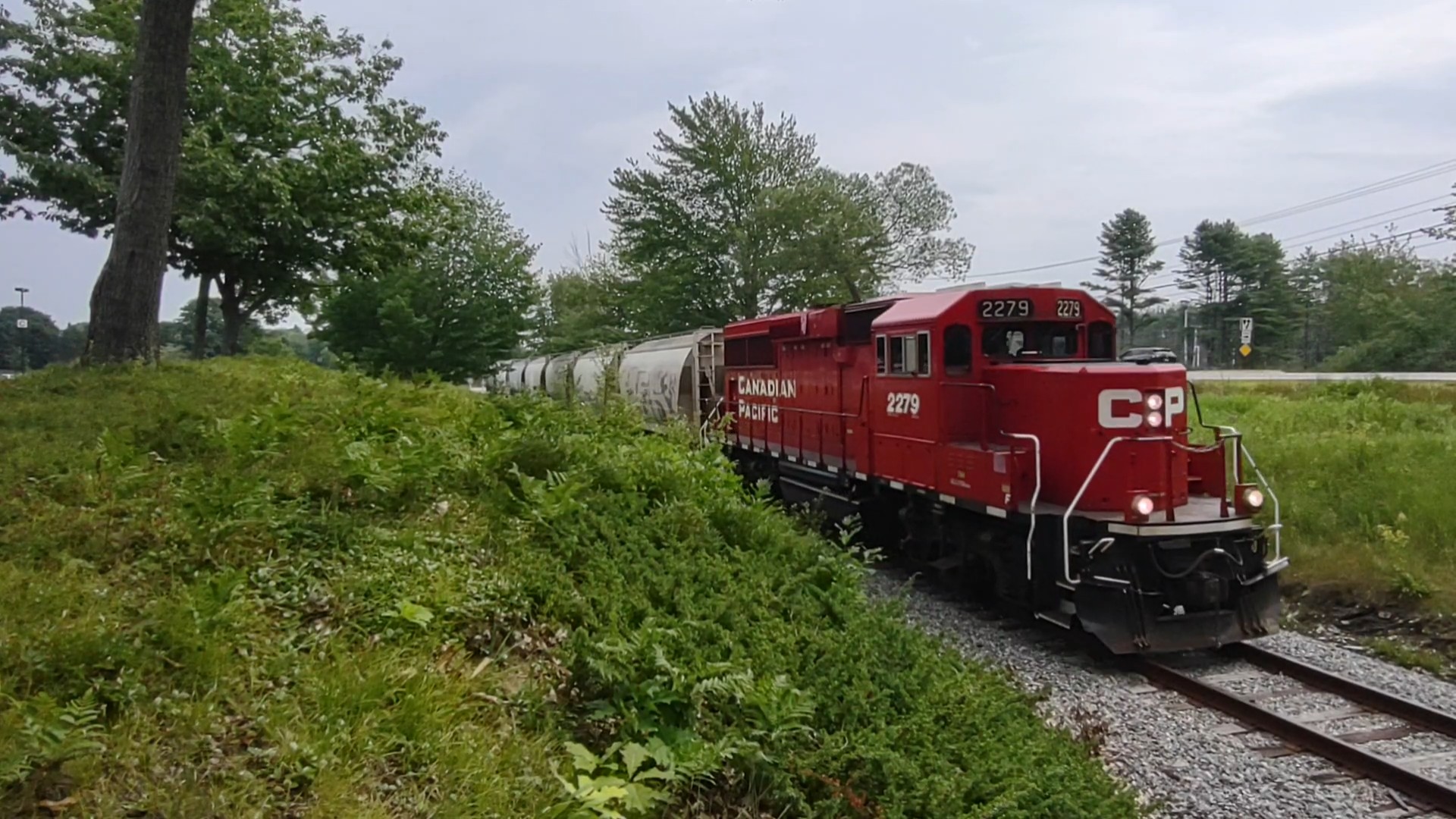 by gokeefe
Tue Aug 10, 2021 7:24 pm
Finger Lakes also runs excursions. I would keep my eyes open for that possibility if NNEPRA can't get permission from Amtrak to run best year.

Interesting news, which I have no doubt was part of the FGLK decision to move here, Dragon is shutting down operations at the Rockland wharf due to aging equipment both railcars and the barges. See article linked:

I heard a few years back that this setup was showing its age and it would cost an arm and leg to replace, so this makes sense. Also, if Dragon owns the land which the article indicates they do, then they are sitting on a re-development gold mine given the current real estate market in Maine and condos (B&M Baked beans also considered moving their entire plant for the same reason).

So a few thoughts.... at full capacity, Dragon produces enough carloads for ~7000+ per annum. Even if 5000 or so went by rail, on a 5-day work week (factoring in holidays) that's about 20 cars a day. On top of that, you have the perlite, which is busy about 2-3 carloads per week, as well as the existing steel and new steel coming online... Finger Lakes likely is in a good position to be busy and make some money on this line. I believe the lease from the State is basically $1 a year as well.

Lastly, I heard that 2 other customers are interested in the line. Previously I've heard 'fish food' in reefers coming into Rockland, as well as Amerigas in Waldoboro, but those are speculations on my part... could be a whole new development or something else entirely.

In any case, I think this is a good development, especially with the Class I rise here in Maine, we'll have a healthy and sustainable shortline operation with plenty of runway for growth. Who knows, maybe they'll take on the Lewiston Lower to Grimmels, as well as the Low Road for any future growth there.

by newpylong
Thu Aug 19, 2021 3:23 pm
I don't know the area very well, but checking out Google Earth, the two spurs to Birch and Bailey Points to electrical substation(?) are fascinating. Especially that one to Bailey, that thing is a branch in its own right!