CN failed to anticipate the number of groups which would have to be appeased, and put a deadline on the Transtar contract of Dec 31, 2008. They aren't going to make that deadline, because environmental review won't be ready until next year. Transtar has announced that it will not extend the deadline. (I'm guessing they're planning to get a better offer.)

This is just stupidity on Hunter Harrison's part. He should have known that the deal might take significantly longer to close -- if they'd insisted on a longer deadline originally, they might have been able to get through all the paperwork.

by byte
Mon Sep 22, 2008 2:57 am
I'm not sure who all would be interested in buying the J. Geographically speaking, if all the railroads in Chicago had the opportunity to purchase the route, CN is the one which gets the most benefit out of it. Maybe Metra as well, but only if Phil Pagano manages to find a magic pot of subsidies under the rainbow.

What I think will happen (and this is just one guy's opinion) is that TranStar will "re-negotiate" a new deal with CN, and considerably up their profit margin on the sale in the process.

All in all, it's a real shame the NIMBYs got so far with this one, though it's not likely a question of if big red CN engines will be growling through Barrington, but a matter of when.
That old car might be worth money!

You know, volks, I really have "achie breakie heart" for the folk who bought their McMansions up in Barrington on the strength of "oh that is just a little rickety freight line in your backyard" will be sobbing. Now that its "captive' USSteel traffic is greatly diminished, the "J" was a natural for the CN to seek affording them a one carrier routing arouund Chicago for their otherwise WC-Chi-IC traffic..

If I read this correctly, it appears that the NIMBY's will not have an audience with Surf Board, and I guess a J-CN merger will now move forth. Good news for those of us who have been observing industry affairs "for a long time"; even better news for us who were within the industry during its "darkest ages" of the '70's. Speaking for myself, even though I left the industry for a "third career" as a CPA in private practice (retired five years ago; first career, USAF) at end of 1981 and I have not actively railfanned in some twenty five years, I still follow industry affairs. It is indeed gratifying to see the railroad industry enter its "Second Golden Age".

Finally, I would not rule out watching CN making a play for the KCS; in view of their existing Mexican railway interests, there would be your true North South 'Pan American Railroad'.
Last edited by Gilbert B Norman on Wed Oct 01, 2008 7:30 pm, edited 1 time in total.

by Tadman
Tue Sep 30, 2008 9:54 pm
GBN mentions USS online traffic - how does EJ&E traffic today compare not only with projected CN traffic in a few years, but also compared to EJ&E traffic in times past when Chicago was a busier manufacturing center, and there were many more USS properties in town, such as South Works and Joliet Works, amongst others? Could the case be made that today's low traffic levels are just a lull between busier times when Joliet and South Works were open as well as the existence of >5 class I's using EJ&E to interchange amongst themselves?
Dig the new rr.net Instagram account: @railroad_dot_net

The EJ&E is Official CN property.

CN gets a nice christmas present.

I understand the 2 crossings to be with US 30 & US 34. Perhaps CN can apply for some stimulus funds to move this project along?
Glenn Woodle

CN petitioned the STB for fast action, was denied and recieved the approval only today (12/24/2008).

STB decisions need to be published on the Federal Register for 30 days before becoming final, thus a closing cannot occur until 1/24/2009.

CN will need to get an extension from U.S. Steel, whom I would think will now be under tremendous public (and congressional pressure ((Dick Durbin)) to deny the extension.

The sale price however is a nice chunk of change ($300 million).

by atsf sp
Fri Dec 26, 2008 8:55 pm
Not another American shortline to fall to a Canadian Class 1. I saw the ICE and DME before they fell. But not the J. Except for a preserved steamer.

"Why would you take a train to go see another train?"
Some people just don't understand.
My Photos

CN petitioned the STB for fast action, was denied and recieved the approval only today (12/24/2008).

STB decisions need to be published on the Federal Register for 30 days before becoming final, thus a closing cannot occur until 1/24/2009.

CN will need to get an extension from U.S. Steel, whom I would think will now be under tremendous public (and congressional pressure ((Dick Durbin)) to deny the extension.

I doubt this will mean anything at this point. I have a feeling Transtar came up with the deal deadline partly just for some leverage in getting CN to be more serious about the merger. The approval has been announced and with being so close to closing I doubt the J's people would want to risk setting things back up to possibly another year or even not getting anything at all, especially with the government regime change coming up and the economic slowdown right now. Not like they will be able to increase the price too much at this point either.

Side note, Transtar just recently took down a lot of job postings on their site, not just for the J, but for most of their transportation businesses.
-C h r i s
Member of Fox River Trolley Museum
My Photography

by mrconductor55
Tue Jan 20, 2009 10:25 pm
Well I went and got my first and probrably last J Shots yesterday. I rode Metra down to Joliet yesterday and rode my bike over to EJE Joliet yard. SW1200's 322 and 306 were switching the yard.Thats my kind of Power!

It was great seeing these two old switchers MU'd together, dragging cuts of 30+ cars around. It would have been cooler if there was only one, as One could handle the work, It would just smoke more. These units didn't break a sweat. 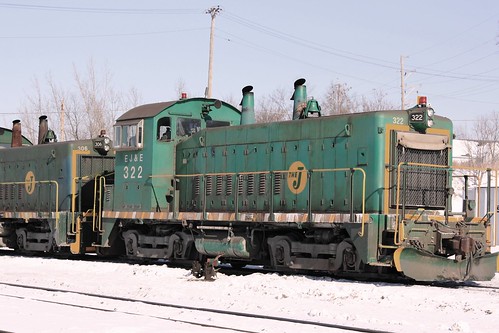 sschelle wrote:STB decisions need to be published on the Federal Register for 30 days before becoming final, thus a closing cannot occur until 1/24/2009.

Anymore word on if this closing will occur since we have three days till the dealine.
"Why would you take a train to go see another train?"
Some people just don't understand.
My Photos

by Gilbert B Norman
Fri Jan 23, 2009 9:13 am
According to WBBM 780 during the 5AM hour, the last ditch effort in Federal Court to overturn the STB Decision in favor of the acquisition has been denied:

Even if the affected parties "vow to fight on', it appears the deed is done.

To the 'aggrieved McMansionites" of Naperville and Barrington, "sorry bout that'. We've all taken out hits with our investments nowadays - be assured that to do an end-of-month "price up" of my portfolio today will not be a pleasant task.