I am looking for information on the ROCK ISLAND Twin Cities operations such as the line up from Inver Grove Heights into St Paul. I know there was a bridge across the Mississippi River into Newport.

Did the RI have their own line into ST Paul or was it trackage rights?

Did the RI have their own yard in St Paul and if so, was it right next to the Milwaukee Road Pig's Eye yard?

Also, did the RI run transfers to all of the other railroads in the Cities or did they use the MN Commercial for this?

Username
BIGO
by DMCenci
Thu Jan 17, 2008 4:23 pm
The Rock had 2 yard in the area. "Inver Grove" in Inver Grove Heights (between 65th Street and Gun Club RD)..and "State Street" yard..between Barge Channel RD and Plato Blvd. UP still uses "State Street"..but 90% of Inver Grove is gone.
I know the "Belt" yard at Hoffman was originaly a CGW yard..I have heard it was also CRIP..so I am not sure on that one.

The Rock used trackage rights into St Paul via Newport and the CGW bridges at St Paul at South St Paul (for the "belt").

They ran transfers to SOO, (Cardigan Junc), Milwaukee Road (Pigs Eye), BN/CBQ(Daytons Bluff)..not sure where the GN or NP tranfters went early on. They may have used the Minnesota Transfer (predecessor to the Minnesota Comercial).
Dave C

by century430
Sun Jul 13, 2008 4:44 pm
Was State St. Yard the one adjacent to Pig's Eye? Also, I've seen pictures of teh CRIP passing through the Bluffs area along the river. Who owned this section? Was it the Milwaukee?

Re: Rock Island in the Twin Cities

by Minneapolitan
Thu Oct 27, 2011 12:39 am
I'm giving this thread a "bump" because there's good questions here that could use further explanation.

It is important to understand that this is a strange area geographically.
A good look at the South St. Paul area on Google Maps will help.

First off, "South St. Paul" is different from the area south of downtown St. Paul, known as the West Side because it's on the west side of the Mississippi River. Likewise, the West Side of St. Paul is not to be confused with the suburb of West St. Paul.

The West Side of St. Paul (south of downtown) is a large, flat floodplain dominated by an airport and new industry. Of course, it never used to be this way. The area used to be a very old working class neighborhood, predominantly Jewish. This is where Rock Island's State Street Yard was located, along with a CGW yard just south of their lift bridge across the river and under Robert Street. In 1961 this entire area, over four hundred acres, were leveled and cleared in an epic urban renewal plan by the St. Paul Port Authority to create a massive industrial park. The entire area was wiped clean off the map, including many whole streets. As far as I know, Rock Island's yard eventually went with it. Some track still exists to serve the industrial park, but are merely industrial spurs operated by Union Pacific.

South St. Paul lays further down the river on the same side. It is NOT a suburb. Until the decline of major meatpacking in the US in the 1970s, South St. Paul was one of the largest stockyards in the US, along with Chicago, East St. Louis, Kansas City and Omaha. The primary meatpacker here was Armour, and the yards were served primarily by CRI&P and CGW. Because of the volume of freight moving in and out of these packing houses, Rock Island had a yard on each side of South St. Paul, and CGW had a second yard just north of the stockyards, as St. Paul was the northern terminus for both railroads. Even though Chicago & Northwestern favored their newly-acquired Rock Island route south from St. Paul over their former CGW route, C&NW used the CGW yard as one of two gateways into the Twin Cities (the other being their own yard in Shakopee, MN). Today, Union Pacific operates exactly as C&NW left it. This means BOTH Rock Island yards are completely gone, contrary to what that other guy said.


BIGO wrote:Did the RI have their own line into ST Paul or was it trackage rights?

This is Rock Island's famous "Spine Line" from St. Paul to Kansas City via Des Moines. Between St. Paul and Des Moines there is a town called Manley, Iowa (just north of Mason City), where the line split to Chicago. Needless to say, the entire Rock Island system funneled into St. Paul on one route. Closer into the Twin Cities, the Rock Island went north from Northfield through Farmington, Rosemount, and then northeast into the Mississippi valley to Inver Grove Heights, South St. Paul, and St. Paul. As I stated above, Rock Island had a yard on St. Paul's West Side. I believe this was the only CRI&P actual property within St. Paul city limits.


BIGO wrote:Did the RI have their own yard in St Paul and if so, was it right next to the Milwaukee Road Pig's Eye yard?

This is misleading. Rock Island's Inver Grove Yard was between 65th Street and Chestnut Street. Locally, this part of Chestnut is known as "Gun Club Road," but you won't find that on most maps. Besides, there's another "Gun Club Road" a few miles away. Inver Grove Yard is not 90% gone. It's 100% gone. At this location, there is also an abandoned dual-level swing bridge across the Mississippi River. This was Rock Island's connection to the east side of the river and its industries, including the Marathon Oil refinery and a steel mill, as well as its connection to the CB&Q and Milwaukee Road. Through the CB&Q, of course, Rock Island transferred with CB&Q parents Northern Pacific and Great Northern. 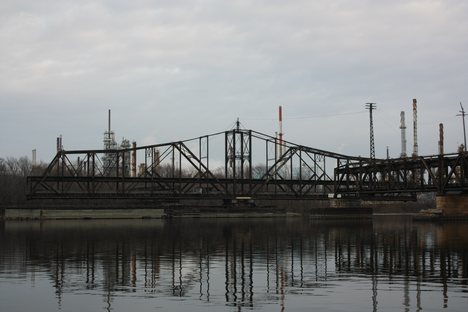 Milwaukee Road's Pig's Eye Yard is on the east side of the river, southeast of downtown St. Paul. Today, this is Canadian Pacific's primary classification facility in the Twin Cities. The engine shops are still active. Immediately next to Pig's Eye used to be CB&Q's Dayton's Bluff Yard, its entrance into the Twin Cities. Immediately south of Pig's Eye Yard, also on the east side of the river, is another UP yard. This is CGW's "Belt Yard," which connected to its own South St. Paul Yard with another swing bridge across the river. It was built to handle direct interchange with the other railroads in this area (collectively referred to as Hoffman).


BIGO wrote:Also, did the RI run transfers to all of the other railroads in the Cities or did they use the MN Commercial for this?

DMCenci wrote:They ran transfers to SOO, (Cardigan Junc), Milwaukee Road (Pigs Eye), BN/CBQ(Daytons Bluff)..not sure where the GN or NP tranfters went early on. They may have used the Minnesota Transfer

As I explained above, Rock Island's bridge across the river allowed them to run their own transfers to many of the Twin City railroads. Because the Minnesota Transfer (now Minnesota Commercial) served so many industries in general, it is logical to assume they interchanged blocks of cars that the Transfer could then send to either other railroads or Transfer industries.


DMCenci wrote:I know the "Belt" yard at Hoffman was originaly a CGW yard..I have heard it was also CRIP..so I am not sure on that one.

I'm also unsure about that one. I don't think so, but it's possible. I'll be looking into it.


century430 wrote:Was State St. Yard the one adjacent to Pig's Eye? Also, I've seen pictures of teh CRIP passing through the Bluffs area along the river. Who owned this section? Was it the Milwaukee?

Good questions. The first I've explained quite thoroughly. As for the bluffs, I believe this stretch (also known as Hoffman) is jointly owned and operated by CP and BNSF, with UP and Amtrak having trackage rights. This joint ownership would likely go back to Burlington Route and Milwaukee Road. Northern Pacific had shops not far from here, between the bluffs and St. Paul Union Depot.
Nickel Plate Road should have merged with ERIE.

by mtuandrew
Thu Oct 27, 2011 1:19 am
A slight clarification: the Rock Island and the Milwaukee Road maintained a joint line from Northfield to Rosemount. From there, the Rock built down the east side of Dakota County into the west side of St. Paul, and the Milwaukee used its original line around Mendota Heights and the joint Milwaukee/Omaha bridge to get to downtown.

BNSF and CP Rail have maintained joint trackage rights since the CB&Q finished its line in the 1880s, from St. Paul all the way to the interlocking opposite Hastings. Unloaded trains (and Amtrak) tend to go up the ex-Milwaukee with higher grades and a more direct route, while laden trains follow the ex-Burlington with its more gentle climb out of the valley.
Moderator: General Discussion: Passenger Rail,
DC-MD-VA Passenger Rail and Amtrak

by JayBee
Mon Oct 31, 2011 11:14 pm
The trains photographed with Rock Island locomotives passing through Hoffman Ave. Interlocking, was Soo Line's Transfer 4, which by agreement used Rock Island power and a Soo Line Crew and Caboose. Right up to the Rock Island shutdown the Soo Line and RI had a lot of interchange at the Twin Cities, much of it was forwarded to the DW&P at Duluth. Once the RI shutdown, loss of traffic caused the Soo to shut down their direct line to Superior, north of Danbury, WI and route the remaining traffic via the long way through Ladysmith, WI.

by wjstix
Tue Dec 04, 2012 1:24 pm
Just to follow up on Minneapolitan's post. In the pic of the old Rock Island bridge, Inver Grove is on the right (west). To the east, the track connects with the joint Milwaukee / CB&Q line running between the west bank of the Mississippi river and Highway 61. Rock Island trains heading north would swing to their right (northeast) over the bridge, then turn left (northwest) to follow the river up to downtown St.Paul.

Oddly enough, I was in the Inver Grove area a couple of days ago, and there is a sign pointing toward the river saying "Rock Island Bridge". The west bridge approach is being used to allow folks to walk out over the river.