by dkgrubb
Fri Dec 17, 2004 3:25 pm
Does anyone have any interesting stories to tell about the West Maryland Railway and Maryland Midland in Thurmont, or nearby, such as at Blue Ridge, or Penmar? Thanks so much!!
Keith

Username
dkgrubb
by hutton_switch
Mon Dec 20, 2004 7:51 pm
The DC Chapter of the NRHS (of which I'm a member) sponsored railfan trips over the Maryland Midland this past April and October. The April trip went from DC all the way to Hagerstown (through Thurmont up over Blue Ridge Summit) and return via the B&O Metropolitan Branch. I was on this trip, and although long, hot, and short on restroom facilities, it was enjoyable. The October trip went only as far as Thurmont. The April trip was the first passenger equipment to travel those rails in fifty years.
Wade Rice
Member, B&O RR Historical Society
http://www.borhs.org
Daniel Willard (1860-1942) and Jervis Langdon, Jr. (1905-2004) - Two of B&O's best presidents and managers!
President Leonor Loree (1858-1940) brought the B&O into the 20th century!

Username
hutton_switch
Posts
223
Joined
Sat Mar 13, 2004 6:41 pm
Location
Feasterville Trevose, PA
by dkgrubb
Tue Dec 21, 2004 9:10 am
Thanks Mr. Rice,
Do you have any information on future excursions on this rail line? I would really enjoy riding from DC all the way to Hagerstown, even if the ride is long. Thanks so much for any help you can give,
Keith

Username
dkgrubb
by dkgrubb
Tue Dec 21, 2004 9:11 am
Also, do you have to be a member of the DCNRHS to ride the excursion?
Thanks,
Keith

Username
dkgrubb
by hutton_switch
Thu Dec 23, 2004 12:08 pm
I don't know if and when the trip all the way to Hagerstown will ever be offered again, despite its success. The one to Thurmont, at least in my mind, stands a better chance of being offered again regularly as opposed to the one to Hagerstown (the Thurmont one is on again for fall of 2005). Such large scale excursions sponsored by the DCNRHS use leased MARC equipment, and the coordination amongst all the participating entities can get quite involved. And these trips nearly always are not trouble-free, particularly when it involves equipment that's traveling trackage it wasn't designed for, or if something comes up that wasn't anticipated during the trip. After such trips, rumors usually fly rampant where one party or another involved threatens to not involve themselves again in such ventures because of whatever problems or inconveniences were encountered. But these rumors generally go by the wayside, and life goes on normally.

The DC Chapter trip bunch usually has an annual fall color trip planned, such as the one to Thurmont, or one over the B&O Washington Branch, Old Main Line, to Harper's Ferry, and back to DC via the Metropolitan Branch. Chapter trips are usually planned on the basis of potential response to anticipated demand. And to answer your earlier question, no, you do not have to be a member of the DCNRHS to go on these excursions, although members do receive discounted tickets. Your best bet is to check the web page for the DC Chapter periodically, at http://www.dcnrhs.org to see what trips they have planned.
Wade Rice
Member, B&O RR Historical Society
http://www.borhs.org
Daniel Willard (1860-1942) and Jervis Langdon, Jr. (1905-2004) - Two of B&O's best presidents and managers!
President Leonor Loree (1858-1940) brought the B&O into the 20th century!

One tidbit I know, is the last station agent at Thurmont worked that office for about 20 years. The WM tore the station down within months of his retirement. The station was also the junction with the H&F electric railway -- there is a relatively famous photo of a WM BL2 meeting a H&F motor that sometimes appears in the WMRHS calendars.

For those railfanning the line up to Blue Ridge Summit, a visit to Mainline Hobby Supply is a must.

Username
sjl
Posts
100
Joined
Wed Mar 24, 2004 12:45 pm
Location
mechanicsburg, pa
by jhdeasy
Sat Jan 08, 2005 11:12 pm
During the period 1987 through 1996, I leased track space from MMID to store my private car ST REGIS RIVER in their yard at Union Bridge MD. MMID operated their own passenger excursion trains until around 1990, when they sold the rights to all passenger service on the line to The EnterTrainment Line. At least twice a year, I would pay them to haul my car on the passenger excursion train from Union Bridge to Blue Ridge Summit / Highfield and return. I always did a fall foliage trip; I tried to do one or two other trips each year. I got as far east as Emory Grove with the car, but never got ST REGIS RIVER on the MMID's Taneytown - Walkersville line.

I especially liked the climb of the 1.9% grade from Thurmont to Blue Ridge Summit. I can remember one year we had three MMID Geeps on the head end pulling 13 cars up the Catoctin Mountains. ST REGIS RIVER was right behind the power on the trip up the mountains ... you could stand in the vestibule and really hear the engines working to haul 13 passenger cars up the grade. I always liked crossing the two trestles not too far northwest of Thurmont, the open plateau with the siding (or remains of one) about halfway up the mountain, the horeseshoe curve at Sabillasville and the former WM station at Blue Ridge Summit which was now the local library. In Professor Potter's biography of Fleet Admiral William F. "Bull" Halsey USN, there is a mention of a young Halsey riding the WM passenger train to visit a friend or relative in Blue Ridge Summit.

I made that trip many other times in business car CATOCTIN, or either working on the excursion train or riding it as a guest. If not riding in my own car, my favorite alternatives were on the open platform of CATOCTIN, in the dome of the former UP/AutoTrain dome diner, in the EnterTrainment Line's open air sightseer lounge car (converted from the fire damaged dining car section of a C&O twin unit diner), or from the open dutch door of any car. Pleasing scenery and a well maintained railroad.

Regular passenger excursions on MMID ended in about 1994 or 1995 when The EnterTrainment Line ceased operations. Their equipment was sold at auction and dispersed across the country. Not long after that, MMID gave notice that they intended to terminate my storage lease, so I moved ST REGIS RIVER to a new home. I have not been back to the MMID since that time, but I have many pleasant memories of those years, thanks to MMID General Manager Alan Novotny and EnterTrainment Line CEO Gus Novotny (no - they are not related).

Here is my photo of MMID dome diner 58 crossing one of the two trestles on the east slope of the Catoctin Mountains between Thurmont and Sabillasville around 1990. 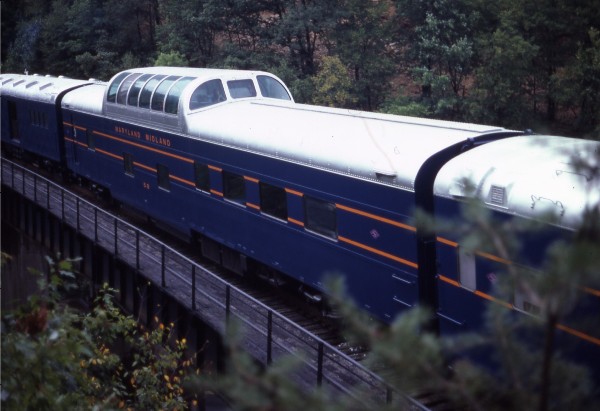 sjl wrote:wow..... i assume the St Regis is currently safe and sound somewhere?

YES -- I sold ST REGIS RIVER to the New York & Greenwood Lake Railway in 1999 ... it has been renamed CHESTNUT HILL, painted in a variation of Erie colors, improved/modified in various ways and serves as the business car of their President (Jim Wilson).