The Color of Smoke

The Color of Smoke

by Lawrence Crossing
Sat Aug 13, 2011 10:10 pm
My imperfect memory recalls a comment made by my late PRR engineer grandfather about steamer smoke. Some time in the 60s, we were watching a Black River and Western engine pulling away in Flemington, NJ, emitting great clouds of black smoke, and he said that he would have been fined by the company for that. According to him (or my memory) they were required to start smoothly enough to keep the smoke relatively clean. I have seen so much dense, black smoke around steamers that I wonder if this was really a concern or a misunderstanding on my part. Was there such a policy, was the smoke "controllable"?

by ExCon90
Mon Aug 15, 2011 3:11 pm
I don't recall the details, but apparently black smoke was a sign of incomplete combustion, and there were various adjustments under the control of the fireman which would result in a lighter-colored smoke, indicating that more of the coal was being burned and less going up the stack. I have heard of a stack emitting white smoke being referred to as a "company stack," meaning that the engine was getting better mileage from the coal, thus keeping costs down. There was at least one class of locomotives (I believe on the Frisco, or possibly the NKP Berkshires?) that had a light mounted at the rear of the stack, just below the top, so that at night the fireman could switch it on to check the color of the smoke. I know there were plenty of incidents of black smoke; I'm sure the quality of the coal had a lot to do with it as well.

by Lawrence Crossing
Mon Aug 15, 2011 3:43 pm
Thanks for the clarification ExCon90. I assumed that it was considered anti-social to blow a lot of black smoke, but it makes sense that the concern was an economic one.

by scottychaos
Mon Aug 15, 2011 6:33 pm
And there was a lot of variation in coal quality, which would also effect the amount, and color of smoke..
the anthracite coal of Pennsylvania was said to be very "clean burning"..
several railroads touted the cleanliness of their anthracite coal: 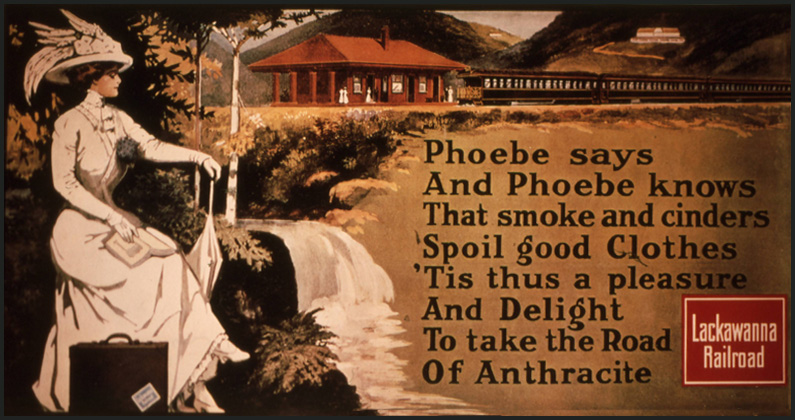 by ExNYC63
Tue Aug 16, 2011 10:16 pm
On railroads with oil burning steam locomotives it was common to
place a light ahead of the smokestack so that the fireman could
check the smoke and therefore adjust the atomizer accordingly.
This was not done on coal burning locomotives.

by ex Budd man
Wed Aug 17, 2011 8:15 pm
Today most of the black smoke is done for foamers who want pictures of 'how steam used to look'. Engine crews took great pains to have a clean stack, and anti-smoke regulations and laws forced the issue. When first starting incomplete burning could cause dark smoke until the draft was stronger bringing in more air to the fire box. The fireman would clean out the flues by feeding sand into the fire box. As it was drawn through the tubes it would remove soot build-up and allow greater heat transfer to the water in the boiler since the soot coated the tubes.
Many devices were used to clean up the combustion process with mixed results. Check the steam forum for more info.

Bob
"I may not have a brain, but I have an idea!" BOB, benzoate ostylezene bicarbonate.

by ExNYC63
Wed Aug 17, 2011 9:22 pm
Sanding the flues was only done on oil burning steam locomotives. This was not
necessary on coal burning locos as coal was a natural abrasive.

by Bigt
Sat Sep 24, 2011 2:26 pm
Yes, the company would send out some management type with the dreaded Ringleman Smoke Gauge.
This was nothing more than a piece of cardboard type material, about the size of an index card, with a
horizontal slot going thru the middle. Along the slot would be a graduated colored scale - white up thru
black. He would monitor the job for a period of time, holding the gauge up to the sky with the smoke
appearing thru a slit in the gauge. Match the color, and, hopefully the job would not be offending.
Just imagine, something simple and it got the job done for years and years. No computers!

by Eliphaz
Sat Sep 24, 2011 5:33 pm
The Ringlemann chart is still codified in law in many places. In Massachusetts for example,
"The Chart shall mean the Ringelmann Scale for grading the density of smoke, as published by the
United States Bureau of Mines and as referred to in the Bureau of Mines Information Circular
No. 8333"
and
"310 CMR 7.06: U
Visible Emissions
(1) U Stationary Sources Other than Incinerators.
(a) Smoke. No person shall cause, suffer, allow, or permit the emission of smoke which has
a shade, density, or appearance equal to or greater than No. 1 of the Chart for a period, or
aggregate period of time in excess of six minutes during any one hour, provided that at no
time during the said six minutes shall the shade, density, or appearance be equal to or greater
than No. 2 of the Chart."

note, emissions from steam powered railroad locomotives are not specifically regulated by 310CMR.

by Lawrence Crossing
Sat Sep 24, 2011 5:54 pm
Very glad to know that my memory of my grandfather's comment was true. I have enjoyed reading the explanations.