by Adams_Umass_Boston
Wed Oct 29, 2014 8:36 pm
With the Downeaster adding a stop in Kennabunkport, will there be any chance for Seashore to connect up with it?

I would love to be able to take the train up to Seashore.

It's about 4 miles from the old Kennebunk station to the museum. I'm not sure how profitable it would be for Seashore to provide rides to/from the station, but perhaps they will consider it.
MEC407
Moderator:
Pan Am Railways — Boston & Maine/Maine Central — Delaware & Hudson
Central Maine & Quebec/Montreal, Maine & Atlantic/Bangor & Aroostook
Providence & Worcester — New England — GE Locomotives

Adams_Umass_Boston wrote:With the Downeaster adding a stop in Kennabunkport, will there be any chance for Seashore to connect up with it?

It might be possible to get the "trolley" service mentioned in that article to stop at the museum. As for using the museum's own operators and equipment, I doubt it. We have very few qualified bus operators, and they're usually busy with other tasks when they're at the museum. I also don't know if any of our operating buses are in suitable condition for carrying passengers off of museum property.
"The destination of this train is [BEEP BEEP]" -announcement on an Ashmont train.

by Mr rt
Fri Nov 14, 2014 7:37 am
The problem with picking folks up at a Amtrak RxR station is the cost of the insurance for the bus.
For a few people, a few times a year it just doesn't pay.
When the buses due go off-site at Seashore it is a members only trip, i.e. the insurance on the bus is for non-commercial use & it is usually a individual who has taken out the insurance vs. the museum.
In addition these buses are "artifacts", so you wouldn't want to be using them up on frequent trips to/from a RxR station.

However, both buses are privately owned, but it cost nothing to ride those buses.

Also, when I visited in 2012, I saw both the Newark PCC and TTC 2890 in the maintenance barn. Since then, have either car operated in service at Seashore?

I am thinking that the next Peter Witt type car that might be used in passenger service will be Cleveland's center entrance #1227.
The quality of the ride is more dependent on the travel path as opposed to the kind of vehicle or the kind of energy propelling it.


Adams_Umass_Boston wrote:With the Downeaster adding a stop in Kennabunkport, will there be any chance for Seashore to connect up with it?

The Downeaster is adding a stop in Kennebunk, not Kennebunkport. The only rails in Kennebunkport are Seashore's, and then just barely. In the B&M days, crews used to make unscheduled stops at Log Cabin Rd. in Arundel for Seashore people. That is no longer possible, though the crossing is less than 1/2 mile from the Museum. The Downeaster stop will be at the traditional Kennebunk Station off Summer St. This is about five miles from the Museum.

The comments regarding Seashore running connecting buses are fairly accurate, but Seashore's bus person is distracted by other museum projects, leaving no opportunity for any off-property bus operation last year or this year.


Disney Guy wrote:No, the Newark PCC and Toronto #2890 have not run in passenger service. It's been several year (I forget exactly how many) since any PCC ran for Seashore's guests. The last PCC used was Philadelphia's #2709.

I am thinking that the next Peter Witt type car that might be used in passenger service will be Cleveland's center entrance #1227.

Washington 1304 has run and carried a few passengers over the past three years. It currently has a problem with MG fuses blowing.

2709 appears to have taken a lightning hit, which took out the M armature of the MG. The lightning arrestor may require attention also.

The Newark PCC has never run at Seashore. It has been receiving cosmetic work, funded by a member. Whether it can ever run will be determined when we can put it on the pit and inspect the electrical gear. Evidence indicates that the car got flooded at some point in its history, If this damage was repaired, the equipment might be in very good shape, otherwise the car will be a static display.

2890, on the other hand, did run a short distance on temporary Toronto gauge rail, before being placed on shop trucks so the originals could be regauged. That work is almost complete, and required steelwork on the body is also about done. The present goal is to retruck the car and make it operational next year. Although classified as a "Small" Witt, it has substantial seating capacity, and good ventilation.

Cleveland 1227 is not a Peter Witt type car. It is a center-entrance car, although Cleveland operated Peter Witt cars of similar design. I spent several days, a week ago, working on a couple of electrical and braking problems in the car. The former was a product of mislabeled wires, while the latter was caused by a very dirty Emergency Valve.

For those who do not know: The Peter Witt patent covered a front-entrance center-exit layout, where fares were collected at the center door. It was the most efficient variety of two-man car, and easily converted to one-man operation. The design is the ancestor of most modern buses and trolley buses, along with most single-end PCC cars and the Kawasaki city LRVs in Philadelphia and CLRVs in Toronto. 2709 was delivered as a true Peter Witt, as it had a conductor's booth in the center.
Gerry. STM/BSRA 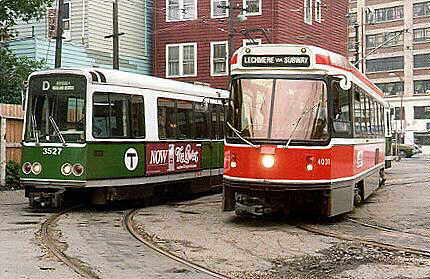 by NaugyRR
Tue Apr 19, 2016 8:52 am
Aren't the TTC cars broad-gauge? Did they need to be re-gauged when leased?
"That sapling that once grew just south of Wassaic may be long gone, and the Harlem Line’s appearance may have changed over the years, but for decades to come, I can count on it continuing to provide me with funny recollections" 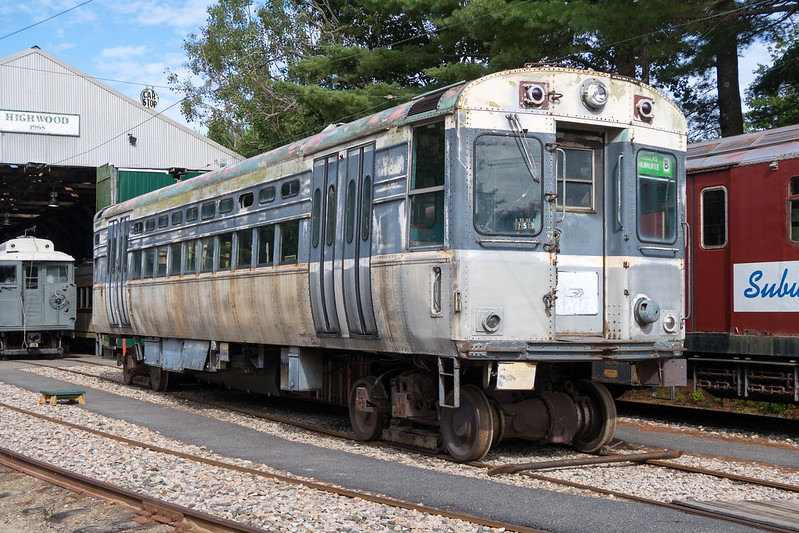