by NYC_Dave
Mon Sep 02, 2013 9:09 pm
The attached photo of the Grand Rapids, MI depot shows an open end passenger with a "railing" on the roof. Note there is an end ladder also. Does anyone have any information about such a car? The photo was posted on the Michigan Railroad History website http://members4.boardhost.com/RRHXHisto ... 48929.html where there are more recent photos of the depot site and some discussion. 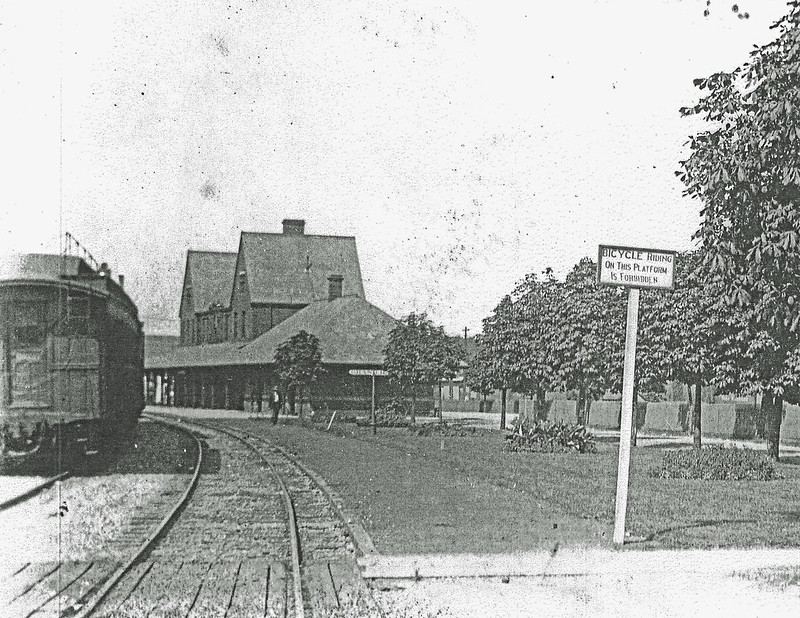 If it were from the late 1940s and on the PRR, my immediate reaction to the "railing" would be "inductive train-phone antenna." But this looks earlier to me, and on the NYC.

I hope someonecancome up with more information: it's intriguing!

by NKP1155
Tue Sep 03, 2013 8:44 am
This photo shows the coach in question having a full face knuckle, this would imply the picture was made after, or very near the end, of the link & pin era. When the Janey coupler was adopted, knuckles were cast with slots in the face to accommodate links (thus rendering them more likely to break and be considered a reason to go back to the link & pin and hiring brakeman who were "careful" in their work). So, I'd date the picture as sometime after 1905.
The shadow the coach casts shows a walkway running the entire length of the car. Assuming the rail lengths were @ 30', the shadow of the coach seems to imply a length of 50' to 60'. While we cannot see the entire car end, it appears that a marker light is built into the car end and walkway If that is the case, it would have be serviced from inside the car using a set of colored glass pieces to comply with rule book instructions for rear end designation This would have been similar to the system used on several other railroads cupolas. So, I'd place this coach in the role of a mixed or local freight status. The interior likely having bunks and the other items needed to feed and house the train crew.
In 1905, the Grand Rapids line scheduled 2 passenger trains a day in each direction. One of these took @ 3.5 hours to cover the 95 mile long line, the other over 4 hours. The slower train, a daily except Sunday run, may have been mixed, though, the Guide does not indicate it as such. It is more likely it did the mail and express work.
So what I think we are looking at is a local freight, not shown in the Guide, with a coach/caboose used to accommodate LCL and occasional passengers. Public riders being such as traveling salesman or drovers or others who needed to ride with their shipments. The roofwalk was there to allow a brakeman to move over the train to get to and from his work in making up his train or performing switching enroute. Hope this helps others to fine tune what is shown.

by BR&P
Tue Sep 03, 2013 1:28 pm
I agree with NKP1155 - the photo appears too early for any type of communication installation, and the ladder suggests the car has roof access for trainmen. Maybe a close look at other LS&MS pics will show such a car in the background at a better angle than this one.