by 452 Card
Fri Jan 03, 2020 3:58 pm
Looks like it has become a standing parts warehouse on #3 track. Shoe beams gone, intake grid cover gone, etc. Tape over the R/S cab door seems to be a deterrent for souvenir hunters. Still has the horns.
Wheelslip! Back to the Barn.
MOTEL

by Backshophoss
Sun Jan 05, 2020 10:59 pm
If the energy "cap" along with the main Alternator are damaged/shorted out,511 is now a'parts supply" only.
It wiil rust in place/peace.
The Land of Enchantment is not Flyover country!

by Backshophoss
Mon Jan 06, 2020 10:55 pm
Both the DM's and DE's no lomger supported by EMD/CAT,parts no longer made or exist, so any major failure will sideline the loco.
511 is now a parts bin,507 was a patched together loco parts wise,if the prime mover,main alternator,or the energy "cap" fail
507 is done and joins 511 on the deadline as a parts bin.
The Land of Enchantment is not Flyover country!

by M1 9147
Sat Jan 18, 2020 11:16 pm
511 was involved in the Speonk derailment last year on Memorial Day weekend grounding it with substantial damage. I guess now if there was indeed engine damage and no parts could be supplied, then it’s a no go.
Neil Feldman 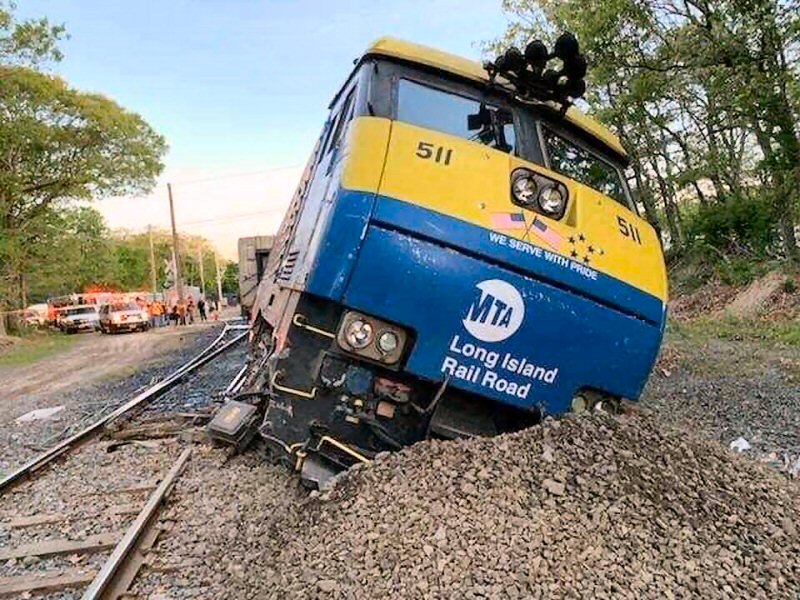 3:16am Cannonball engine #511 sideswiped a LIRR MOW train, with a large fuel spill and derailment of both trains, during a passing maneuver.

The unofficial story is: the Cannonball and the eastbound were to perform a see-saw move at the Speonk passing siding. The Cannonball was 14 units long, the siding holds 13. After its Speonk stop, the Eastbound was given a highball signal and moved out catching the trailing locomotive of the Cannonball. Claims of new technology failures are being reported, (i.e. the new computerized signal system screwed up with the wrong aspect.)

The engineer of the Cannonball, not realizing his trailing unit was on the ground took HIS highball and dragged the sideways loco close to half a mile west, fouling the grade crossing before losing an air hose and going into emergency. Initial estimates of over one million dollars damage have been overheard!
Steve Lynch
Long Island Rail Road :: Trains Are Fun

by ConstanceR46
Mon Jan 20, 2020 12:08 am
Because in like 5 years we'll be getting dual-mode chargers. The DE/DMs are an orphan fleet, i believe, and one where there's more than enough engines. - it's not worth it to fix 511 when the replacements are being drafted as we speak... In addition, this requires $$$ - altoona doesn't fix trains out of the goodness of their hearts.

Altoona no longer overhauls other railroads engines. That is done and over with. They cut down on shop forces, only focus on rebuilding NS engines.
Besides the 159 rebuild was not a full overhaul, instead using the “nickel and dime” approach. Probably made it not worth it for NS in the first place.
155 is kind of stuck there till NS finishes its restructuring. Who knows maybe it will come back in 3000 black trash bags full of parts, to be reassembled somewhere else!

by ConstanceR46
Tue Jan 21, 2020 4:34 am
- RGlueck: Not yet, but that's another thread in itself. A proposed design is rumored (and this should be taken with the motherlode of salt) to be a bi-mode Siemens Charger.

by Teutobergerwald
Tue Jan 21, 2020 7:43 pm
Cuomo will meddle, thus making everything more complicated and expensive.
Searching for the eagles of the XVII,XVIII & XIX Legions in Germania.