Were there deluxe accommodations (other than the normal 10/6 or occasional Cpt/DR)?

What were the 'selling points' for the GS Ltd, other than different intermediate cities served?

by eddiebear
Fri Apr 09, 2004 8:08 am
The Golden State had about a 45 hour time according to my Oct '61 Guide which I have in the office just to answer questions like this. It may have been a bit faster earlier but this was 5-6 hrs slower than the Super Chief and City of LA. All these 3 trains had Extra Fares at one time and the Super and GS still did in '61. The City of LA had a seat reservation charge only at this time.
The GS was heavy on Double Bedroom, Compartment and Drawing Room space as it served one of the two big retiree havens and probably the one with very well off people....Arizona. Roomettes were also available.
Some of the GS Route advantages that were touted were:

1) Serves both Tucson and Phoenix on a mainline (not just a branch to Phoenix like ATSF).
2) Lowest crossing of Continental Divide especially tempting to people with asthma and other respiratory problems who were seeking the sun and dry air of Arizona.
3) When the schedule was good with a late morning or early p m arrival in Chicago, the advantage of making close, across the platform connections at Englewood U. S. with premier Eastern trains was advertised. These premier trains were 20th Century, Commodore Vanderbilt, Broadway Ltd., General and others heading for the Rust Belt and rest of the great Northeast. This obviated the need for going into LaSalle Street and then going out again if the routing was CRIP-NYC or NKP and a complete station change if the routing was CRIP-PRR. A comfort for the type of people who were likely to ride the GS ...us older folk.
4) The GS also split off a sleeper and sometimes a coach at Kansas City for the Twin Cities a smaller enclave of folks who might seek the warmth of Arizona or who might actually go all the way to LA LA LAND.

Username
eddiebear
by route_rock
Sat May 01, 2004 8:14 am
I have a video of local TV anchorman here in the Quads talking about the Golden State when the Rock was shutting down.The most amusing part was how they talked about you could get a shave and a haircut on the Golden State but you wouldnt want to do that now with the condition of the track!One of the old head trainmasters also said that when the GS came through small towns out on the Il Div. people would come out and wave like mad cause you could tell just by the feel of the vibration that it was THE Golden State and not just some other train.

GOLDEN TOWER from The Golden State

by jhdeasy
Thu Jul 15, 2004 3:01 pm
One of Rock Island's Golden State sleeping cars, GOLDEN TOWER, which was built by Pullman Standard in 1954, has been totally refurbished and converted to a cafe-lounge by Lancaster & Chester Railway. It is one of two cars in L&C's executive train; it is available for mainline charter.

Username
jhdeasy
Posts
2236
Joined
Fri Mar 19, 2004 1:16 pm
Location
Mount Vernon, Virginia, USA
by PRRGuy
Thu Dec 16, 2004 8:52 am
Hi. Recently I bought a pillow off of ebay that was used on the Rock Island. On Both sides it's stamped " Golden State" and one side in much darker ink " Rock Island Coach Service" Question: What kind of sleepers did the golden state have when in operation. 2: Any idea what something like this would be worth?...jw Thanks.
http://nictd1000.rrpicturearchives.net

by eddiebear
Thu Dec 16, 2004 1:42 pm
In the streamlined era, I believe the GS featured sleeping car types in these configurations: Roomette/ Dble. Bedroom, Dble. Bedroom/Compartment/Drawing Room, and a Dble. Bedroom/Lounge. I think the Twin Cities car, on/off at Kansas City was a Section/Dble. Bedroom/Roomette car. Around 1960 or so RI quit using Pullman as its sleeper operator and began operating its own sleeping cars save for the GS Route through cars which continued to be Pullman operated.

Username
bill haithcoat
by atlpete
Thu Jan 19, 2006 8:49 pm
Correct, the Rock Island never ran domes on the GS (or even owned any for that matter.) SP didn't run domes on it either nor the Sunset. Perhaps because of their more southerly and comparatively less scenic desert routes? frugal management? who knows? The 70's era Peoria/Quad Cities Rocket remnants ran a leased PS C&O-style dome that belonged to a tour company but I think that's pretty much the extent of RI's dome operations. While not quite the equal of the Chief, the Golden State at it's height was no slouch luxury-wise with accomodations that would qualify today as a luxury land cruise operation. For a detailed account of its operations and equipment I recommend Greg Stout's Route of the Rockets, a must for any fan of RI and/or passenger trains- superbly detailed with loads of photos and car roster info. The late and sadly missed Passenger Train Journal ran a color article on the GS sometime back in the eighties worth looking up in the used stacks as well. What a great train, extra-fare to the end and discontinued around '68(?)before being fully downgraded to the "trailways on rails" level of the remainder of the rocket fleet. 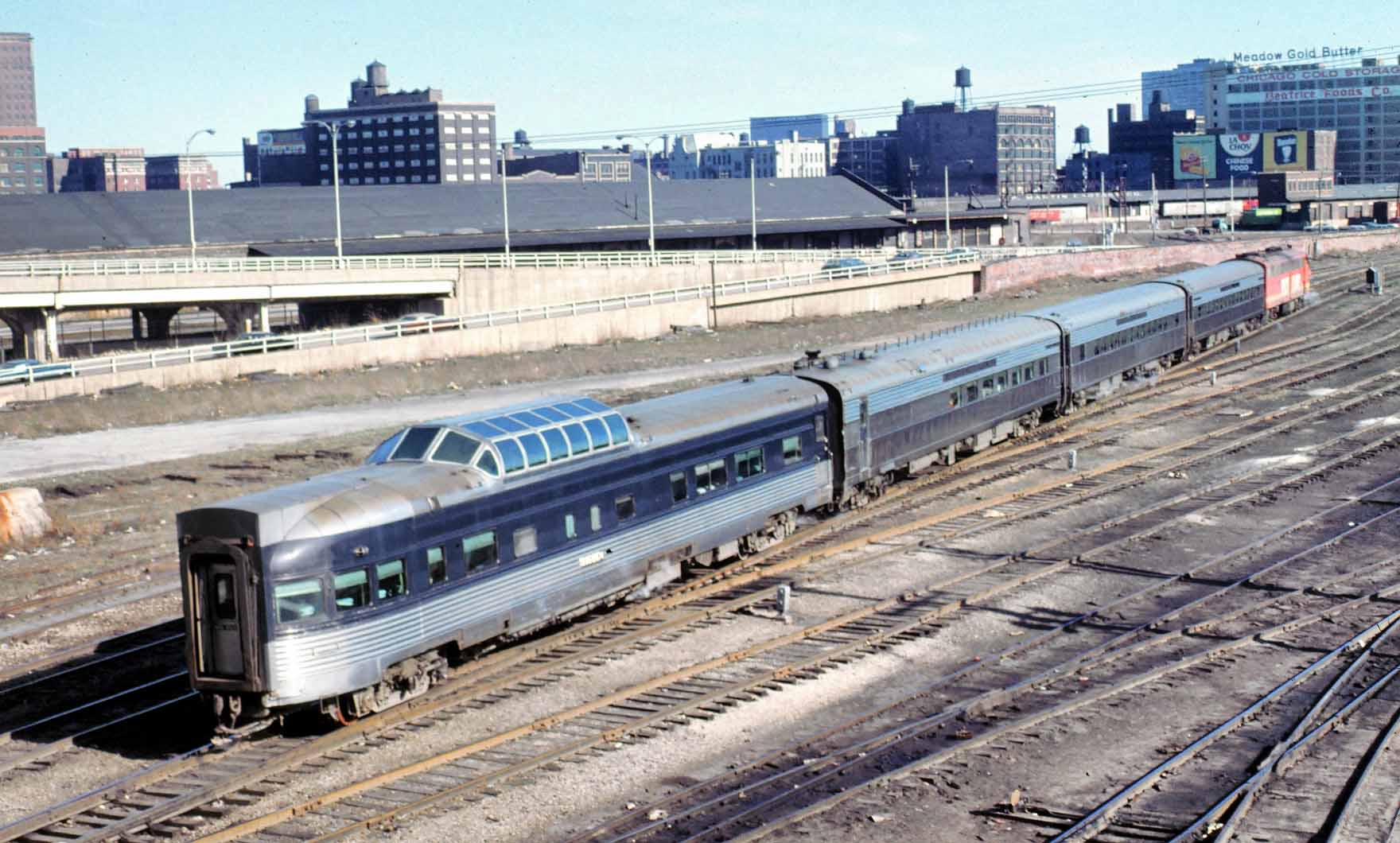 Butterworth Tours' dome parlor car BIG BEN was built by Budd (not Pullman Standard) in 1948 for intended assignment to the C&O "Chessie" streamliner.

Luis Caceres and I inspected the car at Clifton Forge VA, about 5 years ago, for the C&O Technical and Historical Society, to assist them in setting a sales price for the car.

Username
jhdeasy
Posts
2236
Joined
Fri Mar 19, 2004 1:16 pm
Location
Mount Vernon, Virginia, USA
by Tadman
Sun May 13, 2007 5:49 pm
In the picture above, aren't most of those chair-cars from the Golden State stock originally? When RI axed most of the passenger trains, the nicest coaches left were GS stock, and those went to the only remaining trains.
Dig the new rr.net Instagram account: @railroad_dot_net

Re: Golden State Ltd. and other passenger trains

Even by then, Golden State had lost any "touch of class". I guess one interesting car in the consist was an all-passengers Lounge that RI bought from the NYC that wasnpsrt of The Century until the '58 "Pearlman downgrade".

I remember seeing its final "ghost of itself" during '66. By then it had piggyback TOFC on the rear and could aptly been named the "Golden Freight".

It was gone before A-Day.