Today I was at Union Station in Worcester and noticed there's a very old platform on the west side of the station that still exits. Any idea when this was last used regularly and what trains it served? Where does the line head north of there?

by The EGE
Sat Sep 25, 2021 12:51 am
The original 1875 Union Station was built to serve 5 lines, which had 4 separate stations. (The Worcester and Shrewsbury Railroad, a narrow gauge line, used a separate terminal nearby until it was converted to a trolley line around 1900.) The 1911 Union Station, located slightly west, eliminated most grade crossings and improved freight interchange.

The east-west tracks (Boston and Albany Railroad) had a side platform plus an island platform. (The island served the 2nd and 3rd tracks south of the station; the new island in planning will be slightly north and serve the 1st and 2nd tracks).

There were 5 tracks on the northwestern side of the station, with two islands and a side. The three western stub tracks were through tracks; they connected the B&M lines to the north (the Boston, Barre, and Gardner to Gardner, and the Worcester, Nashua, and Rochester to Ayer) with the New Haven lines (the Providence & Worcester and the Norwich & Worcester), which crossed under the B&A west of the station. The two eastern tracks were stub tracks for the New Haven lines. Two of the through tracks still exist; the stub tracks and the westernmost through track are gone.

The first service to be discontinued was to New London on the N&W in 1946; it had been only used for Maine expresses for a while. Local service resumed in 1952 with a single RDC. Local service to Gardner and Ayer ended in 1953, followed by Providence around 1957. The State of Maine ran via Providence, Worcester, and Ayer until 1960. New London service lasted until A-Day (May 1, 1971). 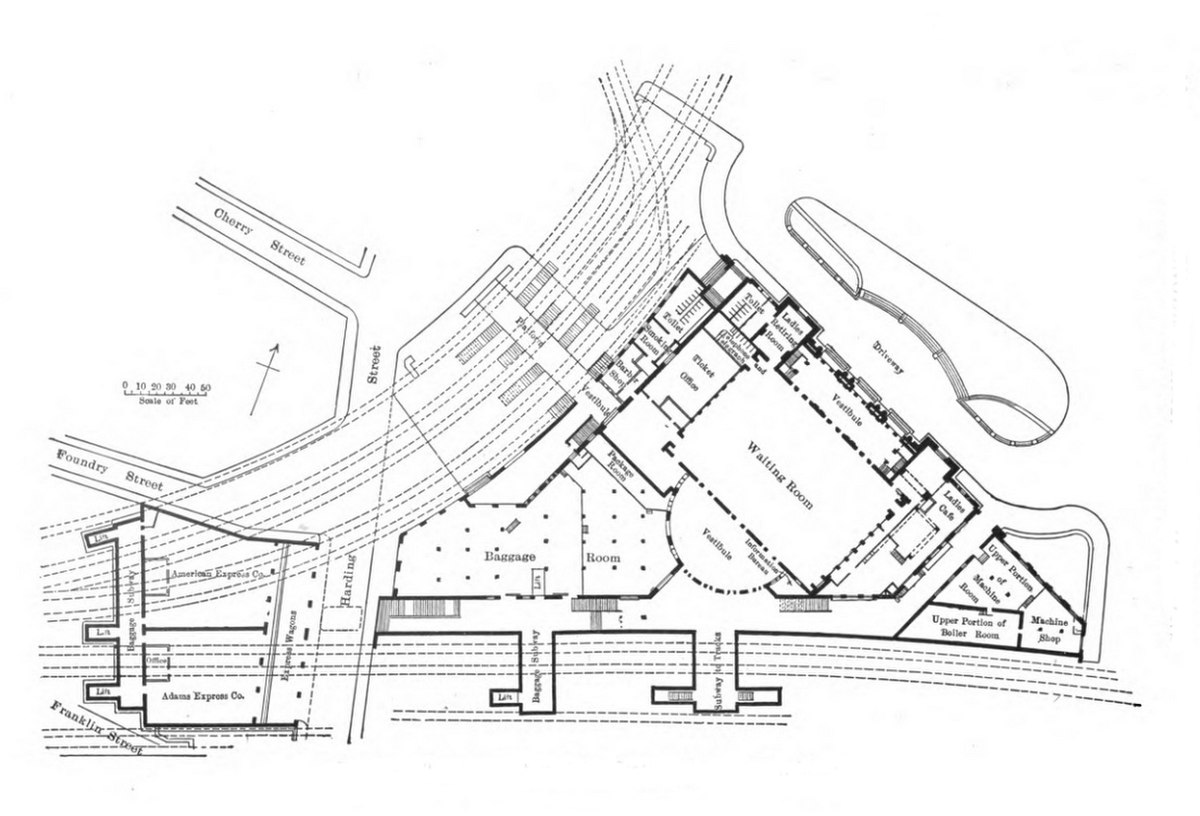 by BandA
Sat Sep 25, 2021 1:14 am
The skeleton of a canopy on that side is fascinating. Worcester was a union station, with Boston & Albany (NYC) trains running East-West, and B&M trains running North-South and/or New Haven trains running North-South. To the north you get to Barbers' Crossing area where Saint Gobain plant is (formerly Norton Abrasives), then to Holden. To the southwest you are going towards Norwich or New Haven. To the southeast you are going towards Providence.

According to Wikipedia, the long-distance trains State of Maine and Bar Harbor Express (seasonal) came off in 1960, which is when all B&M passenger service other than Boston commuter trains ended. From the b&m historical society chronology of passenger service, Wor-Peterboro ended on 3/7/53, Wor-Ayer-Lowell (Stony Brook Branch) ended by 4/26/53. As-of 1956 the B&M was trying to figure out how to get out of paying for station maintenance costs. State of Maine ends 10/29/60, replaced by Wor-Haverhill RDC from 10/30/60 to 12/30/60.

by jaymac
Sat Sep 25, 2021 8:07 am
For those who haven't read the NHRHTA's Shoreliner, volume 40, issue 3, the last day of NH passenger service to New London out of Worcester Union Station was Saturday, Oct. 24, 1964, per p.35. After that, service ran out of the NH freight house at 43 Madison Street.
Volume 40, issue 4 provides additional detail about both Union Station and Worcester railroading, and both issues are excellent acquisitions.
"A gray crossover is definitely not company transportation."

by Rbts Stn
Thu Sep 30, 2021 7:08 am
We were sitting in Polar Park on Saturday and wondering at those two domes in front of us. Took me about 3 minutes to google "two domes Worcester" to realize that was the famous Worcester Union Station. As if the trains going past/over the left field wall shouldn't have been clue enough

by Commuterrail1050
Mon Oct 18, 2021 9:05 am
Are they still building the second platform at Worcester? Haven’t heard any updates from that project in a while.

by Trinnau
Mon Oct 18, 2021 5:56 pm
Bids for the construction contract were just opened less than 2 weeks ago, with the "apparent" winner just under $45M.

You can see the bids here on the Capital Delivery portion of the MBTA's website.

by BandA
Tue Oct 19, 2021 12:03 am
OBRASCÓN HUARTE LAIN, S.A. (“OHLA” or the “Company”) appears to be the Spanish parent company. The US division seems to be based in NY. The head of Judlau & OHLA America is originally from India, worked for the MTA in NY for 23 years, has Mechanical Engineering & construction background. https://ohla-group.com/en/home/