1) a 30 year old "New Wye" isn't hard to understand when you think in railroad terms ... railroads have long memories, and are resistant to change. It was called the "New" wye 30 years ago, and still is today. Why? because it wasn't built in the 1880s. Until another wye is built, it will probably always be "New Wye".

2) lines/tracks/spurs/etc are usually named for the function/industry they're built for, or serve. If the industry changes names, or goes away, etc ... the railroad is not likely to change the name. Reason is simple : you have to change the timetable, and force all the employees (dispathcers, road crew, etc) to change names. It's far easier and cheaper to just keep using the same name.

by MattW
Mon Oct 20, 2014 6:42 pm
There's a control-point on CSX here in Atlanta somewhere between Howell Junction and Tilford Yard that is called "Top of Slide." I think it's referring to an approach to either the hump or a downhill to Howell.

by BR&P
Thu Oct 30, 2014 7:37 pm
Finger Lakes Ry in Auburn NY has the "Beer Track". And Ware MA, on the Mass Central, has "The Avenue". NYC in Rochester used to have the "Old Way", a branch about 3/4ths of a mile long which used to be the old way into Eastman Kodak before that plant expanded long ago. In Goodman Streel Yard in Rochester NYC had the "Old Hole".

by Engineer Spike
Sun Jun 07, 2015 1:41 pm
In CP's computer system, it uses codes for track inventory. R for Rouses Point, W for Whitehall, and S for Saratoga, etc. In Saratoga, all the track code names had an S before them. On the switch lists, the caboose track was SCAB, so we called it the scab track, especially if there was someone around who scabbed the big strike in 1986, under Guilford.

The computer also had a lost track. This is where a yardmaster could place the car in the computer, if he didn't physically know where it was. He'd then ask the yard crew to keep an eye out for a missing car. We had a dopey trainmaster who was roaming the yard, asking everyone where the lost track was. They kept telling her to ask the next guy, as he might know.

BR&P wrote:Finger Lakes Ry in Auburn NY has the "Beer Track". And Ware MA, on the Mass Central, has "The Avenue". NYC in Rochester used to have the "Old Way", a branch about 3/4ths of a mile long which used to be the old way into Eastman Kodak before that plant expanded long ago. In Goodman Streel Yard in Rochester NYC had the "Old Hole".


The Beer Track is where the little block transfer building is in the yard on Columbus St. With Cayuga CO-OP now out of business and the beer shipments having ended the siding and transfer building are now being used to off load empty wax cardboard ice cream containers from what I had heard?? Supposedly they are trucked from Auburn to a plant in Fulton but have never been able to confirm that??
no matter the weather or the country I'll still be trackside!

The Reading regularly referred to short passing or storage tracks as "layoff" tracks. There was a "Chelten Hills Layoff" just south of Jenkintown, to the west of the eastbound (inbound) main track, for instance.
"Am Gleis drei bitte einsteigen - Türen schliessen selbsttätig. Vorsicht bei der Abfahrt!"

by nyandw
Thu Sep 03, 2015 8:57 pm
Ringhouse track (siding) was the main siding south of the tracks in the old Patchogue yard, NY, named after a retired LIRR conductor who started his service with the South Side Rail Road (1860-1879) 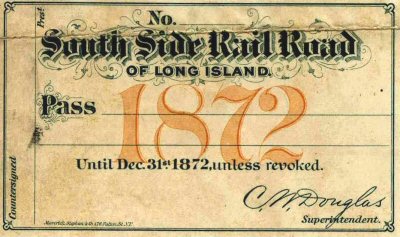