All 13 carriages of the train, which was travelling from Madrid to Ferrol, came off the tracks near the city of Santiago de Compostela.

Images from the scene showed bodies strewn near ruined carriages, and emergency crews searching the wreckage. 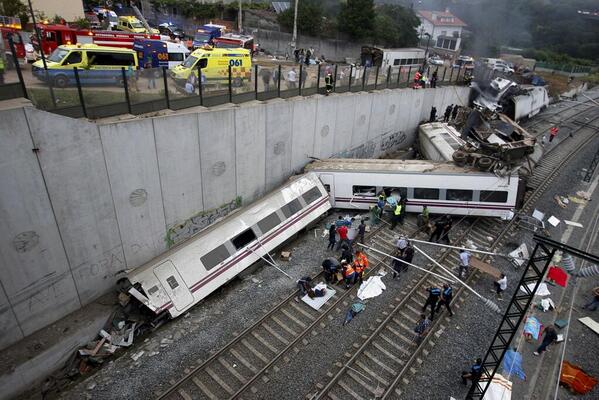 by 25Hz
Wed Jul 24, 2013 5:29 pm
I'm very concerned that 2 people I know could have been aboard that train. Still no word. Stomach in knots worried about them. I'm actually on a train myself right now, so that's not helping.
Next stop the square, journal square station next!

by jstolberg
Wed Jul 24, 2013 5:34 pm
The BBC says at least 35 killed among 218 passengers on 13 carriages. The Guardian puts the passenger total at 240. http://www.guardian.co.uk/world/2013/ju ... CMP=twt_gu" onclick="window.open(this.href);return false;
It appears that not only did the train derail, it also hit a concrete retaining wall. Its never good when that happens. My prayers go out for the families of the passengers killed and injured. No doubt many of them came from Galicia. The train size is about the same as the current Cascades trains in the US with what looks like tilting Talgo equipment. High temperature in Santiago de Compostela Wednesday was 75 degrees Fahrenheit, so heat was not a factor. The curve is quite tight, so speed might be. Structural engineers will want to look at the wreckage.


From the first hand accounts it seems to me it may have been going too fast entering the curve.
Next stop the square, journal square station next!


Investigators are looking at excess speed on a tight curve as a possible cause of Wednesday's train derailment that killed at least 77 and injured 140 in Spain's worst train tragedy in some four decades, government officials said.

by lpetrich
Thu Jul 25, 2013 7:09 am
Santiago de Compostela train disaster: the crash site | World news | guardian.co.uk - has some maps. The train was coming off of a new high-speed line into a old and rather curvy line.

The track had been adapted for the AVE high-speed trains, but the signaling system had not. An engineer from the Adif state rail infrastructure company, who admitted he was unaware of the exact circumstances of the accident, explained on Wednesday that it would be very difficult for a train to derail simply due to excess speed, and that another factor – involving either the track or the train itself – must have come into play.

I have a problem with the Adif engineer's theory. Centrifugal force goes up as (velocity)^2, and twice the speed means four times the force. So it looks to me that the speed could do it.

by mtuandrew
Thu Jul 25, 2013 10:12 am
I hope your friends are alright, 25Hz. Thank you for reporting this tragedy here, and my thoughts go out to the victims and families.

All: let's keep the speculation to a simmer before the Spanish and/or EU authorities come back with a verdict. I'll be very interested to see how the Talgo cars held up for the most part too, since that could influence their use on our side of the Atlantic.
Moderator: General Discussion: Passenger Rail,
DC-MD-VA Passenger Rail and Amtrak

by ThirdRail7
Thu Jul 25, 2013 12:30 pm
Here is a security CCTV video capturing the derailment. It is not for the faint of heart.
I want my road foreman!

by AEM7AC920
Thu Jul 25, 2013 1:16 pm
My thoughts and prayers go out to everyone dealing with this tragedy! The picture where the car went up over the embankment just shows how fast this thing was really moving when it derailed. I'm not going to speculate any further then speed was a major factor here, as a railroader just makes me anxious to know what the engineer was doing/ thinking and why?
AMTRAK HAWK DETECTOR TRACK 1 NOOO DEFECTS OUT!

by RearOfSignal
Thu Jul 25, 2013 3:13 pm
Heard on my local news that the train was estimated doing 118mph and the speed on the track was half that. News stated that the engineer said he was speeding because the train was late. That it just absolutely insane! Engineer should be charged with homicide if that is true.
Hurry up and wait at the signal!

This map shows the curve where the accident occurred. It's where the HSR joins the existing rail corridor, with the HSR tracks exiting a tunnel, but still using the new HSR tracks. There was no points, switches, or turnouts at the crash locale. I don't know what was the specific cause of the accident, but I'm sure an investigation will find out. Having a 50 mph max speed curve immediately upon rejoining an existing slower speed corridor might be too low, considering the train had been going 150 mph just a few kilometers earlier. One would think they would design joining and exiting existing rail corridor points on straights instead of 50 mph sharp curves. One would also think the HSR train would be automatically slowed down without train engineer input at these points as well. Maybe that's the lesson to be learned here?

The speed limit on that section of track is 50mph, and locals said that trains often creep through, as the station is just a short way down the tracks.