The nice thing is, if meeting at a location to run jointly and the DMU is on time and the main train is late, the DMU can continue on the main train’s schedule. Same if reversed.

by Rockingham Racer
Wed Jun 03, 2020 11:44 am
I like the idea of expansion, but let's be realistic: the host railroad[s] need to be involved in any plan for an increase or new service which uses their right-of-way. Mobilizing local leaders and members of Congress seems to be a given as well. Not an impossible task, but not an easy one either, it seems.

by Tadman
Wed Jun 03, 2020 1:11 pm
I'm curious where that list came from. South Bend to Kankakee was pulled up decades ago. Betcha NS wishes Conrail hadn't pulled that trigger. For 20 years Chicago has been so crowded.
Dig the new rr.net Instagram account: @railroad_dot_net

by Pensyfan19
Wed Jun 03, 2020 3:44 pm
It was a long list of proposed routes which I sent to Amtrak (and was quickly rejected for obvious reasons), but I did analyze most of these routes and saw that most of the right of ways for these abandoned lines are either trails or pathways which can easily be reactivated or can be relocated so that it does not disrupt developments along the original right of way. I made the document as a compiled list of nearly every single discontinued passenger train route in the U.S. (accomplished by researching old timetables of every class I at the time) over 130 miles in length, as well as combining a few discontinued routes into one or two different lines.
"Look down, step over, and watch the gap!" - Dr. John Clarke, the Gap Rap, 2010

Amtrak operated their SPV-2000's SPF-WAS in the matter you immediately outlined. Even with their rooftop cooling gear, they had clearance to operate through NYP.

But it sure seemed like a "waste" to me for each one-way trip, to have the capital costs of the propulsion gear used for 62 miles only to be "draged" for another 299.

The through service using the CT SPV-2000 cars was to Philadelphia
and NOT Washington from Springfield with the car placed on the
rear of the connecting train from/to Boston at New Haven.

The main reason was so the folks at the Budd Company could keep
an eye on them with further maintenance at Red Lion if necessary...

I remember another time spotting two of the MTA/MNCR SPV2000 cars
on a Philadelphia-bound train at NYP and was informed upon curiosity
that these cars must have been so bad that they were going back to the
Budd Company to be maintained even with a car shortage (mid 1980s)
on the Harlem and Hudson Lines in diesel territory.

The MTA version of the "Seldom-Propelled Vehicles" was easy to spot
with the blue window stripe - and after they were retired they ended
up in the Croton Harmon boneyard and eventually sold for scrap.
At least the CDOT cars got converted to the "Constitution Liners"
which was a good move...MACTRAXX
EXPRESS TRAIN TO NEW YORK PENN STATION-NO JAMAICA ON THIS TRAIN-PLEASE STAND CLEAR OF THE CLOSING TRAIN DOORS

by west point
Wed Jun 03, 2020 9:28 pm
DMUs at Tampa instead of the Star ? No way. You realize Tampa Star handles more passengers than even Atlanta on the Crescent ?

by Jeff Smith
Thu Jun 04, 2020 7:22 am
WP, did not know that. Just thought it might make sense to prevent the back-tracking the Star does.
Next stop, Willoughby
~el Jefe ("Jeff Smith Rules") :: RAILROAD.NET Site Administrator/Co-Owner

west point wrote: ↑Wed Jun 03, 2020 9:28 pm DMUs at Tampa instead of the Star ? No way. You realize Tampa Star handles more passengers than even Atlanta on the Crescent ?

Perhaps the answer in that case is having a car switch at Lorton where Miami and Tampa sections of the Star combine for the trip north. I suggest Lorton rather than Lakeland as there are plenty of Amtrak personnel on-site that can make connections and troubleshoot equipment. There's a switcher as well.
Dig the new rr.net Instagram account: @railroad_dot_net

by MattW
Thu Jun 04, 2020 8:13 am
How many people does the Star handle south of Tampa? Maybe the option there then is to run the DMU between Tamp and Miami.

MattW wrote: ↑Thu Jun 04, 2020 8:13 am How many people does the Star handle south of Tampa? Maybe the option there then is to run the DMU between Tamp and Miami.

Or to curtail the Star at Tampa and offer seamless booking to Brightline at Orlando, once that option is available. Meteor can still go through.
Moderator: General Discussion: Passenger Rail,
DC-MD-VA Passenger Rail and Amtrak

by Jeff Smith
Thu Jun 04, 2020 8:56 am
I like the idea of terminating at Tampa with a return trip that afternoon, if you restore the Silver Palm from it's Palmetto status terminating at Savannah, and adjust it's schedule so it covers different areas at different times. I'd adjust all the Atlantic Coast Service times, honestly.

But to bring us back on topic, I'd add RDC's at Orlando and Tampa to make connections.
Next stop, Willoughby
~el Jefe ("Jeff Smith Rules") :: RAILROAD.NET Site Administrator/Co-Owner

by Tadman
Thu Jun 04, 2020 9:23 am
What we speak of was once a thing, SAL/SCL ran a doodlebug to quieter points in Florida to meet the Silvers.

Somehow they took something with the shape of an Electroliner or Zephyr and made it about as appealing as a boxcar. 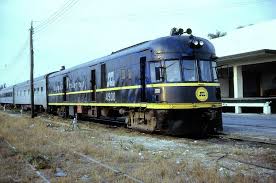