Signs for PC, CNJ, and RDG service at Newark

Thanks for the info
Dock & Q: Last of a dying breed

Tommy Meehan wrote:Btw, at one of the subway stations along Sixth Avenue in Manhattan there is still a sign directing passengers to "Tube Trains." (For many years the old Hudson & Manhattan -- PATH's predecessor -- was referred to as the 'Tubes'. H&M itself even used the term.) In fact, there are a number of places like that where old signs survive. There are even websites that feauture photos of them, though I don't have a link handy, sorry..

They appear at 14 and 23 Street, in the art deco IND tile signs. These are original signs from the IND in 1940.
Since my friend continues to chain smoke nonstop, she is probably an Alco.

R36 Combine Coach wrote:They appear at 14 and 23 Street, in the art deco IND tile signs. These are original signs from the IND in 1940.

Interestingly, the H&M's own signage (before the 6th Ave IND subway was built) say "H&M TUNNELS", not "TUBES":

here's one that I noticed in the beginning of August at Newark Penn Station
Dock & Q: Last of a dying breed

by philipmartin
Sun Dec 13, 2009 9:58 am
Those signs look good. I wonder if they are still there, a year and a half later.
Around the time those CNJ RDG signs went up, when the Aldene plan went into effect, I was living in Jersey City and working at Hunter tower, near Waverly. I would take the PATH train from Journal Square, and when we would get to Newark, I'd stay on, and the crew would run me down to South Street. I would clime off and walk in to Hunter. They did that every morning for the few months that I was at Hunter.
The PATH would stop at Hack, Karny and Hudson to pick up and discharge railroaders outside of rush hours. Karny and Hudson even had platforms next to the PATH tracks. When I first started working for the Pennsy, PATH conductors collected tickets between Newark and Journal Square; and of course, our Pennsy pass was good.
In Later years, the PATH gave the block operators at the three towers on their line, passes, plastic cards that worked the turnstiles in Newark, Harrison and Journal Square. I worked Waldo too, for quite a while. And I worked Dock before the Aldene plan, and would route the PATH trains in and out, and to the tail track.

by neroden
Fri Dec 25, 2009 12:53 pm
Looking at those signs raises some interesting history questions for me. Those signs were *after* Amtrak, but Penn Central, CNJ, Reading et al were still running trains. This places them between 1971 (when Amtrak started operating) and 1976 (when Conrail took over Penn Central, CNJ, etc.). Can anyone pin the signs down to an even tighter date? 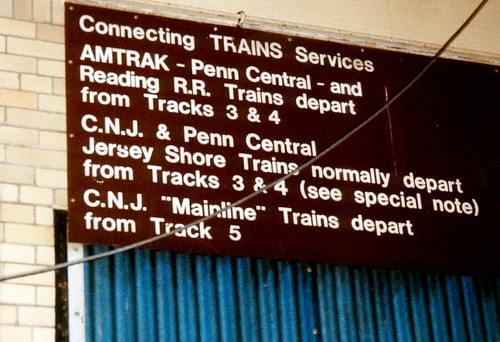 I think it was removed about 2-3 years ago
Chris