by DutchRailnut
Fri Jul 17, 2009 9:38 pm
no its to remain a movable object
If Conductors are in charge, why are they promoted to be Engineer???

ajp wrote:did Metro North ever get the waiver from the Coast Guard to make that span a fixed bridge?


Negetive. That bridge, along with all the other Harlem River crossings have to (and do) open frequently.

by ajp
Tue Jul 21, 2009 12:19 pm
so why dod the MTA apply for the waver a few years ago? Did they expect river traffic to go away?
I understood they were trying to avoid capital rebuild and maintenance costs.

by shadyjay
Tue Jul 21, 2009 1:19 pm
Does the bridge have a lot of daytime/peak hour openings? How long does it take to lift/close? Does it throw the schedules into a tailspin when it happens?

by shlustig
Tue Jul 21, 2009 2:36 pm
I don't know how it is today, but I can recall one occasion many years ago when we had to open the bridge at about 4:45PM for the fireboat. The fireboat was delayed en route and by the time it had passed and the bridge was closed we had outbound trains on all 3 outbound tracks (#'s 1, 3, and 4) backed up across the Viaduct and through the Tunnel back to Tower U. Inbounds had to be held at DB and MO and then fed to GCT on Tk. 2 from the Hudson and Harlem sides. The rest of the evening rush was a real mess due to delayed equipment and crew turns.

by MNCRR9000
Tue Jul 21, 2009 3:22 pm
Is the Harlem River drawbridge controlled remotely from the operations center or is there a bridge attendant stationed there?

by Erie-Lackawanna
Tue Jul 21, 2009 8:22 pm
The bridge opens rarely, but it does open. Recently, the Coast Guard published a proposed Federal Rule that would eliminate the Peak period curfews on Harlem River navigation traffic, thus subjecting MNR (and the TA, and the NYCDOT street crossings) to bridge openings at the height of the AM or PM Peaks. All affected parties submitted written objections, and I don't know if the issue has been finally resolved. However, it can be said with some certainty that MNR isn't currently applying for a waiver to allow the bridge to become a fixed bridge, and if we did, said application would surely be denied.

MNCRR9000 wrote:Is the Harlem River drawbridge controlled remotely from the operations center or is there a bridge attendant stationed there?

We unlock the bridge from the control center, then the bridge tender on site would open the bridge. Since I have been there, tha bridge has open maybe 4 or 5 times.
"The truth is you're the weak. And I'm the tyranny of evil men. But I'm tryin', Ringo. I'm tryin' real hard to be a shepherd."-Jules, "Pulp Fiction"

THE NEW LIFT BRIDGE: Between 1954 and 1956, the [New York Central] constructed the third railroad bridge over the Harlem River. The new bridge, which actually consists of two parallel double-track lift spans measuring 340 feet in length, carries four tracks over the Harlem River. Constructed just south of the existing swing bridge, it provides 25 feet of clearance in the closed position, and 135 feet in the open position.

by enwhycentral
Fri Sep 11, 2009 10:09 am
Does anyone know when the present day Harlem River lift bridge, which was built in the mid 1950's, was painted blue for the first time? An early photo I've seen shows the bridge and Park Avenue Viaduct both painted silver. I'd also be interested in knowing the diameter of the 128 lift cables and what the sheaves mounted halfway up on the inside of vertical tower supports are used for and what the machinery between the cables on the walkway near the top of the tower is . Is there any detailed diagram of any of the components of this bridge available as I am currently constructing a freelanced version in N scale.
You do not have the required permissions to view the files attached to this post.

by R36 Combine Coach
Sat Sep 12, 2009 12:01 am
I'd asssume the repaint occured sometime in the 1970s or early 80s. Late 60s and early 70s photos of PC service show a grime-colored structure.
Since my friend continues to chain smoke nonstop, she is probably an Alco. 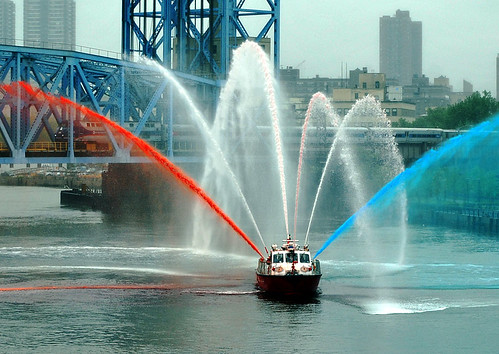 Re: Harlem River Lift Bridge - May 12