by workextra
Thu May 28, 2020 12:12 am
Hi, does anyone have Interior photos of these cars when in service on the LIRR and also when they were inservcie for the B&M.
While in LI service, we’re they all coaches with their original B&M seats?
If I’m not mistaken, I think the LI may have put the same flooring down as on the modified P72s and MP54s at the time. Did they also change the seats?
Also does anyone know how the cars AC work?
Thanks.

by tomdoyle409
Thu May 28, 2020 3:41 pm
My 40 + year old recollection is that they were all coaches, but some were converted to "coach club" cars, where about 50 percent of the seats were removed to make way for the service bar, and a standing area on the other side of the car.

The original seats were removed and replaced with the three - two configuration, that was commonplace at the time on the 72 ft cars and the 54 footers, with the exception of some ping-pong cars, that were not updated during the overhauls that took place in the mid-50's, concurrent with the 220 +/- new car acquisition from P - S. Also, the diaphragms were removed from the ends of the cars.

Also, I recall that there was a diesel generator under the floor of the car(s), which supplied power for lighting and air-conditioning. 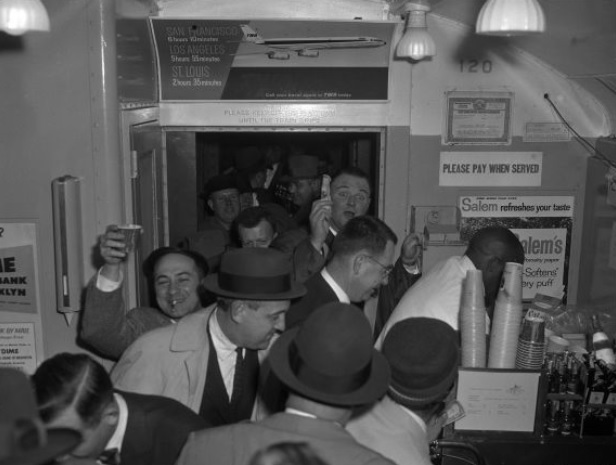 by Kelly&Kelly
Thu May 28, 2020 8:19 pm
My memories match TomDoyle's above. The cars had very tall windows that were tinted green. They had balloon roofs and were very structurally sound cars.

by workextra
Thu May 28, 2020 9:50 pm
Hi all, thanks for your help this is pointing me in the right direction.
I noticed that when LIRR removed the diaphragms/gates and installed the classic chains, they went through the process to rivet on the same
PRR stamped chain holders hoops from the MP70/MP54 fleet. Wonder if they hacked those off scrapped cars or off the shelf in the shops.

Does anyone know if LIRR relaid the flooring or was the black and white tiles the original vinyl or Asbestos types used at the time?
With a diesel generator under the car, would anyone know the voltage of the ac motor? HV 220vac 240vac Or more? Maybe DC?

A few of the AF cars were from Bangor and Aroostook.

Some of the AF cars were full length bar cars. Business was so great that at least one Pt. Jeff train had two back to back. Of course all this liquor revenue was was given up by the carrier this century so they can concentrate on their "core business".

by RGlueck
Fri May 29, 2020 7:26 am
I never saw a Ping Pong working as a club car. That's not a Ping.
Check out the cool glass light shades. Also, it's fascinating to read the advertising posters placed
in the cars. "Salem refreshes your tastes"? Yeah, right until the doctors open the corpse. Also, what model jet is that in the airline ad?

by tomdoyle409
Fri May 29, 2020 10:46 am
On several occasions during the very early ‘70’s I would occasionally take an early evening train from NYP to Manhasset on the PW line. I recall that there was a bar car on that train, that was probably an MP-54. However, I am not certain that Ping Pong cars were ever used on electrified lines.

by RGlueck
Sat May 30, 2020 8:34 pm
I stand corrected. I never saw a Ping-Pong bar car.
However a memory stirs of a MAD Magazine take-off song pertaining to LIRR bar cars, sung to the tune of "When Johnny Comes Marching Home".

I believe it was accompanied by a cartoon of steaming housewife in the family car, while snookered husband dawdled in!

RGlueck wrote: ↑Sat May 30, 2020 8:34 pm I stand corrected. I never saw a Ping-Pong bar car.
However a memory stirs of a MAD Magazine take-off song pertaining to LIRR bar cars, sung to the tune of "When Johnny Comes Marching Home". "The 5:01 has our favorite car,
the one which carries a stand-up bar,
and we'll all feel gay 'cause we took the 5:01!"
I believe it was accompanied by a cartoon of steaming housewife in the family car, while snookered husband dawdled in!

TWA never had any 720’s; the plane in the picture may have been a Boeing 707-100 series or alternatively a Convair-880. At a distance it was sometimes difficult to differentiate between the two.

TWA never had any 720’s; the plane in the picture may have been a Boeing 707-100 series or alternatively a Convair-880. At a distance it was sometimes difficult to differentiate between the two.


I stand corrected. The key is the engine pylon and the lack of a fairing under the tail of the aircraft. As rare as pictures of the interior of "American Flyer" cars!
JoeD

by workextra
Fri Jun 05, 2020 10:36 pm
Hi all,
After some research I found out the tiles were Linoleum and not asbestos as previously assumed.

As for the cars electrical On board grid.
I believe the cars were powered by axel/belt driven alternators. Which powered batteries providing power for the lighting and AC.
If this is the case, was the AC compressor. Motor and fan motor something working off low voltage at the time or was there a step up transformer to boost the voltage for those items?

Also
Does anyone know if the water tanks for the plumbing were pressurized?
I know there was 2 water tanks above the lavatories, and assume those are gravity drained.

Other than the air brake and the whistle (signal) pipe, what else was air used for?

On the LIRR car, at Riverhead it appears the old signal pipe Was retrofitted for use as main res air.
Does this make sense?