by interface76
Tue Jul 17, 2018 8:23 pm
On Sunday, while riding in from Forest Hills (thank you CityTicket!), I did my usual standing in the vestibule of the M7 I was in (no point it getting settled into a seat for that amount of time), and paid my respects as we rumbled past Whitepot Junction (or what's left of it at this point and more fill and gravel get dumped).

I couldn't help but wonder as we hit 63rd Drive what would have happened to Rego Park, had it not been a casualty of the Rockaway Beach Branch. I wonder if it would have maintained decent patronage had the platforms been against the main line tracks... It seems to have similar qualities to both Forest Hills and Kew Gardens, and the way the Queens Blvd subway line gets more and more full...

File it under "things we'll never know", I suppose...

by Pensyfan19
Thu May 14, 2020 2:19 pm
With talk of the LI RR or NYC Subway restoring service on the Rockaway Branch, it is possible that this station could be restored as a connection to main line LIRR trains.
"Look down, step over, and watch the gap!" - Dr. John Clarke, The Gap Rap (2010)

by newkirk
Thu May 14, 2020 6:45 pm
Rego Park
You do not have the required permissions to view the files attached to this post.
Bill Mangahas (AKA Newkirk Images LLC)
What did the French conductor say after his train derailed ?
Too Loose La Track.

by railfaned
Thu May 14, 2020 7:18 pm
What people forgot was that the west-bound Rockaway track became a layup track from whitepot to Win Tower that was used to store trains for the evening rush hour. That lasted until Win Tower burned down. West Side Yard took over when it came on line and they didn't need to shuttle empty trains into Penn.
As for the subway, there were two plans for the rockaway branch, one was the 63rd Drive connection. The second was the new second system subway connection to Roosevelt Ave, The station at Roosevelt Ave exists today on the upper level there as a terminal station. My Grandfather was an original IND subway employee, and he always talked about the 2 planned connections.
ED,
40 year commuter-railfan and model railroader,
Ex-Long Islander

by railfaned
Fri May 15, 2020 3:56 pm
Bill A/K/A Newkirk,
I forgot to thank you for this great historic photo. What other people have forgotten, was that NYC didn't pay enough for station maintenance and many stations just were in disrepair, not to mention abandoned.
ED,
40 year commuter-railfan and model railroader,
Ex-Long Islander 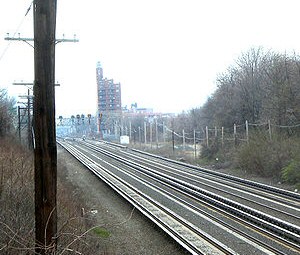