by NIMBYkiller
Sun Apr 24, 2005 10:05 pm
I read something over on subchat.com about 8 cars called Garret cars that aparently looked exactly like the M1/M3. A major difference though is that they had low level boarding capabilities which was useful because they operated on the OB line(or so I'm told).

I was wondering if anyone has anymore info on these cars. Maybe even some pictures?

Username
NIMBYkiller
Posts
1493
Joined
Fri Mar 12, 2004 6:24 pm
Location
Port Washington
by M1 9147
Sun Apr 24, 2005 10:21 pm
Jarred, these were Gas-Turbine powered cars which were also Dual-Mode, and found their ways on diesel lines for a very brief time. The problem with that was they were break down prone, they found themselves out quickly. And a few made their way onto the Metro North lines before Metro North took over, and were converted to straight electrics.. They were taken out of service shortly thereafter. Some were made by Garret, and some by I believe GE.

Username
M1 9147
Posts
1146
Joined
Thu Mar 11, 2004 10:47 pm
Location
Somewhere on the LIRR Railfanning
by Otto Vondrak
Sun Apr 24, 2005 10:49 pm
They were dual mode- 600v DC third rail or gas-turbine. They had a blue stripe, and carried two-tone M logos- lettered "METROPOLITAN." They ran on LIRR and MTA Harlem and Hudson Lines... they carried roll sign destinations for a veritable "world's tour" of commuter lines of the 1970s. They had trap doors for low-level platform boarding. I think at some point these problematic experimental cars were sent back to Budd and turned into straight electrics for MN or LIRR. My recollections are fuzzy, but these cars were well travelled! I hope others will fill in the details!

Username
Otto Vondrak
Posts
20293
Joined
Thu Mar 11, 2004 6:47 pm
Location
New York
by NIMBYkiller
Sun Apr 24, 2005 10:56 pm
I know that after they went straight electric, they only went to MN and not to LIRR. Also, someone at subchat.com says they have a roll sign which has destinations including Stewart Airport and JFK! Now that's wishful thinking!

These things kind of sound like the DMs, lol.

Username
NIMBYkiller
Posts
1493
Joined
Fri Mar 12, 2004 6:24 pm
Location
Port Washington
by Long Island 7285
Sun Apr 24, 2005 11:03 pm
too bad that the C3's were not deisgned to be compatable with LL and HL platforms. it shure would have saved the LIRR money in not haveinf to build high level platforms east of eletrification.

Username
Long Island 7285
by Dave Keller
Mon Apr 25, 2005 7:16 am
These cars did look like the M1s but had a different configuration along the roofline, probably due to whatever special equipment the unit contained.

They also had "DOT" logos on the cars (Dept. of Transportation).

I guess that 1977 was the test year. Don't know if they stayed around longer than that.

I believe Garett made four and GE (Budd) made four. The two sets were not compatable and had significant differences. They all looked similar to M-1's with different details. They had the two tone "M" logos with a Federal or DOT logo on the end doors and the sides.

For a few weeks one set made regular trips to Greenport in overnight testing. They were horribly noisy, sounding like a 747 at takeoff. You'd watch the lights go on in the farm houses enroute as you passed. They used trememdous amounts of fuel -- kerosene, as I recall and they stunk up the entire North Fork. I had the opportunity to operate one of them and they had M-1 type controls, but with a weard turbine-induced lag to the throttle response.

They had to be compatable with low level platforms, and each vendor came up with its own solution. One had a "trap door" in the vestibule that slid open to reveal stairs. Anyone on the trap door would fall out.

The other had folding stairs that dropped down under your feet -- another unnerving option.

As Otto said, they had cool roll signs; I'm lucky enough to have grabbed one off the Garett set before they were scrapped.

The GE set was converted for MetroNorth into M-1's (maybe M-3's?) by the Long Island Rail Road in Hillside Shops. They are probably still running today. The Garrett sets had "drop in" turbines that took a substantial part of the car and were deemed too much trouble to convert to electric.

Before those cars came, the LIRR had another experimental turbine car they kept in a shed on the old wye in Ronkonkoma. That was also a DOT funded project that, I believe was made from a converted Budd coach in the early 1970's. 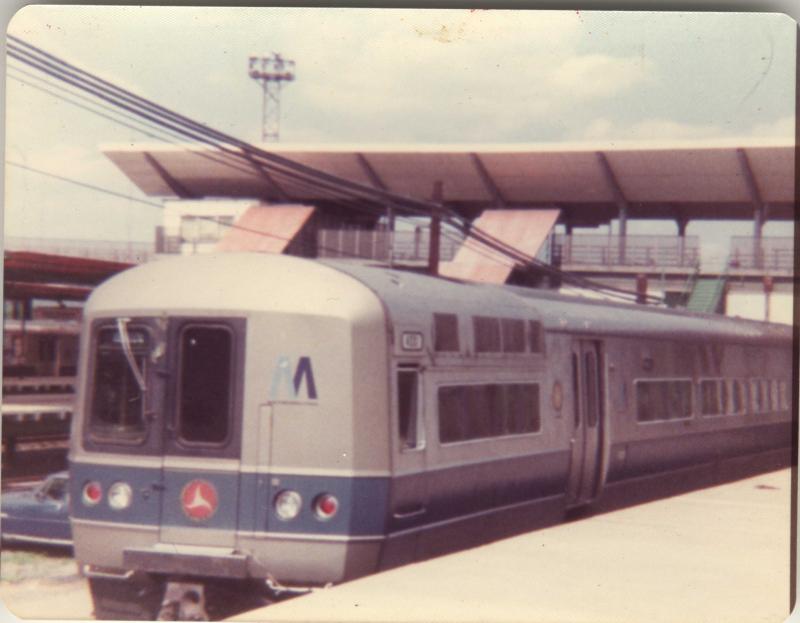 link to the railfan.net thread

I read over at subchat.com that ALL 8 cars were scrapped.

Username
METSALLTHEWAY
by newkirk
Mon Apr 25, 2005 7:51 pm
" know that after they went straight electric, they only went to MN and not to LIRR. Also, someone at subchat.com says they have a roll sign which has destinations including Stewart Airport and JFK! Now that's wishful thinking! "

Add to this was the destination of ALBANY. And not Albany, Georgia either !
Bill Mangahas (AKA Newkirk Images LLC)
What did the French conductor say after his train derailed ?
Too Loose La Track.

The first was the GT1 back in 1966. It looked very similar to the GT2. It had orange ends in lieu of the MTA yellow.

In 1969, that pre-fabricated metal shed was constructed.

There was even a large BUDD sign out front by the street, telling about the experimental car.

I remember they had an unusual horn. I lived in Holtsville, about a mile away from the tracks and could always tell it was running when it blew for the Blue Point Road crossing.