In order to install steel girders over the Cross Island Parkway that will support platforms for the future Elmont station, a weekend closure of the roadway will be necessary. To accomplish this work, a crane will need to be placed on the parkway to set the girders in place.

Lanes on the parkway will close beginning at 10 p.m. on Saturday, October 23rd and are expected to be fully reopened to traffic on Sunday, October 24th by 8 p.m.
The Alchemist
*All is potentially gold*

by AHunter3
Wed Oct 20, 2021 12:08 am
I'm wondering what impact this station will have on the tiny nearby Bellerose station. Of course I guess a lot depends on what route the new Elmont stop will be considered to be a part of. If it's Hempstead, well, they're about two football fields apart from each other, and Bellerose is one of those "first four cars" platforms with no easy way to make it longer, right?

Everyone: I have my own apprehensions about the new Elmont Station - first is how close that it is to Bellerose
as has been pointed out in this topic. Second is the substantial walking distance between Elmont and both the
Belmont Racetrack grandstand and the new UBS Arena for both racing events and Islanders games.

A shuttle bus between Elmont Station and the UBS Arena/Belmont Park will be time-consuming but workable.
The distance from the station alone may discourage ridership especially at times of inclement weather.

What may work in the LIRR's favor is that the Cross Island Parkway and Hempstead Turnpike are not designed
to handle heavy traffic adequately during large events - Belmont Stakes Day is the best example each year.

It will be interesting to see how much utilization Elmont Station gets and how it affects nearby Bellerose,
Floral Park, Queens Village and the Belmont Park stations going forward...MACTRAXX
EXPRESS TRAIN TO NEW YORK PENN STATION-NO JAMAICA ON THIS TRAIN-PLEASE STAND CLEAR OF THE CLOSING TRAIN DOORS

by CTG
Fri Oct 22, 2021 12:28 pm
I expect commuter usage of the Elmont station to be very underwhelming. Bellerose is already a fairly low usage station with almost no parking. Only a small percentage of current Bellerose walkers (those who live in Bellerose Terrace) will have a shorter walk to Elmont than they will to Bellerose. With respect to commuters using the parking lot to the south of the new Elmont station, these would not come from the current Bellerose ridership, as the layout of the road network is such that they would have a significant roundabout drive just to get to the parking lot. People who use the parking lot will be potentially coming from Franklin Square and Elmont -- but it is far from clear that driving to this parking lot and catching the LIRR from Elmont will be a meaningful upgrade on whatever commute they do today.

With respect to special events, I'm a bit more optimistic, but not much more. It really hinges on the quality of the shuttle bus service provided. If someone goes to an Islander game and then an infrequent or slow shuttle causes them to miss their train home they may be standing on the platform in Elmont for 30 or even 60 minutes in the winter cold waiting for the next train to their station. For many, that experience could be enough to cause them to consider driving the next time.

by krispy
Fri Oct 22, 2021 6:22 pm
Even though I like the other guys, the Isle fans are a tough bunch, and don't underestimate a hockey fan who now has a chance to get to the game without worrying about DWI. Also, wait and see how bad traffic is going to be on the Cross-Island. Rail can save a lot here, and after getting stuck a few times in car traffic, it may be more than initially anticipated. The LI went out of the way to provide extra service to Barclay's, I bet with a good team of bosses and a few extra trains, good things will happen. How they fix up Queens and Belmont yard will also be key. We'll see! 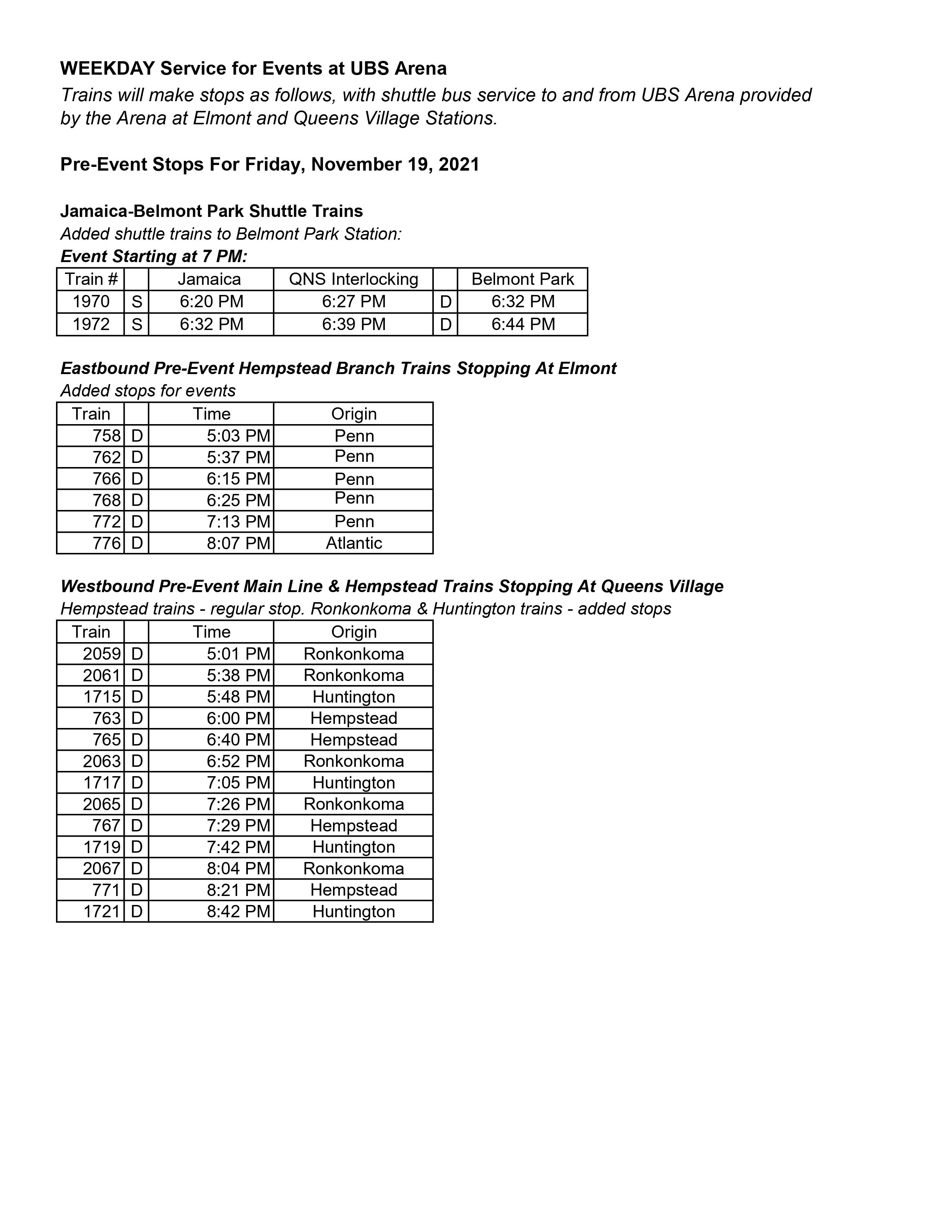 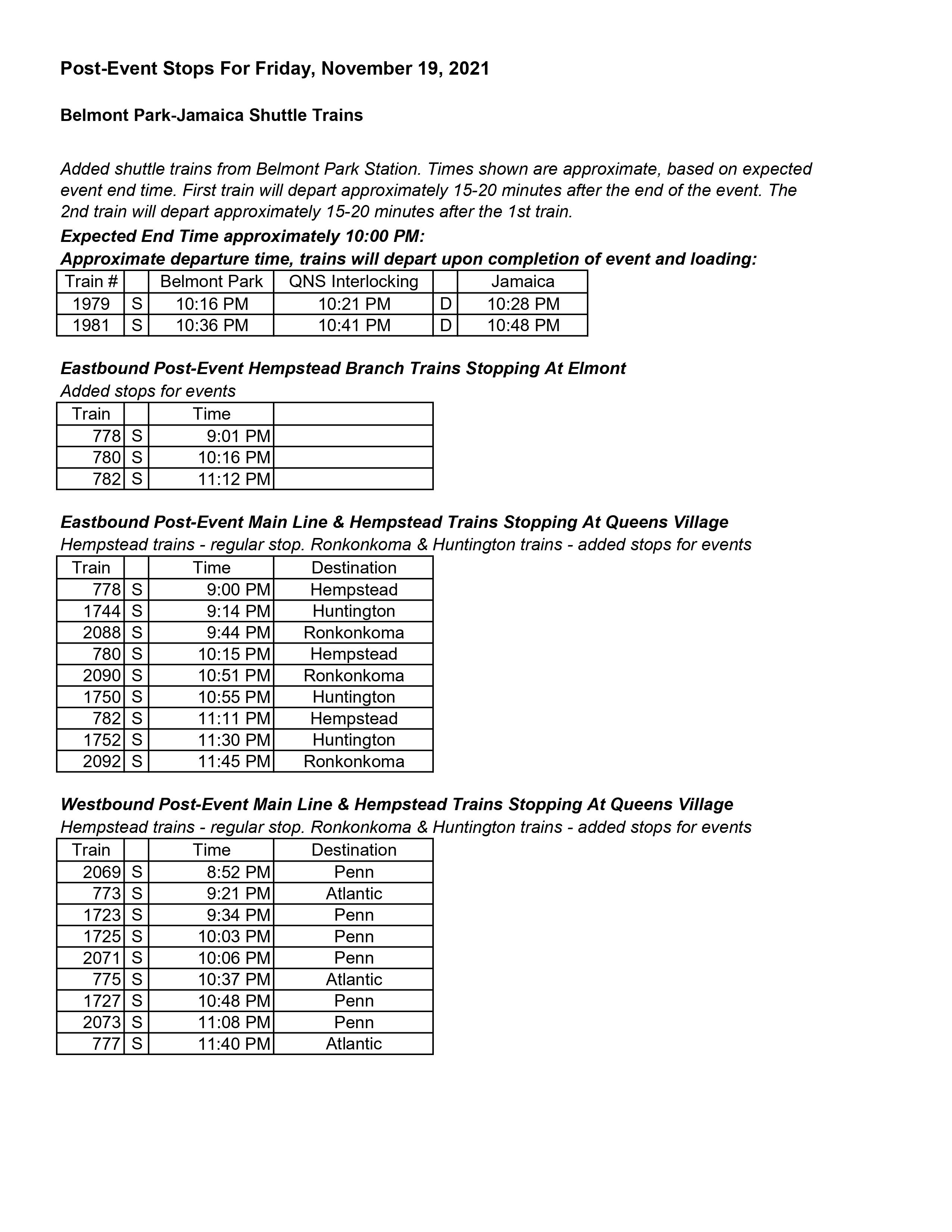 by Head-end View
Tue Nov 16, 2021 7:47 pm
Saw on NBC News today an opening ceremony was held at the Elmont Station south side platform. Apparently the north side is not completed yet.

by photobug56
Tue Nov 16, 2021 11:29 pm
I've been wondering how things are supposed to work with only one way service. Doesn't seem very useful.

by Head-end View
Wed Nov 17, 2021 8:23 pm
Relax Photobug; it's temporary. You're so quick on the trigger to criticize the LIRR. Though I have to admit, after my observation earlier this week of the TVM's at Carle Place and the LIRR's not yet having answered my e-mail inquiry, I'm leaning a little towards your viewpoint.

by photobug56
Wed Nov 17, 2021 10:11 pm
I first started commuting in 1992, so I've witnessed quite a bit of LIRR over time. But my 2nd ride on LIRR did set a tone. That was early 1980's. I'm way out east somewhere, rust bucket country (do you remember the old diesel fleet?), waiting on a low platform for a westbound train. It's coming in, and I suddenly realize, it's just slowing down some, not actually stopping. I had to run after it and grab the handle and pull myself on. During my early commuting days, on the rust buckets, there were plenty of spots where you could see through the floor to the tracks below. In winter, if heaters worked, they could melt your shoes or boots if you let them touch the heater, but you'd be freezing higher up. Sometimes, in the cars that had their own generators, lights, heat, etc. were off because no one bothered to refuel them.

So in actuality, my expectations have gotten pretty low over time. But IMHO, this opening EB only seems mainly to be a publicity stunt as part of our Gov's election campaign. I can't actually think of how most people could utilize this one way only.

As to my comments about how they answer emails, except for Helena's 'direct' email link, I've found this pretty much useless. Even when I finally would get a response, it seldom answered my issue or question. For instance, my station building was 'modernized'. I didn't ask about the horribly painful to sit on divided benches. I did ask about high intensity spotlights in the sidewalk around the building facing straight up into the eyes of the people walking by. I couldn't get a straight answer over multiple tries. I asked about there being only two next train displays on either end of a very long platform, meaning that most riders can't see the updates. I finally got an answer - we met government requirements (the displays didn't have to be useful). Numerous reports of a PA system that you couldn't hear. Etc.

There was a time, years back, before some 'old timers' retired, that you could find a way around this mentality (or lack thereof). East end of EB Huntington Station platform, probably about 1992-3), I'd get off the train fairly forward (there were seats up front), and half to walk quite a distance to find steps. I made a call to the branch manager, now retired, asked what could be done to get some steps from the platform down to ground and the ground level of the garage. An official 'fix' could have taken years, but a few days later I found a new set of perfectly usable stairs there. Not fancy, but well made and quite quickly by his staff. Problem solved, quite inexpensively.

Many years later, at my 'rebuilt' station building, I tried a few times to wait inside to get picked up. Except it was locked up tight. A sign with the hours made it clear it should be open. And once, there was an LIRR employee inside. I knocked, asked him to open up since it was supposed to be open, and he cursed me out. Point being, not the same quality of branch staff at that time. For that, I did file a formal complaint.

When Helena was President of LIRR, I knew that if something was wrong and could readily be fixed, to let her know. It would be, typically within a day or two. Since her 'departure', not so much. Phil Eng cares, but he's not reachable (unless I would choose to ambush him during his commute, which I wouldn't ever do). And my impression is that he has little control over what goes on, anyway. And I have minimal patience for mediocrity. Nothing's perfect, but too much at LIRR, IMHO, is mediocre. Like train speeds averaging under 30 on some rush hour trains I took pre pandemic. Nothing better than 40. LIRR feels as slow as a tourist railroad, not like a serious commuter railroad.

As to Elmont, first 'half' station I've ever heard of! I know, that sometime next year that will be remedied, but right now, I can't figure out any reason why they opened only half a station without waiting for the other half. I also can't figure out the purpose of the station since it's so far away from the arena and there already is the Belmont station much closer.
Last edited by nomis on Sat Nov 27, 2021 9:46 pm, edited 1 time in total. Reason: Removed unnecessary quote

by nyandw
Fri Nov 26, 2021 11:57 pm
photobug56: Thanks for the vote. I have to leave the conjuncture/reasoning/and other issues to others! Not my role. If you go back thorough the previous 10 pages on this issue you'll see numerous opinions including it will never happen.
Steve Lynch
Long Island Rail Road :: Trains Are Fun

photobug56 wrote: ↑Fri Nov 26, 2021 11:47 pm
As to Elmont, first 'half' station I've ever heard of! I know, that sometime next year that will be
remedied, but right now, I can't figure out any reason why they opened only half a station without
waiting for the other half.

I vaguely recall reading the elevated Floral Park station was built in two halves in the early 1960s.

Aqueduct Racetrack on the (A) subway is a single platform northbound only, without a southbound side.
Since my friend continues to chain smoke nonstop, she is probably an Alco.