by nyandw
Wed Oct 09, 2019 10:25 pm
MINEOLA-Tower-Timers_Gary_Farkash.jpg
From Gary Farkash-OBRM: The Mineola Historical Society asked to assist them in putting together their model board from Nassau Tower. The board is missing a large part from the bottom, but is also missing one of the 5 countdown timers. They had 3 in inventory, but found 4, which I installed with help from the folks there. 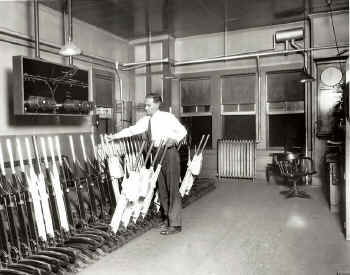 1930 Mineola Historical Society
You do not have the required permissions to view the files attached to this post.
Steve Lynch
Long Island Rail Road :: Trains Are Fun

by krispy
Thu Oct 10, 2019 7:07 am
Wow, I'm glad to see someone saved it, I had thought it wound up in the dumpster with the rest of the strong-arms at Nassau. Ask them to reach out to the LIRR, the signal guys may have had one stashed around still. The last ones on the property were probably the ones from the old B Tower machine that was used in the signal learning lab at Hillside. The main maintainer in charge of those machines was called the "valve and locking tech", and several of the ones I knew would try to salvage and store components from old model 14's etc. to barter for parts with other railroads. I remember one gent working with the guys who maintained the Cape Cod rail bridge tower or Amtrak's Livingston Ave Bridge in an effort to secure parts for their older interlocking machines. The ones working now may still keep in charge with the retirees who may know where, etc. to look. Also, try the group running the Norwalk switch tower, they may know of someone who could help.

Screw releases served a purpose of preventing an operator from changing a route established with a train "tapped on" until a set time had passed. This way the train could stop, or if it couldn't, it would block the operator from throwing a switch in the route. Therefore many had different times, so like in a big interlocking or a yard, the time could be small, but if it was a place like Nassau or Harold where the trains were going at MAS, a longer time. They were encased in a glass jar like container with a hole in the middle for the crank to activate the timer. (and each one had a locked chain to prevent access to the guts inside by anyone but the maintainer) If the timer was started, the signal would drop to stop, it would run (with a loud buzzing noise that would alert anyone nearby that someone was about to get into BIG trouble), and then after the time ran down, you could restore the signal to stop and then change the route. This was done after the operator had reached out to the engineer to take back the signal, or the operator would be in BIGGER trouble if he dropped it in their face. Also, if I was taking a track out of service, I could display a signal over a route into the out of service track, put the signal back into the notch to drop it, and then "can" it and run the screw release. Once having done that, it was virtually fool proof way of protecting that track, as even if the power went out, no air, etc., there was just no way you could get into that route. Some of the newer Model 14 machines had the screw release mechanism set within the "apron", Jay and Brook are two that come to mind that had that. Instead of the big glass screw releases, you would turn a dial set into the apron that would control a group of signals (or traffic, some had that ability also) and had lights on either side. Some signals would take 1 light (30-90 seconds) or others would take 2 lights (90 secs to 3 minutes). Usually the dwarves/low homes and pedestals were one, the PL's were two lights. Keep in mind if you ran the clock on a train that was already a few minutes off, then they were officially late, and someone would have to answer as to why.

The last model 14 with screw releases if I recall was Hall, which was 2010 or 2011, not including the B Tower machine in the signal lab. All signals today still have some form of this, but now you just select "cancel" in the menu, and then watch it flash red as it runs time. With the screw releases you could at least watch it wind down, now you sit and stare and hope that clock on the wall isn't slowing down like you think it is.

by BuddR32
Fri Oct 11, 2019 12:09 am
The Machine from B-Tower went to the NY Transit Museum a few years back. Definitely reach out to the signal training guys at the railroad. They're big into history & preserving it.

by LB
Fri Oct 11, 2019 3:24 pm
Is Nassau Tower still in service, or has another facility taken over its functions? With 3rd project moving along, I wasn't sure when Nassau goes out of service. Will Nassau Interlocking control change over to Divide, Queens or JTC?

by Kelly&Kelly
Fri Oct 11, 2019 4:53 pm
Note the Wye on the model board in the 1930 photo showing the New York Bay Extension Railroad to Country Life Press. Ever wonder why the Signal on the West Hempstead Branch was numbered with an "E"? That represented the predecessor of the branch, organized in 1897...

by Head-end View
Fri Oct 11, 2019 9:30 pm
LB, Nassau Tower is still in-service for now, but will be eliminated with the third track construction. I would assume that its functions will be transferred to the Jamaica Station Control Center (JSCC), as I believe the plan is to eventually centralize most or all LIRR dispatching at that facility as the towers are gradually phased out.

Kelly&Kelly wrote: ↑Fri Oct 11, 2019 4:53 pm Note the Wye on the model board in the 1930 photo showing the New York Bay Extension Railroad to Country Life Press. Ever wonder why the Signal on the West Hempstead Branch was numbered with an "E"? That represented the predecessor of the branch, organized in 1897...

I was amazed at what had been there and some of us had spoken about why so few levers were there at the end of the machine's use. There was a heck of a lot of sidings painted over. I was told that the job had been very busy at one time and merited a lever man in addition to the operator at one point. They did have a lot more "motor jobs" that ended at E. Williston as opposed to the one that runs in the AM rush.

At one time someone had recovered from the attic some old block sheets and frequent mention of "Fairgrounds". Later I found out that the Fairgrounds was located along that branch several blocks south of Old Country and a few east of Franklin, and some of the buildings at Old Bethpage restoration were taken from or modeled from what had been at that site.

by Backshophoss
Sat Oct 12, 2019 7:51 pm
By now,Nassau is controlled by a desk top maintainer board,it would not surprise me If LIRR buys a container construction office,plants
it in the lot LIRR has between the mainline and the O B branch,then moves the board there.
Other than Jay and Hall that became JSCC,nothing else has been moved to Jamaica.
Divide is still in use,and Babylon East got the Montauk CTC.
The Land of Enchantment is not Flyover country!

by Head-end View
Sun Oct 13, 2019 7:07 pm
For those of us that have never been block operators, what exactly is a desktop maintainer board? Thanks!

by Backshophoss
Mon Oct 14, 2019 4:06 pm
A model board that normally lives in the signal hut,allows maintainers to test switches,etc.
PD was the first to get that setup before the board was moved to Babylon East,tower was closed and razed.
Most of the larger Signal Huts at the ESA project will have the maintainer boards installed
The Land of Enchantment is not Flyover country!

by Head-end View
Mon Oct 14, 2019 7:27 pm
Thanks Backshophoss. And when you say Babylon East, I assume you're talking about Babylon Tower, right?

by Backshophoss
Tue Oct 15, 2019 5:21 pm
that's a desk in that tower that covers the montauk CTC.
The Land of Enchantment is not Flyover country!

by krispy
Tue Oct 15, 2019 7:15 pm
Two jobs at Babylon, "Babylon West" and "Babylon East". West covers the original job, Babylon west up to Freeport, and East is what PD was until it was closed and moved into Babylon Tower back in 2006. Using that name on the radio gets you the operator covering that territory, etc.

by Head-end View
Tue Oct 15, 2019 8:20 pm
Thanks Krispy. It must be a crowded room there nowadays at Babylon Tower unless it was enlarged in some way? Does Babylon West also cover Port Interlocking or is that done by Valley Tower?

by Backshophoss
Tue Oct 15, 2019 8:26 pm
Port was set up to be remoted to Valley or Babylon,and included the yard at Port
The Land of Enchantment is not Flyover country!