Discussion about the Union Pacific operations past and present. Official site can be found here: UPRR.COM.

I noticed this picture. It is of UPY #2706. The locomotive designation is a 3GS21B. Now, after a little research, I cannot seem to kind a lot of information on this type of unit. I know BNSF has a few too. They remind me of a stretched switcher! 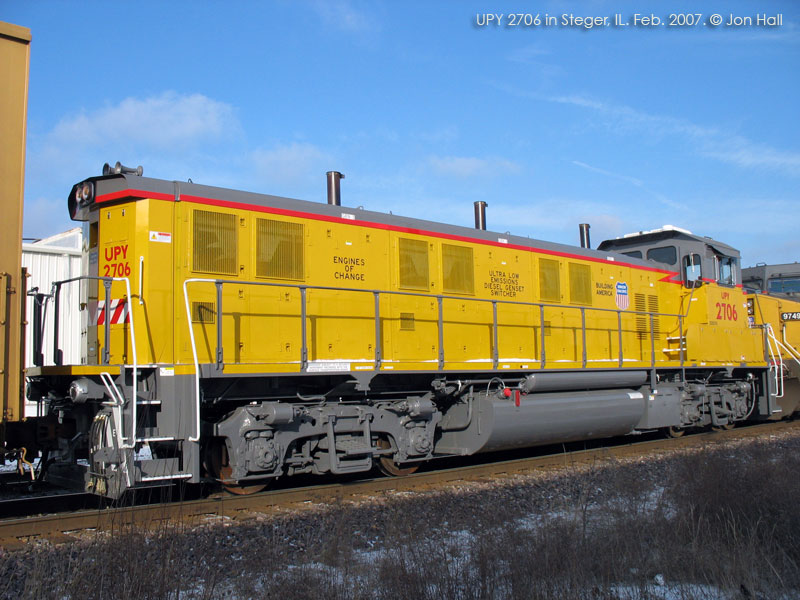 It says pretty much everything about it, in about the middle of the long hood!!!

It has 3 engine/generator sets (aka Gensets) which in total provide about 2100 horsepower. Each engine produces about 700HP, and depending on the power required determines how many engines of the three are on - it saves fuel compared to say a GP38, with one engine and putting out 2000HP, that is always on, no matter how many cars its pulling or sitting at idle. the genset can shut the other engines off and only be running on the one while at idle or while moving itself around lite, or pulling one or two cars.
On the RR, "believe nothing you hear and only half of what you see"
John, aka "JTGSHU" passed away on August 26, 2013. We honor his memory and his devotion to railroading at railroad.net.
Top

there's an ad for them on the back of some recent TRAINS magazines. that's all i can tell you.
Top

Isn't that all Cummins power in there?
Yeah, a "TRAINS" magazine has info on the Genset switchers.
Each engine seems to have its own alternator. With both the D77 and D78 traction motors available on either of the two Gensets, how can you tell as to which type is used?
I have to ride seven kilometers to get to my railfanning-spot... and other teens think they have it hard!
Top
5 posts • Page 1 of 1