by SignalPAD
Tue Apr 15, 2008 8:54 pm
I do more reading than posting, but this bit of information was really interesting. A friend of mine gave me the heads up on this. We're both civils' and interested in trains, so the following topic arose naturally. Aside from the usual stuff, which is mostly MBTA related, he said that one of the projects would be of some potential interest was the rehabilitation and reactivation of the waterfront industrial track that runs past the South Boston Convention Center, the ramps for the Ted Williams tunnel, and along Drydock Avenue/ Black Falcon cruise terminal.
Google Maps Path
He said that they were going to clean up the track and then take a locomotive down for some testing. Today I was in the neighborhood and decided to take a look to see if there was any indication of work or activity.
Sure enough there were some markings on the pavement that is covering the tracks (now a parking lot) and there were signs saying not to park ones car on the tracks, and that there would be work from 8.00PM to 5.00AM.
Sign 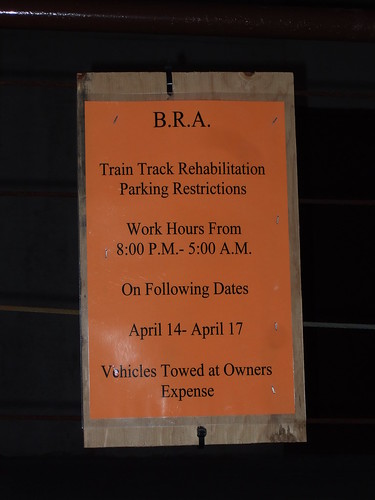 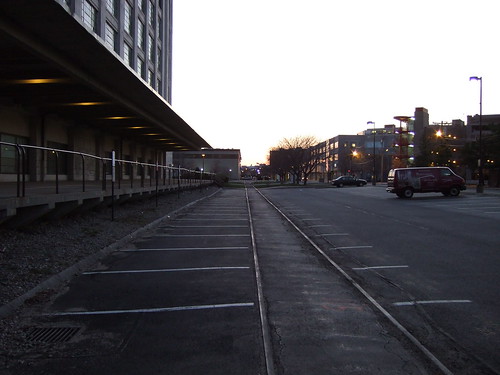 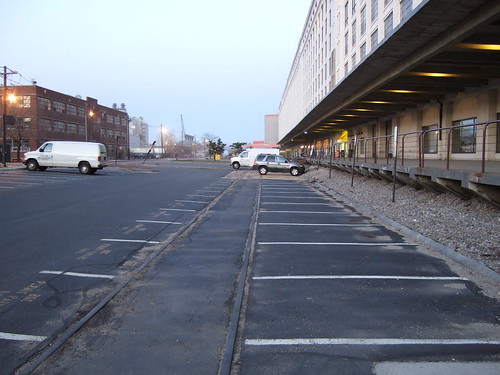 I was wondering why they would like to reactivate this line, most of the building that is close to the tracks has been converted into offices and light industry. There is even an Au Bon Pain Cafe for all of the office workers, which you can see as the yellow awning in the third picture. I do know that close to the very end of the line on the pier is a cement depot and some truck loading docks, but this does not seem like it will attract much traffic.

So I have two questions:
1. What type of traffic will this carry? (curiosity)
2. When they might send the test loco down the tracks? (Typical railfan, I want to get a picture)

If anyone has any info about this it would be greatly appreciated.
Thanks,
SPAD
Last edited by SignalPAD on Tue Apr 22, 2008 6:27 pm, edited 2 times in total.

Username
SignalPAD
by pablo
Tue Apr 15, 2008 9:24 pm
Great stuff. I'm eager to hear what this will be. It's interesting stuff down there, much like the waterfront trackage in San Francisco, which supposedly had a unit run light down the tracks just to fulfill some agreement from years ago.

Username
pablo
Posts
1479
Joined
Sat Mar 13, 2004 7:58 am
Location
Warren, PA
by CSX Conductor
Wed Apr 16, 2008 9:07 am
This is the first I've heard of them finally clearing the rail from the Guard shack to the pier. There were many small sections of rail covered by tar, but that's an easy fix.

Massport and another private developer are trying to get some sort of rail traffic up and running again. Supposedly it's someone who wants to bring in ships of cement and load cars in South Boston and ship by rail from the Drydock area. It will be a while before they take an engine down there from what I have heard as they need to reconfigure some track and possibly even put new track in leading to the new customer's site.

This is all owned by CSX, correct? Does CSX own all the way out to the cement terminal? Who is paying for this project? I can't imagine CSX cares about this, and why would Massport fund improvements to CSX trackage?

BRT and their eviction:

Negative, Boston RailWay Terminal only had what's left of the old First Street Yard, which is just the track behind what is now the Boston Convention & Exposition Center.


dbperry wrote:This is all owned by CSX, correct? Does CSX own all the way out to the cement terminal? Who is paying for this project?

Massport owns the Street-running section. I beleive the rebuilt track from behind the BCEC was done by Massport because they tore up all of the track during the Ted Williams tunnel construction and once all of the tunnel work was done they put the track back (although with some differences).[/quote]

Username
CSX Conductor
Posts
5458
Joined
Fri Mar 12, 2004 12:04 am
Location
Boston, Mass
by drayrr
Mon Apr 21, 2008 11:51 am
Both MassPort and BRA are interested in seeing rail use. The possibility is a developer of the so called North Jetty area, which is north of Fid Kennedy Blvd. A new track would have to be built in Tide Street to access the North Jetty. There was some possibility of cement from ship to rail.

Due ot the distance from either Readville or Beacon Park, the congested nature of this area and the fact that car volumes woudl be very low (there isn't much room when you finally get there), IMHO this will never amount to anything. MassPort and BRA do seem willing to spend several million dollars to complet the route. It will be intetesting to see what happens if they do complete the track connection. I would not hold my breath

by fsdemasi
Mon Apr 21, 2008 11:54 pm
MassPort ownes Track 61 that runs from the Boston Convention Center to The Boston Marine Industrial Park. Plans for the new rail spurs into the North Jetty Area are found at URL http://www.massport.com/about/pdf/port_plan_brief.pdf

Freight is forwarded by CSX from Framingham to Readville then up the Fairmount Branch to South Boston. At Bay Junction a reverse move is required to get to the small CSX yard (Formerly Boston Terminal) then to track 61 and into the Boston Marine Industrial Park.

The tracks shown in the pictures were one of three tracks that served the Boston Army Base Warehouse now part of the Boston Design Center and commercial space. I used to work in this building for the Department of Defense untill it was sold to the city in 1984. The remaing track leads to two remaining on dock tracks by a barge transfer for cement not now rail served and formerly to a large transload ware house converted to truck only use and more commercial office space.
Frank D...

Username
fsdemasi
Posts
17
Joined
Mon Apr 21, 2008 11:22 pm
by SignalPAD
Thu Apr 24, 2008 9:47 am
CSX Conductor, drayrr, and fsdemasi thanks for the good information. I went back down to the same spot yesterday and checked for progress, as the workdays listed on the signs are now over. It seems that they have cleared all of the flangeways and cleaned up some of the areas that were covered with grass. They have not however removed the asphalt from the short sections that were paved over (pedestrian walkways).

I did not do any measurements but the geometry looks decent, but there are some small (0.5-1" in length) gaps in the rail, many of the the bolts which join the rails are loose, and the ties in the formerly grassy sections are thoroughly rotten (I poked them with a knife and there was no resistance). I can't say anything about the condition of the tie and ballast for the parking lot sections as they only removed enough material to clear the flangeway. In addition, no work has been done on the switches at the far end near the cement storage facility, they don't look good at all. 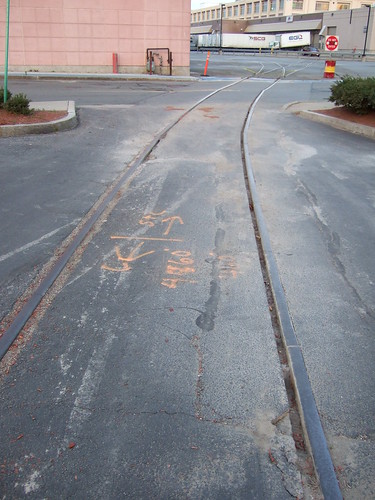 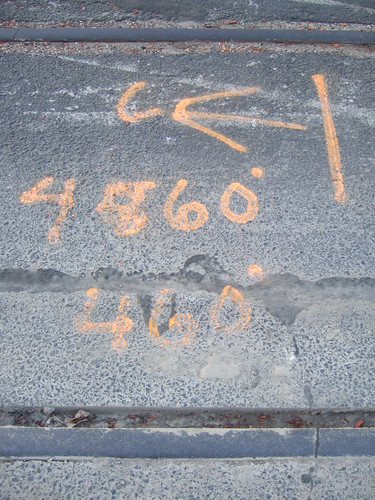 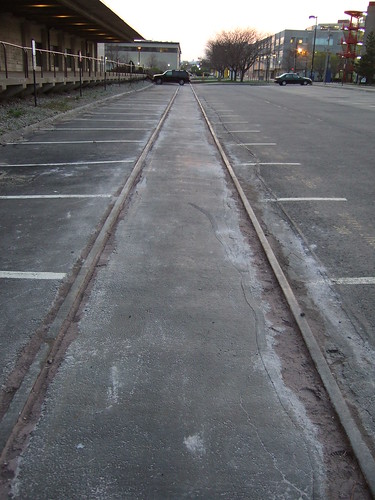 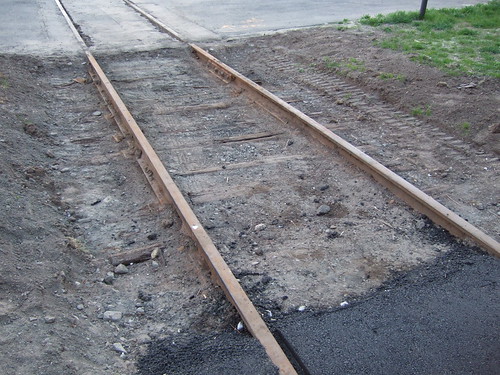 There are more pictures in the set on my flickr, they show more details of some of the work that has been done Track 61 Rehabilitation.
I will keep you posted with regard to the work, I just ask that if anyone has any information about a possible run down the track, to let all of us know.

Username
SignalPAD
by highgreen1
Fri Apr 25, 2008 2:41 pm
I always wondered why this track could not be used for combination boat and rail passenger tours. I can visualize tour boats docking at Black Faclcon Terminal and passengers transferring to luxury rail coaches for, perhaps, Fall foliage tours. Any merit to this idea?

The contractor performing the work thinks CSX may run a test move over track 61 Sunday 27 APR.

I like your idea for passenger intermodal rail to ship use. The tracks are there and most of the line up to the Marine Industrial Park is new heavy welded rail. The site of the Falcon Terminal is the long since gone US Army Base. It was set up for debarkation of men and equipment during the two world wars. So rail to ship movement of passengers was done many years ago. I believe the same situation exists in the port of Halifax.

The new work is supported by the BRA/EOT/MassPort/VHB, in conjunction with development of the North Jetty in the industrial park.

Sorry for the late post. I have no idea what time this event will occur.

by fsdemasi
Sat Apr 26, 2008 11:24 pm
At the URL find an interesting speach by Senator Kennedy made in 1954 to save the Piers and infrastructure at the former Army Base (Black Falcon Terminal) http://www.jfklibrary.org/Historical+Re ... MAY11a.htm

Username
fsdemasi
Posts
17
Joined
Mon Apr 21, 2008 11:22 pm
by SignalPAD
Wed May 28, 2008 7:34 pm
Sorry for letting this lapse for a month. Fsdemasi, thanks for the tip. I did go down to the waterfront on 27 April, however I did not see any activity. I recently revisited the site on 27 May and there were no signs of past or present activity. There were no fresh or recently rusted scuffs on the rails and all of the paint applied to the top of the rail for parking space markings was intact (if any heavy steel wheeled vehicle passed it would have chipped or removed the thick parking paint). Also the pedestrian walkways are still covered with 1-3 in of asphalt. If anyone hears any further details please keep us all informed.

by FatNoah
Fri Jan 02, 2009 3:14 pm
I'm digging up an old thread here, but I used to work in World Trade Center West and watched the reconstruction of a portion of this line every day at lunch.

I found the following map which seems to illustrate some of the possible extensions mentioned above (map seems to be somewhat dated, but useful for discussion):
http://www.atlanticnortheast.com/regn/m ... 113416.pdf

Does anyone have any more word/idea on what is happening in this area?

There is no longer a connection between the Dorchester Branch and the South Boston Industrial track. The train would have to go towards South Station and clear Broad interlocking, then shove back on the Middleboro Mainline to clear Fly Interlocking @ Southampton Street, then pull into the small yard there and continue down towards the Port. Also, you can't turn a very large train between Broad & the end of the platforms at South Station. Don't forget clearances on the Dorchester, can't take TOFC's or doublestacked COFC's...or any railcars exceeding PLate C. The quicker route would be back out of Fly Interlocking onto the Middleboro Main, head towards Boston and take the Wye Connector to Cove Interlocking and get onto the B&A there, but again clearance is an issue for anything bigger than mentioned above.