by quadrock
Thu Apr 05, 2007 12:34 pm
They were very touchy about it to me too. I actually went down to the track from the lower level (where there was no kiosk) and they sent me and a few others back up to get stamped. Like I said before, seems kinda pointless when I'm sure passengers boarding at the small stations at points north don't go through the same procedure.

quadrock wrote:They were very touchy about it to me too. I actually went down to the track from the lower level (where there was no kiosk) and they sent me and a few others back up to get stamped. Like I said before, seems kinda pointless when I'm sure passengers boarding at the small stations at points north don't go through the same procedure.

My suspicion is that they are trying to avoid exit from USA and entry into Canada issues ahead of time as much as they can. To the extent that they can document each international passenger before departure it will save them headaches later. The closer to the border that a passenger boards, the less of a problem that's ultimately created if it's found that a passenger isn't allowed to exit the USA or enter Canada. Getting someone back to Plattsburgh isn't nearly the big deal it would be compared to getting them back to NYC.

The train offered a special menu and checked baggage service, with special arrangements available for recreational equipment. One of Amtrak's Albany based ticket agents who also happens to be an accomplished artist painted a wonderful series of murals for the lounge car, and a variety of things were done to make the service special.

Nothing whatsoever remains of all of that work and creative energy.

Username
Rhinecliff
Posts
702
Joined
Sat Mar 13, 2004 2:19 pm
Location
Blue State
by quadrock
Thu Apr 05, 2007 10:33 pm
I guess I could see the reasoning behind that in one way. But in another, a passenger boarding at Croton-on-Hudson, which is only 30 or so minutes from NYC, would have the same problem and still not be checked.

Username
quadrock
Posts
339
Joined
Mon Mar 07, 2005 11:03 pm
by hsr_fan
Thu Apr 05, 2007 11:51 pm
When I traveled to Montreal it was only by chance that I happened to notice that little "check in kiosk" as I stood in the waiting area. I almost didn't get the little Canada tags on my baggage. I really didn't see the point of that thing.

quadrock wrote:I guess I could see the reasoning behind that in one way. But in another, a passenger boarding at Croton-on-Hudson, which is only 30 or so minutes from NYC, would have the same problem and still not be checked.

I probably wasn't too clear in my previous post. It's doubtful that Amtrak thinks they must attempt pre-screening of 100% of their Canada-bound passengers. However, if they can pre-screen most of the ones that are furthest away from the border then they lessen the issue of what to do with those who are denied exit/entry. Sure Croton is not far from NYP but how many passengers bound for Montreal board there versus NYP? Very few, I'm sure.

Username
MudLake
Posts
1153
Joined
Wed Jan 24, 2007 6:02 pm
by Railjunkie
Fri Apr 06, 2007 9:00 am
The reason for the pre screen at NYP is to make sure you have the proper documents to cross the boader. Your name is checked against the manifest and then the list of names is sent to customs/immigration. Passengers who board at other stations are included on the list if someone boards and is not on the list a phone call will be made to the proper authorities. If you have ever traveled the train 69 and had an exit check they may have found a problem with one of the passengers or it was completly random. As a side note the same will happen if you were traveling on train 63 to Canada.

What causes delays on the Adirondack?

by NJTKid01
Mon Jul 23, 2007 5:03 pm
Hey guys, maybe you could shed some light on this for me, I recently had this interest in going to Montreal to explore their public transit and I researched on several travel options from New York to Montreal. I never liked the idea of taking Greyhound and certainly flying for me is a huge blow to my budget, so I decided to give Amtrak a shot. But I checked the status of train # 69 NB departure from New York to Montreal. The train is supposedly due in Montreal at 6:30 PM. But one time, it didn't get to Montreal until 10:15 PM, that's nearly 3 1/2 hour delay. I just wanted to know, what holds up this train for so long, could it possibly due to customs at the border? Thanks! Also, I would like know some info about the ride, if have you any.

Username
NJTKid01
by hsr_fan
Mon Jul 23, 2007 5:30 pm
I took the trip back in October, and we were over two hours late into Montreal. The first major delay was when we were held at Saratoga to wait for the southbound Ethan Allen. North of there, it was just slow going the whole way, and we seemed to keep losing time. Then, the customs stop at the border took well over an hour, and upon leaving customs, we were stuck behind a freight train doing like 10 mph. Overall, a ridiculously slow journey...can't say I'd do it again!

Why on earth didn't this train get its 60 seat Amfleets back after the Acelas were brough back online? High density Amfleet coaches are totally inappropriate for a run of this length.

Username
hsr_fan
by jck
Mon Jul 23, 2007 5:35 pm
North of Albany, the train moves extremely slowly. The scheduled time from Saratoga Springs to Montreal is almost 7 hours. If it's coming in three hours late on top of that, that pretty awful. It's under 200 road miles.

Username
jck
Posts
351
Joined
Thu Jul 06, 2006 11:46 am
by NJTKid01
Mon Jul 23, 2007 10:12 pm
It really sounds like this train takes a backseat to everything and their mother on the tracks north of Albany. If you're loosing time by a 1/2 hour or so, that's fine and all by just don't let it be a habit. When I saw that this train strolls into Montreal four to six hours later, its unbelievable.

Username
NJTKid01
by PRRTechFan
Mon Jul 23, 2007 10:17 pm
Gentlemen, my experience on the Adirondack was not quite as bad. It was just around July 4th two years ago. While there was a sign posted in NYP on the Solari board that warned of up to one hour delays between New York and Albany (due to track construction) on all Empire Service trains, we did not experience that this trip. We stopped just north of the bridge crossing the Harlem River for a track switch problem, but that lasted only 4-5 minutes.

For someone who never travelled off of the Northeast corridor and was expecting top speeds of maybe 70mph, I was pleasantly suprised; we flew all the way to Albany at speeds greater than that. The Hudson River on the left side of the train on the way north was spectacular.

We crawled out of Albany, across the Hudson River and into Albany proper; then took off and flew for a short trip to Schenectady. Crawled just a bit leaving Schenectady, then took off to Saratoga Springs.

Leaving Saratoga Springs, we quickly slowed down to a snail's pace... I don't think we did more than 30mph for maybe a half hour. There was no explanation; except that there had been torrential rain the night before early into the morning. I noticed no sign of track work or other problems; nor do I know whether there were weather related signal problems or if we were following a freight train; although we never passed a freight train on a siding before we resumed speed. About 30 minutes later, we picked up speed.

On this stretch of the trip, the view is of Lake Champlaign off to the right. We maintained good speed for the rest of the trip; an occasional speed reduction for a curve or two, but I would estimate that maximum speeds were at least 80mph if not slightly greater. My stop was at Rouses Point, the last stop in the US.

Several days later, I took the Adirondack back from Rouses Point to Saratoga Springs. The wife of the friends I was visiting is a US Customs inspector at the border; and although she does not usually work the train, she did tell me that the inspection takes quite a while.... In fact, she called her office to find out when the train actually arrived at Rouses Point, and a half hour later we left for the 20 minute ride to the station.

Well, the train was still there and was not yet open for boarding pending the inspectors finishing. I would say that it was at least another hour before they were done and we could board the train. I don't remember exactly, but I think we left approximately 1-1/2 hours late...

So based on my experience, I would suggest that the biggest train delay would be customs inspection on returning to the US; but my friend's wife tells me that delays for automobile traffic re-entering at Champlaign on the Northway (I-87) can reach well over one hour on Sunday afternoons in the summer...

Username
PRRTechFan
Posts
424
Joined
Tue Nov 16, 2004 9:44 pm
Location
Manasquan, N.J. on the NJCL
by NJTKid01
Mon Jul 23, 2007 10:27 pm
I'm assuming there has to be something north of Albany, whether freight trains or etc., there's something that slows these trains down like this. There is no way that trains travel this slow. But since I'm use to the NE Corridor. everything seems to go at a "snail's pace"

Username
NJTKid01
by jz441
Mon Jul 23, 2007 10:35 pm
What is the method of operation north of Albany?
What is the maximum authorized speed for freight and passenger trains?

I'd never use the Adirondack north of Albany again. Ridiculous customs delays, crappy track, bizarre customers (one guy crapped himself and kept running to the railfone every 20 minutes )was enough for my wife and I to decide to pretty much never go there again... Flying is really expensive.. And what's with the ridiculous customs stop? no wonder all the medication seekers go by bus... 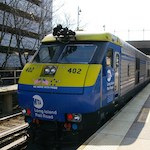