by Alex M
Sat May 16, 2020 8:26 am
I recall from the last monthly performance report that Amtrak put out that the Carolinian had a 3 million dollar operating surplus while the Piedmonts were breaking even or were not far from it. This seems that, from first glance, the NC services cover their costs. Of course, there are other expenses not visible that are PRIIA mandated so the real expense is not obvious.

by SouthernRailway
Sat May 16, 2020 9:29 am
Agreed. For the Piedmonts, it seems unlikely that a short train with 2 locomotives and food service expenses would be breaking even.

Alex M wrote: ↑Sat May 16, 2020 8:26 am I recall from the last monthly performance report that Amtrak put out that the Carolinian had a 3 million dollar operating surplus while the Piedmonts were breaking even or were not far from it. This seems that, from first glance, the NC services cover their costs. Of course, there are other expenses not visible that are PRIIA mandated so the real expense is not obvious.

North Carolina DOT said in a 2017 presentation (same one listing the proposal to extend the Carolinian to New Haven) that in FFY 2016 the Carolinian had 75% farebox recovery while the Piedmont's was only 28%. Though of course this predates the 3rd Piedmont round trip, and NC projected farebox recovery increasing with the additional round trip(s), the end of the Piedmont Improvement Program slate of projects, and the opening of the new Charlotte Gateway Station. These Amtrak numbers from 2015-2016 on pg. 41 are similar to Amtrak's 2019 numbers and show the Carolinian with a surplus and the Piedmont not breaking even, but better than what 28% farebox recovery would suggest. I'm no accountant, but it definitely looks like the two sets of numbers are using different metrics. My uneducated guess is NCDOT's numbers for the Carolinian include only the Washington-Charlotte portion while Amtrak's numbers include the full route, which would also muddy a comparison, but it's not clear to me.

by west point
Sat May 16, 2020 11:52 pm
What would help North Carolina is if infrastructure funds come available to NC DOT then the upgrade of its part of the "S" line and funds to make Raleigh - Greensboro completely 2 main tracks and eliminate many of the grade crossings.

by Jeff Smith
Sun May 17, 2020 4:14 pm
Wow, that was a detailed reply, thanks! Learned a lot. Thanks, Riverduck. I didn't factor in SEHSR as it really hasn't been in the news, as you note in the lack of funding. I guess the question then is the slots on the NEC and North River tunnels; my question would be would Amtrak want to risk extending Regionals, potentially introducing time delays from long(er) distance trains? Ownership of the RF&P by VA ameliorates some of that; what happens when they get into non-friendly dispatch area? How much of these extensions are dispatched by passenger operators instead of freight?

njt/mnrrbuff wrote: ↑Fri May 08, 2020 5:10 pm Within the next decade as part of the improvements for Virginia to buy the RF&P and the possibility of the S-Line being reactivated, Virginia DOT, NCDOT is going to give Amtrak the approval to run four additional Carolinian trains each way from NYP to Charlotte and back. In addition, NCDOT is going to allow Amtrak to add some more Piedmont trains. With the addition of the increased Amtrak frequencies in the next 10 years, it's going to be critical to have that brand new yard built west of Charlotte.
...

Although off-topic, allowing that it was in response to Mr. Roberts, to whom I defer on all matters NC, I'm going to answer with a question: Where do you think Amtrak is going to find four slots (eight round trip) in the North River Tunnels? Or will VA acquiesce to NC plans, since they'll own the ROW?What's your source? Also, who's funding this? My impression is the Piedmont and Carolinian are NC funded, not Amtrak.

NOTE: I"ll move this to the NC topic, and edit out the OT portion in this thread. No harm, no foul.

Those four trips trips are part of the broader SEHSR initiative. The plan is for 4 new roundtrips between New York and North Carolina (3 terminating in Charlotte, 1 terminating in Raleigh) using the reactivated S-Line. The Carolinian would continue to run once a day along its existing route, and there would be 4 Piedmont round trips a day for a grand total of 8 round trips a day between Charlotte and Raleigh, and 6 round trips between New York and Raleigh (including the Silver Star, which as previously mentioned, would be rerouted over the S-Line).

These pictures are from Chapter 2 of the DC2RVA Draft Environmental Impact Statement. Here's current service between DC and Richmond. Red lines are the Virginia NE Regionals, green is Auto Train, purple is Carolinian, the blue lines in the center show the Palmetto and Silver Palm/Meteor. The top left corner shows the Roanoke NE Regional, Crescent and Cardinal. The map is slightly outdated as it doesn't show the 2nd round trip to Norfolk that started last year, but you get the point. 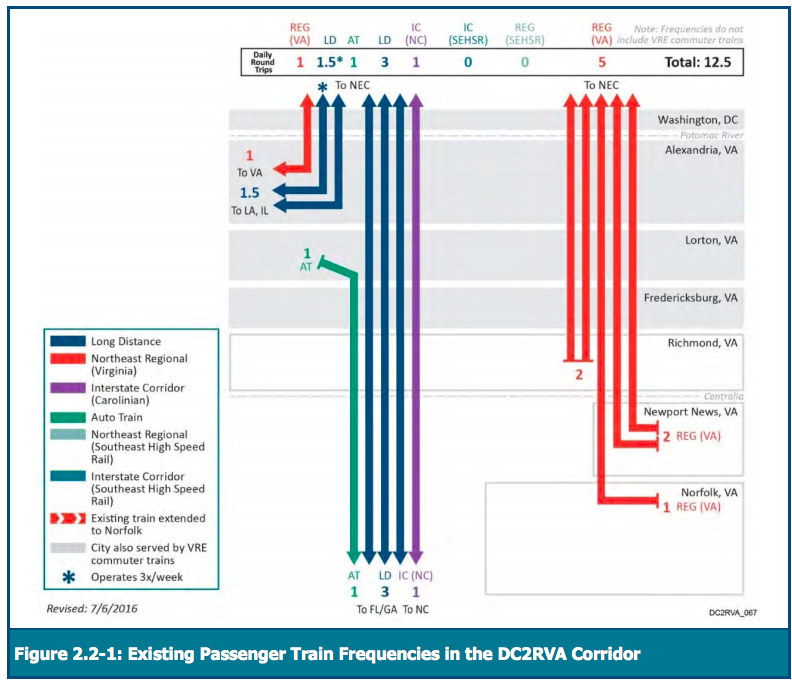 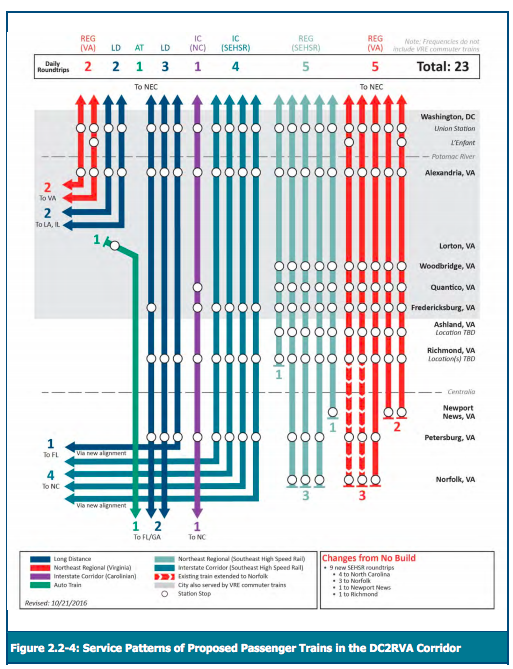 You can see the addition of 9 SEHSR trips - the 4 new North Carolina trips and 5 new Virginia Regionals. Also shown are proposals to add a 2nd Lynchburg/Roanoke Regional, make the Cardinal a daily train, and extend two Virginia Regionals from Richmond to Norfolk (this includes the 2nd trip to Norfolk added last year) - these are not part of SEHSR. The Richmond to Raleigh Final EIS (all compiled in a gigantic 1,100 page document) also talks about it a bit around pgs 19-23, 111-112, and 119-125.

The plan Virginia laid out earlier this year for expanded NE Regional service by 2030 is its very incremental implementation of SEHSR.

Of course funding is the big question mark for SEHSR. Aside from the partial RF&P right-of-way purchased by Virginia, and the sidings scattered here and there, I don't think any of the SEHSR-specific infrastructure is funded yet. The Final EIS for both the DC2RVA and Raleigh-Richmond segments are fairly silent in this regard. In terms of operating costs, the new Virginia regionals would be funded by VA, and I assume the four North Carolina round trips would be funded by North Carolina just like the Carolinian. Again barring the specific improvements Virginia has targeted for 2030, I don't think there's a timeline for anything SEHSR either. Better hope VA and NC can claw something from infrastructure week.

There's also no concrete details in the FEIS on how these trains would fit on the NEC, but I would assume most or all of them will just be extensions of Regionals ending at Washington. I don't know to what extent NEC schedules will change over the next decade or two, but just looking at the existing timetable, in a scenario where all the infrastructure and slots are there to allow it, and you're willing to sacrifice some evenness in the schedule, you could extend ten round trips south from WAS and have most of them arrive/depart Charlotte/Raleigh/Richmond/Newport News/Norfolk at decent daylight times (with a few 3/4 AM departures)

I read about this a while back and I am 96% sure that NC pays 100% of the state-supported cost of the Carolinian. Keep in mind that cost is low in normal times as the train pays 95%(ish) of its costs. The article linked below suggests (but does not confirm) that NC is the only contributor to the train.

by David Benton
Sun May 17, 2020 8:43 pm
Amtrak's "small surplus" would include the state subsidy as revenue ??
Moderator worldwide railfan , Rail travel & trip reports
The only train trips I regret are the ones I didn't take.

by Bob Roberts
Tue May 26, 2020 6:03 pm
NCDOT has just received an $80 million grant to purchase 6 new locomotives and 13 coaches. The grant says it will " facilitate a fourth daily round trip between Raleigh, Charlotte, and points between"

This bolsters a similar ($77 million) grant from last year to purchase new equipment. The heritage fleet's days are numbered -- I'll really miss them.

by bdawe
Tue May 26, 2020 7:17 pm
If there was ever a place to order DMUs it would be NCDOT - short trains, state owned track, lots of little curves, independent fleet.

by njtmnrrbuff
Tue May 26, 2020 7:53 pm
When "museum pieces" on mainline rails last several decades, that's great but when their time comes to be retired, then that must happen. Any type of new equipment will be welcoming to the Piedmont operations. Hopefully that number of 13 coaches is enough capacity for the Piedmont trains. If the replacement coaches will be only able to operate behind a locomotive, I wonder if NCDOT is considering ordering cab control cars that have coach seating? DMUs could also work for a route like the Piedmont.

by Pensyfan19
Tue May 26, 2020 10:12 pm
I bet Siemens Chargers and Venture coaches. That seems to be the only thing the Amtrak State corridors and commuter rail lines are ordering nowadays.

However, I did read about a proposal a while ago about having hydrogen-powered trainsets for the same route, so whoever proposed that might be able to convince the State to order hydrogen-powered DMUs. (This is just a guess.)

by eolesen
Wed May 27, 2020 3:01 am
The Charger is really built for high speed and distance running, but it's possibly too much locomotive for commuter service.

I'd say it's more possible to see single level cars like the Venture on lower density / longer distance commuter services than a Charger.

bdawe wrote: ↑Tue May 26, 2020 7:17 pm If there was ever a place to order DMUs it would be NCDOT - short trains, state owned track, lots of little curves, independent fleet.

by njtmnrrbuff
Wed May 27, 2020 9:22 am
VIA Rail is replacing the LRCs and HEP coaches with Siemens push pull trainsets with a cab car on one end and a Siemens Viaggio Charger Locomotive on the other. Maybe NCDOT will look into doing this.