bostontrainguy wrote: ↑Tue Jun 02, 2020 10:54 am I always thought the Japanese had the right idea with their 287 Series trains. By placing the engineers in an elevated position above the floor level they allowed passage between sets with diaphragms hidden behind opening doors to connect sets together. Really great idea.


The Danish IC3 series of MUs are also designed to be easily coupled together into longer trainsets. Unlike the JR sets, they do it without adding any extra height (the engineers' control panel and chair are all on a folding door). Apparently, Amtrak tested a set of IC3's on a couple of corridor routes back in the day.

Also unlike the JR sets, they are possibly the ugliest rail vehicles ever to exist. 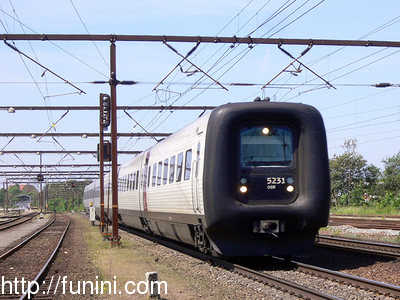 by Tadman
Wed Jun 03, 2020 6:46 am
I've spent some time on them in Denmark around 1996. I don't remember them that well, other than in-person the looks weren't that bad and the experience was not bad either. They tested here around the time of Talgo, X2000, and ICE.
Dig the new rr.net Instagram account: @railroad_dot_net

by gokeefe
Wed Jun 03, 2020 9:04 pm
Those trainsets would have terrible aerodynamics.

by David Benton
Thu Jun 04, 2020 2:39 am
they would rarely exceed 100 mph . Designed for rapid acceleration , and fast joining / seperating. Ideal for short routes , with multiple splits / branches. ?probably more applicable to Dmu routes than Emu routes.
Does anyone know of an operation where EMU's and DMU's operate together Mu'ed ??
Moderator worldwide railfan , Rail travel & trip reports
The only train trips I regret are the ones I didn't take.

by Tadman
Thu Jun 04, 2020 7:44 am
I'm not aware of any but Brush/Wabtec is making the 769 class of Diesel/Electric EDMU based on their experience with the "British FL9", the 73 class. I'm not sure how high hopes I have, as the 73 was and continues to be a dog. It had a 600hp prime mover, now the 73/9 mods have a 1600hp prime mover from MTU. They need two to haul eight passenger cars on schedule over very hilly terrain, where the 67-class runs solo (Think F59 in euro body). They're also frequently out of service and the 67 pinch hits often.

And I agree with David, the point of the IC Flexliners was not speed, it was flexibility. They probably spend most of their time below 79mph. But they can couple at speeds under something like 30mph, which the Grannies at FRA tell us is totally unsafe because they dreamed that up in the Nightmare Room so don't even ask. It would be very useful in combining a Keystone into a regional or a Shuttle with a regional if the need were there. They did coupe DMU with EMU but I'm not aware that the diesel ran.
Dig the new rr.net Instagram account: @railroad_dot_net

by David Benton
Fri Jun 05, 2020 4:31 am
The class 73's were only dogs if you think they were ever intended to operate as a diesel line haul.
They hauled the Gatwick expresses for years ( I used to watch them pass at speed enviously while waiting for my old emu commute home), and finally , are still in service despite been built from 1962 on.
Moderator worldwide railfan , Rail travel & trip reports
The only train trips I regret are the ones I didn't take.

by David Benton
Sat Jun 06, 2020 8:11 pm
Definitely , the diesel motor was only intended for yard work and work trains.
Moderator worldwide railfan , Rail travel & trip reports
The only train trips I regret are the ones I didn't take.

It seems the DM30s were the worst of recent dual modes built. Even one was rebuilt to a DE30.
Since my friend continues to chain smoke nonstop, she is probably an Alco.