cnj1524 wrote:the atlas trucks are from a trainline GP40

thanks, did you use the athearn worm gears or atlas?
My youtube videos

by timberley
Wed Oct 24, 2012 12:12 pm
I recently got to work improving my Intermountain HO SD40-2W. IM did a reasonably nice job on this locomotive, but there were some definite areas for improvement. I made several subtle but important changes that make the model closer to the prototype 5250. This included painting the front handrails red and white (same treatment on the rear), as these were black on the model, and painting the ditch light casings red (they're still pretty dull, but I haven't yet taken on the task of replacing them with better ones). I also painted the white grabs on the plow, and added the stripe and red paint over the blower duct that IM left off on the first run. Finally, I corrected the windshield wipers, which intermountain had backwards (they had the larger wipers on the centre window, and the smaller ones on the outside windshield). I reversed them, but had to replace one of the wipers as it broke in the process!

by Steve F45
Wed Oct 24, 2012 3:28 pm
If your going to replace the ditchlights, this guy makes replacements. His parts are geared towards the canadian models.
Miniatures by Eric.
http://www.miniaturesbyeric.com/itm00127.htm
My youtube videos

by acelaphillies
Sat Sep 14, 2013 9:25 am
Let's get this tread rolling again! In it's glory days this was an AWESOME thread. Anybody with me?

I just recently a River Point Station Ford F-250 pickup truck that I decaled for an Amtrak MOW pickup.

I started out with a River Point Station F-250 in MOW white. I put gloss coat on the model, then I applied custom decals that I made from the Micro-Mark inkjet decal paper. I then applied a satin finish and added license plates printed on copy paper.

For the decals I made the Amtrak logo, the truck number, as well as lettering that reads:

This is found on many Amtrak MOW vehicles in the Northeast.


I was happy with the decal paper, except that it seems to be a little thicker than Microscale. Unfortunately, on such a small model the edges stand out a little. I may add some more clearcoat to try to hide this. 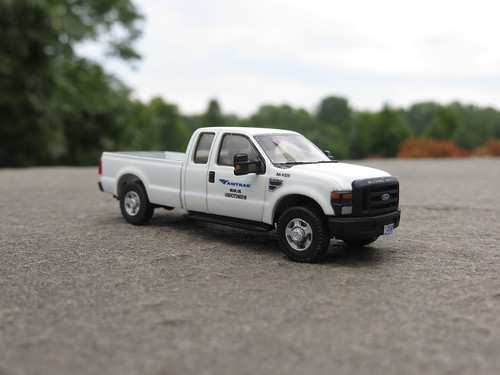 I hope you guys enjoy and maybe try this for yourselves. If anyone wants the artwork I would gladly send you the publisher file.
Check out my railfanning videos on YouTube!

by scharnhorst
Sun Oct 27, 2013 10:27 am
I did up and custom painted a Conrail ALCO RS-3M using Stacks off of an EMD SW9/1200 and 2 36" fans from a GP9 the unit is an older N Scale KATO RS-3 made in the late 80's early 90's.
You do not have the required permissions to view the files attached to this post.
no matter the weather or the country I'll still be trackside!

by timberley
Tue Feb 04, 2014 9:33 am
Let's see if we can once again breathe some life into this thread. Acelaphillies is right, this has been an awesome thread when it was really moving!

I've been up to a LOT since last posting here, but I'll just put up a couple of highlights.

Last year, I finally got around to updating and further detailing my model of VIA 6400 (post-rebuild, pre-wreck), including ditch lights, marker lights, mirrors, bug shields, and some other little tweaks. I think I posted a photo of this unit in its earlier stages back a few years ago on this thread, but now I think it's finally almost "complete". 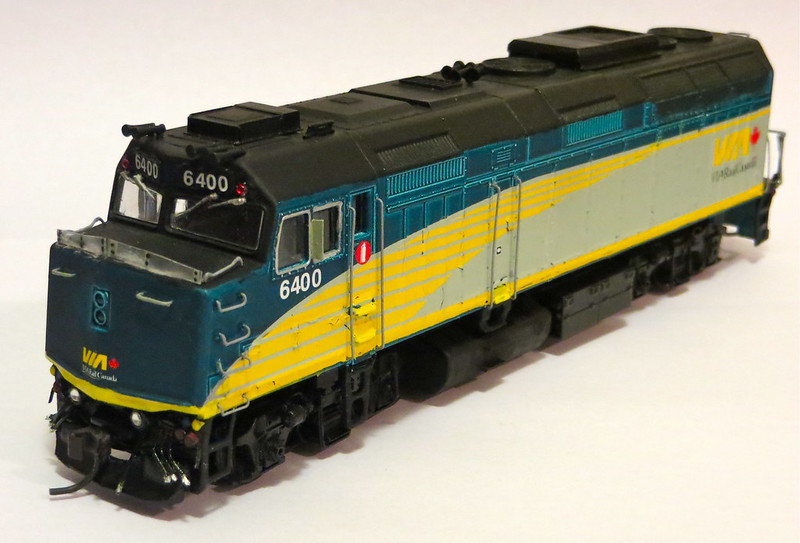 My pride and joy of last year was my VIA Panorama car, which I kitbashed from a Rapido coach, a Bachmann Ultradome, and a lot of other bits and pieces (many scratchbuilt). It was a LOT of work, and I was quite happy with the finished product. Painting it was the most tedious part of the whole thing. That blotchy green pattern was all masked by hand and then sprayed. Yeah, that was fun

I also had fun with painting a few things. First up is a Walthers ex-MILW VIA Sceneramic dome, heavily weathered as a "coach yard queen" at the end of her service life. The varied tints in the dome windows is deliberate, and was done to match the very common appearance of these cars later in their lives (thanks to different tinting materials being used). 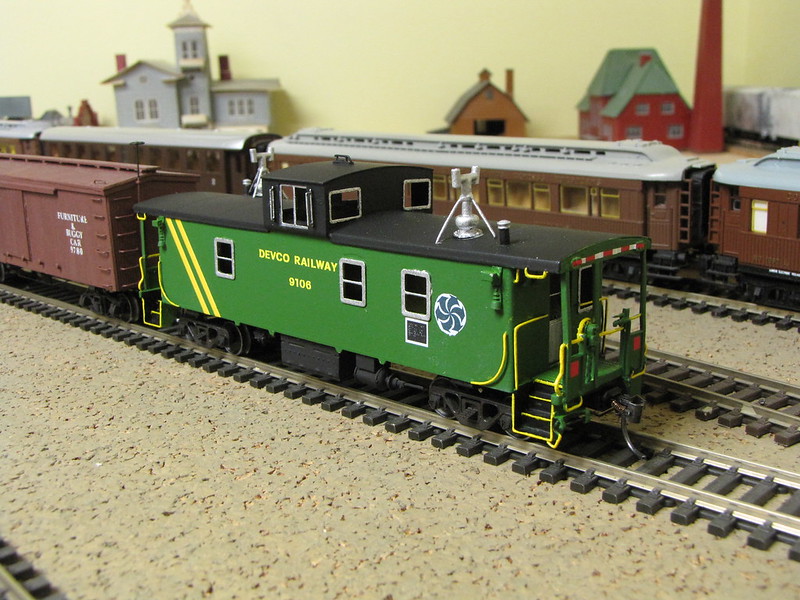 Alright, that gets us through some major work from last year. Now let's get to some more properly "recent" projects. First up, here's a trio of VIA domes on my "workbench" (which at this particular moment happened to be the kitchen table

). From front to back, we see Rapido Park Car "Evangeline Park", followed by "Kootenay Park" and a Walthers Skyline (#8512). The Parks have both received modern decals (new VIA logos, flags, Canada wordmark, emergency access labels on windows and roof), and blanked windows as appropriate. They're also in the process of being more thoroughly converted to head-end power. The Skyline has had a lot of work done to it, including exterior details and some new decals, end and underbody HEP detailing, addition of window blinds, blanked windows, and an entirely reconfigured (and painted) interior to better match the prototype. I'll post some good photos of the Skyline itself soon.

And finally, here's a Custom Finishing Trackmobile I'm working on. It's an all-metal (unpowered) kit, and has come together quite well despite needing a lot of work (so much filing!!). I've painted it in safety yellow and added some CN decals and extra safety striping. It's not really specific to any particular prototype. Still needs a flat coat, final assembly, windows, windshield wipers, a beacon and sandpipes. Then she'll be done.

by acelaphillies
Wed Feb 05, 2014 9:34 pm
Great stuff Timberley! That VIA stuff looks real nice, as well as the trackmobile! I hope that my projects come out that nice. Here are some of my latest projects: NJT P40, Island Modelworks Mulilevels, and a Walthers PRR Interlocking. Come on guys, don't be afraid to share your projects!

Here are some pictures from a few days ago right before the decals started going on: 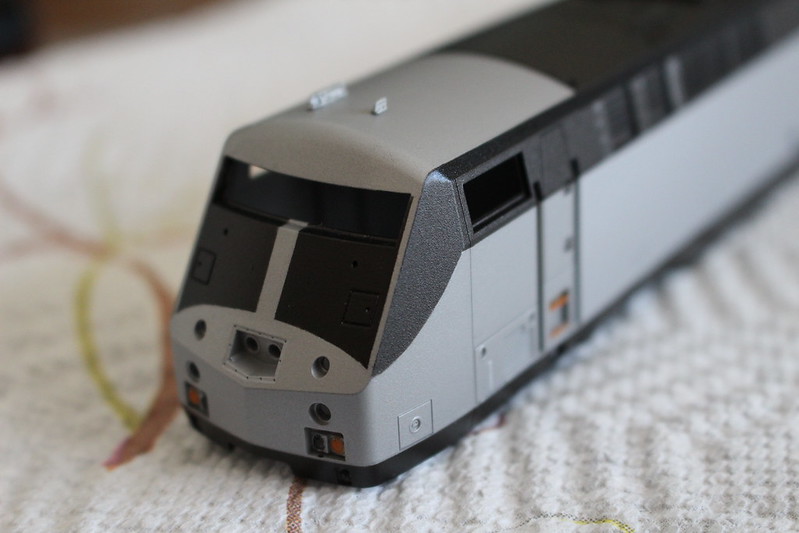 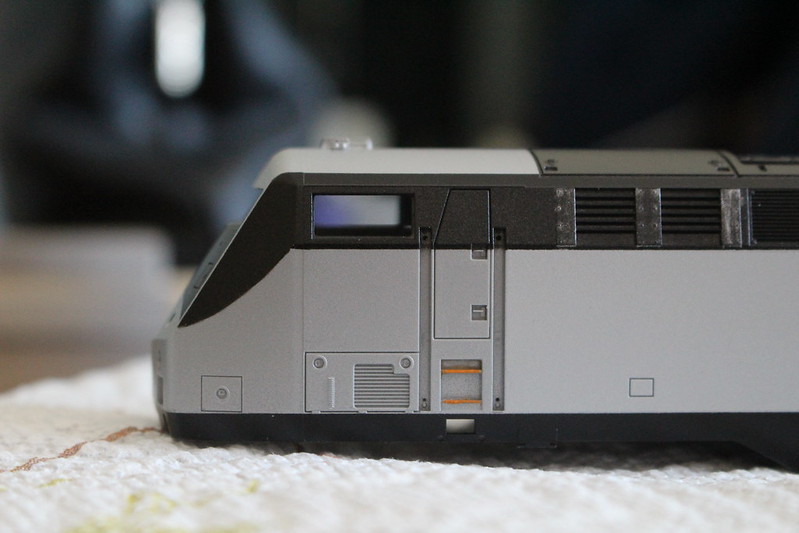 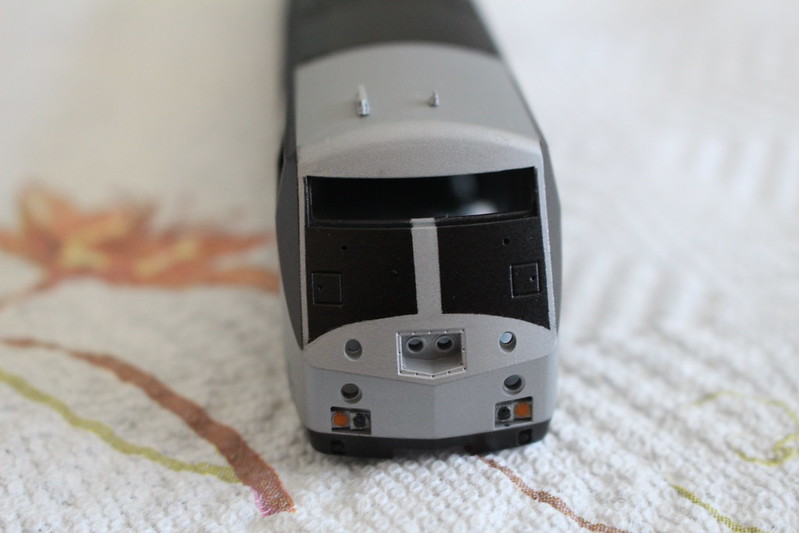 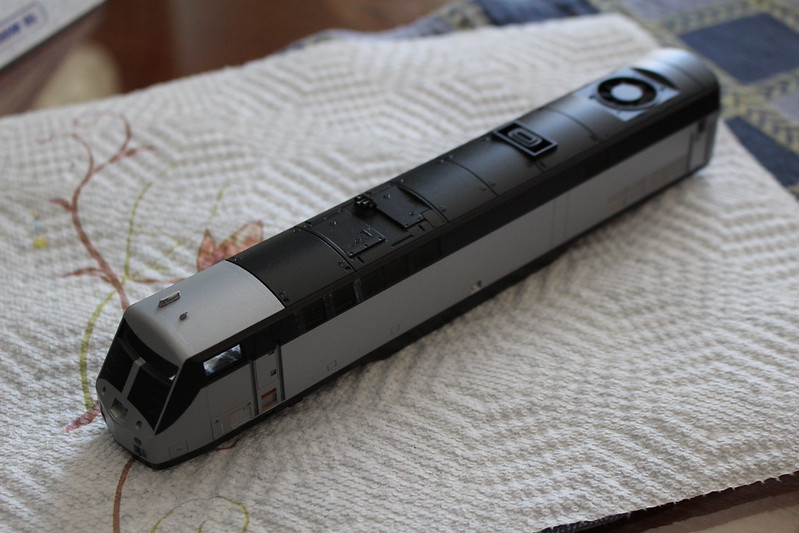 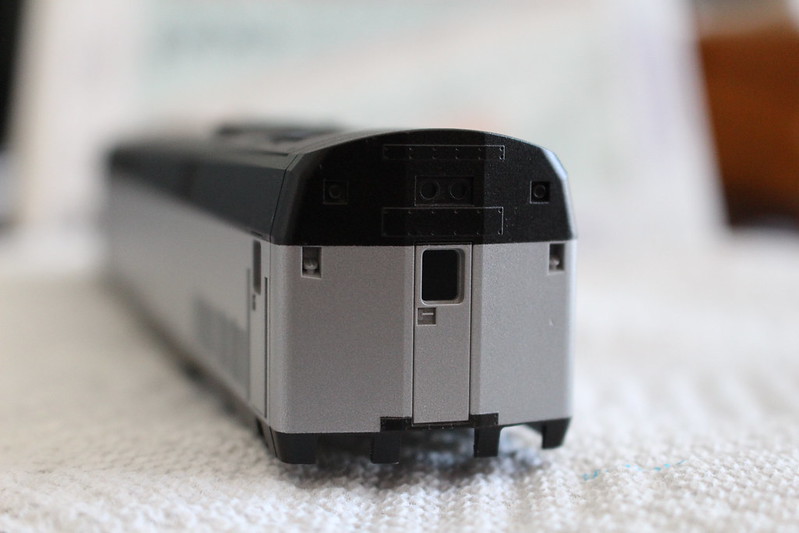 Here is the most recent picture: 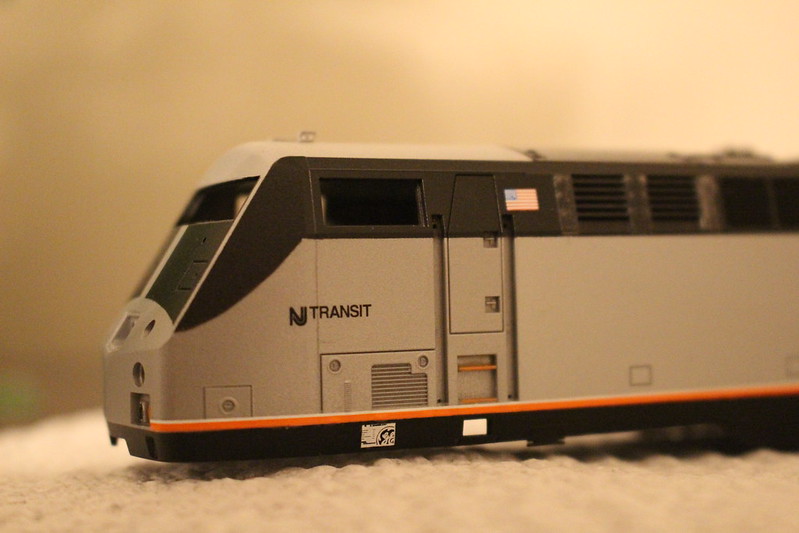 Here are my three Multilevels. 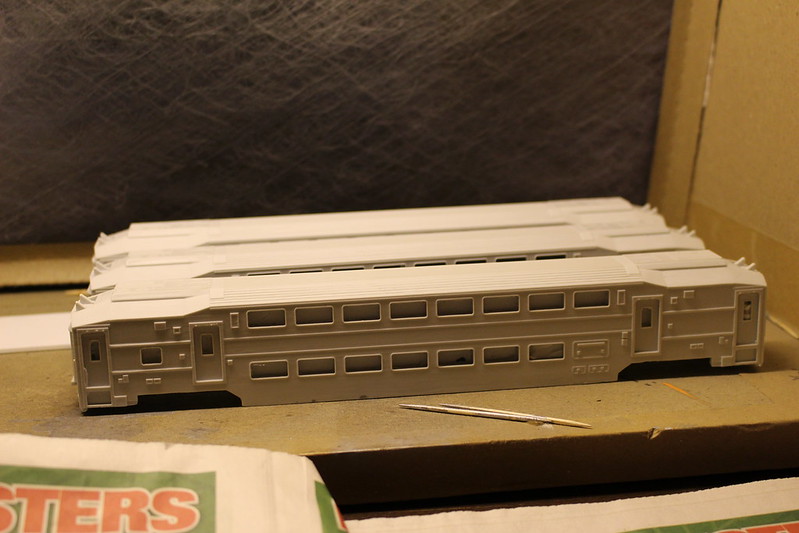 As you can see in this picture, I have begun removing the flash. 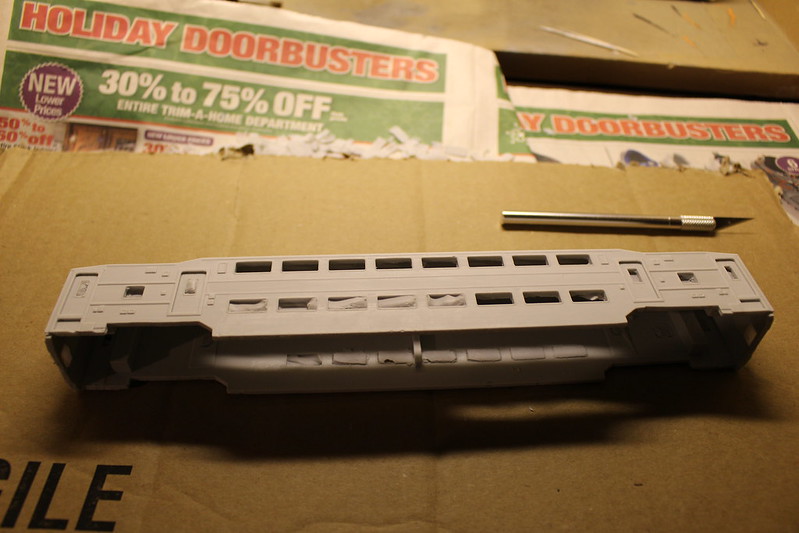 A NJT P40 and Multilevels? You guessed it -- I'm working on an ACES train!

Last, but not least, here is my interlocking tower: 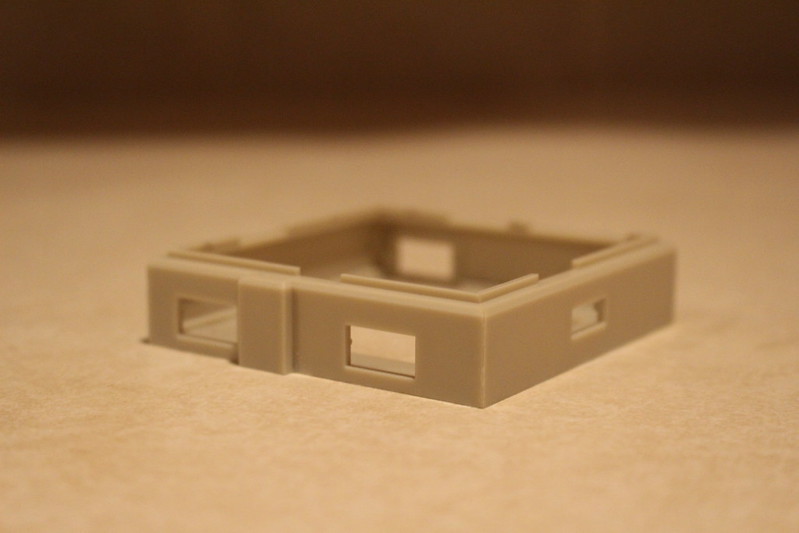 Not much right now, but every good building starts with a good foundation!

I plan to modify it a little to represent an old PRR interlocking tower that is now used as a MOW base for Amtrak crews along the NEC. Real-life examples of this can be found in today's MORRIS or GRUNDY interlocking towers.

If anyone is interested, here is the kit before I did anything to it: 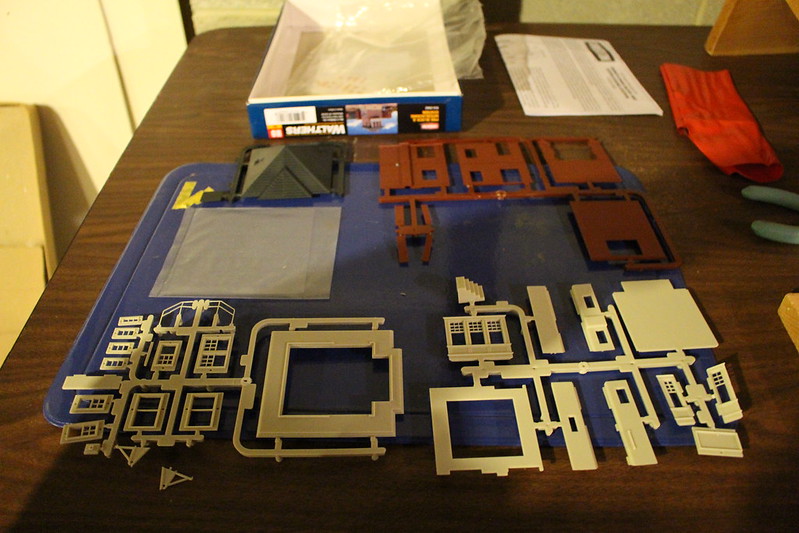 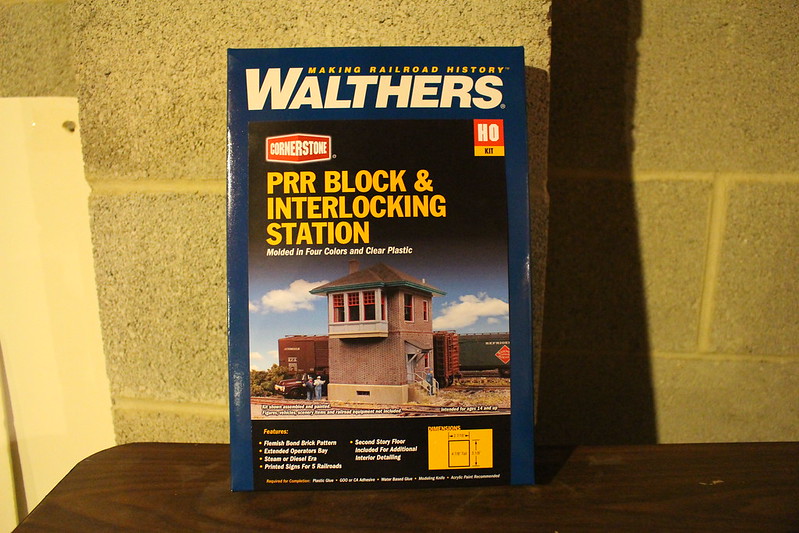 And here is the decal sheet included with it: 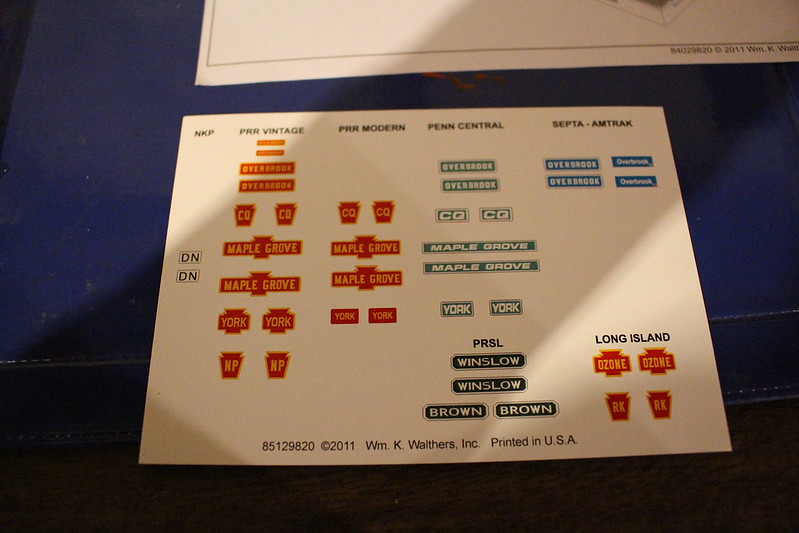 I hope you enjoyed looking! Let's see what everyone else has on his workbench!

by ApproachMedium
Thu Feb 06, 2014 1:44 am
Daniel, want another P40 to do? lol I have one that someone did a good paint job on the body but it was never decaled and never assembled. I want it gone. lol
No good deed goes unpunished.

ApproachMedium wrote:Daniel, want another P40 to do? lol I have one that someone did a good paint job on the body but it was never decaled and never assembled. I want it gone. lol

Approach, I really appreciate the offer! However, I think 1 P40 is all that I need. Maybe someone else could use it? Or you could sell it on ebay, I'm sure you would have buyers.
Check out my railfanning videos on YouTube!

by ApproachMedium
Thu Feb 06, 2014 1:02 pm
I put it up for sale on here. I only want $20 if that for it. feebay is too cost prohibitive anymore.
No good deed goes unpunished.