LV 511, stored for many years at RMDI in Pittston, PA (at the former LV coxton yard) is scrapped. The unit was in bad shape..

Thanks to Travis Prevost for keeping an eye on the status of LV 511, and confirming when she was finally scrapped.


3.) the Third update for October 2009, LV "Tool Car" 94141 exists in Ithaca NY. with the small display at the LVRR Ithaca station. (was once the "Station Resturant", is now (in 2009) a Chemung Canal Bank branch
Faint "Lehigh Valley" lettering is visible across the top, under the paint, and a road number is faintly visible on both sides..(you can see the raised outline of the old lettering under the newer green paint..the lettering was simply painted over, but thankfully not removed before painting..)
It is LV car 94140...
looking through "Lehigh Valley Railroad Passenger Cars, photo and diagram book No.1 " LV 94140 ended its LV career as a "service car"..its a coach converted to work train service at Sayre..
94140 began life as an 800 or 900 series coach, built by Pullman in 1914.
I dont yet know its original number..


5.)
a new LV wood caboose has been discovered!

a few weeks ago Roger Kirkpatrick sent me this link:

showing a mystery LV caboose in Lee, Massachusetts.
I did a little digging, and discovered its located at the "Sullivan Station Restaurant"
I emailed the restaurant, asking if they knew the Conrail number, or any other numbers..
they wrote back and said their caboose was Conrail 18679.
which according to: http://crcaboose.railfan.net/renum.htm
makes it LV 95004!

1 Big news! one of the parade float models built at the Sayre shops has been FOUND! in California:
http://forums.railfan.net/forums.cgi?bo ... 1287897981
I assumed it was steel, but it might be made of wood.
(although it looks like metal..)
Dominic, the owner, never did respond with his plans for it..
but its continued survival at this point is probably quite secure.

3. LV U23B number 508, who in recent years has been operating as Lafarge 2784 in Alliance Ohio, has been sold to Larry's Truck & Electric, and is now lettered as LTEX 2784, and was seen in Conway, PA on January 18, 2011. LTEX could be a bad sign..a unit like 508 could be parts fodder, then scrapped! although Larry does also re-sell, re-power and lease a lot of units as well..so hopefully this is just another stage in 508's nomadic wanderings..We will have to keep an eye on her.

4. LV Alco C420 No. 414, for many years used on the SRNJ, and repainted into her original Yellowjacket colors, has been sold to the Delaware Lackawanna! Being complete and in good (I assume) condition, hopefully it is most likely the DL plans to operate her, (lets not consider the alternative! yet..) and she can return to hauling freight with her sister C420 LV 405. (now DL 310)

It's safe and will be returned to operation..

All three units are enroute to Scranton.

by TB Diamond
Sun Jan 23, 2011 11:38 am
On 25 September 2010 former Lehigh Valley Railroad GE U23B No. 509, last identity Pennsy Supply 2785, was sitting derelict on a stub track next to the NS on property owned by Millard Quarry near Annville, PA. The unit is in bad shape with rust showing through the paint and broken windows. Quarry personnel related that there are no plans to ever restore the unit to service.

TB Diamond wrote:On 25 September 2010 former Lehigh Valley Railroad GE U23B No. 509, last identity Pennsy Supply 2785, was sitting derelict on a stub track next to the former PRR main on property owned by Millard Quarry near Annville, PA. The unit is in bad shape with rust showing through the paint and broken windows. Quarry personnel related that there are no plans to ever restore the unit to service.

This unit must be considered very endangered.

Perhaps not the PRR. This looks like a derelict GE at Millards quarry along the Norfolk Southern's former Reading Co. Lebanon Valley Branch:
http://tinyurl.com/MillardsQuarry

by RDGTRANSMUSEUM
Mon Jan 24, 2011 9:06 am
looks like a good parts supply engine for them.
visit us at : readingtransportationmuseum.org

glennk419 wrote:414 was spotted in Pavonia yard on Wenesday, January 19 with a couple other gems.

All three units are enroute to Scranton.

The 414 and Co has left Pavonia yard last night (1-25-2011) I hope someone gets photos of her at Allentown yard.and will get to run on its Ex LV home rails on the way from Allentown to Wilkes Barre.
I for one spent time working on and riding in her. I wish her a great life on the D-L. South Jersey will miss the LV -SRNJ 414

56-57 wrote:I'd be willing to be the 414 & Co. ride the Lackawanna main over the Poconos, as the DL and NS interchange at Slateford. The bridging of DL cars over the R&N stopped nearly 10 years ago.

I believe you are correct. The move was originally posted as NS to Portland with direct interchange to DL so they will be coming in from the east.
Glenn

by Nova55
Tue Jan 25, 2011 2:25 pm
You can scratch the LV Capmoore off the list to. Atleast one of her spare gasket kits went to good use on the Cornell last night..

TB Diamond wrote:On 25 September 2010 former Lehigh Valley Railroad GE U23B No. 509, last identity Pennsy Supply 2785, was sitting derelict on a stub track next to the NS on property owned by Millard Quarry near Annville, PA. The unit is in bad shape with rust showing through the paint and broken windows. Quarry personnel related that there are no plans to ever restore the unit to service.

This unit must be considered very endangered.

I shot this unit back in April 2010. She doesn't rest at the main quarry where the other units do, but further east beside CP MIllards. I was unaware of her Lehigh Valley heritage. 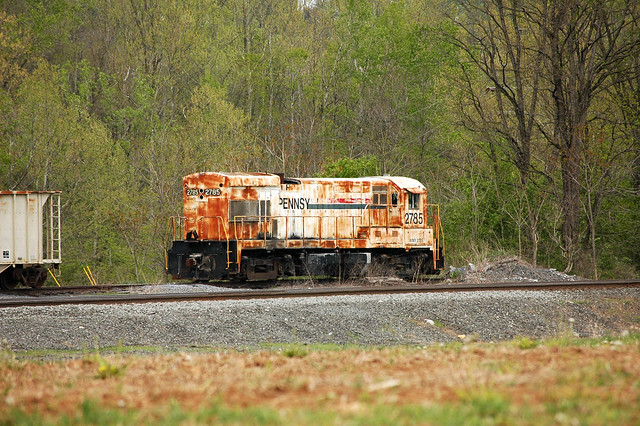 by lvrr325
Mon Feb 21, 2011 6:45 pm
I have a lead that another LV U23B is going to be scrapped in Texas, but no details on which one yet. Apparently it's in bad shape, in need of wheels and not operable, and worth more as parts. That might make it the 2788, which I think had been sold last to a shortline down there somewhere and was sitting because the wheels were thin.