by Otto Vondrak
Sun Mar 10, 2013 7:39 pm
I need some details about Sayre Shop... When was it built, how large was it, when was it torn down, etc. etc. i've searched and couldnt quite find enough resources. Any help would be appreciated.

Per information in David Archer's book--ground was broken July 1903 and opened in 1904. The entire complex, which
consisted of a locomotive erecting hall, blacksmith shop, machine and storage shops housed in one building covering 6.3 acres.
The Sayre shop was one of the few in the United States that was equipped with a traveling crane, which was adopted by American
roads in 1900. When opened, the new complex was capable of turning out one new or rebuilt steam locomotive daily.

As noted, I gathered this info from Dave Archer's book, Lehigh Valley Railroad.

Hope this helps you a bit!

Are there any buildings still standing? GE Railcar once had a shop there, I didn't know if they were using any of the old facility or just occupying the land.

Looking compass North from the Packer Avenue bridge, there is a new building where
the original shops were. I believe to the right is a transload facility of some kind.

This building is still extant, but I forget what purpose this particular one served. We are looking compass East from Lehigh Ave.

That's all I could really find at this point. I had to post via a direct link as the pixels were too large.

by TB Diamond
Mon Mar 11, 2013 6:01 pm
The building in the second photo was referred to as the Assembly Hall. Went inside once many years ago and noted a stage on the east end of the structure (ETT direction).
You can't go home again- Thomas Wolfe

by scottychaos
Mon Mar 11, 2013 7:55 pm
The main, largest, building was called "The Big Shops" by the locals..
It was said to be the largest building in the world when it opened in 1904!
LV built steam locos there until 1925, then it became the LV's main (and eventually only) locomotive maintenance shop,
used right up until the end of the LV in 1976.
Conrail never used it.
Demolition began in November 1987 and was complete by the summer of '88.

Photos of it being torn down:

I have more photos, including the interior, if anyone is interested..

The building was 360 feet wide by 747 feet long.
(I have poor scans of some original drawings, just good enough to show some basic detail)

The entire complex as a whole, all the buildings together, was "The Sayre Shops"..
Today only five original LV structures still stand in the Sayre yard,
The "Hammer Shop" (Later the Assembly hall)
The "Freight car repair shop"
The "Store house"
The "Mill"
(building names from the map in the Archer book)
and a 5th building that isn't on the 1904 map in the Archer book..not sure what it was, but it was a LV building.

The large blue building that says "GE Railcar" on it isn't a LV building, that was built by GE in the 1980's..

Four companys use the Sayre yard today:
Norfolk Southern still owns and uses the mainline tracks along the edge of the yard, some of the yard tracks, and the tracks approaching the yard from all three directions.
(Four rail lines once radiated out from the Sayre yard, today it's three.)
GE Railcar uses the largest part of the yard, they repair freight cars, and use a lot of the yard for freight car storage as cars are rebuilt.
Rynone Industries uses the "Store House"..they make furniture, kitchen cabinets and such.
And the "Guthrie-1" medical helicopter has its base where the roundhouse once stood.

The "Valley" definitely had some great looking facilities!

charlie6017 wrote:That's the good stuff, Scot.......I remember seeing those shots of them tearing it down. If you can,
I would like to see the interior shots that you have.

The "Valley" definitely had some great looking facilities!

Thanks Charlie!
here is a collection of my photos from the mid-80's..
I was born in Sayre, grew up in Waverly, but I was only 7 years old in 1976, so I pretty much missed the LV and the EL, from a railfan perspective,
I was too young to pay attention during those last years..
I only have a few vague memories of "red locomotives" in Sayre..
But by the time I started taking railroad photos as a teenager in the 80's, the Sayre yard was still basically intact! so that was cool..
im glad I got to explore it all, even if I missed the LV itself. 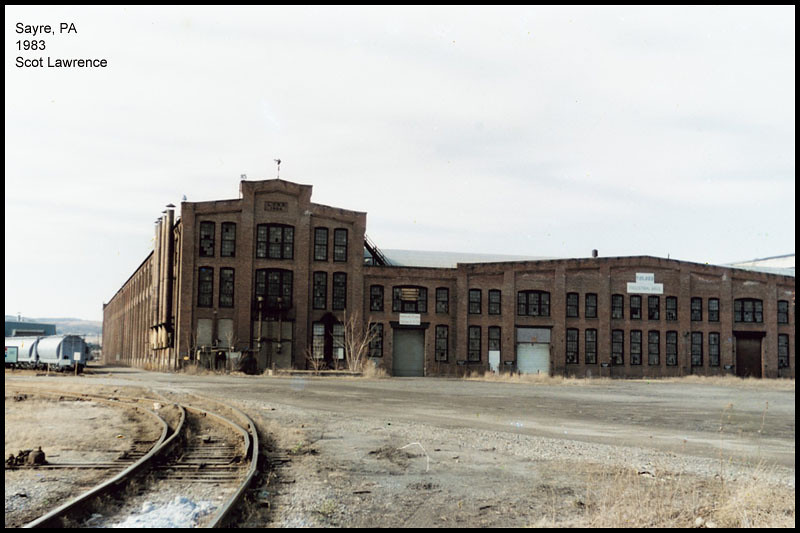 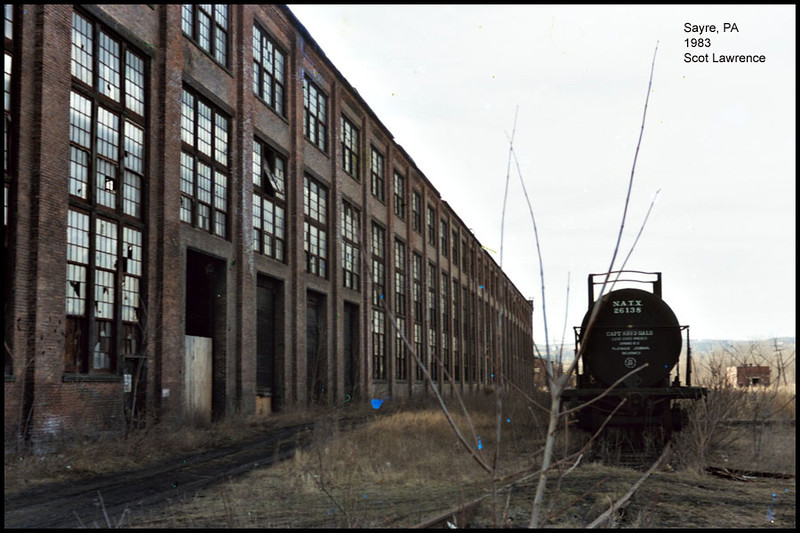 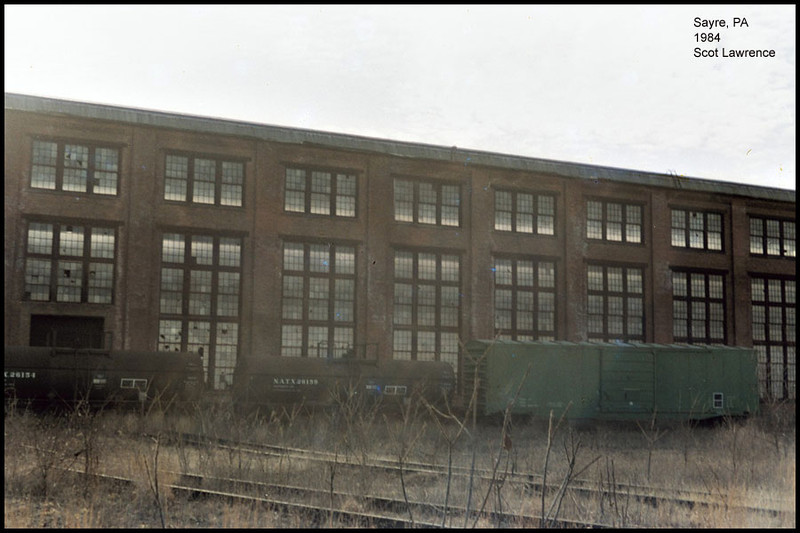 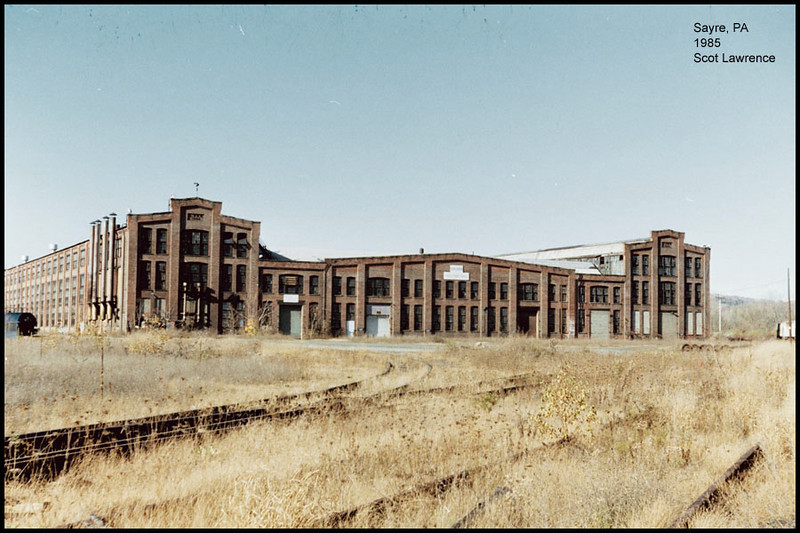 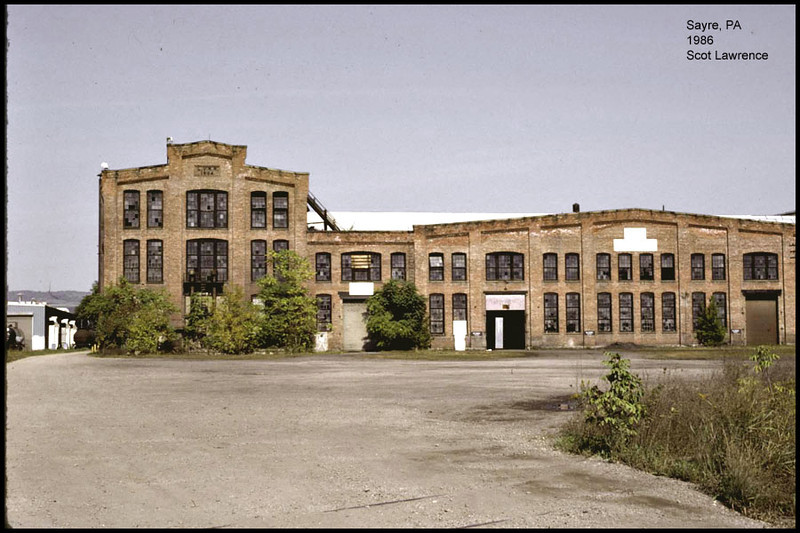 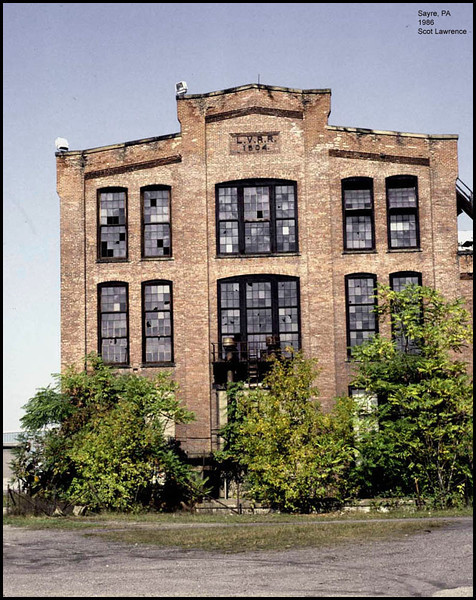 (this is the less commonly seen North Side) 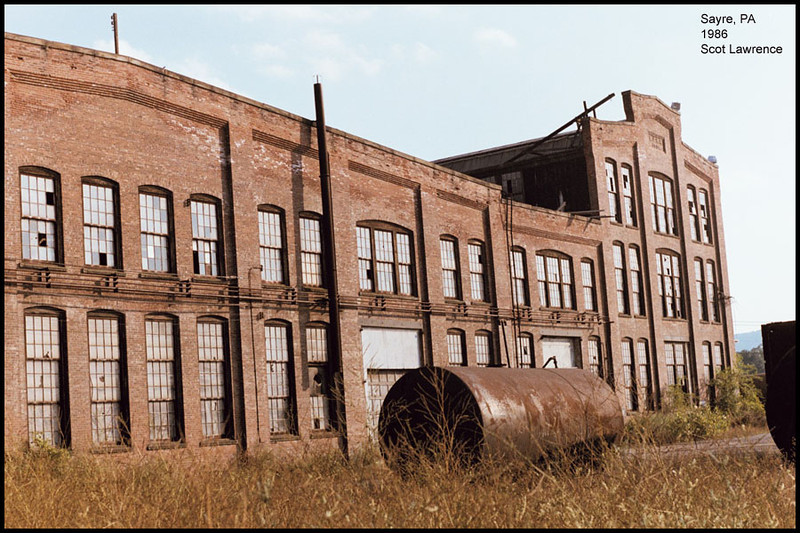 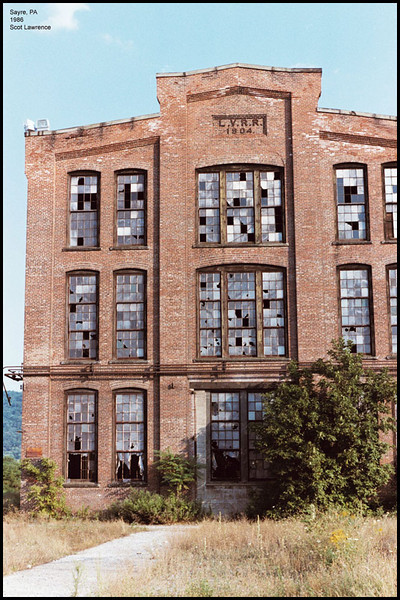 Anyone know Mike Franz from Sayre? that's him! 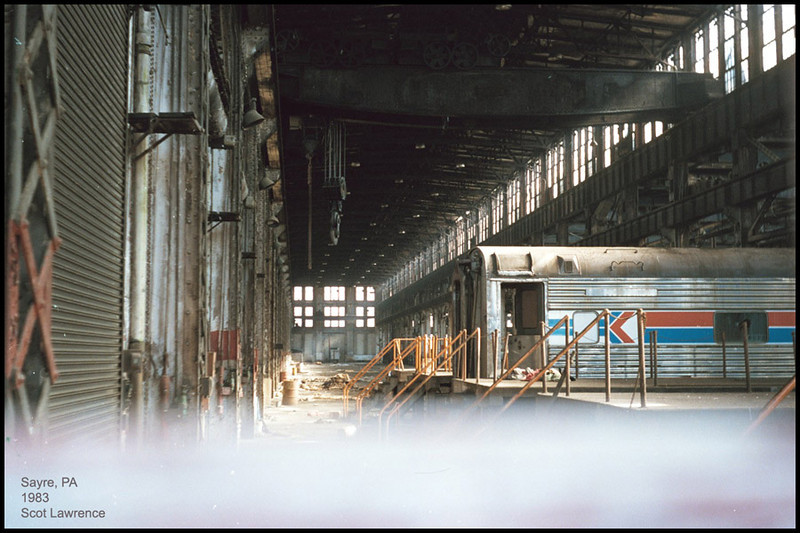 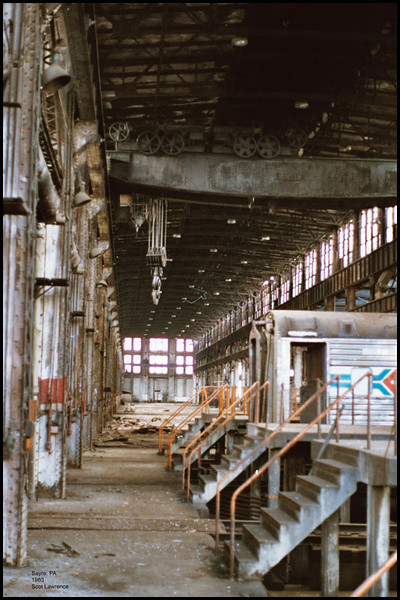 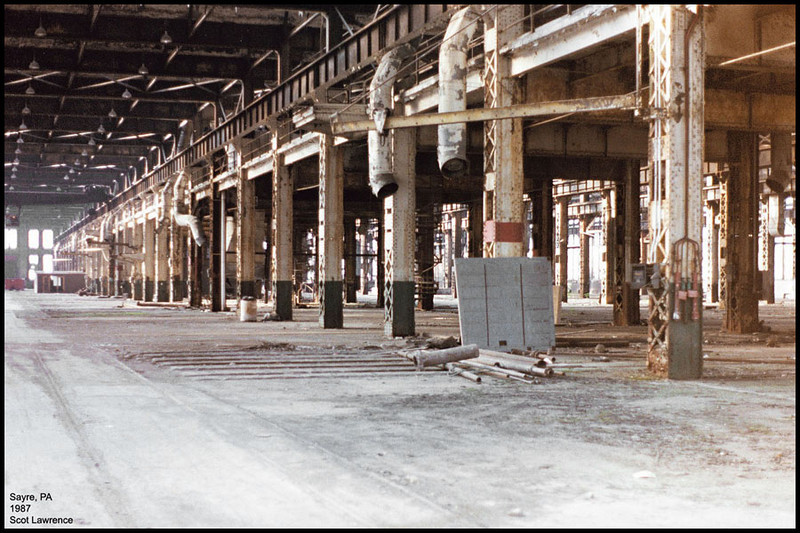 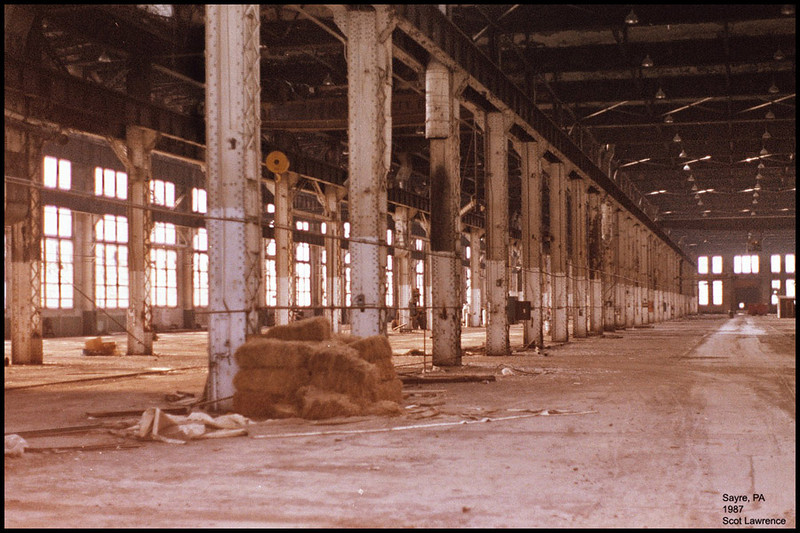 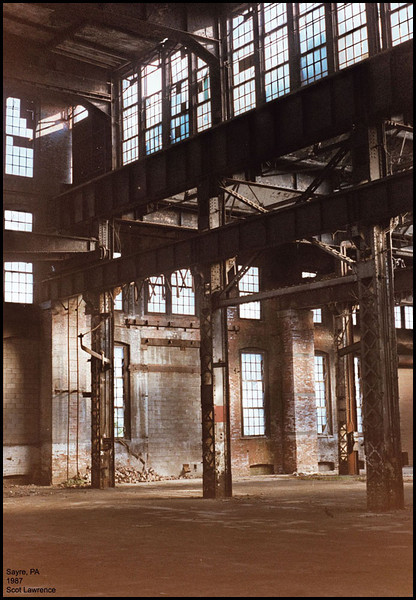 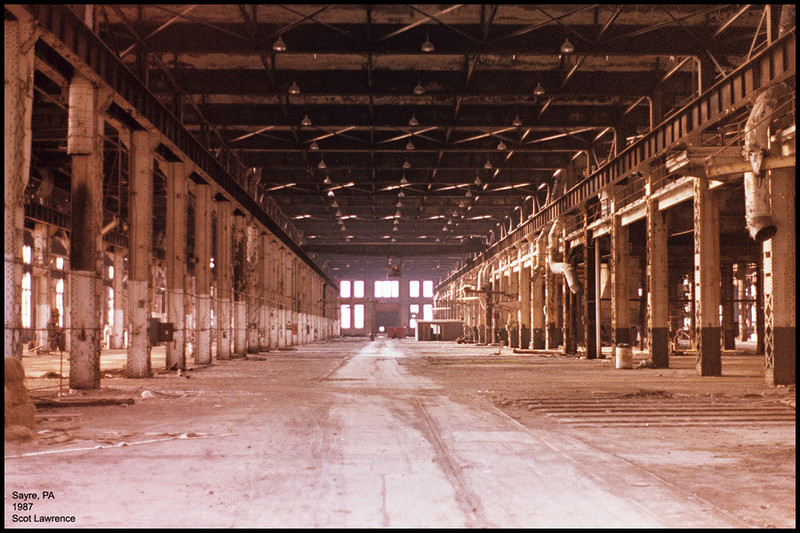 by lvrr325
Mon Mar 11, 2013 9:43 pm
Apparently someone was using the shop to overhaul passenger cars when those photos were taken? It doesn't look like it's in that bad of shape, although it wouldn't surprise me if it needed a roof.

lvrr325 wrote:Apparently someone was using the shop to overhaul passenger cars when those photos were taken? It doesn't look like it's in that bad of shape, although it wouldn't surprise me if it needed a roof.

I think the passenger car was just stored in the shop..
as far as I know, no one actually worked inside the building after 1976.
There was just the one Amtrak coach that hung around for a few years..
in some of my photos it's inside the building, in other photos it's outside..but it's the same car.
I never knew who owned it or why it was there..eventually it disappeared..

by charlie6017
Mon Mar 11, 2013 10:01 pm
Excellent photos! I'm glad you took advantage of the opportunity to get shots in and out
before everything was torn down. I was thinking the same thing as "lvrr325" about that
Amtrak car.

Seems surreal that such a huge complex that at one time was so busy and prosperous just
sat doing absolutely nothing for well over eleven years! It's sad, really! Just another chapter
of the Conrail era. It's just too bad so many surplus facilities such as these were deemed
redundant.

by TB Diamond
Wed Apr 10, 2013 10:34 pm
In the early 1980s an outfit by the name of Anbel was overhauling ex-Amtrak passenger cars in the former Lehigh Valley Railroad locomotive repair shop building. The cars, when finished, were painted a dark olive drab and were, I believe, lettered for a Mexican railroad. Cannot recall the reporting mark, however. Anbel utilized what appeared to be a Whitcomb 45t locomotive painted a light blue and numbered ANS 300. Photographed the loco moving cars in back of the shop on 12 October 1981. Anbel had ceased all activity by the spring of 1983.
You can't go home again- Thomas Wolfe