Topics relating to the operation of the P&W Railroad, which is a subsidiary of Genesee and Wyoming. Regional freight railroad based in Worcester and operating in Massachusetts, Rhode Island, Connecticut, and New York.
Official Website


They are to be used, originally to move heavy stone trains between New Haven to Long Island, but Metro-North declined them, as they are "too heavy" so they are still working on some issues. Now, they are assigned to move some ethanol loads between NECR-Willimantic, CT to Worcester. They have tested it once with 80 car loads, they passed with flying colors... Great pullers, too. As if theres no ethanol moves, they are primarily used as "road trains" between Worcester to Valley Falls. but cab signal issues have crept up on them.. They are still working on cab signal "bugs"..

CR
If Conductors are in charge, why are they promoted to be Engineer???

they also seem to do the job without any problems....I was speaking to someone at the Union Station the other day and he said they were doing

by DutchRailnut
Sun Sep 11, 2011 7:54 am
The E60's weight in at 389.500 Lbs same as SD60, but then the bridges are now 30 years older.
I believe MNCR is more concerened with Height of these units 16'2" as per EMD Specifications.
yes you can lower fans by few (maybe 4) inches and even horn , but your still at or exceeding the height of MNCR timetable which is 15' 6" with no exceptions.
If Conductors are in charge, why are they promoted to be Engineer???

by ebtmikado
Thu Apr 05, 2012 9:16 am
Here's a shot of GMTX 9059 with a westbound train from Worcester to Willimantic at Packer Pond last Friday: 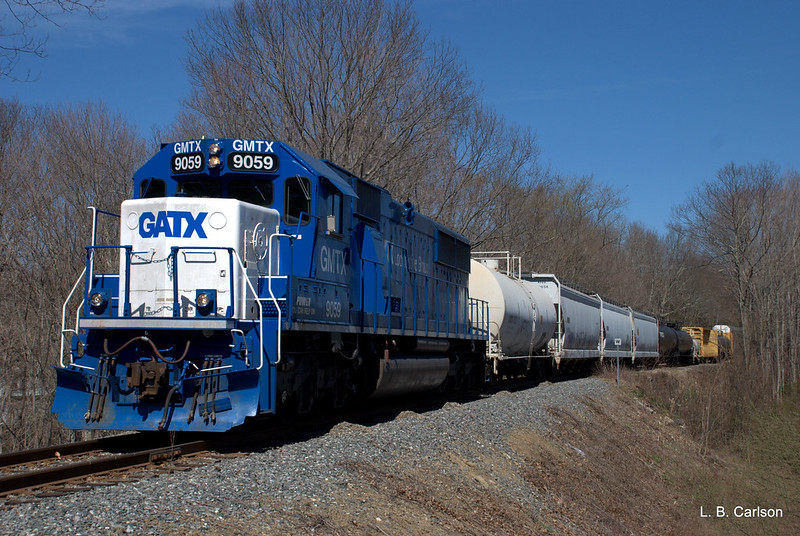 by MrGP10
Thu May 10, 2012 1:01 am
I posted a sighting on the NYAR forums CHFP? 2 GEs with 1 blue and white engine. I thought it was a geep I guess not. They came down on Tuesday night I didn't have a chance to see how many cars it had. The SD wasn't leading it was sandwiched in between the 2 GEs.

by jwhite07
Thu Jun 14, 2012 1:42 pm
The online newsletter Canadian Railway Observations is reporting that 43 GMTX SD60s, including 9014 and 9059, have been acquired by Canadian National. Their stint on P&W was rather short!

jwhite07 wrote:The online newsletter Canadian Railway Observations is reporting that 43 GMTX SD60s, including 9014 and 9059, have been acquired by Canadian National. Their stint on P&W was rather short!

Talk about wind out of your sails... I wonder, but how this would effect the lease agreement?

Here is the link if anyone is interested. It is a .pdf file


jwhite07 wrote:The online newsletter Canadian Railway Observations is reporting that 43 GMTX SD60s, including 9014 and 9059, have been acquired by Canadian National. Their stint on P&W was rather short!

by jwhite07
Mon Jun 18, 2012 10:15 am
Can't get much better clarification than that - unit by unit *and* the renumbering scheme! I for some reason cannot access CRO's website to look for a feedback link, but hopefully someone can correct them as well. Thank you for the information!

by DogBert
Fri Jul 20, 2012 5:44 pm
Last week I spotted one of these leading the stone train over hell gate. I'd imagine it has been properly equipped to lead on the corridor and thus will probably be around awhile.

Fits the pattern of the rest of the 'new' power that has come down to nyc - runs trailing for a few weeks and eventually gets equipped to lead.