Circling North America in '75 (with photos)

Circling North America in '75 (with photos)

by NS VIA FAN
Sat Feb 20, 2010 7:01 am
Back in October 1975 I set out on a rail adventure that would circle part of the North American Continent……..Essentially a straight shot across Canada, down the US West Coast, across the Southern States and back up the East Coast to Montreal.

I left home in eastern mainland Nova Scotia on a CN “Railiner” which connected to the Ocean Limited at Truro, NS for the overnight run into Montreal. 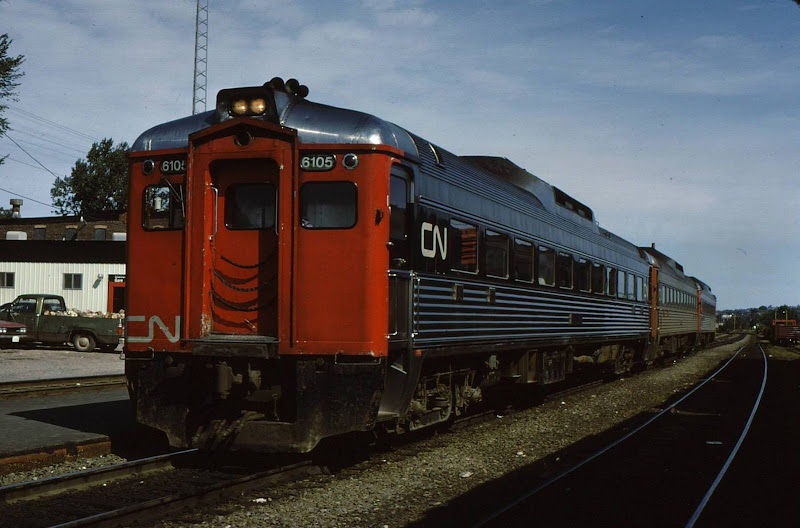 I had planned on taking CP’s Canadian from Montreal to Vancouver for the Domes and Park Car but when I made my reservation a month earlier all I could obtain was an Upper Berth…… the agent said he would place me on a wait list and he was sure I would eventually get my Roomette.

After arriving in Montreal early the next morning I walked over to Windsor Station to pick up my tickets but I still had an Upper Berth! I really didn’t want to spend the next three nights in an Upper so a change of plans…….back over to Central Station to see what CN had available on the Super Continental and yes they had a Roomette to Vancouver at 9:30 that evening. Cheaper too than CP and the agent even adjusted the fare as I had actually begun my CN trip on the east coast.

Now what to do for the extra 10 hours that I would be in Montreal (the Canadian had been due out at 11:30 am) It was a warm, clear fall day with the leaves at their peak and I couldn’t think of anything better than a quick round trip on the Adirondack. In the mid ‘70s the Adirondack was essentially a Delaware & Hudson train and a railfan’s delight with newly rebuilt Alco PA’s and most cars in D&H’s attractive paint scheme. Only a couple of Amtrak cars would show-up in each train. 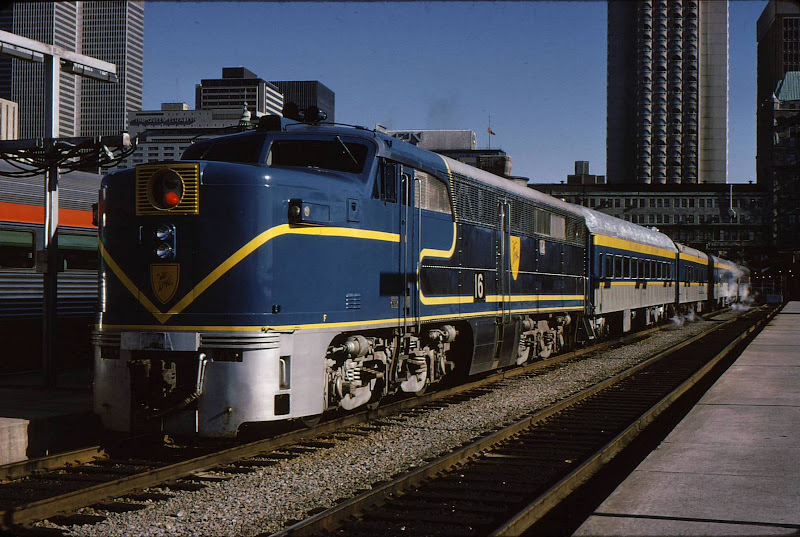 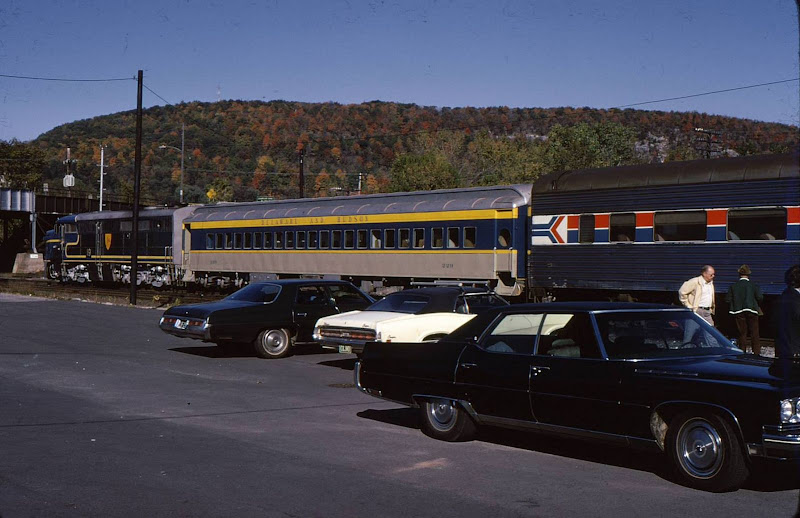 I could ride south to Whitehall, New York, make a quick connection to the northbound train and be back in Montreal in plenty of time for the Super Continental that evening. No advance planning required then to obtain a passport and you could make a spur-of-the-moment decision to cross the border. All you needed was your driver’s license…..there were so many railfans riding the Adirondack then all you had to say to Customs was: you were out for the train ride and you weren’t even given a second glance.

The Super Continental departed Montreal that evening and I had my Roomette for four nights on a schedule reminiscent of todays VIA Canadian (CP’s Canadian then was on a three night schedule) Early the next morning we arrived at Capreol to be combined with the section from Toronto to form an 18 car train. 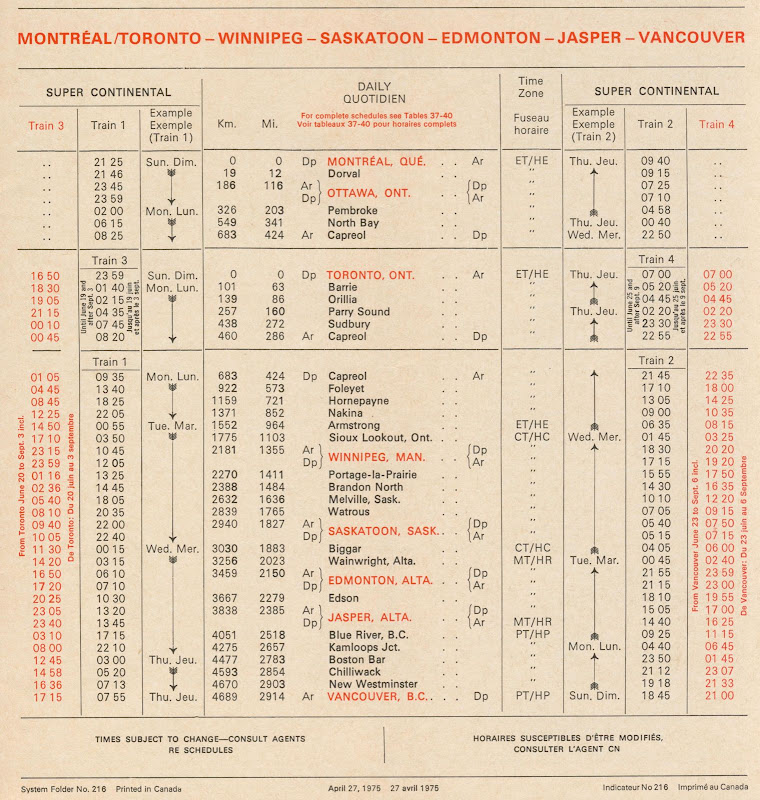 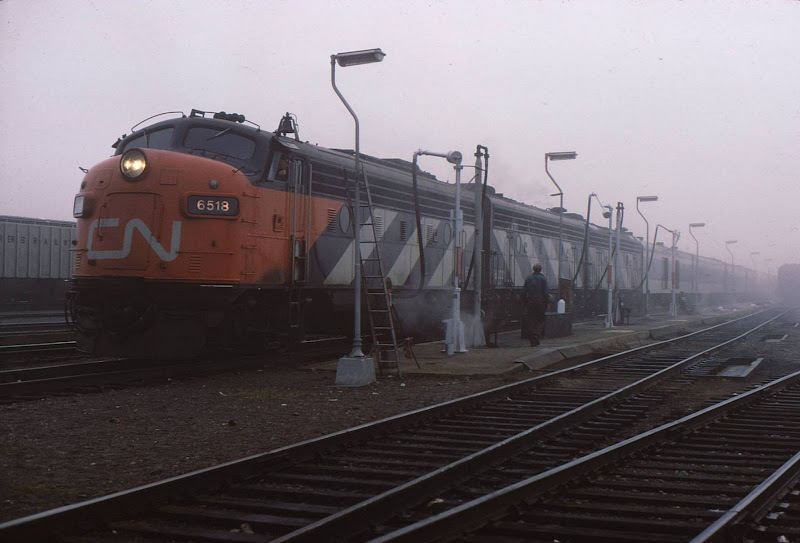 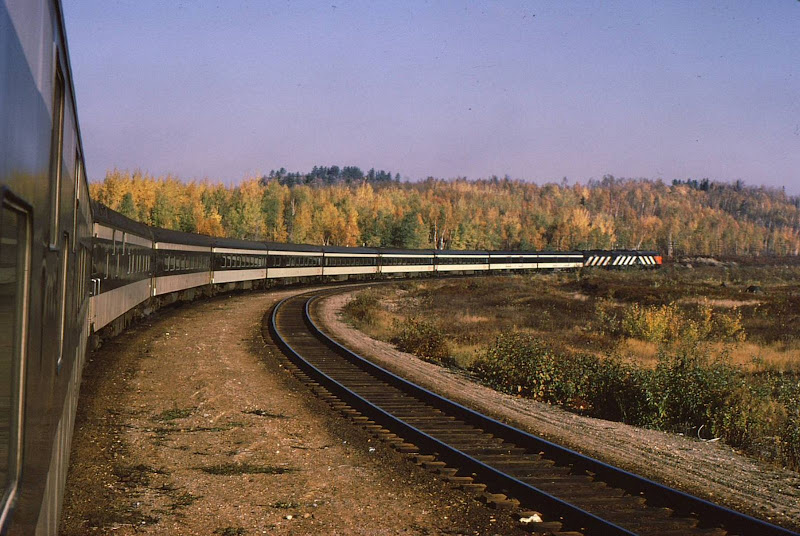 On the third day we arrived at Winnipeg. An old heavyweight lounge we had been hauling was swapped out of the consist to be replaced by a full length Sceneramic Dome (x Milwaukee Road) along with some other equipment shuffling. Then it was on across the prairies on another warm fall afternoon. 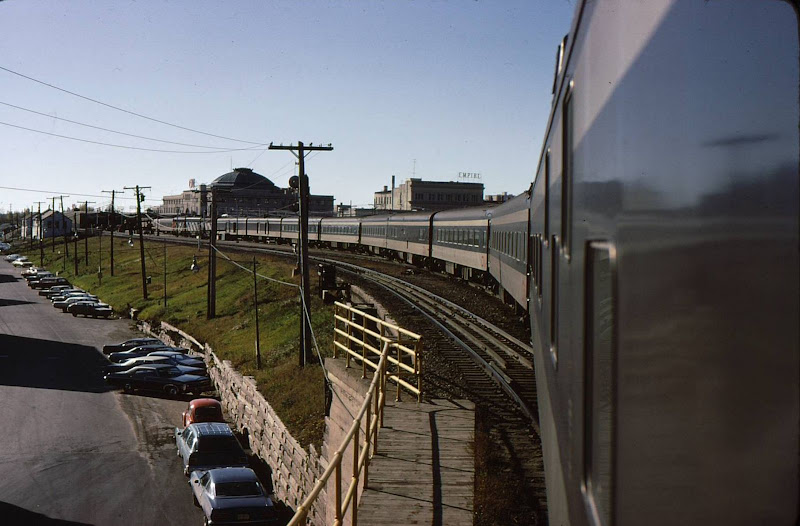 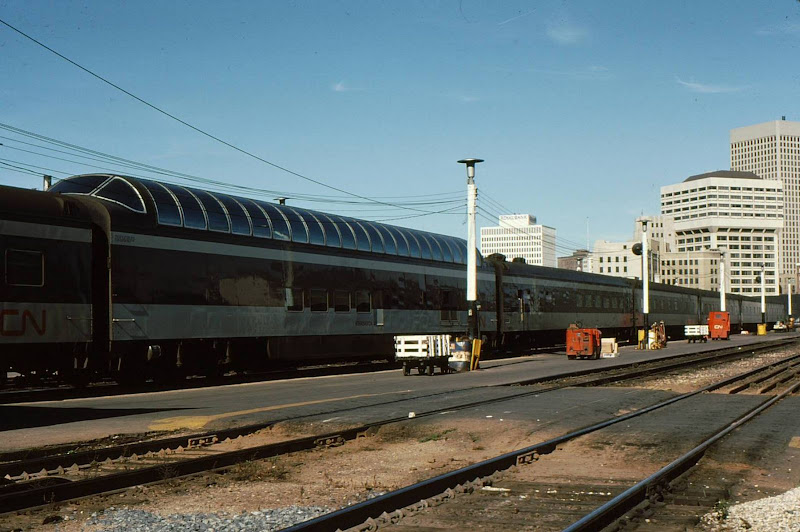 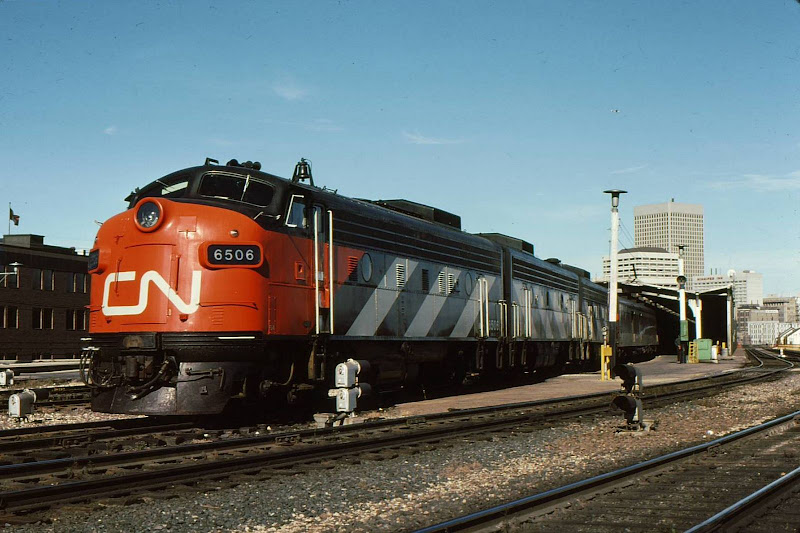 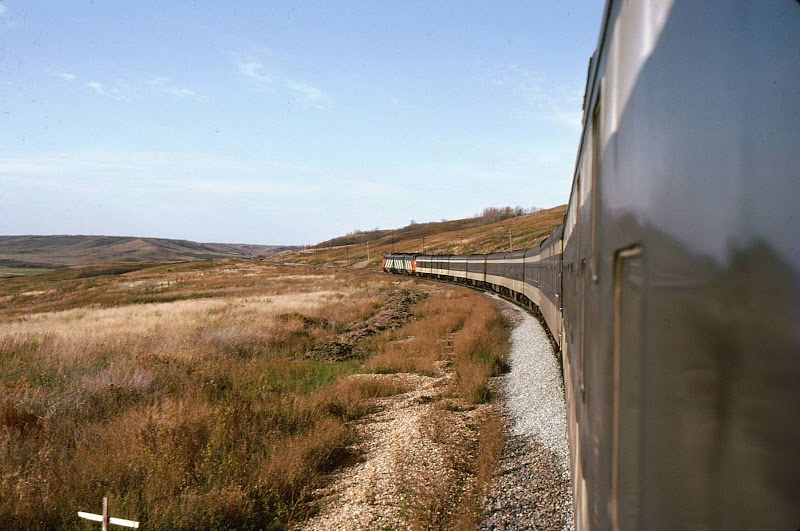 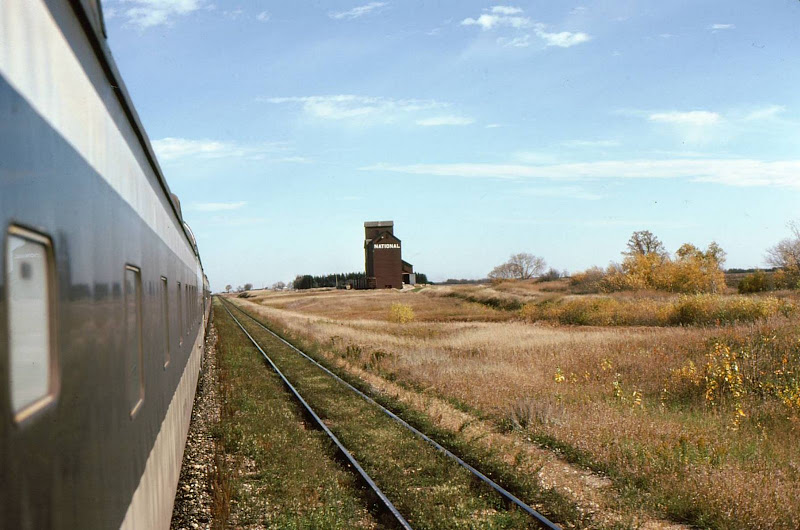 by NS VIA FAN
Sat Feb 20, 2010 7:15 am
Day four it was onto Edmonton and Jasper then into Vancouver the next morning. 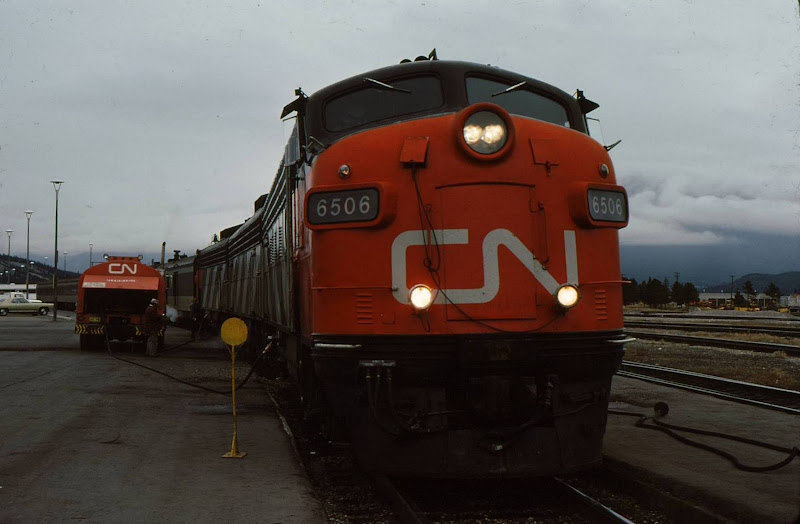 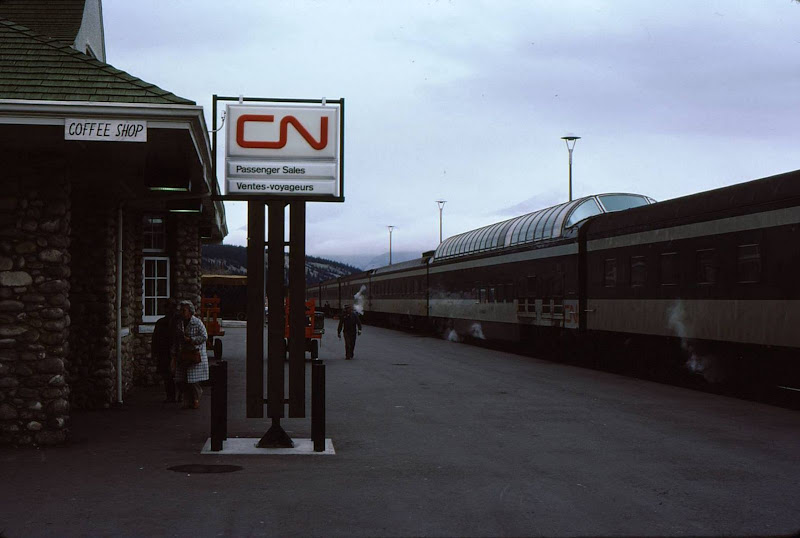 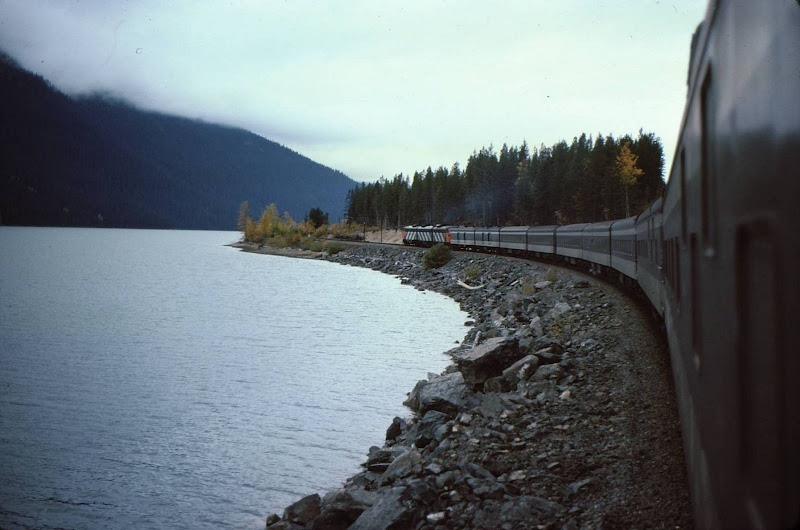 After a couple of days there I boarded Amtrak’s “Pacific International” for Seattle. Here it is at Blaine……I stepped off for a photo after we cleared customs. 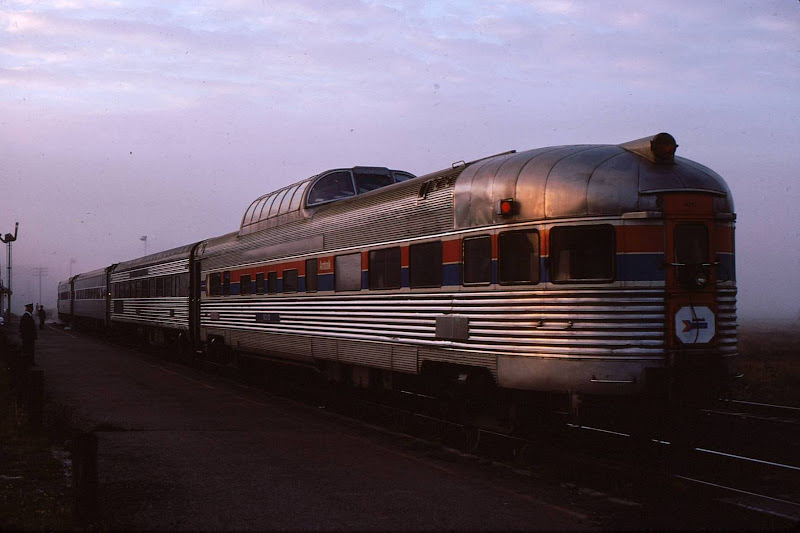 I was in Seattle only long enough to connect to the Coast Starlight. This was my first time to the US West Coast and I was looking forward to the scenery through Washington, Oregon and onto California the next day. Since I would be on the train only for one night, I decided to save a little cash and go coach. The train was several coaches long and not full at all so I had a double seat to myself. The Bay Area was quite foggy the next morning but once south of there we were into the California I had expected……sun and heat! It was a great afternoon rolling down into San Luis Obispo where we met the northbound Coast Starlight, then along the coast to Santa Barbara and onto Los Angeles. 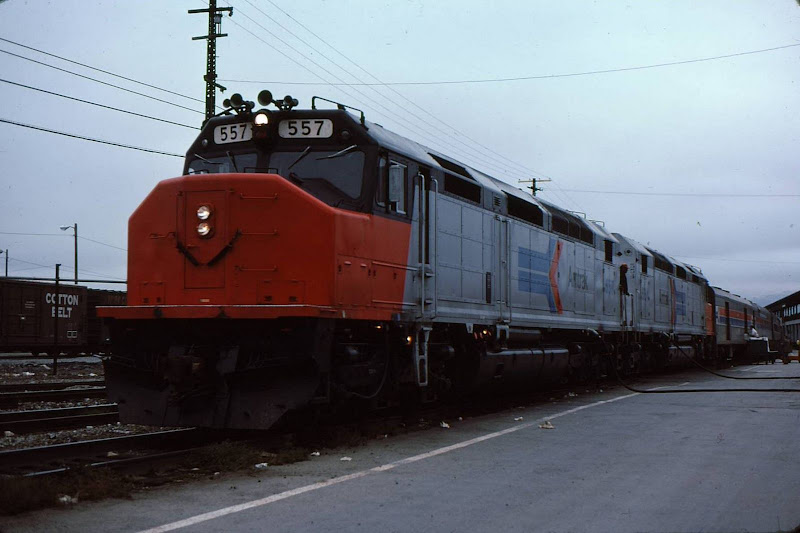 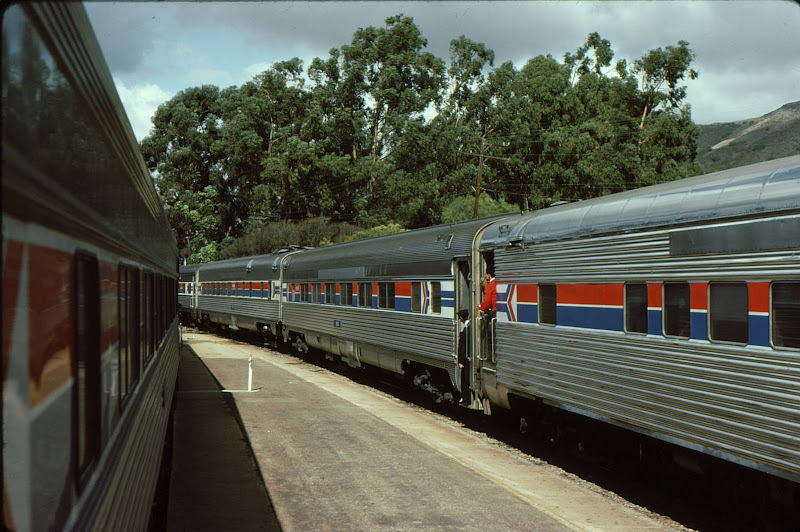 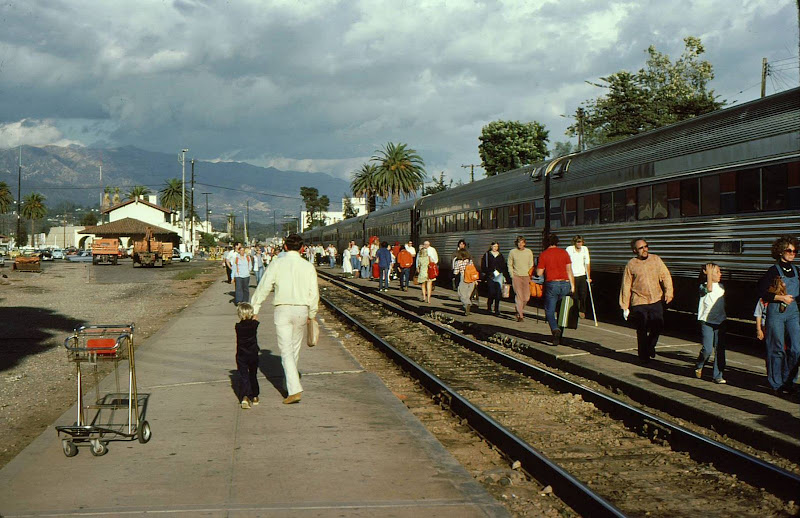 I spent a couple of days there doing all the tourist things and then on the last day, did a round trip to San Diego. I was taking the Sunset Limited out of LA that evening so caught the 4:30pm San Diegan back. 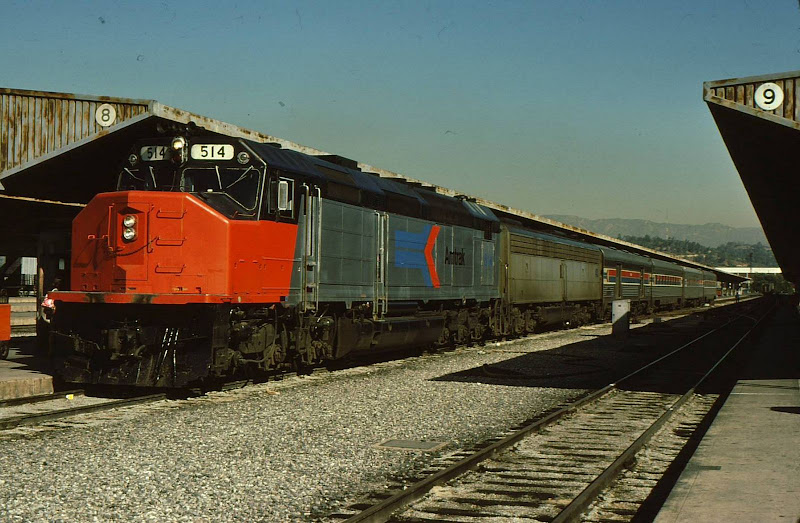 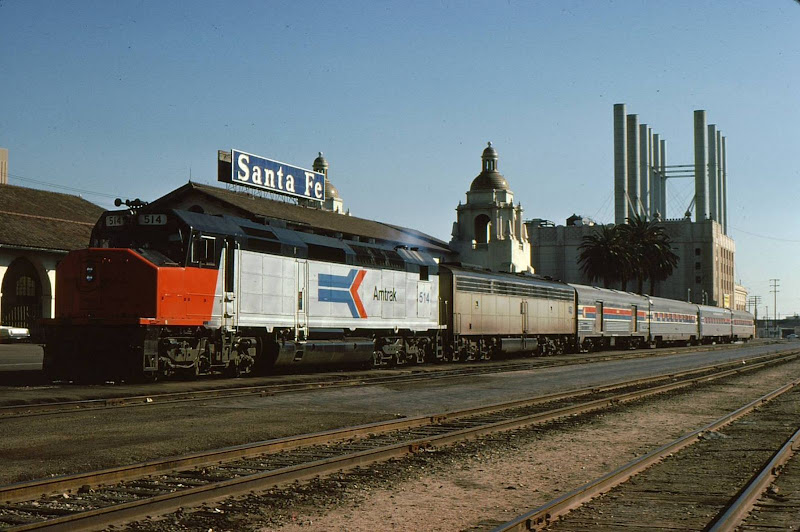 Rolling up the coast at dusk, all of a sudden there was a jolt and the train came to a quick stop……we had hit something! After a few minutes we were allowed to get off (and this was just along the track…..no station/no platform……I can imagine this being permitted now!) Wrapped around the front of our SDP40F was a Triple A Tow Truck. No injuries…..the driver had been out when we hit. 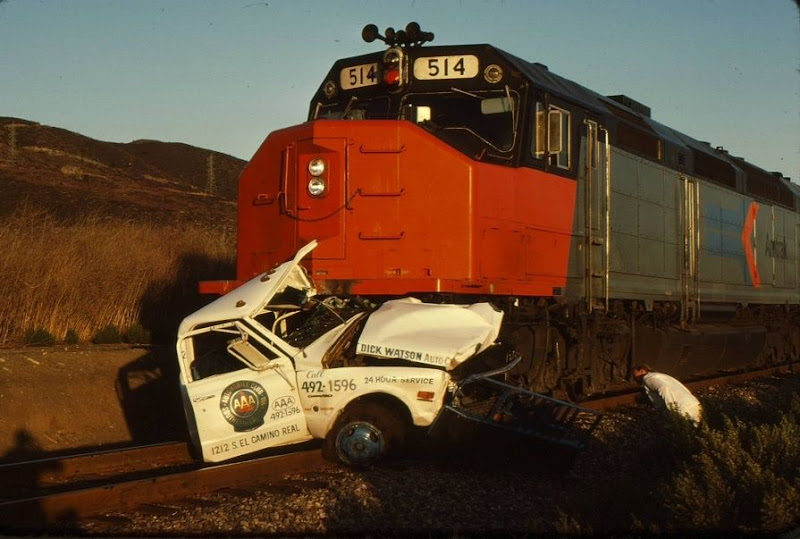 They brought in another tow truck to haul it off and after a two hour delay we were underway. I started to worry about my connection but the Conductor said the Sunset would be held as several others were connecting also.

by NS VIA FAN
Sat Feb 20, 2010 7:28 am
The Sunset Limited and a Roomette in the “Transcontinental Sleeper” was to have been the highlight of the trip. For a few years Amtrak operated a through sleeper from Los Angeles to New York (and for awhile, all the way to Boston) It was handled in the Sunset to New Orleans where it sat overnight (for occupancy) then was attached to Southern Railway’s Southern Crescent the next morning for Washington. On the last day Amtrak forwarded it onto New York.

……but what a disappointment when I entered my Roomette! The outer window pane had been replaced with “Lexan” and if anyone can remember these cars……After a few trips through the car washer, the lexan became so scratched and yellowed with age the windows were almost opaque. Leaving LA a bit late at 10 pm, all I could make-out were halos around lights and putting up the shade the next morning was no better……the views of the desert I had been looking forward too were non existent! A far cry from the clean glass windows on the Super Continental that were actually washed at a couple of station stops while crossing the country.

A visit to the dining car and breakfast put me in a better mood so I decided to make the best of it and found a seat in one of the xSanta Fe Hi-Level Coaches…..my first time in one of these. I spent most of my time here (and in the lounge) during the day, only returning to the roomette at night. 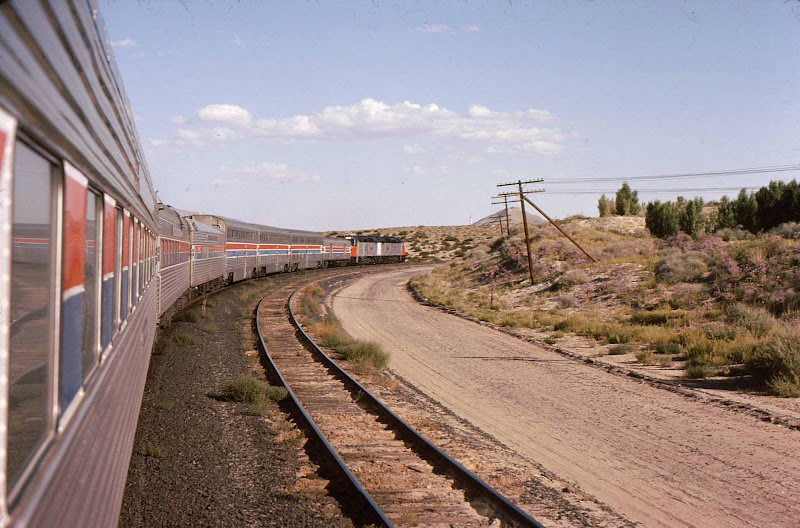 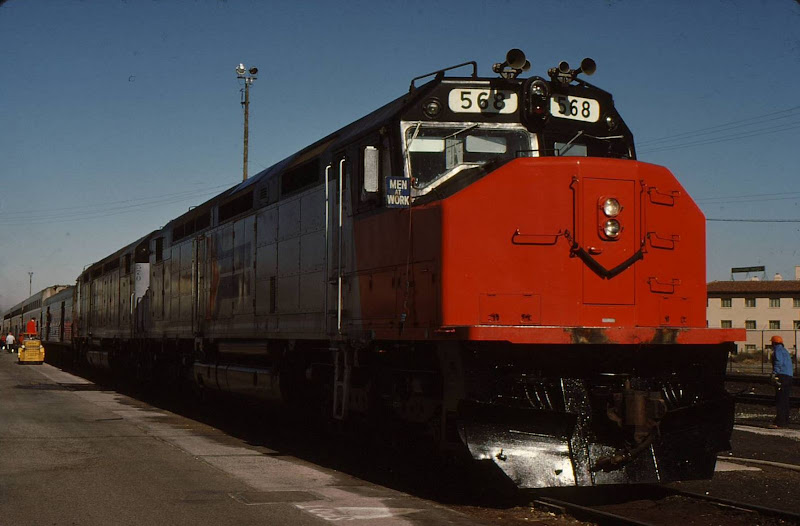 My sleeper was the last car and I remember we stopped for a meet out in the desert…..I asked the rear brakeman when he got off if I could step out too for a picture …..”sure, but watch for rattlers!” I enjoyed the desert scenery ……something I hadn’t seen before. A stop in El Paso where I could get off for pictures and then a nice shot of the sunset from the Sunset near the Mexican Border. 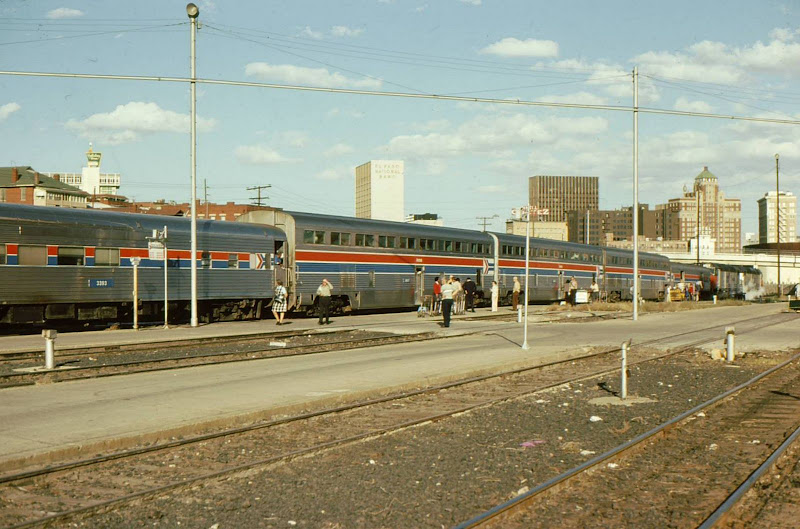 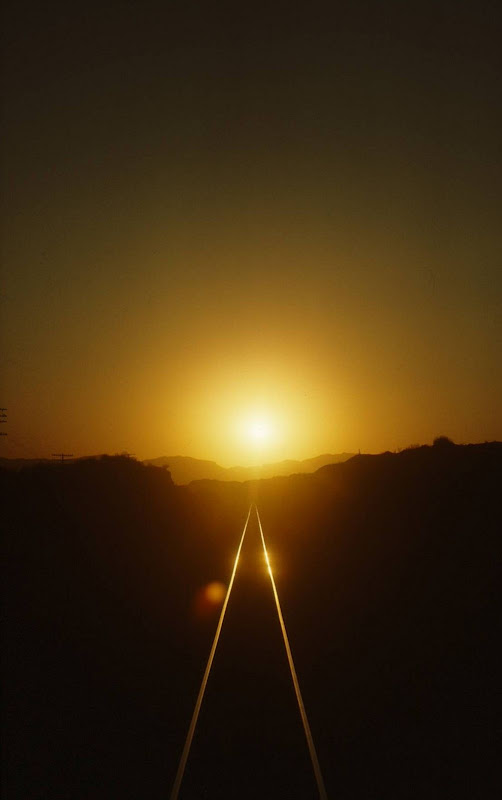 The next day was on across Texas and into Houston. 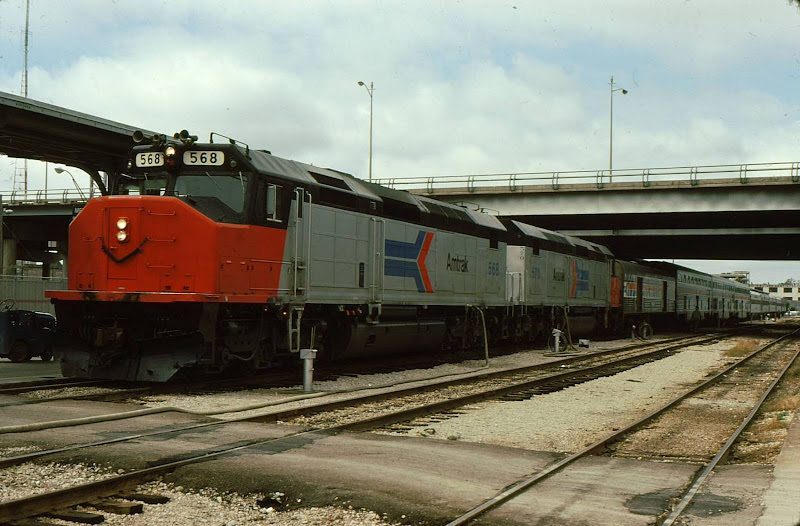 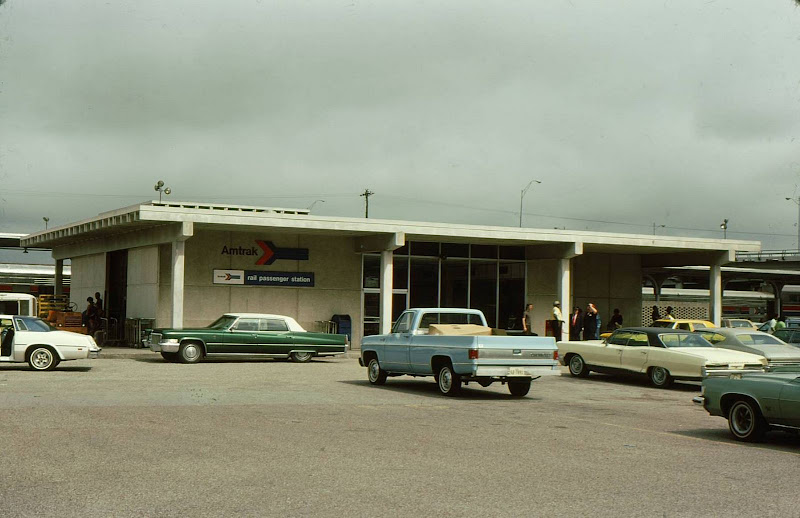 The third night out we arrived in New Orleans at 7:30 pm and as the sleeper was my Hotel for the overnight stop…… plenty of time to go out for dinner and a look around the city.

Just as I woke the next morning we were starting to move, now part of the Southern Crescent. The following photo is during the stop at Birmingham. 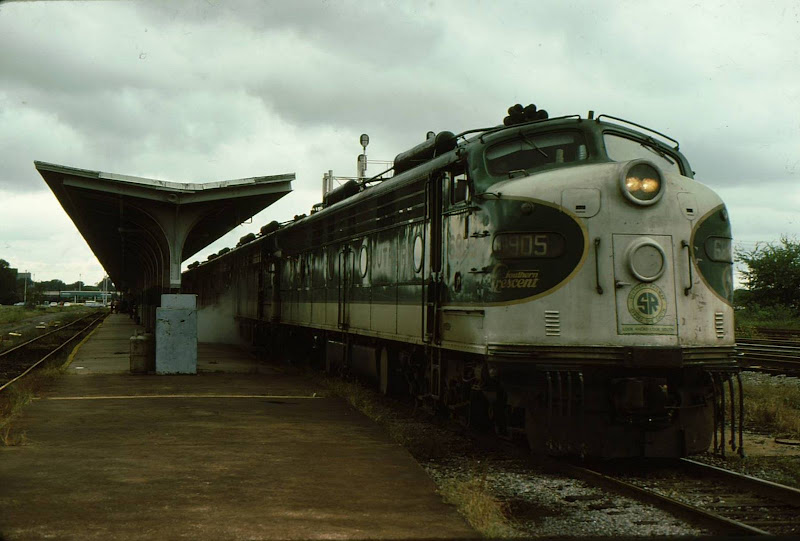 The Southern Railway had stayed out of Amtrak and continued to operate their own trains until 1979 when they joined Amtrak. The Southern Crescent even had an xWabash RR Parlour Dome running between New Orleans and Atlanta and again, certainly a better spot to be sitting for the view then in my Roomette. We stopped at Atlanta in the evening to pick up some cars then it was onto Washington for an 8am arrival the next morning.

I was leaving the Transcon Sleeper here and not continuing onto New York. I spent the day touring the city……Monuments, The Smithsonian, riding the Metro etc then was back at Union Station for the 5pm departure of the Montrealer. This was my last night on the train and I would be home tomorrow afternoon so decided to save a little and just travel coach. After the coaches thinned out a bit in New Haven, I had a double seat to myself. 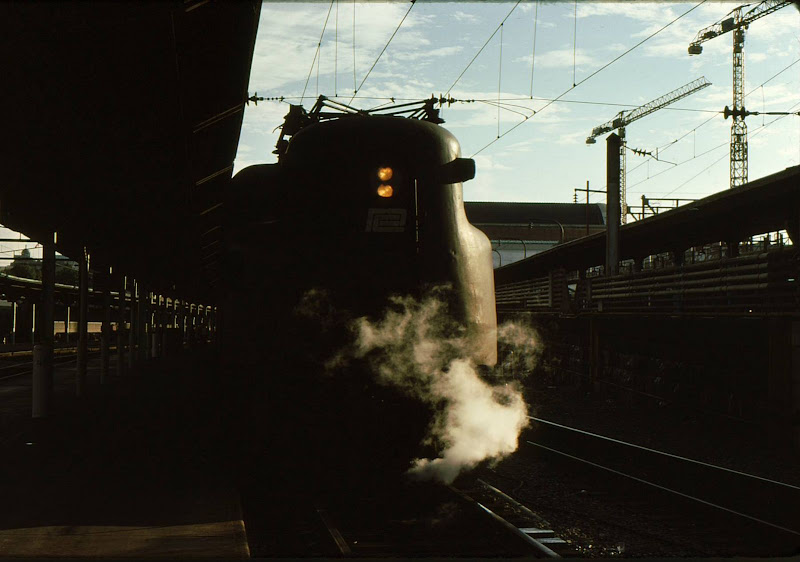 I arrived back in Montreal on a Sunday morning……two weeks since I set out on my trip. I had to be at work the next day so it was out to Dorval and a quick 70 minute ride home to Halifax on an Air Canada L-1011. 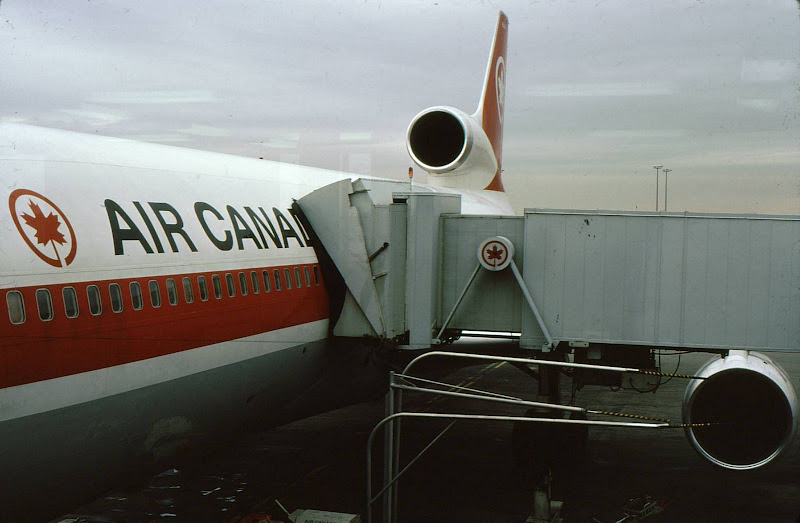 by 3rdrail
Tue Apr 06, 2010 12:45 pm
Terrific job and story ! Thanks for bringing it to us !
~Paul Joyce~
Moderator: Toy Trains, Model Railroading, Outdoor and Live Steam
Paul Joyce passed away in August, 2013. We honor his memory and his devotion at railroad.net.

by Alloy
Sat Jul 10, 2010 3:13 pm
You really did a good job of presenting all that--thanks for posting it. Really liked that sunset shot near the Mexican border.
Farrell Wills