My opinion here is that Tom DeLay will try to use this as an excuse to end this. However, the Houston Metro should contact the Long Island Rail Road for pics of deadly accidents to place on their buses and trains to scare the city straight. (A pic of a young woman and her kids killed because the mom drove around lowered gates to get hit by a LIRR train at 80 mph should scare people, and rightly so, in my view.)

Username
AMoreira81
by txbritt
Wed Jun 01, 2005 4:41 pm
They should shut it down. Not because of safety issues concerning cars pulling out in front of the train, but because NO ONE uses it.

txbritt wrote:They should shut it down. Not because of safety issues concerning cars pulling out in front of the train, but because NO ONE uses it.

I assume that 32,800 riders per weekday must be your definition of "NO ONE".

Username
N.Y. State Of Mind
by txbritt
Thu Jun 02, 2005 7:15 am
33000 riders a day in a city of close to 4 million ain't much. Point is, the lightrail isn't doing what it was designed to do, which was to help alleviate Houston traffic. Are you a Houston Citizen?

How about if you compare that ridership number to the population of the specific corridor it serves, along with the number of jobs along said corridor? You can't compare the population of an entire city/county, especially one as sprawling as Houston/Harris County, to a single 7.5 mile "starter" line. Oh yes, 33,000 daily riders is pretty good for a single light rail line of its length, regardless of what city it's in.

Besides, that line is the first part of a regional light/commuter rail system, and more of the Houston/Harris County population will therefore get to ride the light rail system in the coming years: 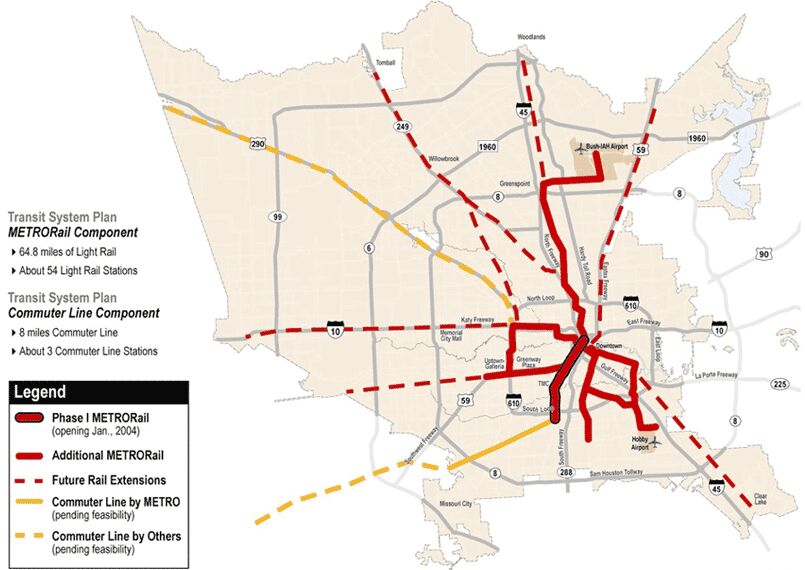 txbritt wrote:Point is, the lightrail isn't doing what it was designed to do, which was to help alleviate Houston traffic.

So, can highways do any better? Highways, and any other attempt to increase road capacity, encourage traffic, while light rail dosen't. Sure, light rail will encourage some people to drive to Park-and-Ride lots, but those same people would have otherwise drove downtown. For as long as there's going to be population growth, the best that can be done is to minimize traffic congestion growth as much as possible. That includes building alternatives to highways, like light rail, which reduce mobility congestion. Short of depopulation of a given area, there is pretty much nothing that can be done to decrease traffic congestion.

No, but I'm quite familiar with light rail technology, its benefits, and its impacts.