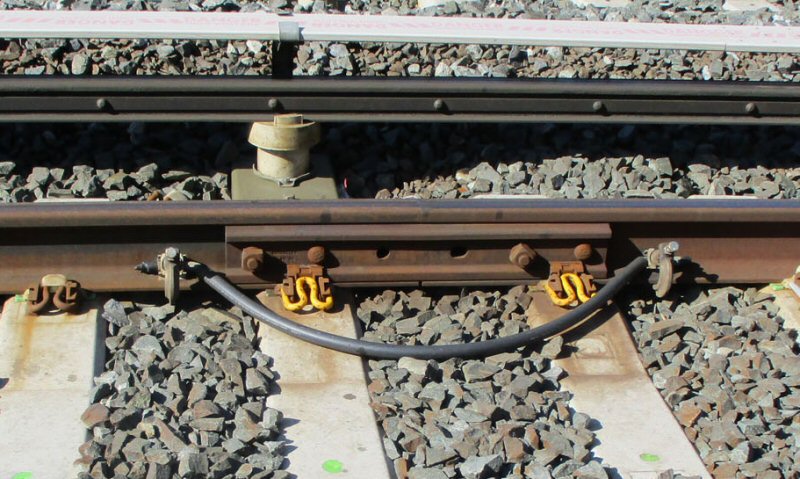 Perhaps this item can be explained for civilians and LIRR modelers? Thank you. Steve
Steve Lynch
Long Island Rail Road :: Trains Are Fun

by BuddR32
Thu Mar 25, 2021 1:08 am
Hi Steve,
The bonding jumpers are so there is a sure electrical connection between the two sections of rail. As you likely know, the 3rd rail return and signal track circuits use the running rails. the joint bar is deemed not a significant enough connection for the circuits, so there is that bonding jumper.
Very likely that is temporary, and will no longer be necessary when the rail joint is replaced by welding the two rail sections together.
In the days before welded rail you'd see a few smaller gage uninsulated wires bonded by weld to both sections of the rail rather than the clamp you see in that photo.

In electrified territory, the rails provide the return path to the substation for the 750 volts. That path is also provided through the ground, or the earth. While the ground will easily provide a return path, the rails do it better and assuring their continuity with good bonding reduces current losses and protects buried utility pipes from corrosion caused when they become a path to stray power. Rail bonds in electrified territory are very thick, to accommodate the high propulsion current loads.

On non-electrified track, thinner bonds are used, and the only power path is signal current, which is generally low voltage and amperage. Each signal "block" is a segment of track, separated from the next block by insulated rail joints. The insulated joints are made with a fiber or plastic sleeve between the rail ends and connecting bars. Signal power, generally from a battery, is fed into the rails at one end of the block and is received by an electromagnet relay at the other end. In this manner, a broken rail or bond anywhere in the block can be detected. When an axle shunts the two rails, it shorts out the battery, deactivating the electromagnet. The relay "drops," displaying the proper signal aspect in the adjacent blocks.

A broken track wire generally causes a "stop and proceed" signal aspect to be displayed. Thus the portion of the aspect's definition "...and watching out for broken rail..."