Doesnt look like any fatalaties .
Moderator worldwide railfan , Rail travel & trip reports
The only train trips I regret are the ones I didn't take.

Username
David Benton
Posts
9344
Joined
Thu Mar 11, 2004 11:29 pm
Location
New Zealand
by David Benton
Wed Nov 17, 2004 12:03 am
well ,the NZ herald is pleased to report that a Nz family were not hurt at all in the train crash , in which so far noone has died . I cannot understand the medias fascination with train crashes , even when there are no Fatalaties . This crash has been given as much coverage as the massacare in Falluja , and given more coverage than the numerous road deaths in Nz and Australia in the last few days .

http://www.nzherald.co.nz/storydisplay. ... tion=world
Moderator worldwide railfan , Rail travel & trip reports
The only train trips I regret are the ones I didn't take. 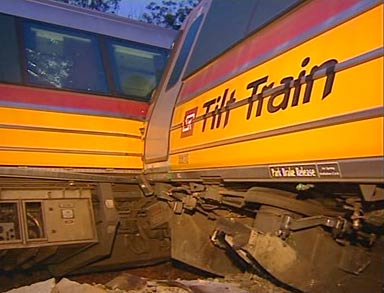 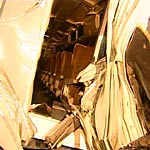 Tilt Train was speeding, QR says
Police and Queensland Rail (QR) have confirmed that the Tilt Train involved in a derailment in central Queensland this week was travelling more than 50 kilometres per hour above the speed limit when the accident happened.

The Tilt Train came off the tracks north of Bundaberg early Tuesday morning, injuring 120 people on board.

In a joint statement, police and Queensland Rail say the train was travelling at 112 kilometres per hour along a section of track where the limit is 60kph.

"I believe that the train was travelling in excess of the speed for the 60 kilometre per hour curve," he said.

"That's a view that we've ascertained from looking at some of the information that has come through. Clearly the event recorders are absolutely crucial in determining that speed.

"Just from the observations when you look at where the train is and that sort of thing, you sort of form a view that speed was a contributory factor.

"I don't know to what extent. I'm not going to speculate. I'm just going to be honest with you and say that's an obvious thing we are considering."

Mr Scheuber says it is not known for certain if speed was the only cause of the crash.

"At this stage we can't be absolutely sure of that," he said.

"It would be one of the contributing factors. I can't be absolutely sure as to whether speed alone has caused that. I'm not discounting that it could be speed alone, I just don't at this stage know."

Mr Scheuber says Queensland Rail has not yet taken any statements from the two drivers, one of whom is still in hospital.

He says there are a lot of factors for investigators still to consider.

Queensland Transport Minister Paul Lucas is disturbed by the news that speed was a factor.

"I'm concerned to hear about that but of course we have independent investigators and we want to let them do their job," he said.

"That's why the Queensland regulator invited ... a Commonwealth-state investigation and I'm concerned with the accident full stop.

"I want to see what the answer is and have a look at some solutions when the report comes out."

Username
Jam>s C/
by David Benton
Wed Nov 17, 2004 2:22 pm
thanks for the links , James , and welcome to our forum .
Certainly looks like speed was a factor , form the way theyre piled up .
But that 60 kph would be the speed limit for ordinary trains wouldnt it ? the tilt train speed limit may have been higher , but not that much higher .

david
Moderator worldwide railfan , Rail travel & trip reports
The only train trips I regret are the ones I didn't take.

David Benton wrote:thanks for the links , James , and welcome to our forum .
Certainly looks like speed was a factor , form the way theyre piled up .
But that 60 kph would be the speed limit for ordinary trains wouldnt it ? the tilt train speed limit may have been higher , but not that much higher .

Certainly spped looks like a factor, it's a shame this train is one of the most luxury train in Australia, now looks like several will be written off.

Username
Jam>s C/
by David Benton
Thu Nov 18, 2004 2:52 am
Please do , James , especially from Australia , ( I'm a kiwi ) .
we dont have a regular contributor from Aussie at the moment , so that would be good .
If you know anything about the philbara locos , i know theres quite abit of interest in them .

i was hoping to ride the tilt train in feb or march , sposed to be some cheap nz - auss air fares coming up then .
Moderator worldwide railfan , Rail travel & trip reports
The only train trips I regret are the ones I didn't take.

Allow me to also welcome you to our little corner of the forum.

"we dont have a regular contributor from Aussie at the moment , so that would be good ."

Yes, please! Also, if there are any other Ausies out there who wish to contribute, please feel free!


If you know anything about the philbara locos , i know theres quite abit of interest in them .

If you need to ride on tilt train, try the Rockhampton or the Bundaberg service for 2005, the Cairns-Brisbane diesel tilt train will be out of service for quite some time in the future. The electric tilt train service to Bundaberg is not affect by the accident, Rockhampton one will resume once the line clear for traffic.

If you need to go anywhere north of Rockhampton, change to Sunlander at Rockhampton for further north.

Username
Jam>s C/
by PClark
Sat Nov 20, 2004 5:09 pm
As of now the second Tilt Train is running two of the three weekly scheduled trips between Brisbane and Cairns.

One of two weekly Sunlander loco-hauled trains that formerly terminated at Townsville has been extended to Cairns.

Hence, there are still five weekly services between Brisbane and Cairns.

What is awaited is news as to whether the derailed Tilt Train cars are able to be repaired or will have to be written off.

Best option, if you can afford it, is Queenslander Class sleeper on the Sunlander which includes dedicated lounge and diner and includes cost of meals. This runs twice weekly. I am unsure as to whether the extended Sunlander mentioned above will include Q Class.

Username
PClark
by David Benton
Sat Nov 20, 2004 9:16 pm
Thanks Peter , and welcome back to the forum . My girlfriend has freinds in Gladstone , so we'll probably Tilt train it to there , then Sunlander up to Cairns . we'll have to see if the queenslander class fits the budget ,will probably go for an ordinary sleeper .
Moderator worldwide railfan , Rail travel & trip reports
The only train trips I regret are the ones I didn't take.

There are winners and losers in this. There are as many trains and more seats and berths to Cairns but a reduction of one train a week between Rockhampton and Townsville. The expansion of Queenslander Class from two to three per week is to be applauded (assuming the QR website is correct)

David, I personally would only spend the money for Q Class if making the whole journey when it is like a mini cruise. If joining at Gladstone I would opt for an ordinary First class sleeper.

Username
Guest
by hsr_fan
Sun Dec 19, 2004 10:51 pm
Does anyone know if the severely injured crew member(s) pulled through?

Username
hsr_fan
by PClark
Mon Dec 27, 2004 5:00 pm
There were no fatalities in the end and, as far as I know, all injured are now out of hospital.

Username
PClark
by David Benton
Sun Aug 14, 2005 6:20 am
any up dates on the status of the tilt train service . Is the travel train site up to date ?
I have tried to book from Brisbane to Gladstone on the 9th of september , on the 11.00 a.m train , but the booking service put me on the 5pm train . will have to ring them tomorrow to sort it out .
i only have a week , to get form Sydney to Cairns , so will probalby fly back from Cairns to Sydney .
Moderator worldwide railfan , Rail travel & trip reports
The only train trips I regret are the ones I didn't take.